A group of students from the School of Interior Architecture & Design (IAD) sat down for a Q&A session with Collin Burry on Wednesday, Sept. 19 at 601 Brannan. The venerated designer shared valuable advice for producing your best work as an interior designer.

Burry is currently a design director and principal at Gensler, the highest-valued interior design firm in the United States. Burry honed his interior design skills at Woodbury University before taking the reins of several high-profile projects, like Terminal 2 at San Francisco International Airport (SFO) and Airbnb HQ at 888 Brannan.

IAD Capstone Coordinator Tom Collom introduced Burry as an interior design “rock star” before reading a glowing bio sent from Burry’s assistant. The bio described him as “a humanistic modernist … Collin describes himself as both a left- and right-brained designer, who creates environments that reflect his clients’ ethos while striving for originality, authenticity, and strategic, intuitive functionality.” 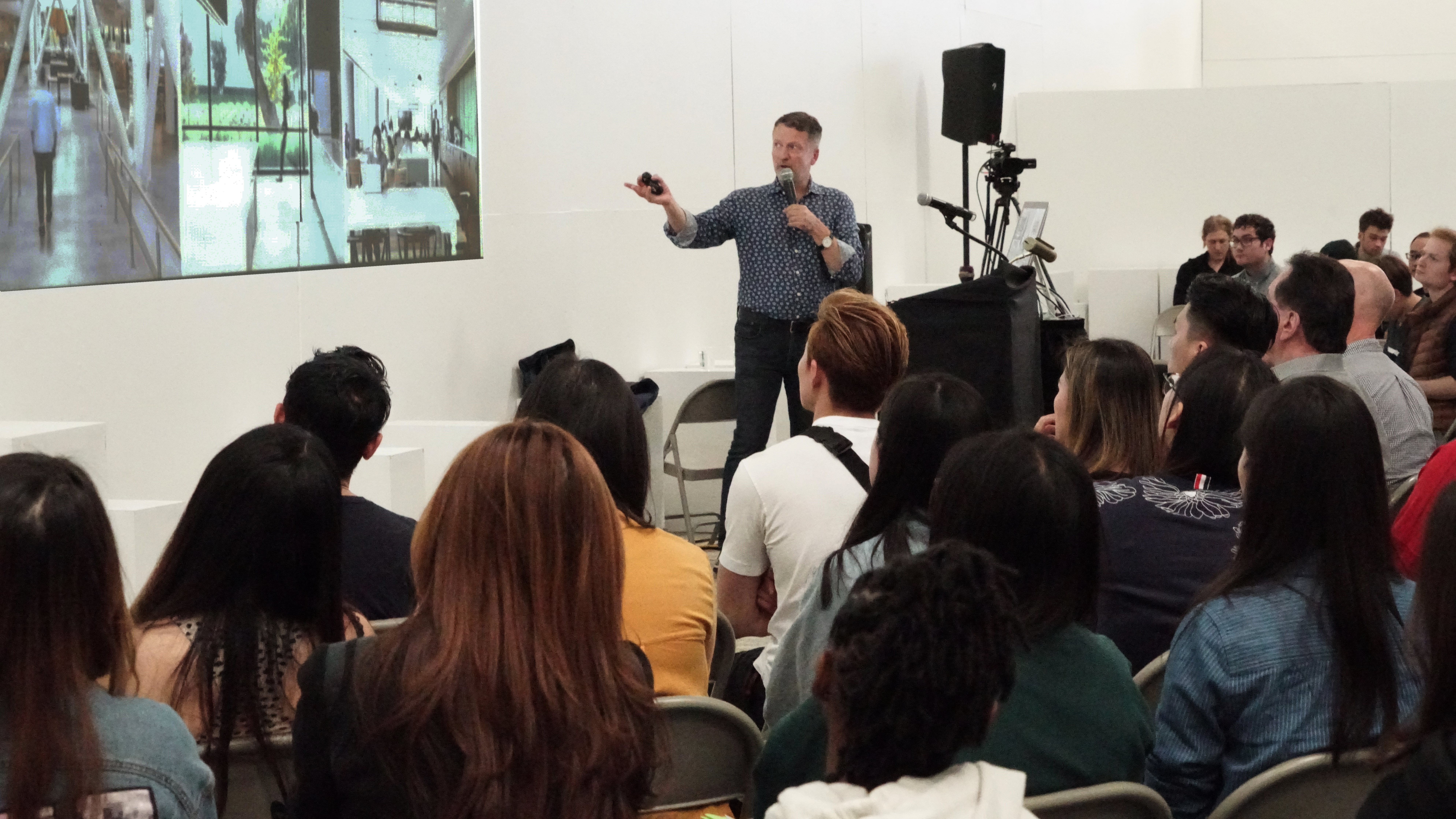 Burry is a member of Interior Design Magazine’s Hall of Fame and San Francisco Magazine’s Top 100 Most Influential LGBTQ Leaders in the Bay Area. Photo by Bob Toy.

Burry thanked the Academy for receiving a CIDA accreditation, saying, “It’s really, really important. Our profession has fought for a long time for being recognized as professionals. I feel like we’re fighting it here.”

He credited some of his recent success to Gensler’s open-minded work environment. “My mentor at Gensler always said that Gensler is a platform for people to pursue their personal passions. I think that’s really true,” Burry reflected. “I think the things that I’ve learned there is that really you can have a self-guided career, and that’s something we should all think about. For me, it was a place where dreams can come true.”

Environmental safety is a huge concern when designing the interior of buildings and sourcing materials to do so. Describing his attitude towards design, he affirmed that he’s “a major proponent of strategy and research, and resilience, which is sort of a new, fancy word for sustainability. The planet, some would argue, maybe isn’t resilient, but it should be.” According to Burry, a lot of his environmental focus, and design work, in general, is driven by the hope that “If we do things right, things can self-repair.” 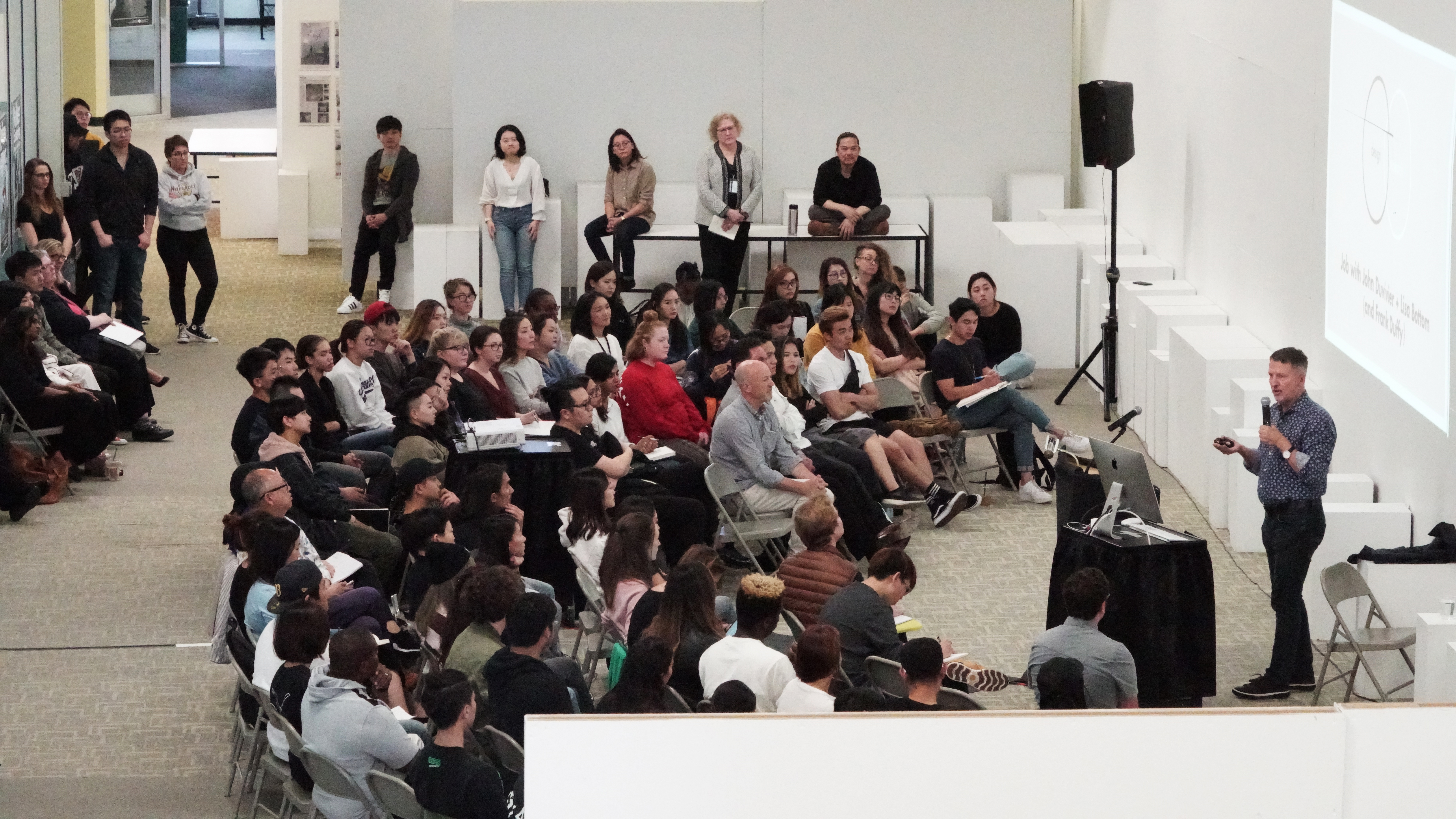 He also reminded students of the importance of the interior design profession, especially considering the massive, ever-increasing amount of time we spend indoors. “Remember that we’re making the world a better place,” Burry reminded. “We’re making the world a better place to work, to stay, to travel, to learn, to eat and to play, and ultimately, we want to do that responsibly, because we can also have a big effect on the environment if we’re not careful.”

In our ultra-connected digital reality, or as Burry puts it “our Pinterest world” of “ubiquitous information,” inspiration is often easier to come by than originality. It’s easier than ever to find other peoples’ work, but that means interior designers need to work harder to differentiate their own work from similar designs made by their online, global peers.

“Pinterest is a good tool, but it’s not the only tool,” Burry said. “Art, ballet, fashion, nature. Use other sources of inspiration, because if we don’t collectively strive to be original, why would our clients pay us to design?”

In a lot of cases, the clients themselves serve as a source of inspiration. According to Burry, clients “oftentimes have the most amazing ideas in almost every single one of our projects. There’s something in them, some brilliant ideas that came from the client and not from us.” It’s hard to mess up the imperative goal of doing “what’s right for the client” when they are contributing their own outstanding ideas.

For designers of all experience levels, Burry drove home a list of important qualities to aim for, which included “excellence, functionality, sustainability, requirements, design, execution, detailing, and overall look and feel.” He acknowledged that it takes time to master all of these design facets. “Be a sponge the first few years of your career,” he added, after advising like a patient mentor, “You have a lot of time to figure these things out.”

The Power of Collaboration