Four Academy alumni bridged the gap between academia and the professional world once more, to share their experiences and advice with School of Interior Architecture & Design undergrads

The School of Interior Architecture & Design (IAD) kicked off their fall speaker series on Monday, Sept. 17, with a Q&A panel featuring four alumni at 601 Brannan. The discussion covered a breadth of topics, including transitioning from school to the workplace, finding internships, and applying for Optional Practical Training (OPT) and work visas. The speakers were chosen from a variety of interior design firms, all with offices within a 20-minute walk of an Academy of Art University campus.

Speaking on the alumni panel was Lena Pham, a junior designer at Hirsch Bedner Associates (HBA); Kevin Chung, a junior designer at BAMO; Kiko Singh, principal at Brayton Hughes Design Studios; and Antonio Martins, founder, and owner of Antonio Martins Interior Design. They represented different sized firms, from small to medium to large, as well as lived experiences and specialties.

Pham’s firm, HBA, is the largest interior design/architecture firm in the world that specializes in hospitality. “I’m working on projects in Mexico, a lot of hotels and resorts,” Pham said. “They also have residential projects, but like really, really big residences or condo buildings. That’s mostly what we do.” 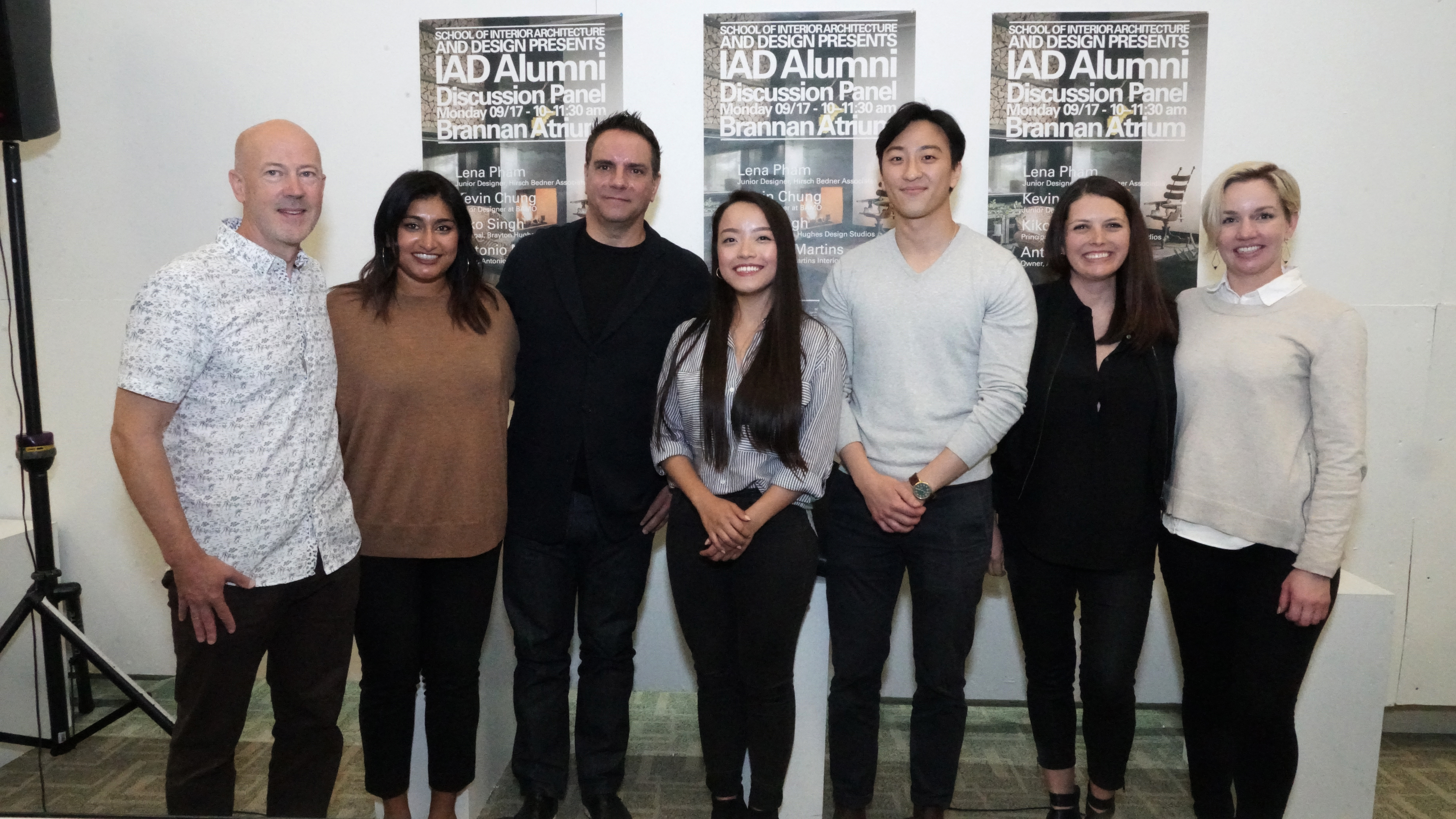 “When I had my own firm, and this is good for all of you, most the people I hired were from Academy of Art,” Collom recalled, addressing an audience of inquisitive Academy students. “I felt you all were very well-prepared to just sit down on the first day of work, and just get to work.”

Martins worked in hotel management with Hyatt International for 13 years before enrolling in the Academy. He “always wanted to be a designer,” but had to overcome a stigma from his upbringing. “Good boys, Catholic boys, cannot be designers,” he recounted. “Well, they can, but back then it was a little difficult.” Martins started out at Hyatt as a waiter, but eventually advanced to “the head office” in different hotels, “many in Asia and Hong Kong.”

After graduation, he was initially hired at a firm where he was often yelled at, an experience that spurred Martins into starting his own business: Antonio Martins Interior Design. The company went from mainly operating through Craigslist with the modus operandi, “Whoever pays, we will take the job,” to selecting their own clients.

The success of Martins’ firm is disproportionate to its size. “We are a small firm, we are six people. The maximum we’ve gone up to is 15,” Martins said. “For me, the good number is six.” All of the employees have the same position: “designer.” According to Martins, “everyone does basically everything. From taking out the trash to cleaning the pantry, to designing.”

His four ingredients for interior design success are: “business card, portfolio, computer, and an attitude.” Collom added, “A good attitude.” However, to Martins, “If you have a beautiful portfolio, 90 percent is there.”

The necessity of speaking English, and the challenges of working in the U.S. as a non-native English speaker, was another central topic of discussion. Chung, who has “a lot of international friends that are not as fluent in English” like him, said, “it’s that your level of efficiency in English does not matter, as long as your attitude is there. I’ve known a lot of students that were so scared, they didn’t even go out and challenge themselves, and that’s what didn’t help them to get an internship or a job. The ones that I did see that were thriving in a work environment were the ones that were eager to get into that environment.” 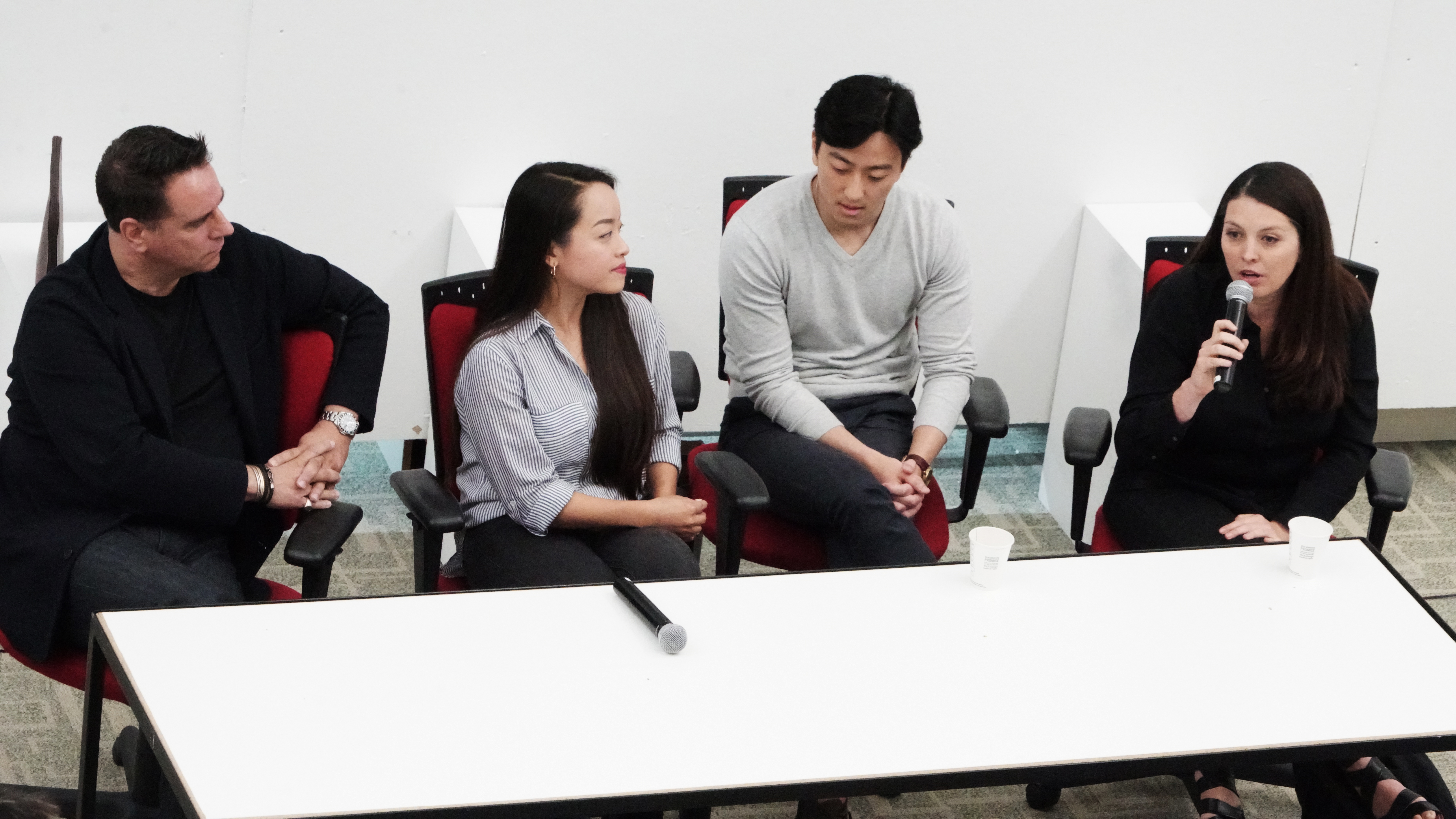 All of the speakers emphasized the importance of building and maintaining a solid foundation of professional contacts through networking. Cultivating relationships with classmates, instructors, fellow interns, or employers can help advance, diversify, or complement any career.

“I think what’s really unique about San Francisco, especially the hospitality industry, is that we’re a really tight-knit community,” Singh said. “I’m friends with all the other principals from all the other firms. It’s not like this really catty competitive atmosphere, we’re all very supportive. There’s plenty of work to go around.”

According to Singh, it’s important to keep “your network of who you’re sitting with today, and who your friends are.” One of her closest friends from the Academy is also a successful interior architect, in Chicago. “I get to call him and talk about projects, so it’s really exciting that we used to sit together in the computer lab,” she recalled.

Singh also recommends participating in events organized by the San Francisco chapter of NEWH, the Network of Executive Women in Hospitality. It’s a nonprofit group, “the kind of organization to start to teach you about leadership and networking. The events are all free to students, you just have to sign up and have a student membership,” Singh said. Every year, the San Francisco chapter alone raises around $40,000 for hospitality industry scholarships. NEWH even has a student board seat, which Singh occupied for two years as the organization’s programming director.

However, even small acts of kindness can make an outsized difference when networking. Pham landed her first interior design internship after fetching her future boss a bottle of water while he was fixing a chandelier at an IAD event. Now, she’s working at the world’s largest hospitality design firm, and her first job in college was in a small fabric showroom. “So, just don’t be afraid,” she summed up.