The sixth annual Veterans Art Exhibit was rife with active duty servicemen and honorable veterans during its opening reception on Friday, Oct. 5 as it paid tribute to its men and women in uniform not only for their service but also their capabilities as expressive and talented artists. Though mostly a cause for celebration, the exhibit was one of remembrance and healing for members of the Veterans Home of Yountville following the fires and shooting experienced earlier in the year.

“Art is such an expressive way to really reflect and to kind of give your energy into something and have a clear focus,” said Jennifer Brusstar, CEO of the Tug McGraw Foundation, a nonprofit located within the Yountville home, which encouraged its residents to create art to cope. According to Brusstar, over 10 pieces at the exhibit are a result of that effort. 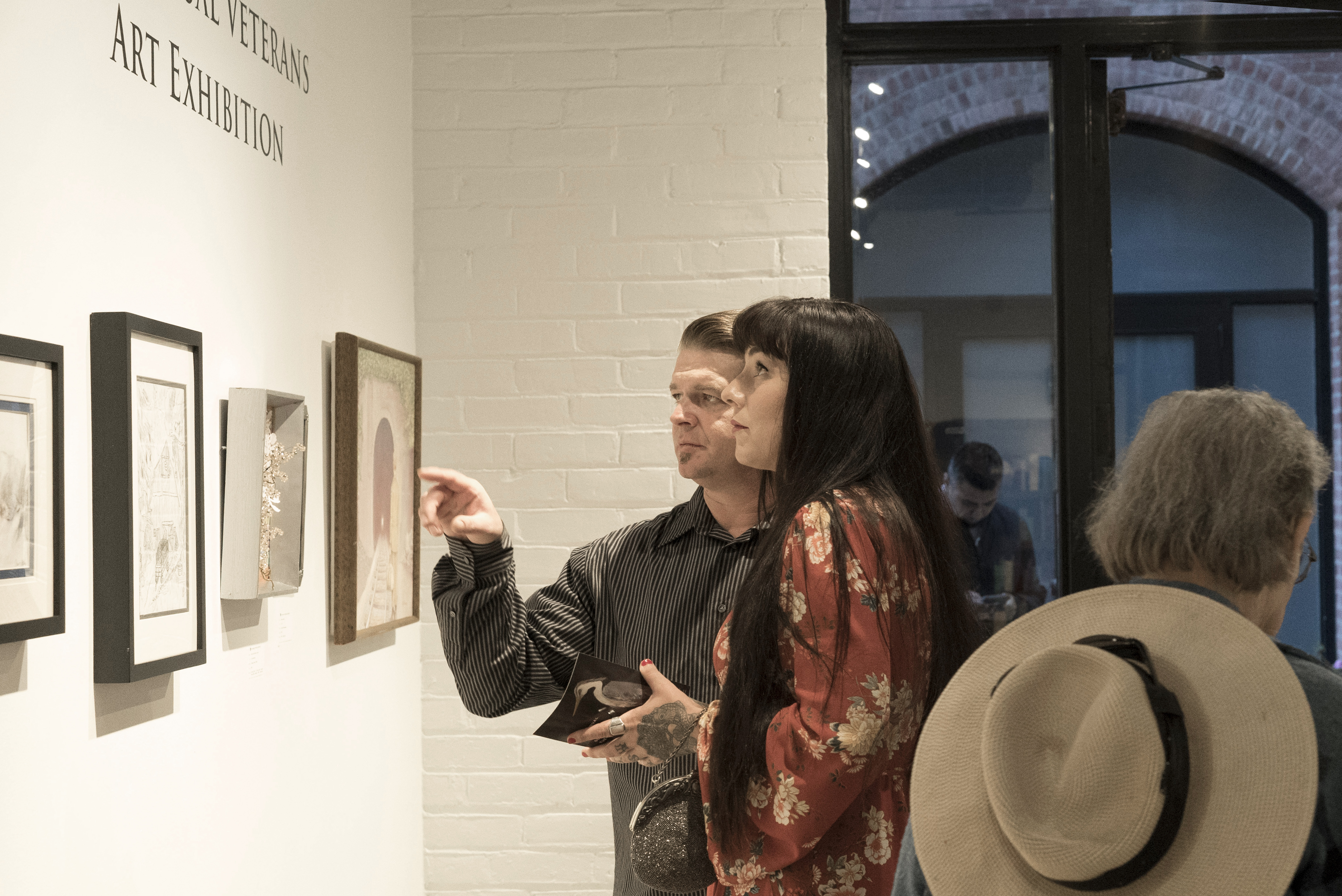 “It feels good to see and I think one of the biggest statements in honor of the three clinicians that we lost to see their hearts here tonight is extremely reflective,” she continued. “I think healing of something good is going to come out of this.”

Hosted at Academy of Art University Galleries at the Cannery, veterans from all walks were welcome to share the space and stories amongst themselves, from Yountville veterans who served in the 1950s and 1960s, to active members from the U.S. Marine Corps and U.S. Navy. Generations of military service intermingled, especially those who went on to start their next chapter as artists educated at the Academy.

John F. Davies enrolled at the School of Illustration (ILL) after he served in the Marines during the second Cold War. His pen and ink drawing, entitled “Armistace,” was placed next to current ILL student and Navy vet, NaLena Lopez’s submission, a humorous comic she called, “Urinalysis with the Commanding Officer.” The two chatted on their collective experiences as veterans and artists and being part of the Academy community of vets.

“What I’ve learned, once a soldier, always a soldier; once a Marine, always a Marine, once an airman, always an airman,” Davies said. “Regardless of what conflict we served in individually, there’s that brotherhood and sisterhood that seems timeless in so many ways.” 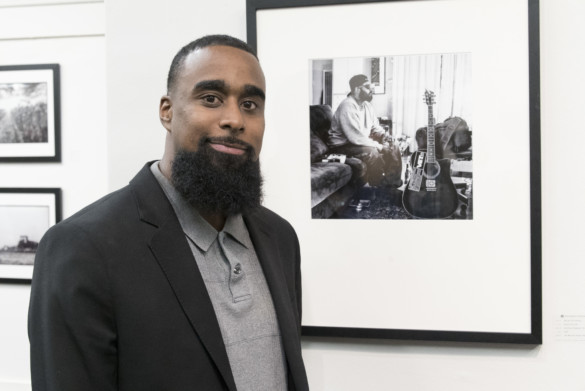 School of Photography student and Marine Corps veteran Adrian Childress with his work at the Veterans Art Exhibit. Photo by Bob Toy. 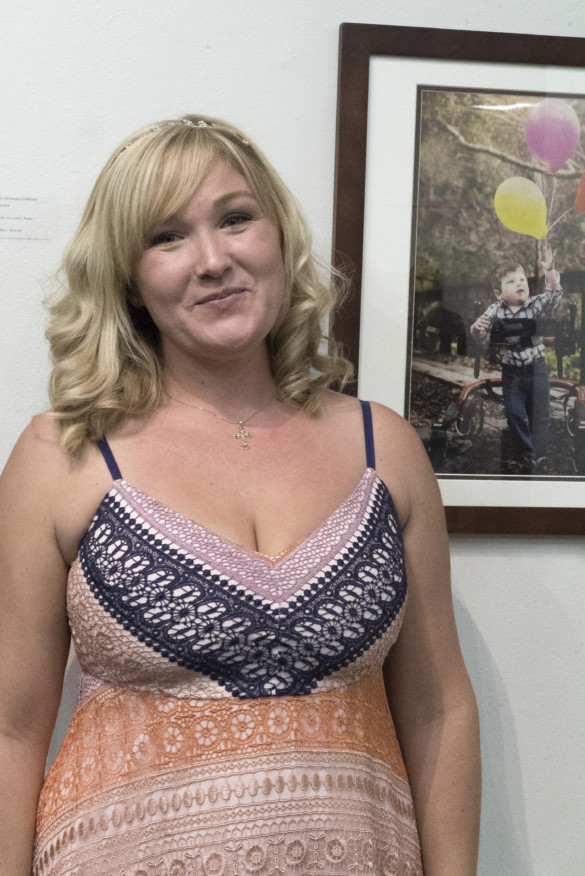 School of Photography student and Army veteran Brianna Farrara with her work at the Veterans Art Exhibit. Photo by Bob Toy. 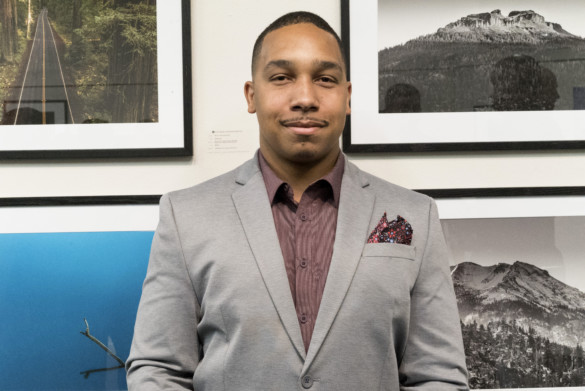 “I think I made the right decision to come here. I joined the Navy to come to this school,” said Lopez, who also goes under the alias of Minnie Salinas for her art. “I think [illustration] is a storytelling medium for me. I love telling stories and I think that’s one of the major reasons I chose illustration specifically.”

These kinds of full circles were happening with military personnel from all eras throughout the entire night, between framed drawings and photographs, sculpture and even garments created by a veteran in the School of Fashion.

There were familiar faces, such as Bob Bischoff, a U.S. Army vet and regular at the Veterans Art Exhibit, who brought his painted gourds. There were also first-time exhibitors such as online School of Photography student Brianna Farrara, who left the Army in 2013 and enrolled as an Academy online student in 2014. She said being able to show her photographs of her son to family and military members alike felt like parts of her life becoming whole. 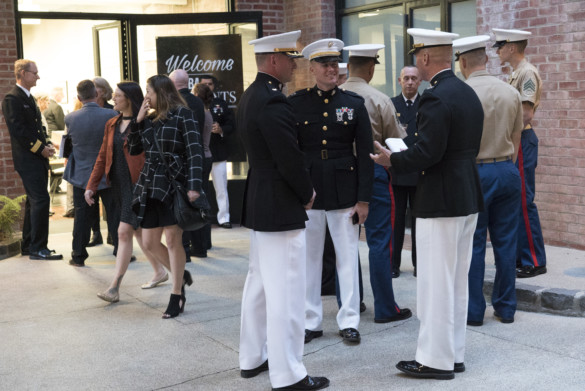 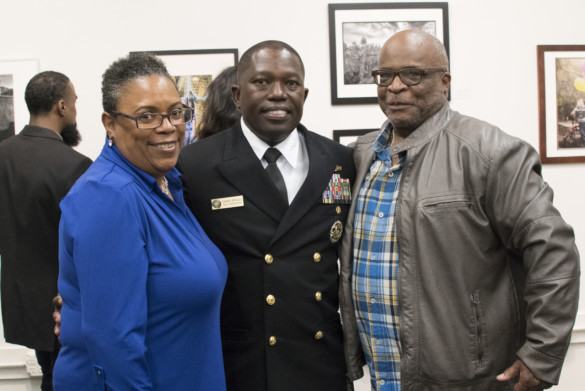 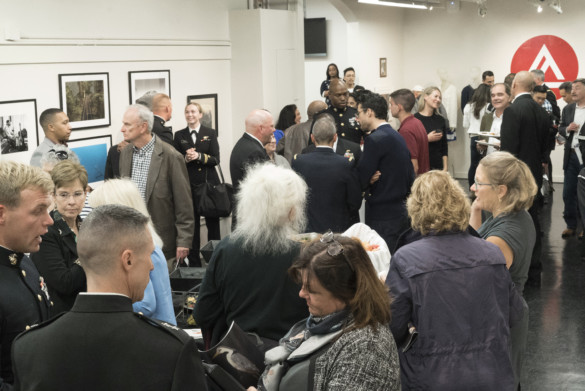 The Veterans Art Exhibit brought in many guests celebrating and honoring the work and art of military personnel. Photos by Bob Toy.

“It feels like home between my school, my son is featured [in the gallery] being a veteran and having so much military personnel here,” Farrara reflected. “I feel really blessed in general to go to this school, I would not be able to do it without the military and I am so thankful.”

Over the course of its years, the Veterans Art Exhibit has connected artist-veterans with active duty military in an effort to show one of the many options available to them once service is over. Often, veterans are not normally associated with artists, but visits to events such as the Veterans Art Exhibit can start to change that, as Jobert Valencerina, an active duty Navy Seal realized during his visit to the Cannery gallery. An artist himself, he said, with a number of Academy brochures in hand, “I feel like I could thrive here at the Academy of Art University.”

From US Marine Corps to the Movie Screen