For the 23rd Annual Faculty + Alumni Fine Art Auction, Craig Nelson took a chance at holding the event outside and, thankfully, the San Francisco weather obliged. On Saturday, Nov. 3, art collectors and gallerists took their seats in the Cannery plaza to start the live auction portion, during which, Nelson encouraged, they have some fun.

“And to help you have fun, we’ll be serving wine throughout the auction,” he told the crowd, a mix of new and familiar faces to the auction. This year, guests perused over 300 pieces of art, from traditional to abstract and contemporary. When a piece is sold, half of the sale is contributed to the Fine Art Student Scholarship Fund, and the other half goes to the artist. 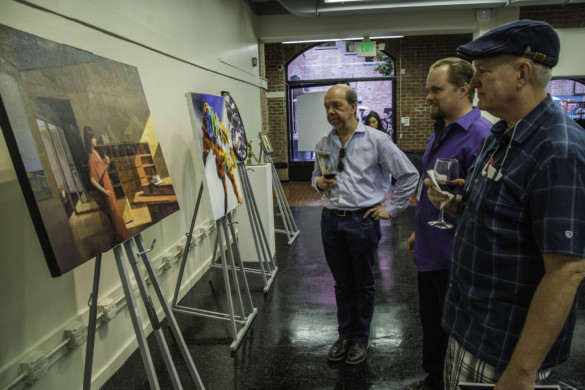 Live auction pieces were available to preview in the Cannery Gallery for potential bidders to examine up close. Photo by Adrian Childress. 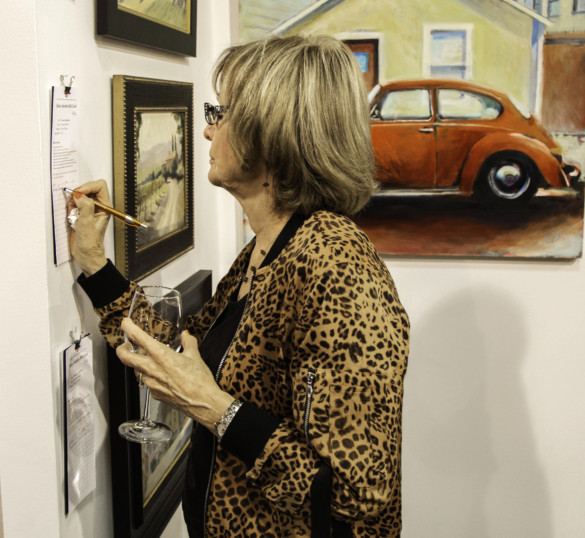 Guests could bid on over 300 pieces of art at the Silent Auction, from paintings to sculptures to jewelry. Photo by Adrian Childress.

As Executive Director of Painting and Printmaking for the School of Fine Art (FA) at Academy of Art University, Nelson founded the Fine Art Auction in 1995 to raise money and in recent years, the auction has raised enough to offer an additional Study Abroad fund. But buyers benefit as well since many of the pieces, contributed by coveted artists such as Nelson himself, are up for grabs at a fraction of the price.

“You’re buying a part of history, and sometimes you don’t realize that,” Nelson said before the live auction commenced. “You buy a piece of art; it’s there for the rest of your life. You get to enjoy it, brag about it, pass it on as a family heirloom. It’s the gift that keeps on giving.”

Robert and Lauren Finnell, a father-daughter duo from Orinda, California, have made it a family tradition of sorts to visit the Fine Art Auction, collecting at least 25 paintings over their 15 years of attending. 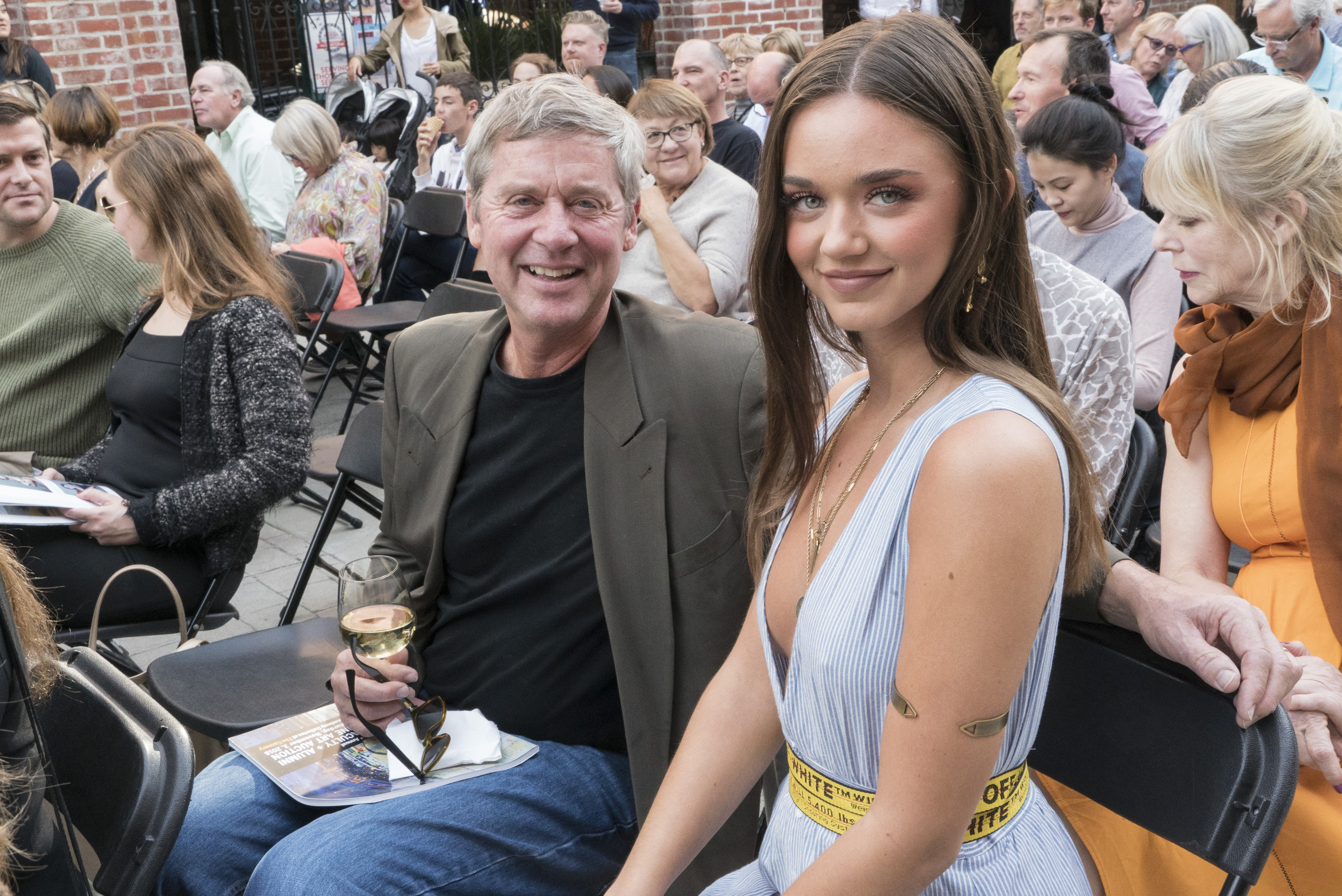 Orinda-based father-daughter duo Robert and Lauren Finnell have been attending the Fine Art Auction for 15 years. Photo by Bob Toy.

“We have seven Carolyn Meyers, five Craig Nelsons, but we also try to collect one from each artist,” said Robert, who first heard of the auction when he would walk past the Academy’s 79 New Montgomery building nearby his office. “We like the charitable idea of giving to scholarships, the camaraderie, seeing the same people every year, we just really enjoy it.”

For Meyer, FA painting & printmaking director, seeing returning collectors like the Finnells is one of the most exciting parts of the auction. Every year, Meyer’s work is sought after by bidders—for the 2018 auction, there was a competitive bidding war for her “Baby Blue and Pink” piece.

Meyer herself was also one of the most active bidders in the room. Her signature could be found on bidding sheets for classical style cityscapes, mixed media pieces and abstract still lifes. She took a particular liking to School of Fine Art—Sculpture instructor Margaret Keelan’s “Tiny Dancer” pieces and a bird series contributed by 2012 M.F.A. alumnus Michael Weins.

Even from a buyer standpoint, Meyer explained that the Fine Art Auction can be a full-circle, beneficial opportunity for Academy students, especially recent alumni such as 2017 M.F.A. graduate Cory Swenson-Scott. 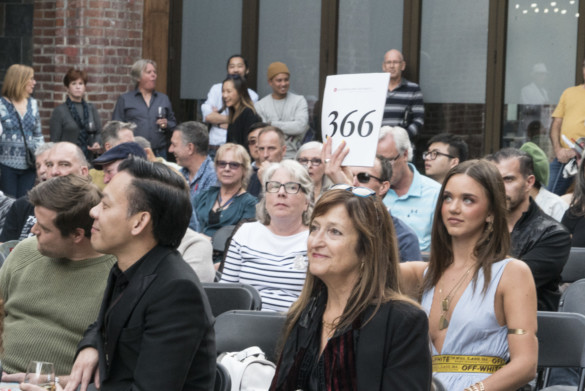 Bidders during the live auction. Photo by Bob Toy. 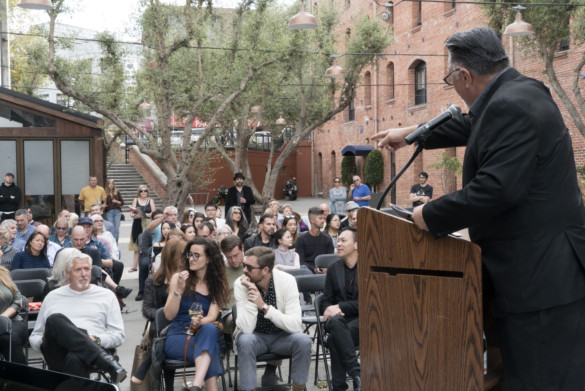 By bidding Meyer ultimately wants, “to give students a chance to see what it’s like when someone purchases their art.” It’s a tradition of giving and receiving—Swenson-Scott was a recipient of the scholarship fund during his own Academy schooling, and by posting a few oil paintings from his women portrait series at the auction, he hopes to benefit another student as it did for him.

“I was at this school for seven years, and it was an amazing part of my life. It is a major transition for me as a person to be able to be a part of it and give back to the school in general,” said Swenson-Scott, who had six paintings purchased at the Fine Art Auction. “I feel like this is the reason why I want to be an artist. I’m finally a part of that community, and I can actually thrive, and there’s a give-and-take with that.”

“It is a privilege to be able to have so many talented students here at the Academy and to give them this chance to go towards their dream that they’ve been looking forward to their whole lives is a real honor,” Meyer said. “I put myself in their place and know it’s not easy all the time, but it’s possible. So I help them to see that the dream can come true.”