Academy of Art University student Paula Amaral was one of seven design seniors chosen to participate in Supima’s annual design competition at New York Fashion Week. Supima is an organization that promotes the use of American Pima cotton around the world. Now in its 11th year, the Supima Design Competition challenges fashion design students to innovate the conventions of evening wear by creating five looks made from different types of Supima cotton fabrics, including denim, jersey, velveteen and twill.

Nominated by her instructors and mentors to participate in the competition, Amaral’s collection inspiration came from a feeling, rather than something visible or tangible. The Brazilian-born designer found herself at a crossroads between her creativity, how the world seemed and where it was going. “I am often inspired by the moment or a situation I am in at the time I start a collection,” she said. “For this collection, I was feeling overwhelmed by all the uncertainties happening in the world. My parents are in Brazil, which is in a severe political and economic crisis … I felt the world and the people around had lost faith; I wanted to break the barrier of doubt and angst I was feeling.” 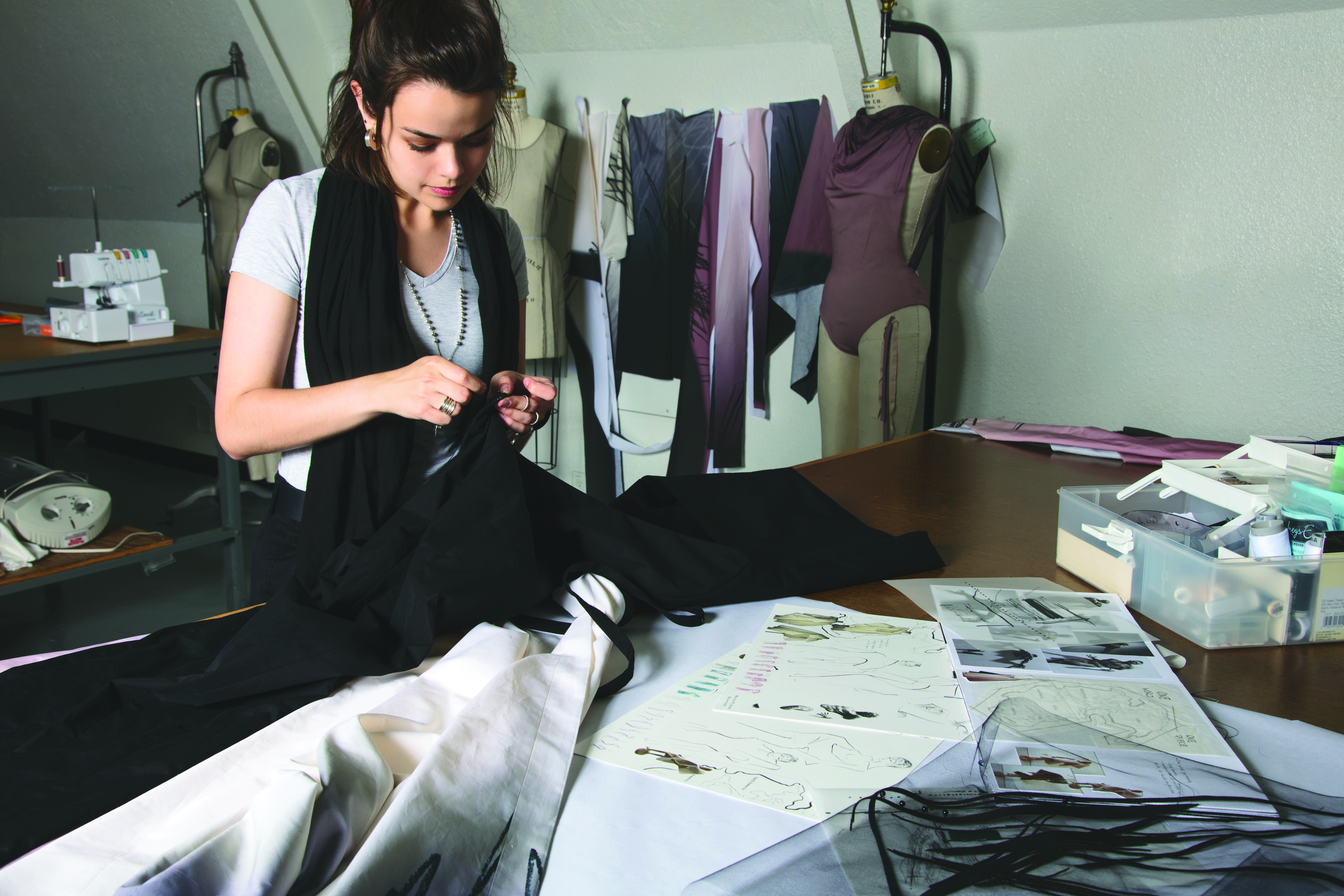 Amaral explained that this context is also where the collection’s name, “The Other Side,” originated. “The collection is a transition from where we are in this dark state of mind into where we can and should be,” she said.

The monochromatic color palette placed focus on the contrast between structure and movement. What started as a large white canvas gave her the vision of the supercontinent ‘Pangaea,’ or one united world. “One world with less injustice and less inequality,” Amaral said. Meanwhile, the dark colors of her collection depict the somber and divided moment in which the designer currently sees the world. Ending with a positive and hopeful tone, the last look is a muted light-pink dress that embodies the answer to the division of worlds: love. “Love is the answer to all the problems,” Amaral said. 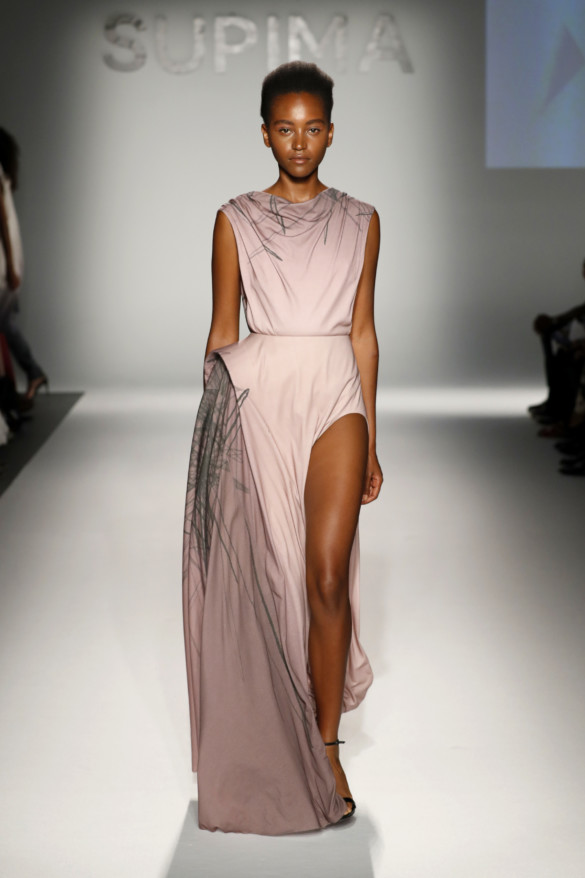 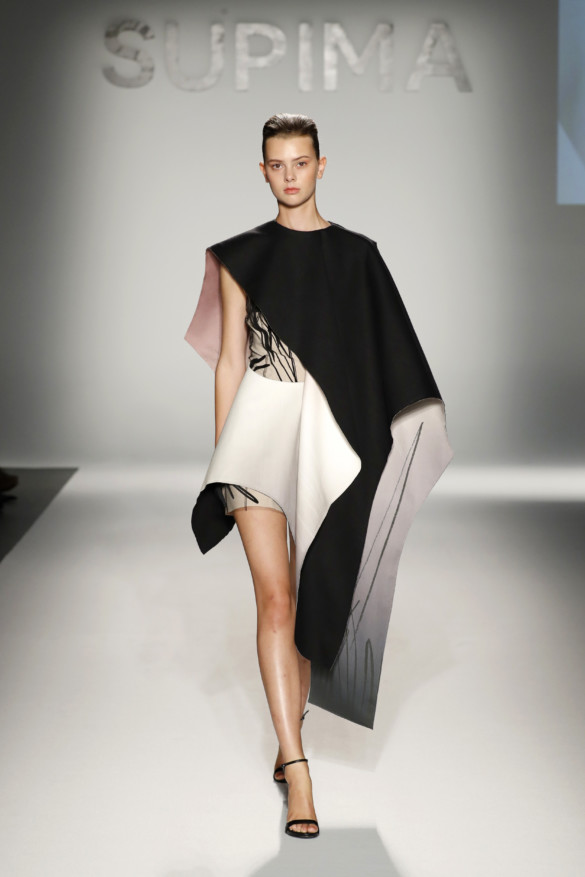 Amaral’s elegant, minimalist aesthetic was present in all five of her looks, but individually, each look was a reference to five different women who ultimately create one whole women, reflecting the idea that “women are multi-faceted,” she said. The first was a “strong, chic woman,” followed by a garment inspired by tuxedos to reference the businesswoman. The third look, made of denim, referenced the playful and adventurous woman, while the fourth, made from jersey, was the confident, sexy woman.

This year, the Supima Design Competition judges (including industry experts such as NYFW founder Fern Mallis), chose Lili Shi, a Fashion Institute of Technology graduate, as the winner of the $10,000 cash prize. Shi’s collection transformed the cotton into avant-garde gowns made with an intricate series of hand-dyed pieces. In one garment, for example, she rendered the Mona Lisa into a cocktail dress. Shi summarized her inspiration, “This collection is inspired by Daoism’s philosophy; Dao begets one, one begets two, two begets three, three begets all things.”

Each of the contestants received mentoring from fashion designer Bibhu Mohapatra, whose advice to the designers was to relax. “You have professionals here. When all these amazing hands and minds are around you, why worry?” Mohapatra said.

Paula Amaral at the Supima show.
Photo by Getty Images.

In addition to participating in the competition and showcasing at NYFW, the work of all seven students will be exhibited during the upcoming Paris Fashion Week at an installation at Supima Design Lab. Supima is broadening their reach in support of emerging designers by launching the Supima Design Lab in Europe, which aims to complement the well-established U.S. focused Supima Design Competition. Paris is also the next chapter for Amaral, a winner of the French Exchange Scholarship. She will be taking classes in Ecole de la Chambre Syndicale de la Couture Parisienne during the 2018–2019 academic year.

Returning guest host, stylist June Ambrose, who presented the winner, said, “I think that what Supima is doing with this design competition is one of the single most important aspects of our industry in terms of incubating, harnessing and nurturing talent. The talent is so impressive, and they’re performing at such a high level.”

Mastering Rules to Break Them