Many Academy students grew up playing popularized Blizzard Entertainment series such as “World of Warcraft” (WoW) and “Starcraft” so it’s no surprise the Academy of Art University’s 79 New Montgomery Theater was full on Nov. 6 for the company’s industry presentation.

The Irvine-based game developer and publisher regularly visits the Academy and returned on that Tuesday afternoon to conduct student portfolio reviews and talk about Blizzard’s philosophies, work culture and career advice for upcoming graduates.

Rucker graduated from the School of Animation & Visual Effects in 2003, when, he said, gaming was still “a dirty word. Back then, games in the 1990s didn’t look as good.” As high-quality systems and production were introduced, Rucker said it was cool to see how the School of Game Development (GAM) grew right alongside it.

Rucker not only had high praises for GAM, but the general group consensus also agreed on the caliber of the student work. Briggs said he was “impressed how well-rounded students are nowadays.” To which McBride added, “I kept seeing portfolios that were diversified.” 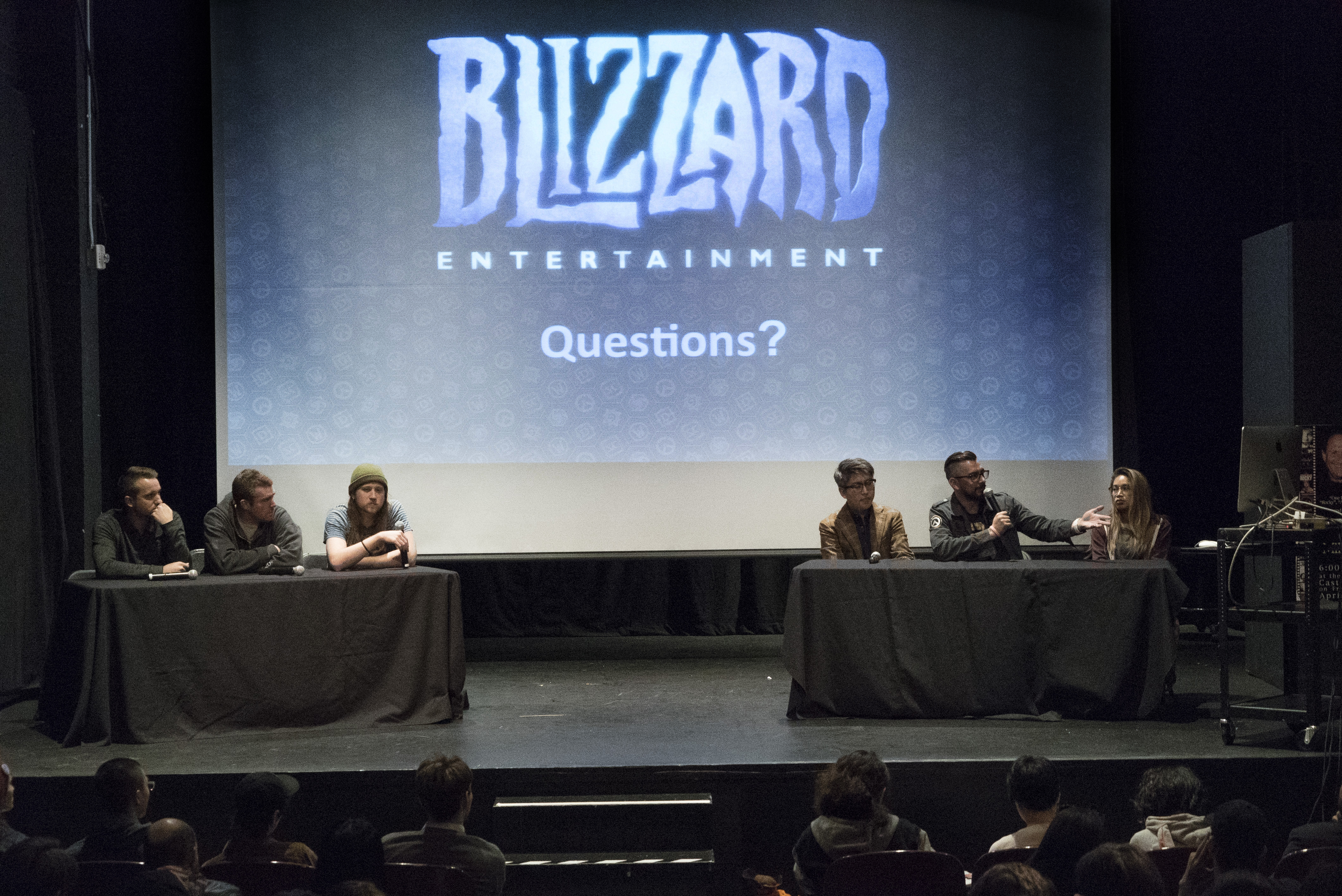 “For WoW, in particular, we do illustration to concepts to effects to modeling. We do a little bit of everything even though we’re on the character team,” McBride continued. “It’s good to be good at all these other things too because it helps you get stuff done. It also helps you understand other people’s perspectives and what they do on the team as well.”

Chen noted it was clear that Academy students were being taught by professionals and Bowden noted that was a key in how Academy-trained students stand out from the pack. “It’s not enough to know where the buttons are, it’s about the application,” said Chen. “These students are learning through realistic situations that could happen in a workplace environment that’s beyond an assignment where they’re just learning a piece of software or art medium.”

For the presentations, the developers spoke to the specifics of working for Blizzard. McBride and Rucker tag-teamed to describe their creative process and the importance of staying inspired and collaboration, while Briggs provided practical tips on breaking into the industry. Chen delivered a crash course on animation pipelines and Bowden broke down how world-building and stories lie in the small environment details that don’t require dialogue, action or film.

But a main point across the board was the importance of passion and building relationships within Blizzard’s culture. McBride described, “On this team, we’re all about creating new ideas and seeing them executed.”

“When we interview for candidates, we’re looking for soft skills,” Briggs said to the crowd. “Can we work and collaborate with you, can we build relationships with you outside of work?”

In an interview with Academy Art U News prior to the event, Briggs explained, “You have to be able to create the content to get the job done no matter what. I think the really useful thing for students is hearing what the job is actually like, learning about the soft skills side of the job, I think those are important things that students don’t think about.”

For the artists, animators, modelers, and game developers of all experiences in the crowd, Bowden believed “there’s always a consistency in sharing core values, principles. It boils down to: here are the things I wish I had known as a student.” Recalling his own uncertainties as an Academy student years ago, Rucker welcomed the opportunity to share his knowledge.

“I was on that side, wondering if I was going to find work, wondering what I’m going to do once I graduate. I was scared too,” Rucker said. “So it’s cool to see and know what it’s like to sit in that seat, but also now, I’m sitting on this side of the stage.”