Video games are made to be fun and challenging, but very few are made to be therapeutic. And that’s how a small group of students at the School of Game Development (GAM) at Academy of Art University spent their summer, by creating “Adventure Bay,” an augmented reality game designed for children with cerebral palsy. 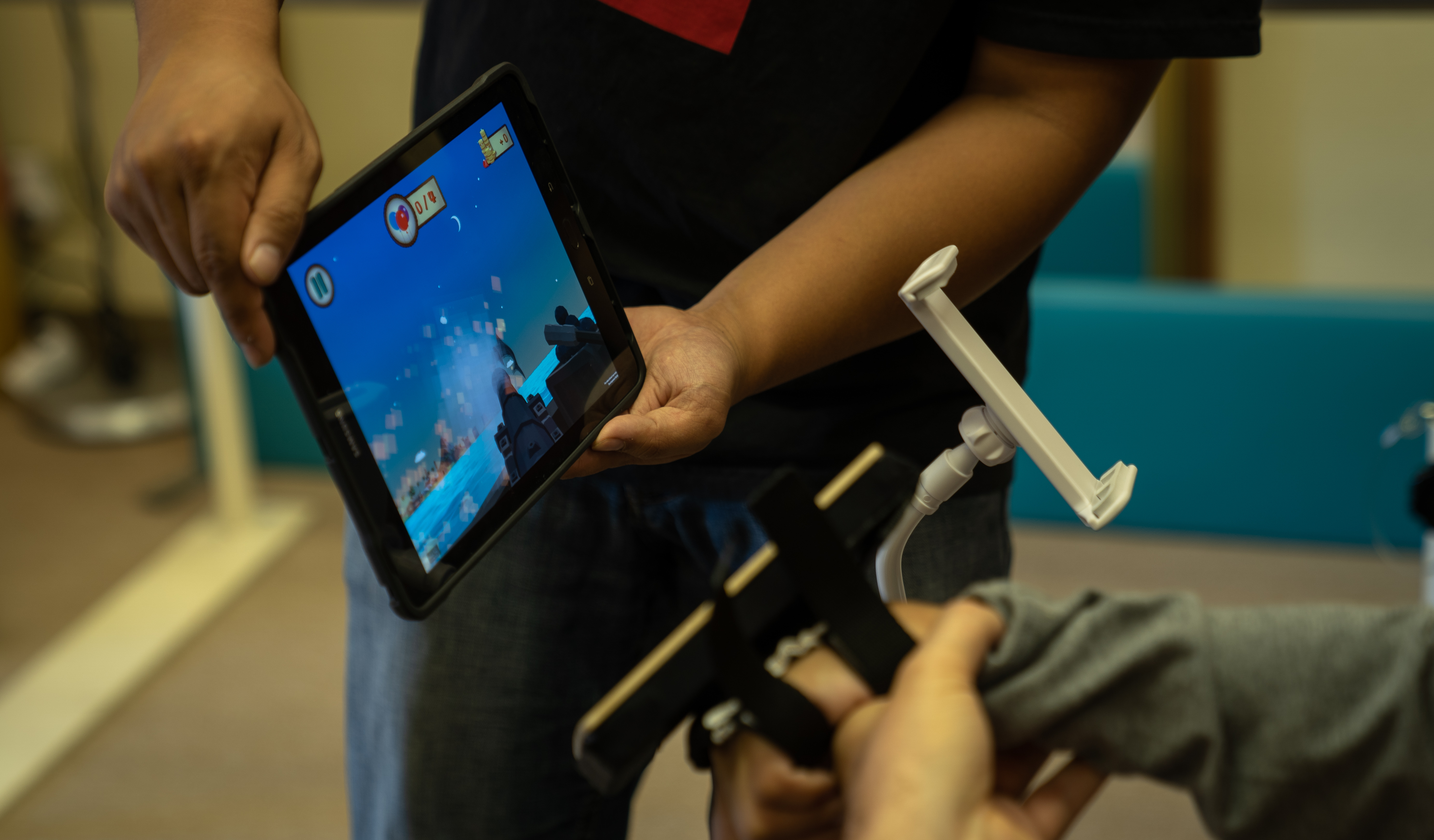 A look at the tablet-based AR game, “Adventure Bay.” Photo by Christina Marapao.

By the end of summer, “Adventure Bay” had two games: “Fairy Duster” and “Balloon Shark.” Each was designed with very simple objectives in mind, recommended by physical therapists from Avalon Academy, a Burlingame private school for children with movement disorders, and California Children’s Services Medical Therapy Unit in San Francisco’s Sunset district. They advised that the games should be simplified further to exercise gross motor movements, such as pronation and supination (the ability to rotate wrist palm up or palm down), and pilot a wheelchair.

“We spent a lot of time thinking of what would be appropriate and what kind of actions that these kids can take,” said GAM student Alex Agcaoili, who worked on “Adventure Bay” as a designer and program lead.

Just like any other game, playtests are instrumental in pointing out where the game soars and, in the same vein, where it needs more work. But creating games for children with cerebral palsy is especially tricky because every use case is different. According to Avalon Academy Director of Movement Education Brenda Huey, there were occasions where Wii games were used to work on arm motor control and balance, but generally, children and young adults with moderate to severe physical disabilities are not always represented in mainstream activities and entertainment.

“It is really wonderful that this group wanted to use the latest technology to create an AR game specific for the kids I see,” Huey said. “’Adventure Bay’ is a platform for endless possibilities to integrate purposeful movement and function into a well-packaged game that kids want to play.”

On the demo day held back in August, “Adventure Bay” visited both institutions. Tested by five students ranging between nine to 16 years old, Goodale said this initial cluster of patients provided a ton of good data on what to improve while also having fun trying out the games.

“Augmented reality in the real world was compelling enough for him to drive right to the spot,” Goodale said of one client named Anjelo, who is learning to drive his chair by pressing controls with his head.

Based on the breadth of their abilities—one student was able to walk but had issues with her vision; another deferred his eyes from too much visual noise—Goodale said they gained tons of insight on how to make the game more accessible. “[The game] wasn’t immediately intuitive and you want games to be intuitive if they can be.”

As ambitious as the “Adventure Bay” therapy game project was, Agcaoili believes getting a demo into therapists’ hands and others working in the field is a huge accomplishment by itself.

“If we get more people who can use the technology, who understand cerebral palsy, who really know the direction to go in, this project would explode,” he emphasized.

Goodale and the “Adventure Bay” team are setting up plans to move the project forward. He said addressing issues within the software prototype, building out the center hub, gamification and possibly adding another mini-game are first priorities. But he’s hoping to obtain backing from more resources, internal and external, in hopes that developing therapy games becomes a regular part of GAM.

“I’d like that to be an ongoing concern for our school, where we’re going to devote a regular part of our development power, every semester, toward working on pro-social games and build out therapy games in AR/VR,” Goodale said. “I think it’s the kind of thing that we need to pay more attention to, we need to start to think about it as a target for what we do. … Creating a game that has a positive impact on someone’s life.”

The Cast of “Bohemian Rhapsody” Rocks the Castro Theatre