The Cast of “Bohemian Rhapsody” Rocks the Castro Theatre

It’s not every day that you get to go to work and recreate one of the most iconic rock performances of all time, but for the cast of “Bohemian Rhapsody,” they stepped into the legendary shoes of Queen guitarist Brian May, drummer Roger Taylor, bassist John Deacon and the one and only Freddie Mercury while recreating the band’s 1985 set from Live Aid at the start of filming.

“It [was] terrifying,” said Gwilym Lee, who portrays May in the film. “It’s Freddie Mercury and Queen. [At] their kind of all-powerful best. In that situation, you know, it’s sink or swim. You’ve got to go for it, and you can’t be casual or you can’t second guess yourself when you’re playing a part like this, you’ve really got to commit.”

Lee, Rami Malek (who’s at the helm portraying Mercury, Queen’s charismatic and uninhibited frontman) and Joe Mazzello (portraying Deacon) were in town earlier this month as part of a special invitation-only advanced screening of the highly anticipated film at the Castro Theatre. The trio hit the red carpet where they spoke to Academy Art U News about their experience making the film. 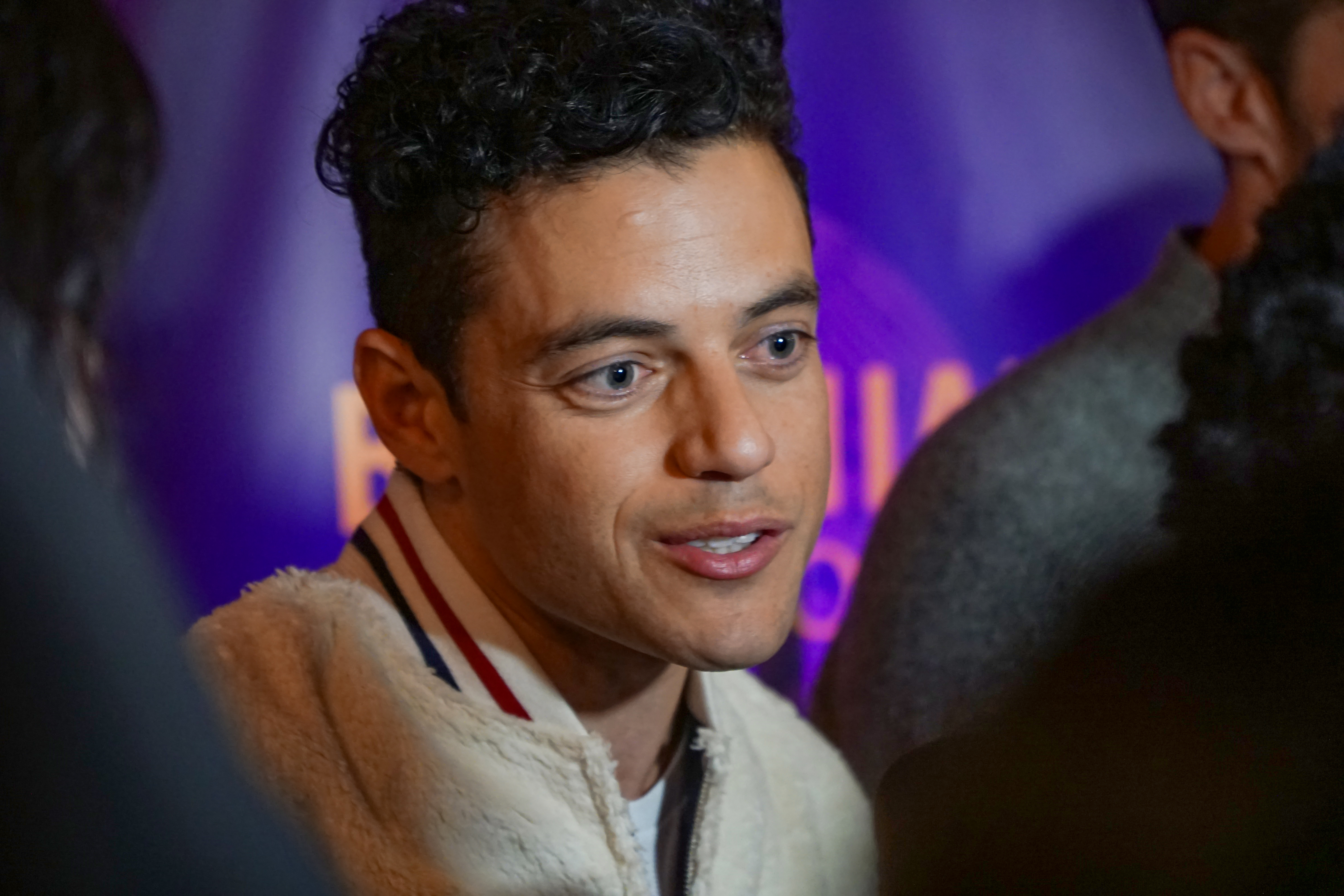 Actor Rami Malek doing interviews on the red carpet at the special SF screening of “Bohemian Rhapsody.” When asked about which song he thought his “Mr. Robot” character might gravitate towards, Malek replied, “I could see Elliot taking down corporations to the tune of ‘Another One Bites the Dust.'” Photo by Mateo Tayamen.

On screen, Malek captures the essence of the late singer with a seemingly effortless ease and swagger, both on and off stage. He shared that his preparation for the role was born out of an appreciation for Mercury. “Maybe it’s an actor thing, maybe it’s just a human thing, but when you start to appreciate someone or you’re a fan of something, maybe you begin emulating it subconsciously,” Malek explained.

The actor had quite the task taking on the role of such a celebrated frontman, especially one with such an unrivaled physicality, something Malek was well aware of. “[Freddie] is one of the most unique human beings who has ever graced a stage or just basically walked this planet,” he said. “His mannerisms are so specific, and it’s almost as if every action, physically of his, is a ballet. He just knows how to interact with the world.” 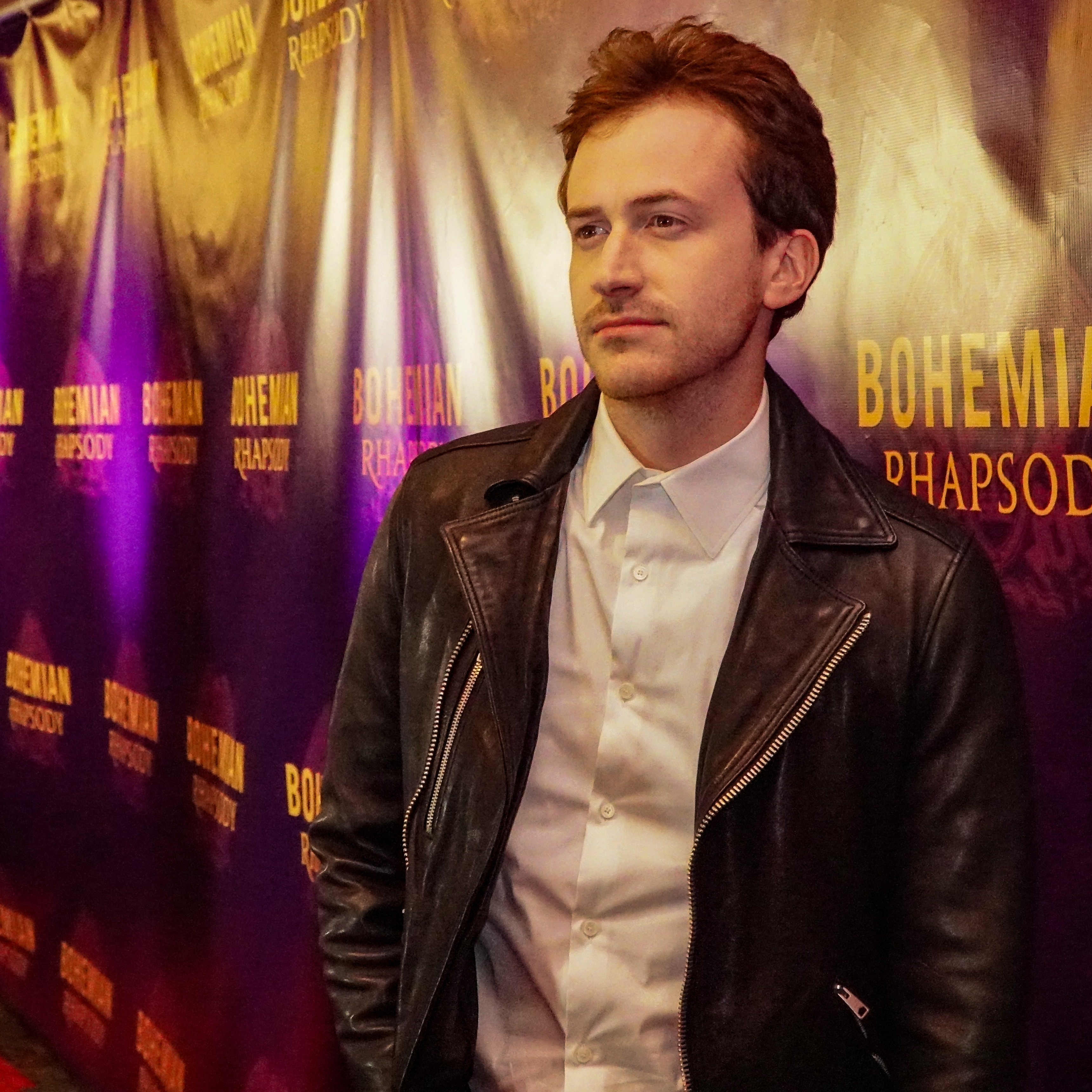 Joe Mazzello on the red carpet at the special SF screening of “Bohemian Rhapsody.” Photo by Mateo Tayamen.

For Lee and Mazzello, they shared that they played a little bit of guitar prior to filming, but nothing like their Queen counterparts. “I played acoustic campfire guitar but certainly not lead guitar at the level of Brian May’s genius,” Lee remarked.

“When they asked me if I could play, of course, I did what any self-respecting actor would do, and I lied and I said, ‘Yes, I’m very good,’ Mazzello said, having never previously played bass. “Then they gave me so many lessons.”

Mazzello worked with a studio bassist “four or five times a week” for six weeks in the lead up to filming, learning to play Queen songs to the point where the actor “felt so comfortable.” “It’s me playing in the movie, I feel so proud of that,” he shared. “Even ‘Another One Bites the Dust,’ I just plugged in on that day and I was playing live in the scene. It was very cool.”

As for a song that posed to be a bigger challenge to get down, Mazzello revealed that the film’s namesake tune was one of them. “[‘Bohemian Rhapsody’] moves pretty quick. There’s a lot to do and it doesn’t follow any real set pattern,” he noted. 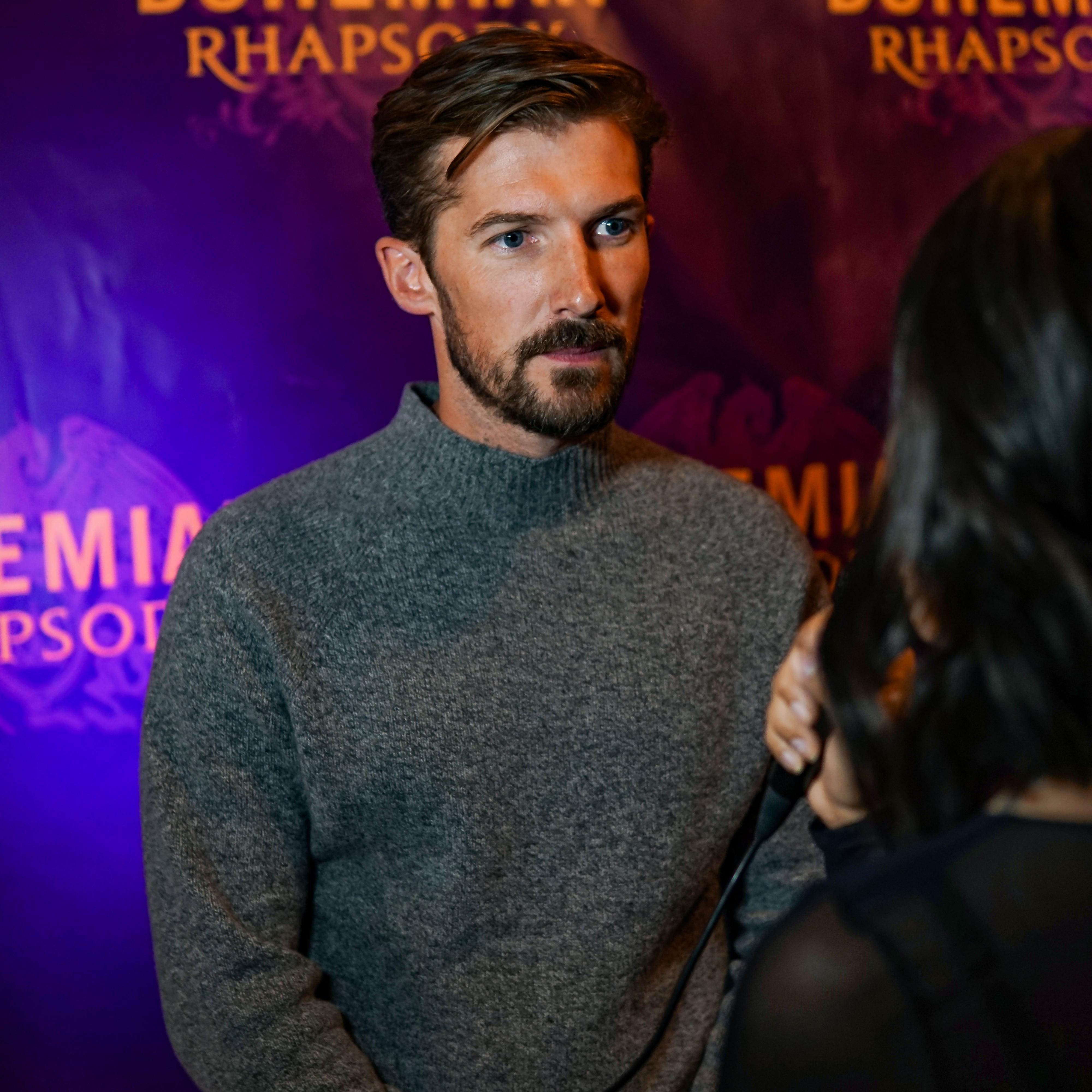 Gwilym Lee on the red carpet at the special SF screening of “Bohemian Rhapsody.” Photo by Mateo Tayamen.

As one of the producers on the film, May was able to provide invaluable insights to the actors, especially when it came to recreating Queen’s live performances. “Because John wasn’t around, Brian would give me little tips about little nuances that I missed,” said Mazzello. “Like, John used to lick his fingers sometimes when he would play the bass because his fingers would get stuck in the strings. He told me that and I started incorporating that every time I was playing.”

It was during the recreation of Live Aid, following the cast’s first run-through of the band’s set, that May had a quick reminder for Lee. “Brian was watching and he came up to me afterward and he said, ‘That’s very good, that’s very accurate, you’ve got it all down, but just don’t forget I’m a rockstar. You need to have a bit of ego,’’’ Lee shared. “It was such a great note because what I took him to be saying is that we’re not there just to mimic him or to caricature him or anything like that. We need to fill it with our own sense of adrenaline, energy, and joy.”

“The best thing that they gave us was their support,”  Mazzello added. “You just felt like they really wanted us to succeed.”

Art U News Predicts The Grammys