Home From the Cover Two Champions, Nine All-Americans Emerge From Indoor Track and Field Nationals
From the Cover

It all came out for Academy of Art Track and Field on the second and final day of the NCAA Division II Indoor Track and Field National Championships back inside Pitt State’s Robert W. Plaster Center on March 9.

“Everyone competed hard this weekend,” said Director of Track and Field/Cross Country Kevin LaSure. “We had a lot of people compete for the first time at NCAAs and they made the best of their opportunity. The best is yet to come for this group and I know we will be a lot better come the outdoor championships. I’m just really proud of the way our team competed overall and fought through adversity.”

Following up her lifetime-best in the 60m prelims, Darria Matthias (Fashion Styling) came through with an eighth-place result in the final. She delivered a 7.52 for still her second-fastest time of the year and would hoist an All-American trophy moments later. 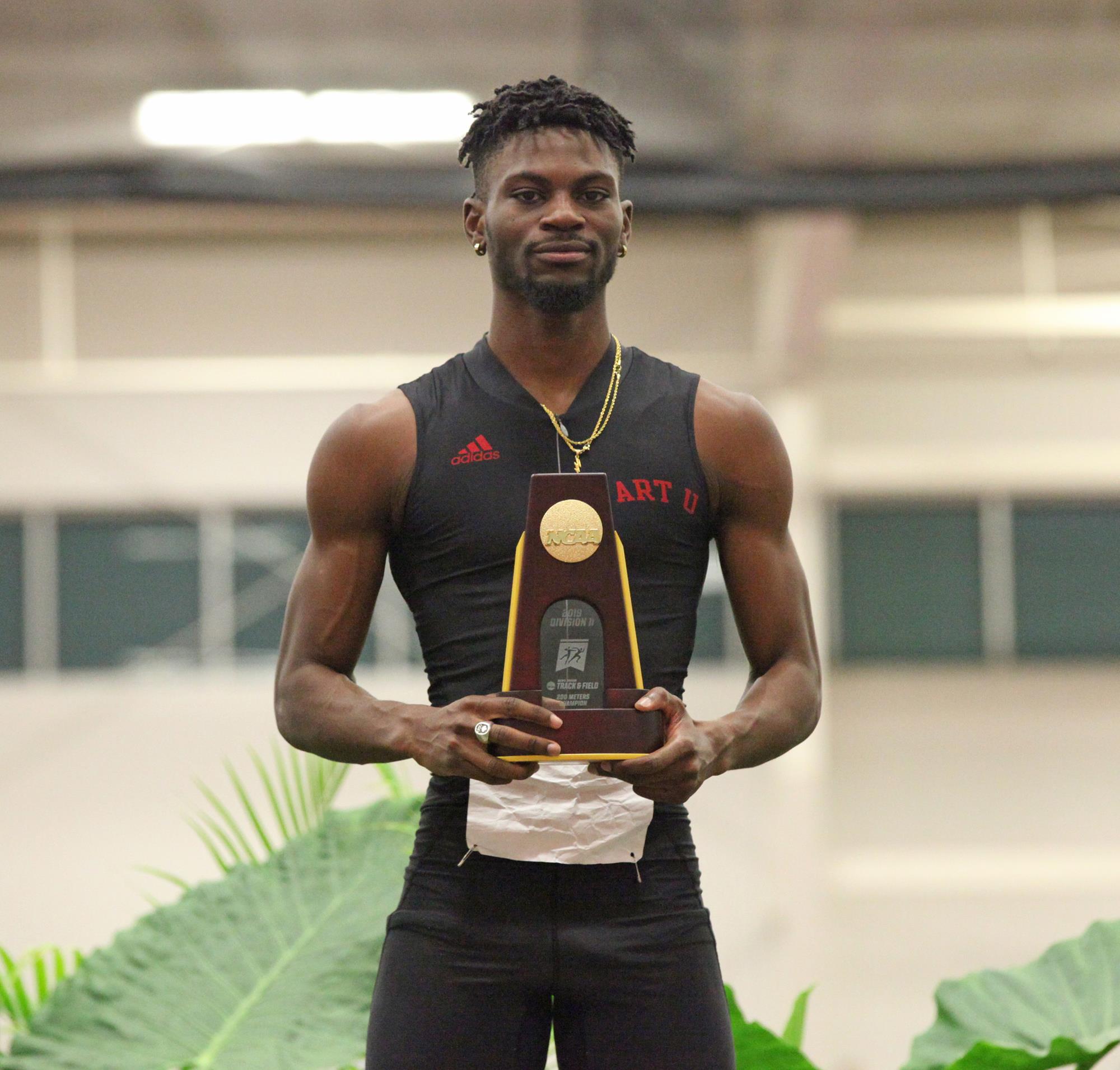 Just back of his time from the prelim the day prior, Mobolade Ajomale (Communications & Media Technologies) crossed the finish line at 6.65, conceding the 60m crown to Tiffin’s Jonte Baker who came in at 6.62. Ajomale’s runner-up finish, however, did earn him his 15th career All-American honor and never lower than a second-place result in the event over the course of his four years as a collegiate track student-athlete.

Some two hours later, Ajomale would return to defend his title in the 200m. Following up a 20.86 from the prelims, the Richmond Hill, Canada native came through with a 20.88, serving as the lone finals sprinter below 21.00. With the victory, he became a three-time national champion in the event (each of the past three years) and tied Adams State’s Sydney Gidabuday for the NCAA DII man with the most individual indoor titles in a career (six). It also served as Ajomale’s 16th All-American trophy, but he was not quite finished. 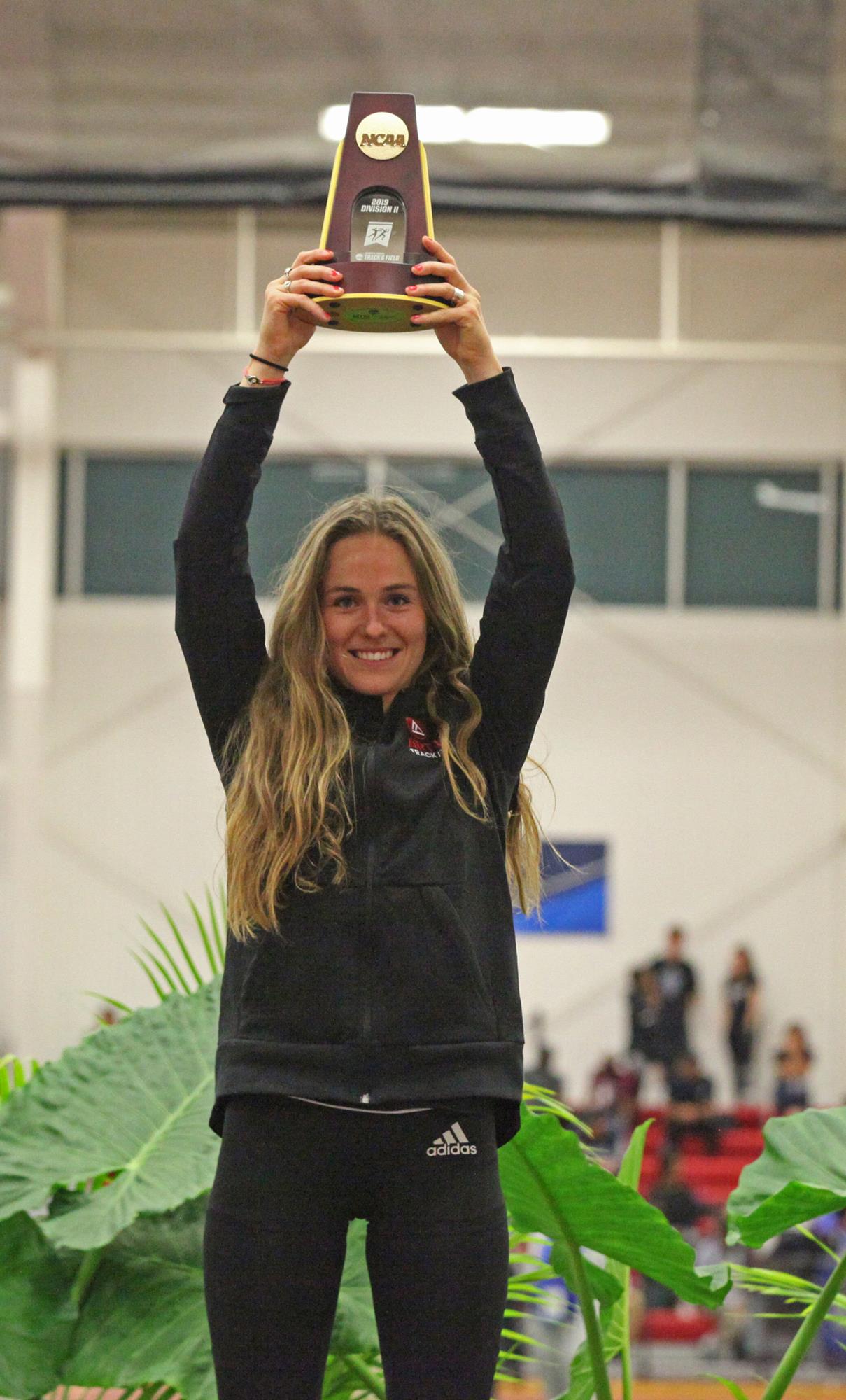 Coming into the triple jump ranked fourth in NCAA Division II, Camille Jouanno (Communications & Media Technologies) achieved her true potential with an impressive outing. The Bordeaux, France native challenged the program record of 41-6.5 (12.66m) set by Vashti Thomas in 2012 with her second attempt, going 41-5.25 (12.63m) before breaking it in her third with a 41-11.5 (12.79m). But Jouanno would not stop there. Second out of the prelims, she remained above 41-4 (12.59m) the rest of the way and went on to extend the record to 42-5.25 (12.93m) with her fifth attempt, earning a national championship in the process. The distance would better her next closest competitor, Cierra Pulliam of Lewis, by more than three inches.

“Camille is a heck of a competitor,” said assistant coach Akil Gipson. “She worked really hard this semester and bought into the process. When you combine those things, you give yourself a chance to compete at the highest level. This national title is a testament to all the hard work she has done since she arrived on campus in January.”

The final individual event of the day saw Victor Moreau (Communications & Media Technologies) run a very strong 3000m against an elite field. Initially, in the middle of the pack behind Adams State’s Gidabuday and eventual champion Elias Gedyon (Adams State), Moreau never dropped below eighth place across the first 1200m and began to make a significant move up across the final 900m. Fifth with 300m to go, he offered an impressive kick to take fourth overall with a time of 8:13.45. Moreau would stand on the podium for the first time in his ART U career, triumphantly raising his All-American trophy.

Bringing excitement as it always does, the men’s 4x400m was a sight to see. The Urban Knights sent Christian Carter, Roshard Williams, Grant Swinton, and Ajomale (all Communications & Media Technologies majors) into the mix and they would exit as All-Americans. Finishing second in their heat to St. Augustine’s (3:08.39) and third overall back of national champion Texas A&M-Commerce’s facility record 3:08.34, ART U delivered the fastest time in program history with a 3:10.02 for eight more points toward the team total.

The final team scores had the Urban Knights tied for fifth overall with Lincoln (Mo.) at 29 points. The national championship trophy went to Ashland (38 points) who barely edged Adams State (37 points). The ART U women’s 11 total points put them 19th overall in the team standings.

Myisha Haynes on the Road to Success