While some School of Industrial Design (IND) students were hovering over Subarus and Lightning Motorcycles this past spring at the Academy of Art University, Shizunori Kobara’s corporate sponsored class was mulling over robots.

“Robots are a big part of our future, it’s important that we think about designing these robots because they will be in our homes,” he said. “Before, we used to design robots to be pretty. Now they need to be functional.” 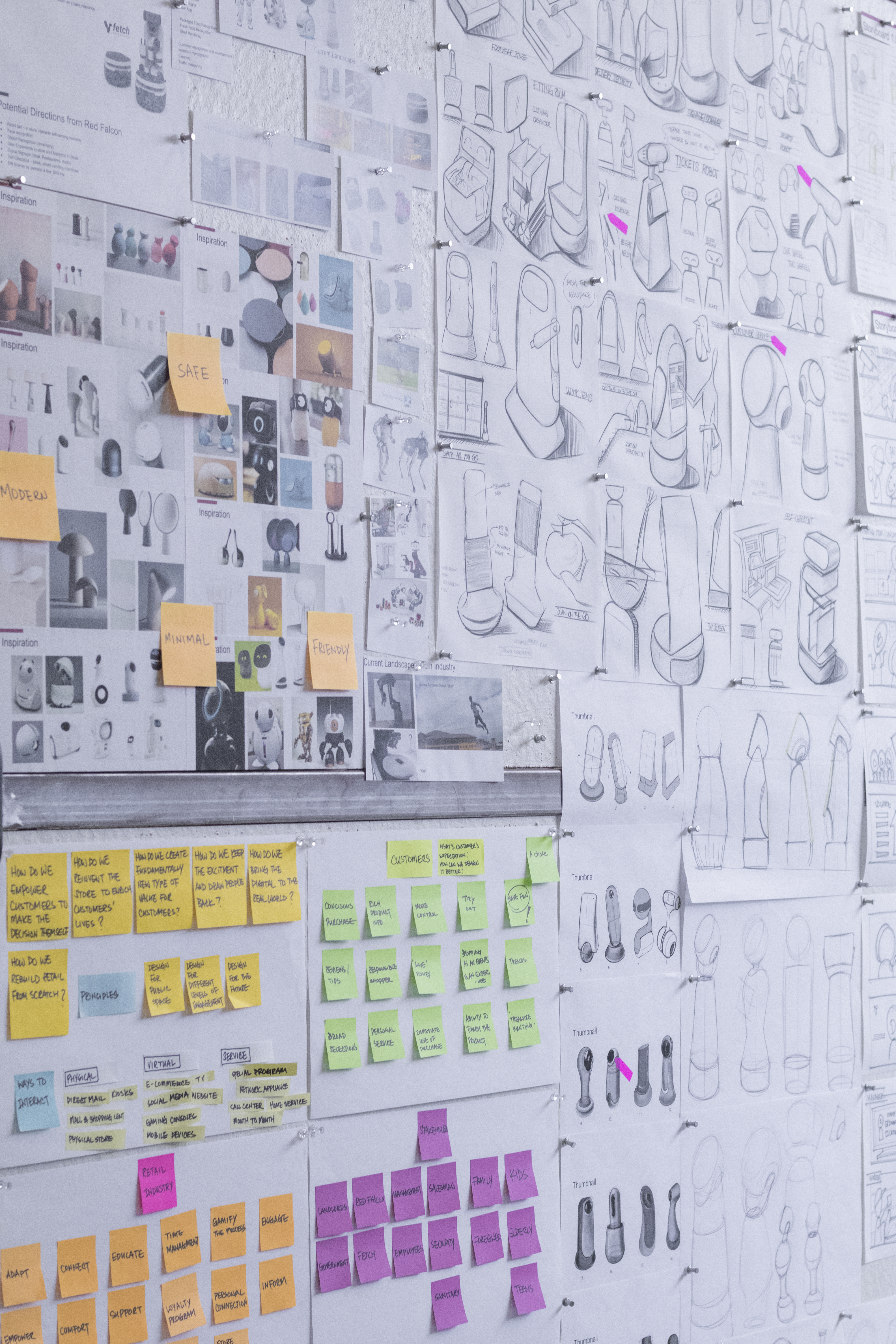 A look at student sketches and inspirations. Photo by Nina Tabios.

At Spring Show, M.A. student Liz Cruz debuted her robot, AISHA. Presented as a life-size foam mock-up, AISHA the concept (which stands for Artificial Intelligence Shopping Assistant) was designed to assist shoppers in the store, whether by seeking out specific items or providing alternative suggestions based upon the shoppers’ likes or dislikes. AISHA was Cruz’s solution for modern retailers, and by creating a more catered-to and personalized retail experience, she found in her research that shoppers were more likely to make impulse buys and return to the store.

Cruz’s retail robot hit the nose on what the Red Falcon software was built to do: AI, at a low cost, that can analyze demographics and pinpoint successful tactics that could cater its offerings to customers. Red Falcon AI is meant for use in everyday devices, such as smartphones and security cameras, as well as autonomous vehicles, and Kobara’s students made it their mission to envision how an AI robot could provide a wholesome customer experience, while also increasing business revenue.

“There’s multiple use cases to utilize this technology and the technology allows—in real time—an analyzing face recognition and analyzing traits of face and also object recognition,” said Red Falcon Vice President of Business Development Ella Taran-Katz. “We started as a retail robot but some of the students stretched a little bit to include other markets which we found very interesting.”

One example is graduate student Edrick Effendy’s supermarket robot, Mustachio. The butler-like bot could assist shoppers in ways similar to AISHA but could also help employees by taking note of inventory stock. M.A. student Junwoo Lee created a restaurant robot that could deliver menus, clear tables and recognize when a diner called for attention. The added AI, Lee said, would humanize the robot to make a more delightful experience. 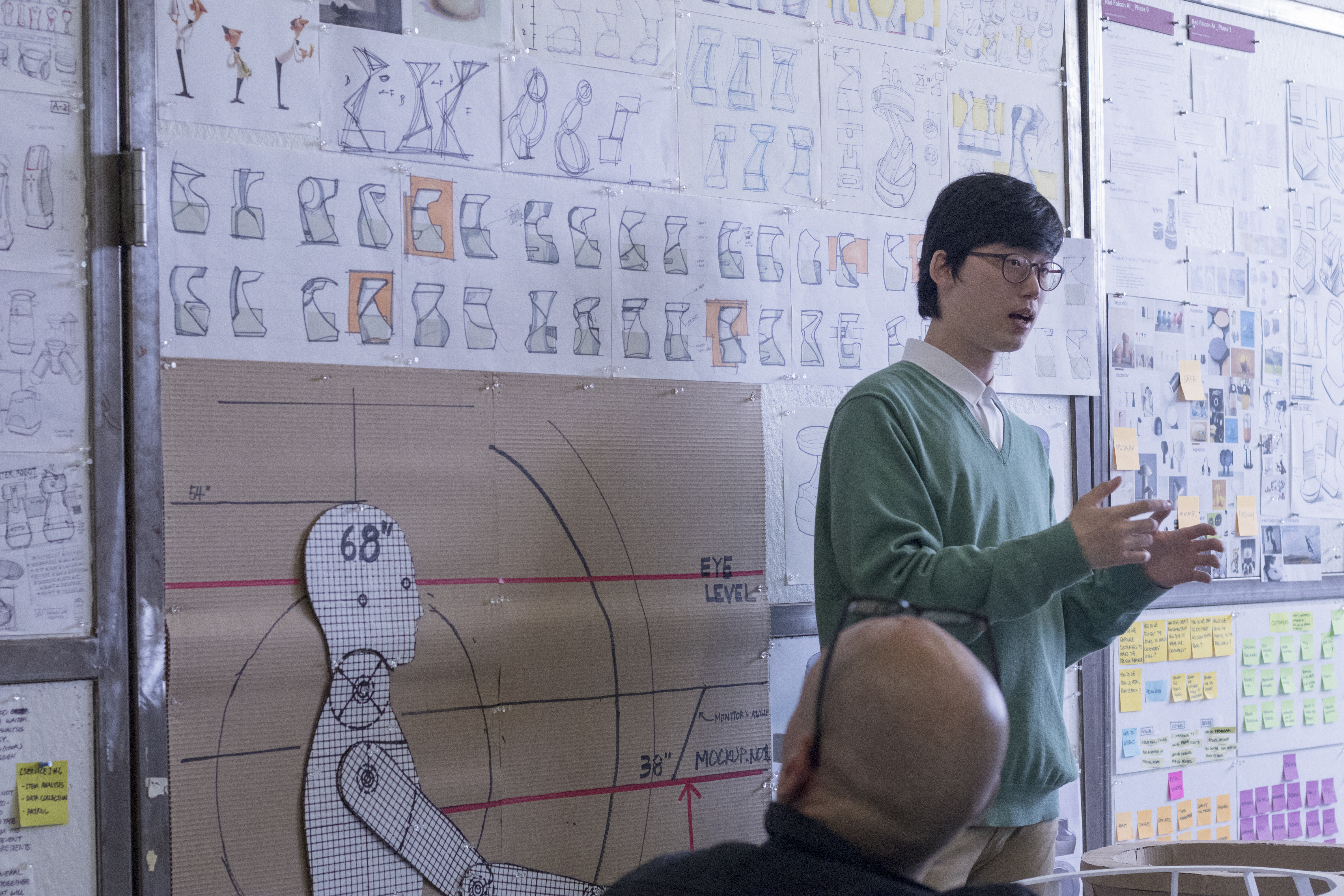 Junwoo Lee presents his waiter robot to the class at the IND warehouse. Photo by Nina Tabios.

“I’m deaf so whenever I want to order it’s hard to get the waiter. And once they get there, they just always seem very busy,” said Lee, speaking through an interpreter. Whenever Lee is at a restaurant, he has to wave to get waiters’ attention. “The robot would also be able to recognize people who need assistance or who might be hungry, like when I try to call or wave somebody down, with a positive and humor-filled demeanor—it’d be a nice robot.”

And creating delight was a huge part of this class. Students weren’t just asked to make an aesthetically pleasing robot, but how the physical design influences the human-robot interaction and overall experience. For a robot designed for kindergarten classrooms, questions like, ‘How do the robot’s gestures add to the comfort and delight of the students?’ and ‘What design aspects are you looking at that would encourage students to want to learn from this robot?’ were omnipresent.

“And that’s the tough part about design. After you get all these mechanisms and logic and everything, what is the expression so that people resonate really well with your design,” Kobara remarked. “And that’s really tough to figure out.” 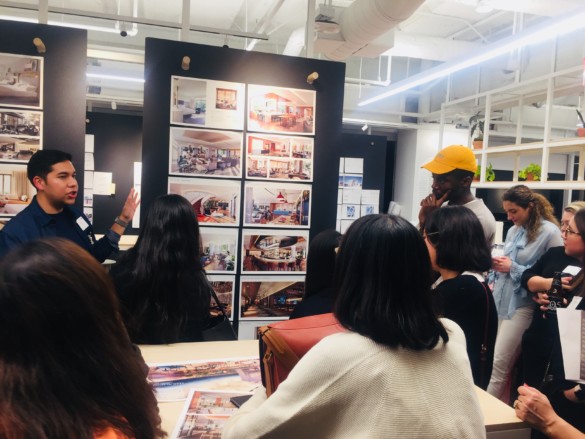 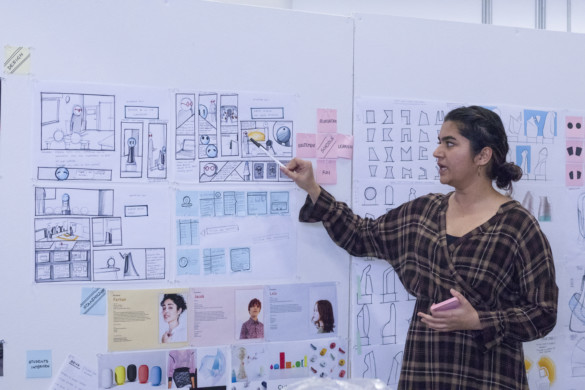 Amruta Ghosalkar talks the class through the ideation of her kindergarten classroom robot. Photo by Nina Tabios.

“It’s a good thing because that’s how you’re going to design in the real world,” Cruz noted. And many of her classmates, including Lee, agreed. Tackling all those design problems together as a group mimicked a future-forward workforce awaiting them.

“A lot of the projects I have done up to this point have been solo projects where I’ve been on my own. Now I have a lot of people in the class I can communicate with,” Lee said. “I can see what they’re doing, what is their design. Along with getting feedback from Shiz, I can change my design and accommodate their input. I’ve just been really enjoying the communication process throughout and how much fun it’s been, how interactive it’s been. It all flows together into a really nice project.”