From “One Small Step,” With Love

Born in Wuhan, China, Zhang came to the United States when he was five years old and resided on the East Coast with his family in Raleigh, North Carolina. He took an interest in both animation and movies at an early age, with films such as “Peter Pan,” “Bambi,” “E.T.,” and “Jurassic Park” in constant rotation.

Utilizing his dad’s Hi8 video camera as a kid, Zhang discovered that hitting the record button in rapid succession would result in getting one or two frames at a time.

“I would make my own little stop-motion, little short clips with Play-Doh, where it would be like a shape that morphs into a dinosaur that morphs into [a] person,” Zhang recalled during a recent phone interview. “That was, I think, some of the original kind of inkling of animation, but I had always loved just making little shorts and little things like that.”

He would go on to receive his B.F.A. in film studies and production at the University of North Carolina at Wilmington before later enrolling in the Academy’s School of Animation & Visual Effects in 2007.

“Pixar was starting to become pretty big and had always included the behind the scenes DVDs [with their films], and I realized that, ‘Oh wow, there’s like a whole team and industry behind it.’ ‘Cause I didn’t know how it worked,” he explained. “After that, I did my research, and I was trying to find schools that were really at the top of the industry, in terms of great teachers and great facilities. And I found Academy of Art University.”

Zhang earned his M.F.A. in animation and visual effects from the Academy in 2010. Shortly after, he was named a Gold Medal Winner in the Best Animated Short category at the 2011 Student Academy Awards for his thesis film, “Dragonboy.”

He went on to work for Sony Pictures Imageworks as an animator and did a stint at Wuhan University as a Visiting Professor of Animation. Zhang bolstered his already impressive resume during his time as an animator for Walt Disney Animation Studios, where he worked on award-winning films, such as “Moana,” “Zootopia,” and “Big Hero 6.”

With his parents’ spirit of entrepreneurship rooted within him, Zhang decided to branch out on his own, launching TAIKO Studios in 2017 both in Burbank, California, and Wuhan. “Basically, the idea was I wanted to bridge East and West through animation and create a new studio that would be able to tell these animated stories that had a universal tone but had some elements of Chinese culture using the best teams and the best know-how that I learned from the Hollywood animation system,” Zhang explained. 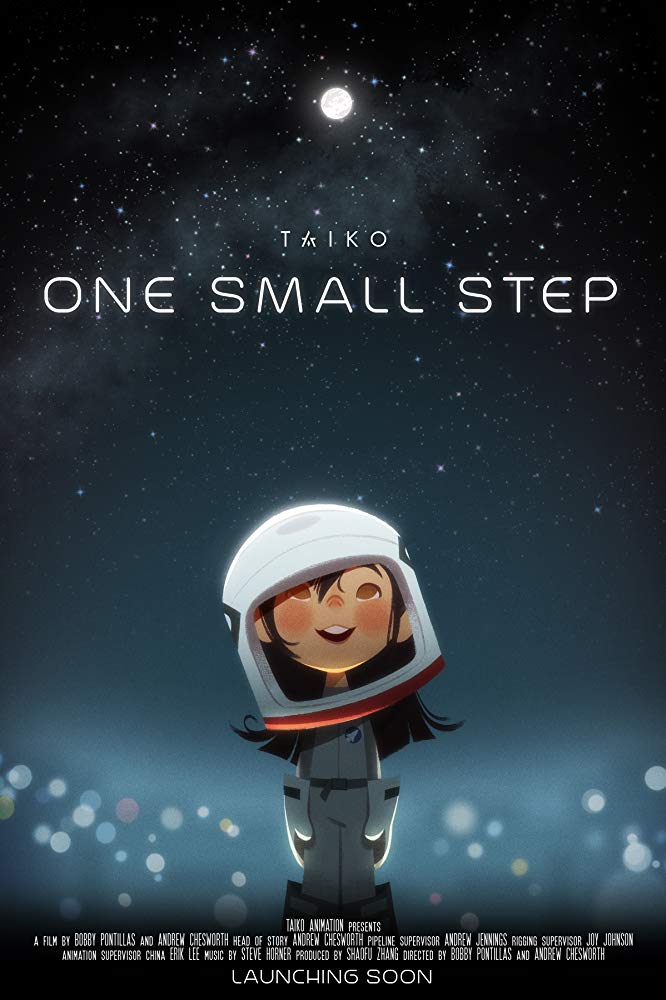 Joining him in this new venture were a few of his colleagues from Disney, including “One Small Step” co-directors Andrew Chesworth and Bobby Pontillas, TAIKO’s Head of Development and Art Director, respectively. Pontillas and collaborator Trent Correy had previously worked on the original concept for “One Small Step,” which Zhang welcomed Pontillas to bring with him to TAIKO for further development.

“It was just a very simple idea of this girl that wanted to be an astronaut,” Zhang said. “And I thought that was a really nice, wonderful idea. … It was just this concept; there wasn’t a script, or any boards, or anything.”

The animated short evolved into a story about a young Chinese American girl named Luna, who, with the constant support of her doting father, is determined to make her childhood dreams of being an astronaut come true. The spirited film is captivating from start to finish and will leave viewers moved. Zhang, who served as both producer and an animator on the film, revealed that the story was “a parallel to our own journey to become animators and to become artists in the industry.”

“If you want to be a Disney animator or if you want to get into this industry and just do [work] at that level, it is near impossible. It’s like going to the moon,” he explained. “One interesting thing that we all found in common was when you’re really passionate, when you were really hard working and you want to go achieve some very, very large goal, you start to get very narrowly focused on that goal, and you start to push away other people in your life, even though they’re supporting you—especially your parents. It kind of naturally happens, because you’re working so hard to focus on achieving this dream. Then once you do achieve that dream, the ironic thing is the people that supported you along the way there, they’re the ones that you think about the most, even though you kind of pushed them away to get to that goal. That is something that I think was a very big factor in drawing out the arc of what the story was about. It’s this love letter to all of the people that supported you to reach your dreams.”

Initially, the mission for “One Small Step” was to serve as a calling card for TAIKO. “The level of quality of the types [of films we create], the mood, the style, and just the general kind of feeling of what we want people to think TAIKO is,” said Zhang. “This is our first thing, so let’s make it great and let’s leave it all on the field. Let’s work our hardest and make it the best it can be.”

“One Small Step” made a splash on the festival circuit, where it was named an ‘Official Selection’ 69 times, and picked up 29 festival awards as well as two grand jury awards.

Cut to the morning of Tuesday, Jan. 22, 2019, when the nominations for the 91st Oscars were being announced. Zhang was woken up by a phone call from Pontillas at 5 a.m. “He was just screaming into the phone, and I was like, ‘What is going on?’ I had forgotten that the announcement was that day, ‘cause I was still a little drowsy. Then he was screaming. [Pontillas] said, ‘We did it! We did it! We did it! We’re nominated!’

“I thought I was still dreaming, and afterward I checked my phone, and sure enough, we were nominated, and it was just was surreal,” he said. “I was like, ‘Oh my God, we’re actually in the Academy Awards’; it just blew my mind.”

After learning of the Oscar nomination, the first person Zhang called was his mother to share the news. He then checked in with Chesworth as that morning’s announcement continued to wash over him. “We never really thought that it would get to this place, but [it’s] very humbling,” Zhang said of “One Small Step’s” nomination.

For Zhang, he strongly feels that his education has played a key role in his current success. “I wouldn’t be in the animation industry if I didn’t go to the Academy of Art. It’s just that simple,” he said. “I came to the Academy of Art not knowing anything about animation. I started from zero. It was all the great teachers: Tom Bertino, Chris Armstrong, Galina Rozina—the faculty was great. Just having that thesis program where you have to create your own short was this really great goal. … I think all of the classes there, the teachers most of all, I think, were the most important.”

Celebrating the Year of the Pig

A Series of Moves Towards Finding Her...