As long as there have been humans on Earth, there has been the art of sculpture. The first evidence of the art form dates back to the Upper Paleolithic age (well over 10,000 years ago) and as humans evolved across the centuries, the advent of cultures and movements across time molded sculpture along with it.

But as computers and technology became more prevalent in the 21st century, sculpture, as a craft, struggled to catch up, especially as digitized 3-D modeling softwares were introduced to artists. Digital sculpting sped up the creative process, while also offering a diverse set of tools without getting your hands dirty. It looked like sculpture was going to stay in the past.

Tom Durham, director of School of Fine Art—Sculpture (FASCU) at Academy of Art University, however, wants to avert that idea. Since joining the Academy in 2016, Durham and his staff have been adapting their curriculum to combine the traditional skills of sculpture with 3-D technology. He believes utilizing the two worlds modernizes an ancient form of expression without sacrificing the magic that happens when hands touch clay.

“Though it was important to create a program that is relevant for students today, I didn’t want to throw out the traditional skills,” Durham wrote in an article for Sculpture Review magazine’s “The Art of Digital Technology” issue this past summer. “Technology is only as good as the artist using the tools.”

Within his two years at the Academy, FASCU has worked to get the department facilities to support this revamped approach. As of this writing, FASCU has obtained a 3-D printer (that can print up to 24-inch vertical models), computers with ZBrush programs and a handheld 3-D scanner. Using this tech is new for the instructors as well (as instructor Daniel “DJ” Burt put it, “I’m old school,”) and many teachers had to volunteer their time to learn the new tools and programs. “Everything we do is really tied into the traditional craft of making objects and taking time to own your skill,” explained Burt, who has implemented using the 3-D printer and scanner in his Portrait Écorché (FASCU 270) class. “[We] really want to slow people up to understand what it is they have at their disposal.”

The idea is to still teach students how to model clay first and then scan the image into ZBrush. Being able to scale, zoom and view different angles can inform the students on how to rework or enhance the physical sculpture.

“They learn the fine art of sculpting first—the 3-D technology just gives the student more options,” Durham said. “For the sculpture department, it is essential that they have hands-on creative experience working from life and imagination.”

In his Sculpture Review article, Durham mentioned that sculptors employed within movies, gaming, collectibles or animation industries carry both the traditional and 3-D skills. Sculptor Mark Newman, a 1986 School of Illustration graduate, has worked in the film, gifts and collectibles industry. He was hesitant to incorporate 3-D tech into his work until he saw how efficient it was while working for Sideshow Collectibles, a collectible figurine manufacturer specializing in high-end film, TV and comic book statues. 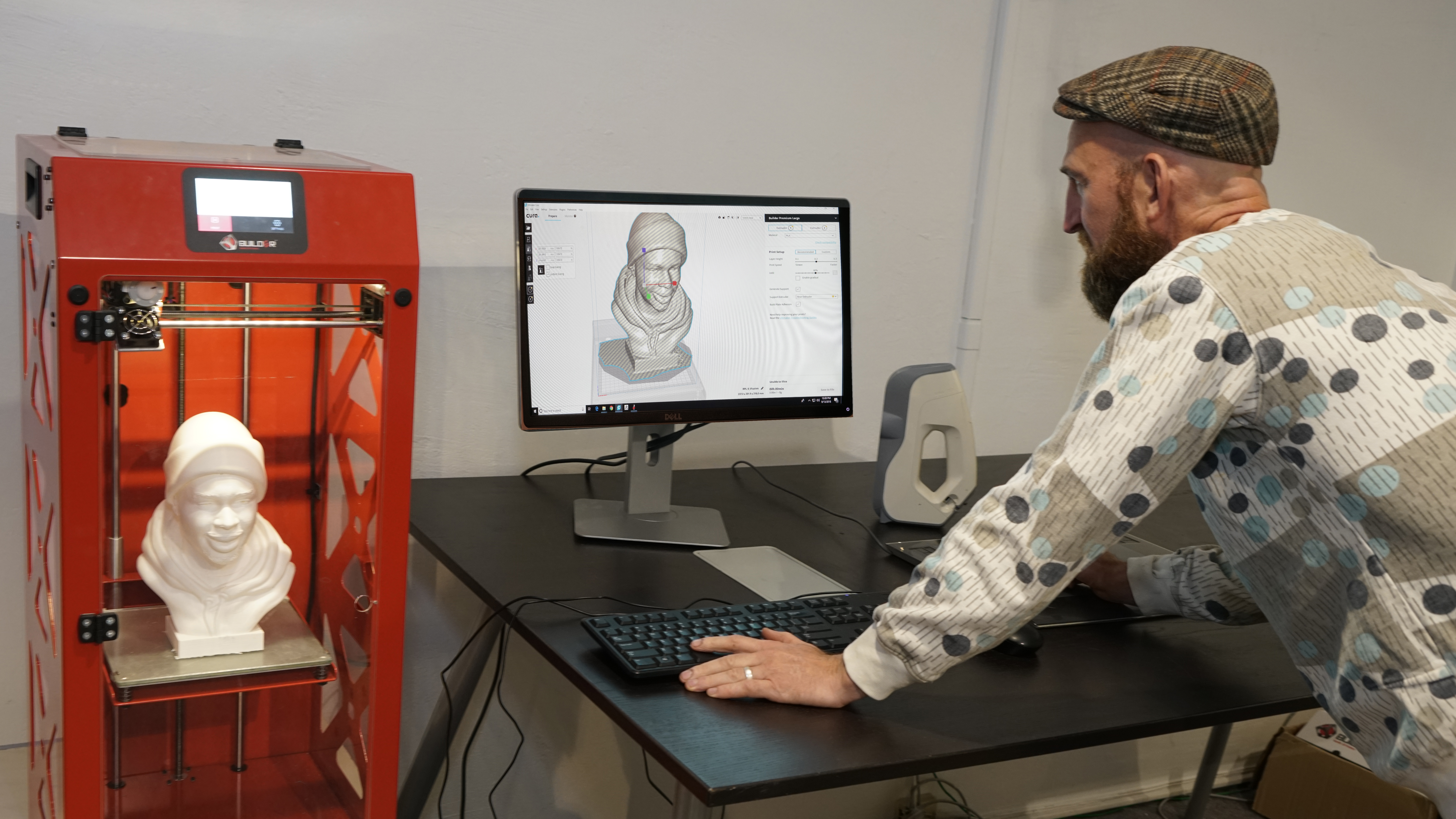 Students can use 3-D technology software, such as ZBrush, to edit and enhance their sculptures before printing. Photo by Bob Toy.

“[Sculpting] just became so much easier,” Newman admitted. He said Sideshow’s creative director still valued traditional sculpture but needs the company to produce in high volumes. Marrying fine art with tech was a means to meet those demands. “Even now, it’s hard to imagine doing a whole practical figure [without 3-D tech]—I have to build [the figure], then cut it apart and make a key joint for every piece, so learning to do that digitally was great.”

According to Durham, keeping up with the times doesn’t mean artists have to forfeit tradition. And learning new skills to be employable creative professionals doesn’t remove the qualities that make them artists, either.

“Bronze casting foundries are switching over or adding a 3-D printing process to their shops so students need that as part of their experience to keep up with the changes,” Durham wrote in Sculpture Review. “These are not new tools, these techniques can be used to enhance, and sometimes speed up, the sculpture process and give more choices for creativity.”