It has been nearly three years since the flames were extinguished in the 2015 Valley Fire, which, according to reports, burned more than 70,000 acres and destroyed more than two thousand structures. In Middletown, California, which was hit especially hard, one local man is still living in the remains of what used to be his home, taking shelter in a couple of trailers and an RV that he has rigged with ramps. (A recent stroke has left him wheelchair bound.) Recovery has been slow, but on a recent weekend in early August, students from Academy of Art University’s School of Architecture (ARH) headed to Middletown to join the nonprofit Hope Crisis Response Network to lend a hand to their Hope City Project to rebuild this man’s home.

The weekend effort was spearheaded by ARH 512, a course focused on participatory design and one of the three-course sequence that makes up the fifth-year design build curriculum for undergraduates. The project, and others like it that partner with community groups and nonprofits, forms an umbrella of courses and activities in the undergraduate department that the ARH 512 instructor Sameena Sitabkhan referred to as the Building Lab, or B.Lab, which she coordinates. 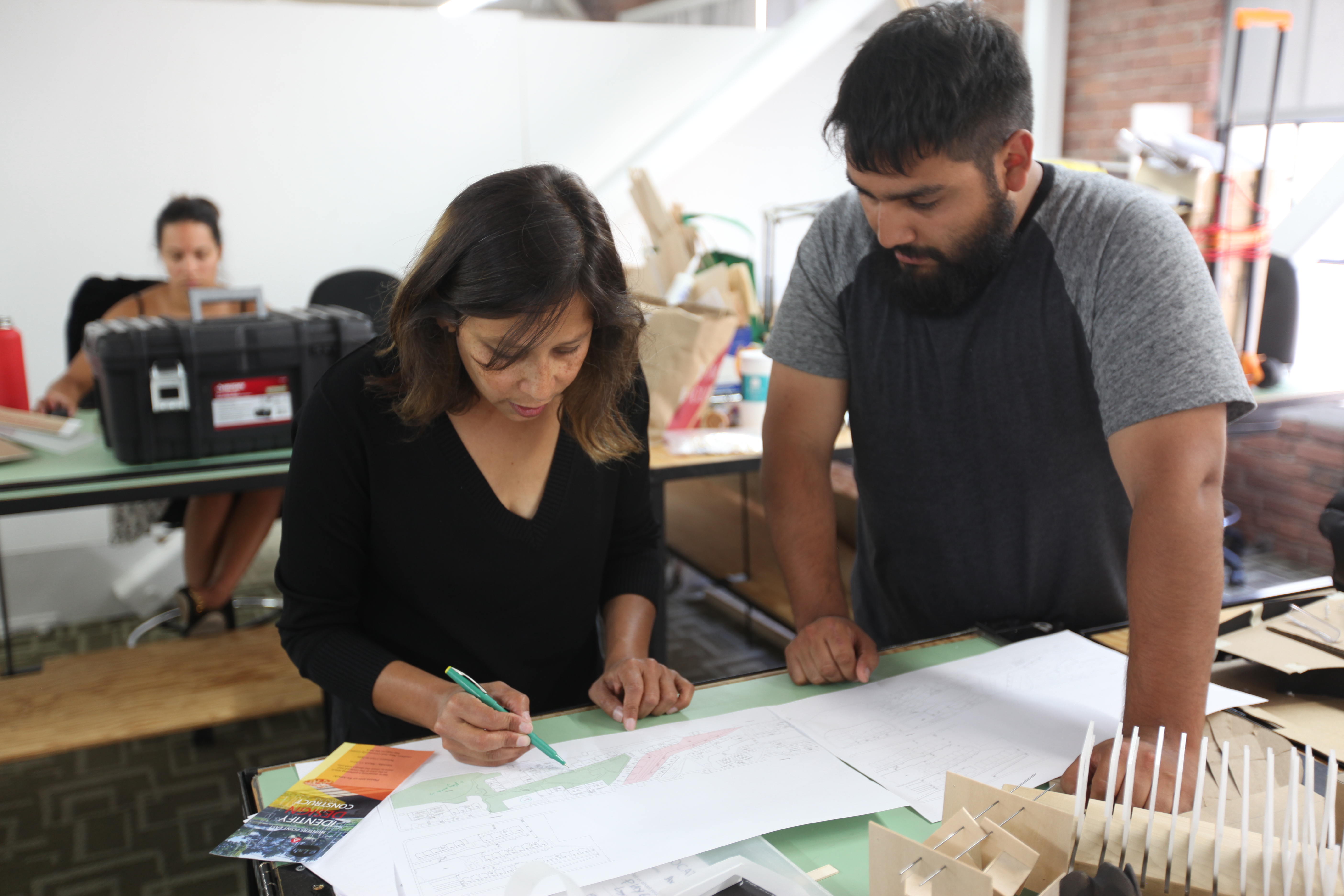 In the studio: Sameena Sitabkhan (center), Academy School of Architecture ARH 512 instructor and B.Lab coordinator, discusses a final assignment with Academy student Daniel Cervantes (right), who was part of the crew that traveled to Middletown, California, to rebuild a home destroyed in the 2015 Valley Fire. Photo courtesy of Kathleen Wu.

Past projects have served the homeless population in San Francisco. Another focused on building a deck structure for a residential community in Hunters Point. Ultimately, what Sitabkhan wants her students to build is a solid foundation of empathy. “We want to get the students out of the classroom and into the community,” she said. “Get them to know the people for whom we design.”

In Middletown, when the Academy crew arrived (a group of 10 that included ARH 512 students, two recent grads, instructors, and Undergraduate Director Jennifer Asselstine), the air was hot and smoky from yet another wildfire, the Mendocino Complex fire that was burning 30 miles away. That fire, which continues to burn, has consumed a reported 300,000 acres. The local Middletown High School and a casino that had once housed evacuees in 2015, were once again taking in folks fleeing the flames.

Sitabkhan, a first-generation Indian American who grew up in Los Angeles, had her own vivid memories of fire seasons, recalling fires breaking out at the end of October around the time of her mother’s birthday. But, she said, due to the impact of climate change, fires have been increasing in number and severity, and the season has started earlier than what she remembers.

And with a large portion of Northern California considered an extreme fire zone, 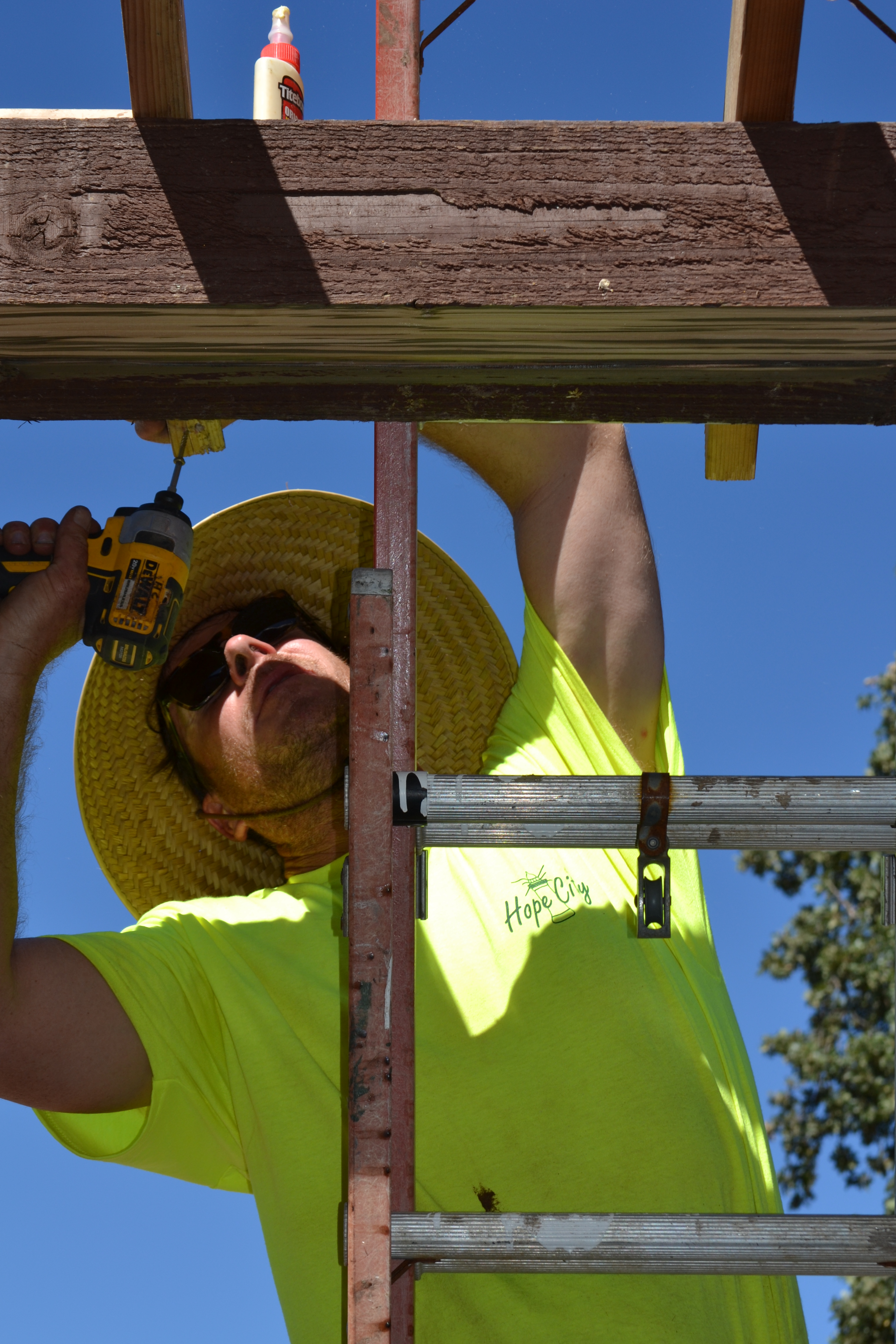 B.Arch student Kyle Pennington, who has 20 years of contractor and builder experience, utilized his skills to help lead the ARH 512 student team in Middletown. Photo by Jennifer Asselstine.

Sitabkhan felt it was important for students to learn first-hand about fire safety as well as the sustainability and durability of materials. “Start with looking at the fire-rating of all of your building materials,” she advised. “What is your house made of? And where are you building it?”

By the end of the weekend, Academy students had raised two new walls from the ashes. Sitabkhan said, “As architects we understand how walls are framed but we don’t actually, physically put them together ourselves—a contractor does that. So being out on a job site and doing that work ourselves was amazing.” She also said the project gave students a sense of purpose. “They’re not just out there throwing wood around. They’re building a home for a person who desperately needs it.”

Aleyna Carvalho, an ARH 512 student from Goiânia, Brazil, who spent the weekend in Middletown, wanted to continue engaging with the community. “I want to keep that connection between my community and my profession,” she said. Currently working full-time in retail design at a tech company in Palo Alto while she finishes her studies, Carvalho insisted, “Our job as architects isn’t only to build things, but to help society and the communities around us.”

The Animation Journey of Hanna Abi-Hanna

Rob Fisher Takes the Wheel of the Academy’s Automobile Museum

There’s an App for That: Architecture Students...