LAN participates in their fifth PARK(ing) Day, which gave students valuable real-world experience and highlighted the use of space in the urban environment

Every year on the third Friday in September, landscape architecture offices and firms across the globe participate in PARK(ing) Day, where designers transform a metered parking spot into a temporary public space. The idea is to call attention to the utilization of public spaces and how, especially in cities such as San Francisco, much of urban terrain is reserved just for cars.

“You count how many cars are parked in any area and the amount of gas in those cars,” observed Academy of Art University’s Director of the School of Landscape Architecture (LAN) Jeff McLane. “Those are resources that are idle; it’s not the most efficient use.”

PARK(ing) Day 2018 marked LAN’s fifth installment, which was held on Friday, September 21. Located across the street from the Cannery by Fisherman’s Wharf, a team of LAN students Katerin Luquetta, Felix Torres and Mollie Yang battled the Bay Area winds to set up their makeshift park. Using found resources, the students pulled together a concept that was efficient and engaging at the same time. 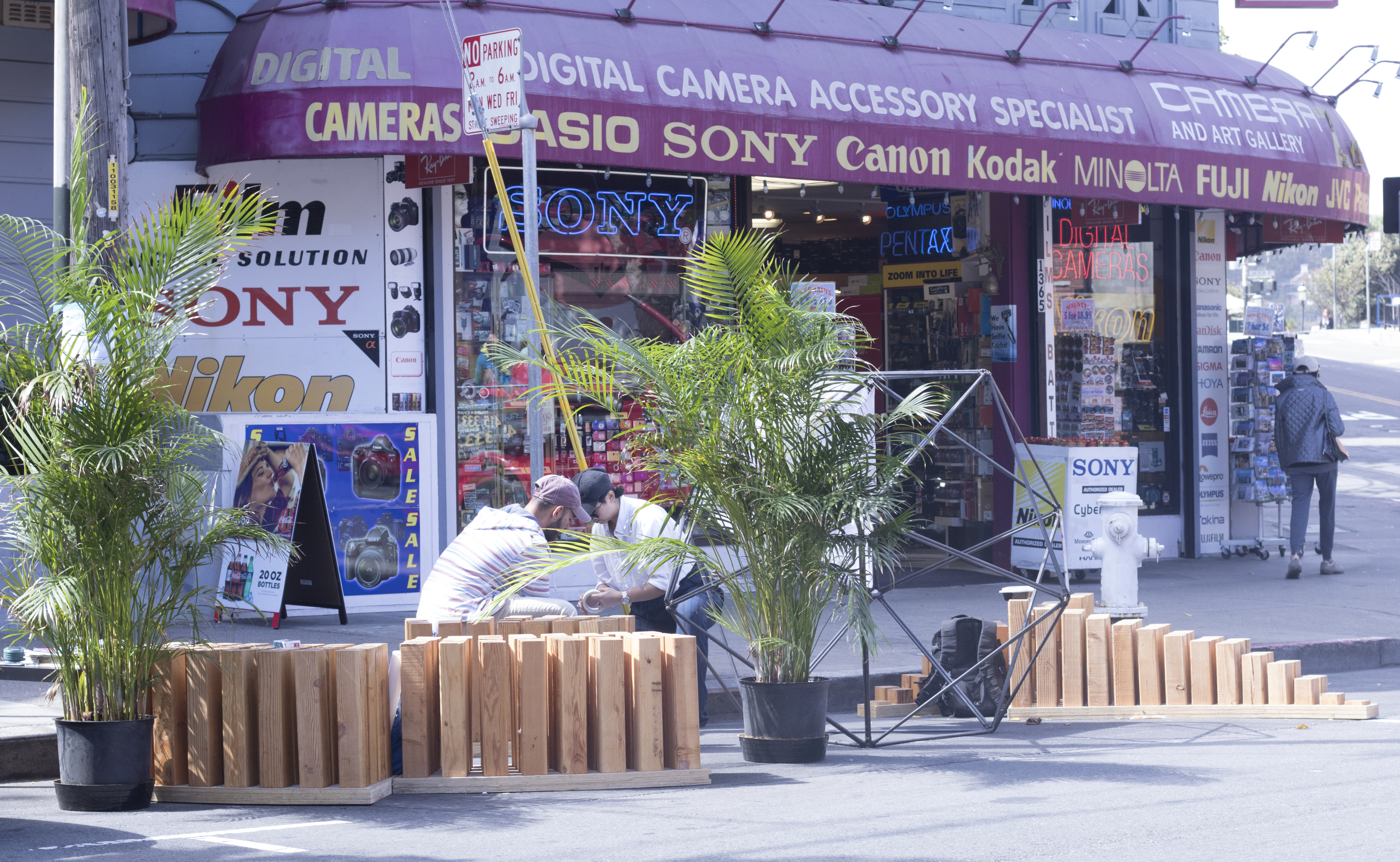 They took benches from the LAN office (originally made by M.F.A. alumni Nahal Sohbati and Eric Arneson for the 2012 San Francisco Flower & Garden Show) and deconstructed it to fit around the main component, a dodecahedron (or 20-sided die) sculpture donated by Shine Hatfield, a School of Fine Art—Sculpture (FASCU) B.F.A. student. With accented plants and wood around the centerpiece, the students added a fresh component to PARK(ing) Day, hopefully the first of many future multi-departmental PARK(ing) Days.

“We wanted to include [FASCU] with PARK(ing) Day, we wanted to work within this bigger theme of sculpture,” Torres said.

“I thought it was genius, they were literally marking a park in a parking spot,” Hatfield said, who got involved when FASCU Director Thomas Durham encouraged her to lend the steel piece, a big attraction for small children to climb on. Hatfield mentioned she hadn’t heard of PARK(ing) Day or its mission prior to getting involved.

“I’m really happy to be a part of it and really glad school is doing something about all this urbanization,” she commented. “It’s something that people don’t really put much thought into when cities are becoming more urban, putting up businesses and housing.”

Throughout the day, pedestrians passed by the impromptu park, curious as to what the space is about. According to the American Society of Landscape Architects (ASLA) website, PARK(ing) Day was first conceptualized in 2005 by Rebar, a San Francisco design firm, which eventually turned into a global movement.

Outside of shining a light on conservation and urban design, McLane views the event as an opportunity for students to work under a time crunch.

“(PARK)ing Day comes within two to three days of school starting, so they have less than a week to dive into that, plus they’re also taking care of their classes,” McLane explained. “But it’s still a good exercise because it’s small, contained and they can see how what they envision works out in the real world, in a real world space. That is valuable as a designer, to work under pressure.”

By and large, PARK(ing) Day was a success: the LAN students were able to draw in passersby with an improvised design concept, which was shared on ASLA’s Instagram as part of their PARK(ing) Day coverage. Halfway through the day, an on-duty parking enforcement officer noticed what they were doing and gave them free meter for the rest of the day.

“PARK(ing) Day is something they can quickly and easily do to participate in that connects with the community,” McLane said. “Even if it’s just people walking by, it gets them out of the studio and into the world.”

“The goal was to reach as many people as possible,” said Yang. “A lot of people stopped by and that’s what we really wanted.”