“Tremendous, in a word,” is how School of Communications and Media Technologies (COM) Director Jan Yanehiro described instructor Matty Staudt. In 2011, he launched Academy of Art University’s UrbanKnightsRadio.com (UKR), and since then, the student-run station has gone on to become one of the top three streaming radio stations in the United States, with over a quarter of a million listeners every month. Also available via the iHeartRadio app, UKR is one of the top three college stations in California.

“Matty was one of the first gurus in radio to see that radio had to go online. He was part of the Stitcher team and they created the first podcasting app,” said Yanehiro. “He comes [to the Academy], sees the vision for us, and he says, ‘Jan, it’s about branding, so UrbanKnightsRadio.com. That’s a brand. That’s who we’re going to be.’”

Yanehiro credits Staudt with getting students on board and listening to their input on the type of programming that UKR would air, from shows that focused on relationships to others that highlighted specific genres of music, like hip hop and jazz. Along with the on-air programming, Staudt worked with UKR staff in the creation of live, in-studio performances, first with Tuesday Tunes and, more recently, Monday Mix.

Along with overseeing UKR, Staudt created the Academy’s podcast course (the first of its kind!), COM 150: Introduction to Radio/Podcasting along with COM 250: Podcast Production and Promotion. “He’s pushing us into the future,” said Yanehiro.

With over 29 years of experience in the world of radio broadcasting and a trailblazer in podcasting, it’s no surprise that iHeartMedia, the leading media company in America, recently promoted Staudt to VP of Podcast Programming for iHeartRadio. (His previous role was Digital Program Director for the San Francisco iHeartRadio stations.)

Academy Art U News sat down with Staudt to discuss his exciting new role at iHeartMedia, as well as the growing popularity of podcasts, and how he works with his students in aiming to create a podcast unique to the platform. 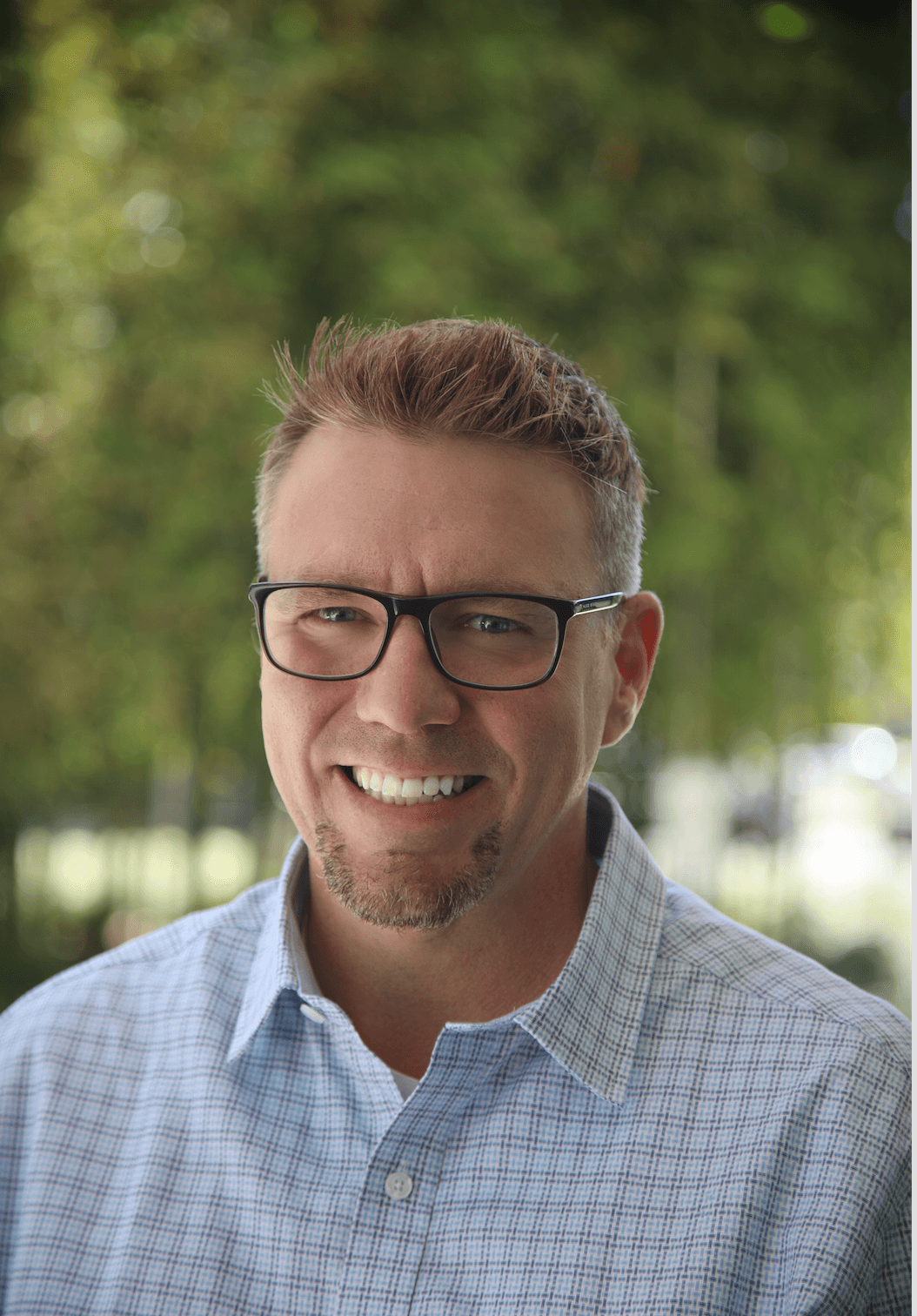 What does your role entail as VP of Podcast Programming?

We have 844 radio stations and we have some of the top radio talent in the United States working for us. My job is to work with them on creating a podcast and I’m coaching them and being a mentor, as far as podcasting. It’s kind of funny—it’s kind of like what I do here at the school. Radio is still pretty new to podcasting. It’s only been front of mind for radio for a couple of years, which it shouldn’t have taken that long. But I’m one of the few people in the business who has a ton of on-air and producing experience in radio and a ton of podcasting experience. So I’m kind of the perfect hybrid for this job where I can talk radio, I can talk podcasting.

Within your new role, how do you see iHeartMedia continuing to take up leadership in this growing medium?

We are now the second largest podcast producer in the world and we weren’t anywhere on the list a year and a half ago. So, it makes perfect sense for us. We’re the number one audio company in the United States. We’re the number one media company in the United States. Audio is what we do. So we should own podcasting just like we owned the radio space, and I think that’s where the push is.

My job here was to be the Digital Program Director, so I was in charge of social media, videos and podcasting. I’m a podcasting guy. I wanted to show what we could do when we put our attention on podcasting and we created 30 podcasts in the market and it was more than any other market had. I knew I wanted to be doing podcasting and the company was like, “Oh my gosh, look what he’s doing there. It’d be great if we could do that other places and do that all over the country.” So that’s why they made this job for me; this wasn’t a job before I had it. This is the first job like it in radio. There’s nobody else in radio that has that title and it’s cool.

Why do you think more and more people are being drawn to listening to podcasts?

It’s that intimacy and that shared experience. Podcasting touches a part of the brain that is also touched by reading a book. So when you read a book, you’re immersed into that world and in podcasting you get immersed into that world. And quite frankly, the world is not very fun right now in a lot of places we go. You know, when we go on social media, it’s arguing and politics and everybody’s angry. It’s kind of stressful to be a human being sometimes. And good podcasts take you out of that and put you in another place. You know, you don’t ever hear podcasts where it’s a bunch of arguing, like, that doesn’t work. Podcasting does need to be that escape. People like true crime podcasts, where it’s this kind of like, oh, what happens next? It’s a great way to turn off that part of your mind that’s constantly buzzing.

The act of listening to podcasts is very intimate. When you put headphones on, you know, you’re giving up to that. Usually, when you’re listening to a podcast, you’re not doing five things at once. You can, but for the most part, if you’re really into a podcast, it’s probably in your car, [or] you’ve got headphones on. That’s what you’re doing. When else in your day are you doing just one thing? Never! Always looking at your phone. And, I’m really bad about it. I think that’s why people like it.

In developing an original podcast strategy for iHeartMedia, what kind of podcasts can listeners expect and are they going to lean in a more music-based direction?

The first thing I tell anybody when they start a podcast is if you’re not passionate about what you’re doing, don’t bother. So it’s really going to depend. We’ve got hosts that have interests all over the place, but you know, of course we have access to celebrities and celebrity interviews that nobody else has; iHeart gets everybody. That’s one thing, like, instead of doing just short radio interviews, they’re these nice long podcast interviews. We just launched a new podcast, “Inside the Studio,” where we’re doing in-depth interviews with artists. The first one was with Mike Shinoda [of Linkin Park]. That podcast is a good example of what we can do on the music side, but I plan to hopefully see some podcasts about everything from sneakers to “The Bachelorette.” We do a lot of shows like that; it’s also like, what are our listeners into? How do we give them something else besides what they can get on the radio show?

You currently host a popular iHeart podcast, “Access Podcast.” What do you like best about talking with people about what they do?

I’m a firm believer that anybody that says “so and so wasn’t a good interview” says that because they’re not a good interviewer. I feel like everybody’s got a good conversation in them and has a good story to tell. I like finding out things about people that they didn’t expect to tell me, and [what] I really pride myself on when I’m doing an interview is having a list of questions but getting to none of them, and having that conversation that just kinda builds up and builds off of things. I really like that.

How do you work with your students in developing their voice for their chosen podcast topic?

People are always amazed when they take my podcasting class. The midterm is a PowerPoint. I make them really vet out a topic. Find out who else is doing it, why are you going to be different and better? Who exactly is your audience? When I do that with my students, I make them actually invent a person, and I need to know everything about that person. Because once they do that, and they really get into the topic, they really know that person, and then they can run that filter whenever they start to put content together for their show. Well, would “Kate” like that? No, that’s not “Kate” material. Everybody in my class knows “Kate,” because that’s the person I always talk about when I did Alice Radio. I had “Kate” who lived in Marin, and she drove a BMW, and I knew everything about “Kate,” so I always make sure that they work up before they even start producing the podcast.

[With] my talent in radio, that’s the same thing I do with them, which is “Okay, this is great. First of all, we’re not going to do a podcast about whatever goes through your head, because it’s not interesting to anybody. But, how do we refine that and then make that into something good?” And anybody who does that process with me always comes out of it. And when they do that process, I can be done. I can walk away, because they got the blueprint of this is the show, this is what it’s about. I tell people all the time, I do a show about podcasts, “Access Podcast” is a podcast about podcasts, and I have to run that through my filter, because I have guests that I want to interview who are celebrities that wanted me to interview them and I don’t, because they don’t have a podcast.

And finally, what are three podcasts that you listen to that you would recommend?

My favorite podcast is “Reply All.” It’s a podcast about the internet, and I know that doesn’t sound very sexy or funny, but it’s great. It’s the best. Like, tonight, I’m driving home, I can’t wait, because [the latest episode] came out today. I think everybody should listen to “S-Town,” at some point. It’s one of the most important podcasts that has ever come out, I think. And third, “Unqualified with Anna Faris.”

This interview has been edited and condensed.