Every year, the School of Industrial Design (IND) at Academy of Art University organizes an IND 494 class, or a Corporate Sponsored Project, to mimic a real-world scenario for its student designers. And every year, prepping for the final presentation goes down to the wire.

Some groups busted out glue and paint brushes for finishing touches, while others rehearsed their spiel with teammates. Slideshows had to be on point and video players needed to be ready to go.

This semester’s corporate partner was Fiat Chrysler Automobiles (FCA) who prompted the class to reimagine the Maserati and Alfa Romeo automotive brands for the year 2030. According to IND Director Antonio Borja, the objective was about challenging the brand while simultaneously respecting its Italian heritage.

“The FCA came in and established parameters, shared things they felt needed to be respected but not necessarily followed at all costs,” he explained. “They were open to new ideas as long as there was a valid reason on why to move in such directions.” 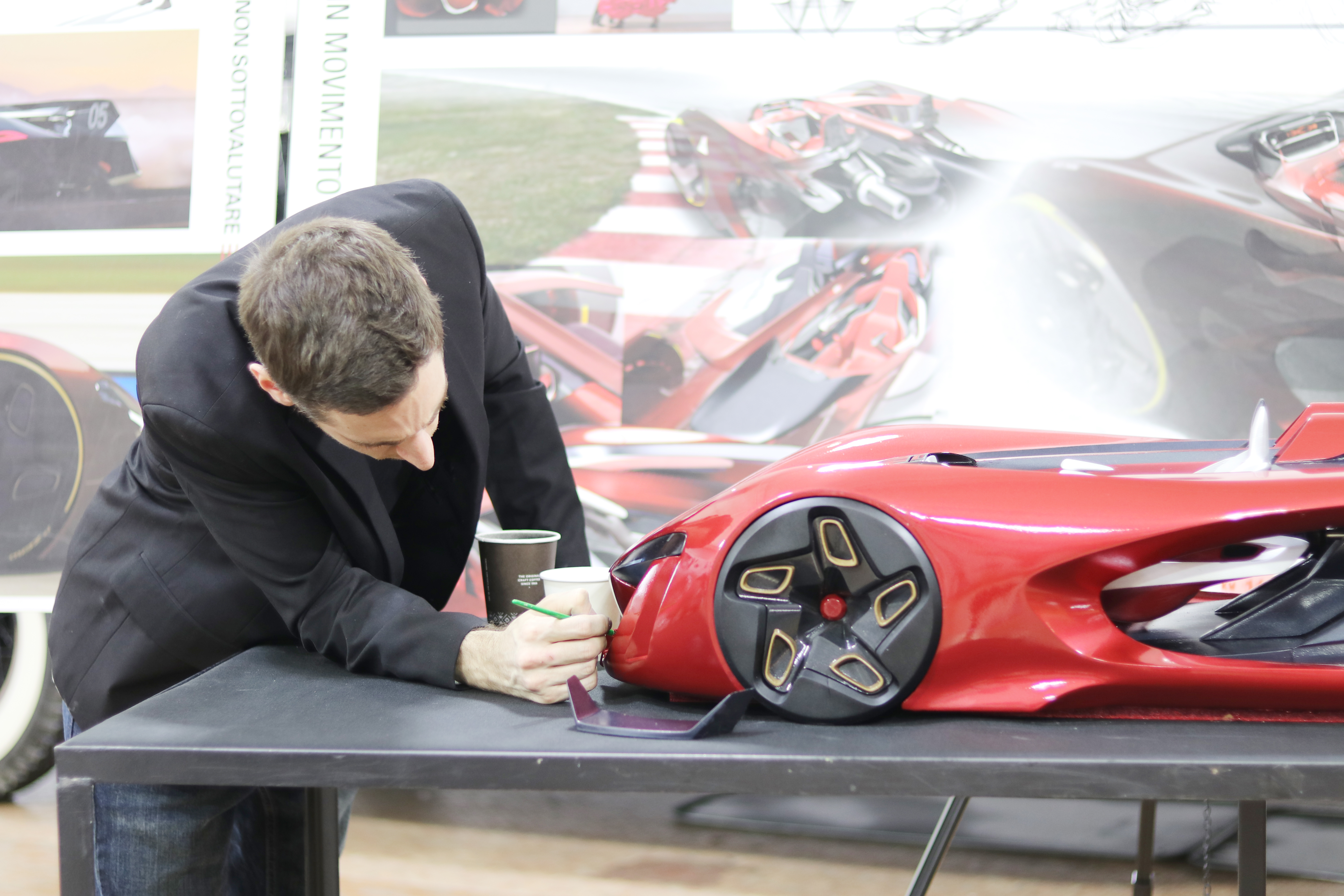 IND student Sean Wilson of the Gratiae team put the finishing touches on his project presentation. Photo by Nina Tabios.

One example was an Alfa Romeo supercar concept called Gratiae. Founded on a concept of “emotion-in-motion,” the group focused on the relationship between the driver, vehicle and road itself. To accomplish that, they decided the car’s seats would pivot while in motion.

“We wanted to push Alfa into a whole new segment and, as a brand, really kick it up a notch in a supercar realm,” said Gratiae Interior Designer Joseph Delariva, who explained that the rotating seats would reduce stress when the driver hits higher speeds. “Overall, we wanted to give the driver a completely new experience.”

On top of the rotating seats, Gratiae’s driver would also be outfitted with a suit and helmet that uses augmented reality as gauges on the car and the driver’s health. The class collaborated with School of Web Design & New Media students to integrate technology into the entire experience.

“That really gave the UX/UI designers freedom to create outside of a normal boundary or frame,” Delariva said. “Even with their graphics on display, it was awesome [that] we got to be more expressive.”

Compared to the forward-thinking Gratiae, the Barchetta group, designed for Maserati, planted its design roots in classic Maserati aesthetic but with an elevated twist. Inspired by the brand’s classic early 2000s Spyder, the group focused on making their car “pure, timeless but athletic and alluring.”

“We wanted to make a car that—not just a car person—but anyone [could] fall in love with,” said Kevin Chen, interior designer. “We wanted it to be approachable, but also make it hot and sexy as well.” 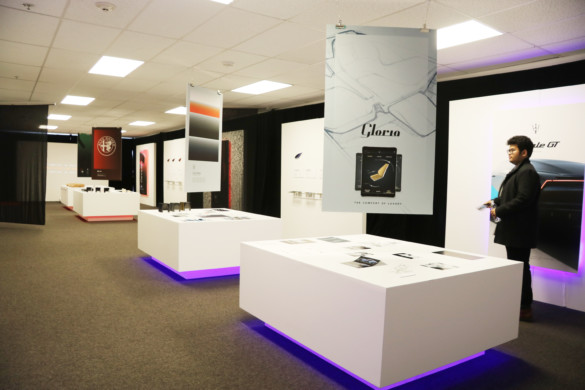 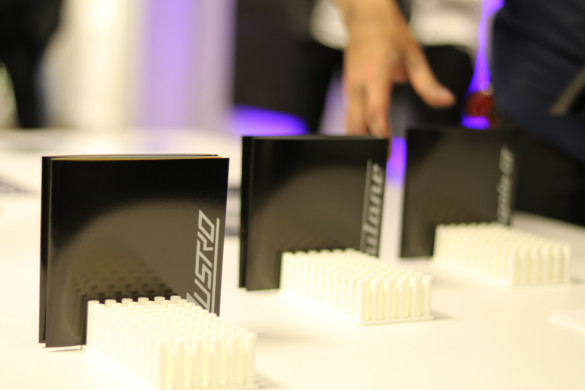 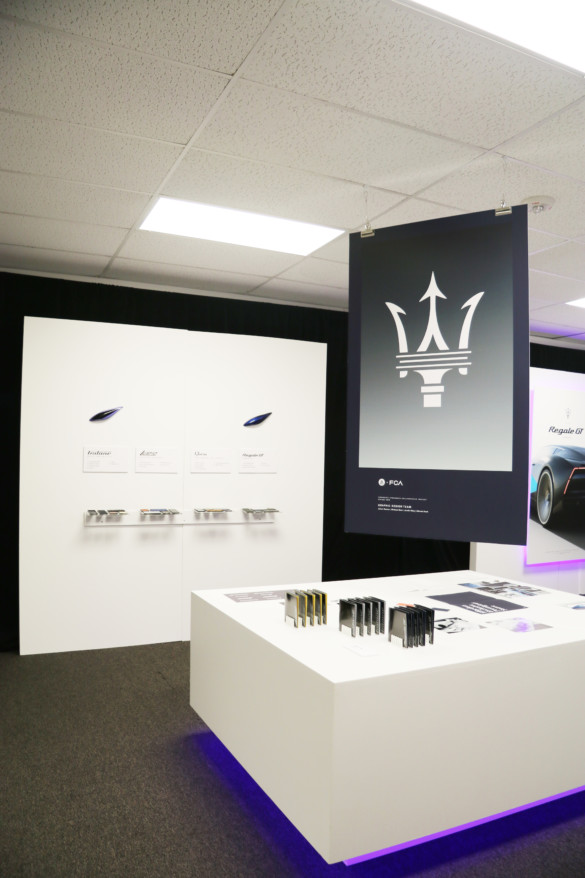 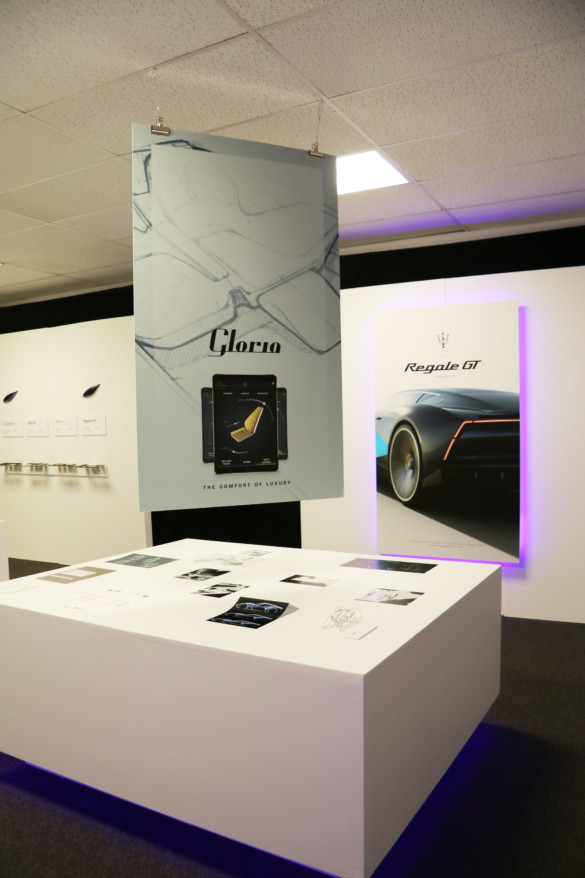 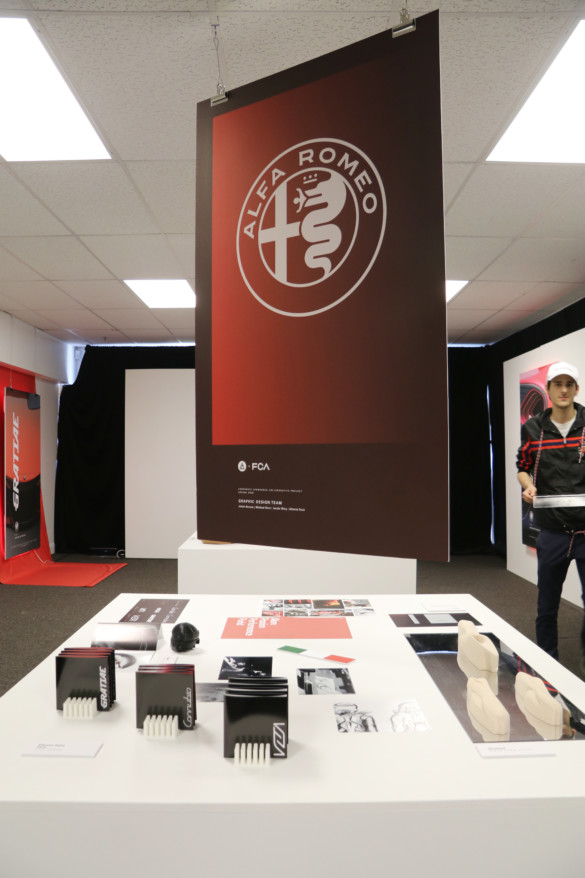 Using the clay model as reference, the students described the Barchetta as ‘voluptuous’ and ‘romantic’—words not often reserved for cars by average consumers—attributing their influences to stilettos and roses. Max Benon, the project’s exterior designer, talked through his process, including incorporating feedback he received from FCA reps at midterms, and wanting to “draw something more mystique, luxurious, [but] wanted to stick with alluring ideas that were toned down and more relaxed.”

“That’s what is considered an Italian car,” Borja commented. “It’s [supposed to be] drop dead gorgeous.”

Outside of working with a client, the Corporate Sponsored Project is also highly interdisciplinary. School of Graphic Design students were responsible for creating assets for both brands, creating mood boards, type fonts, color palettes and style guides for students to use. They presented these materials as a gallery prior to the model presentations, where FCA reps “felt they needed to be sipping wine,” as they perused the graphic design work.

Additionally, Emmanuel Atsin from the School of Fashion designed two distinct brands around Maserati and Alfa Romeo, creating pieces that spoke to the two prospective customers, one geared toward an athleisure look, the other more luxurious.

“I wanted one to be more edgy, whereas for the Maserati customer, I looked to Versace for inspiration and their customer is more established, she enjoys things that definitely take time and effort to create,” Atsin said of his concepts.

According to Akino Tsuchiya, one of the instructors for the course, the collaborative nature truly elevated the quality and level of thought that went into each project. “[Students from other departments] really brought their expertise to the class and you could tell that they really pushed and inspired each other,” Tsuchiya said. “It was a lot of really hard work and it shows.” 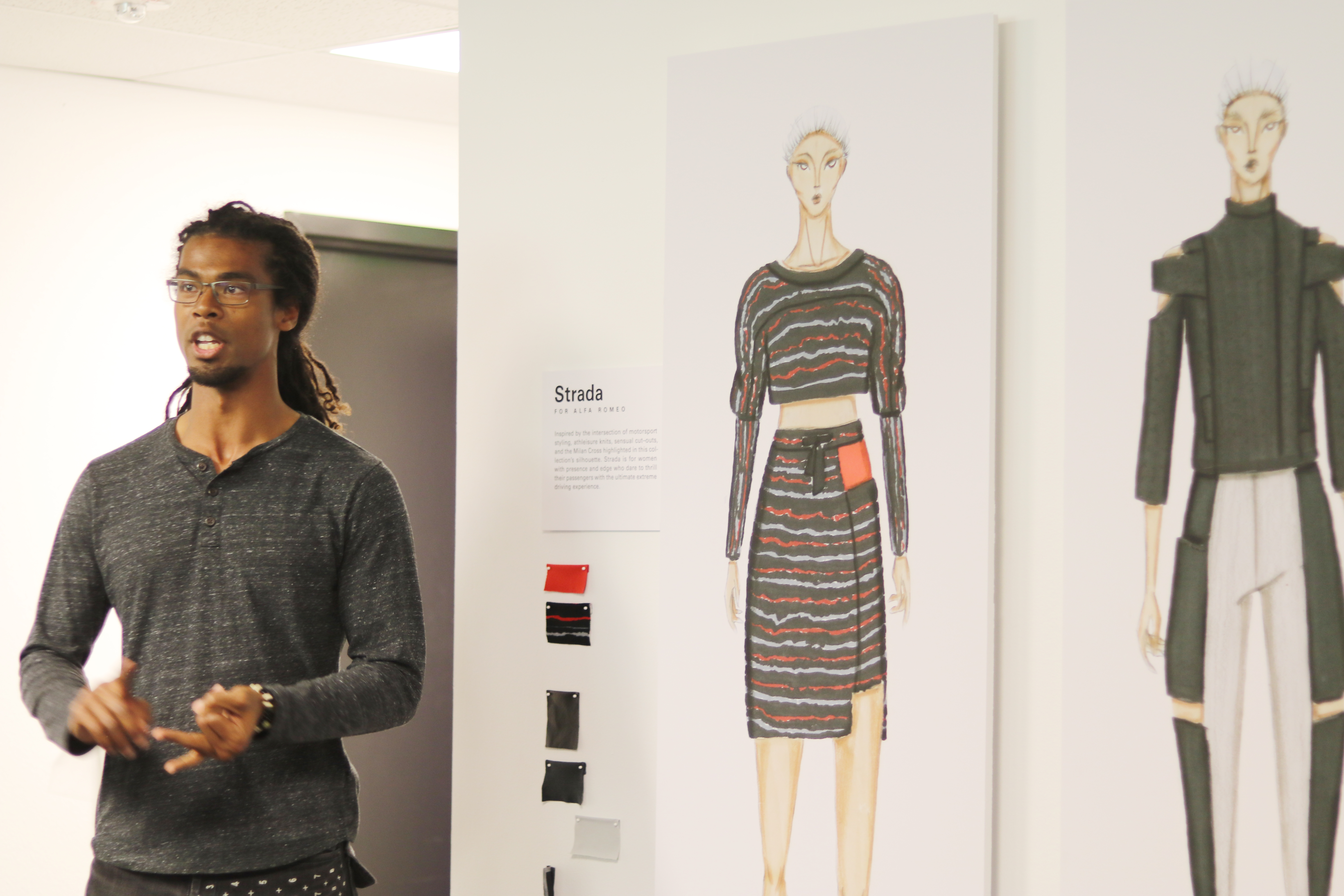 Emmanuel Atsin presents two prospective customers that he designed for both Alfa Romeo and Maserati. Photo by Nina Tabios.

The FCA representatives also recognized that feat, including Chris Benjamin, FCA’s fusion director and head of interior design, who praised the entire class and department.

“The interdisciplinary nature of the group was amazing,” Benjamin commented. “From the beginning, all the way to the end, having that much depth and color to the presentation really made you guys stand out. How it all tied together really showed they [were] inspired by each other, they grew and they learned from each other and that’s an inspiration to us as well.”

For Benon, the cure for pre-presentation nerves was having confidence in their project’s journey.

“With how much collaboration that we did throughout the semester and all the trials and tribulations we went through, it’s pretty easy to tell the story,” he said. “We just told the true story of the process and seeing their reactions while I was presenting just helped me loosen up. It was great to see they were happy with our progress. They critiqued it pretty hard [during midterms] because they saw the potential in it and they wanted us to turn it around, so that was the big victory for our group today.”