Art lovers have plenty of choices when it comes to buying coffee table books. But “CAST: Art and Objects Made Using Humanity’s Most Transformational Process,” brings something new to the genre. Touted by Artnet.com as “The Most Beautiful Art Coffee Table Book of 2017,” CAST celebrates pieces made through the process of casting—pouring material into a mold. The 448-page tome by artists Jen Townsend and Renee Zettle-Sterling features 800 images of a wide variety of contemporary and traditional cast creations.

Among the many artists who responded to CAST’s call for entries in the hopes of securing a spot in the book, three Academy of Art University School of Jewelry & Metal Arts (JEM) grads made the final cut: Leah Aripotch, Carmen Liu and Yucen (Wavy) Tang. 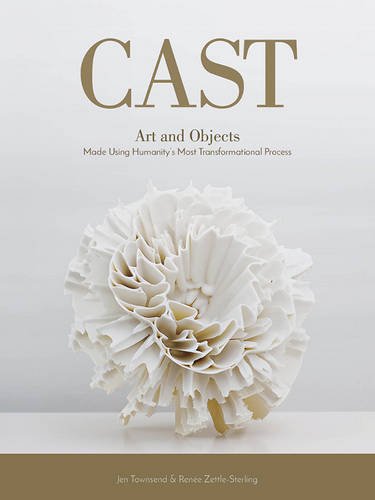 “CAST: Art and Objects Made Using Humanity’s Most Transformational Process.”

“Opening the pages of this masterpiece and finding the work of our students included among a list of international stars was amazing,” said JEM Director Charlene Modena. “It validates my belief that the rigor and high standards of our program—which encourages limitless and unique expression—inspires our students to be their absolute best as they become part of the professional world. I am so proud of them and their commitment to honoring their creative selves.”

Academy Art U News caught up with these talented young women to talk about this honor and find out what else they’ve been up to since leaving the Academy.

Even if you have a phobia of creepy crawly things, you may put your fears aside when you see Aripotch’s stunning metal insect and serpent jewelry and sculptures. One such creation—a bronze purse shaped like an egg with a sinister-looking snake coiled around it—earned her a place in “CAST.”

“I was ecstatic when my entry was chosen,” said Aripotch, who graduated with a B.F.A. in 2012 and now makes jewelry and other art in her Berkeley welding studio. “I didn’t really know what the book was going to be like. When I received my copy, I realized how beautiful and amazing it is.”

Aripotch spoke highly of the education she received at the Academy, praising all of her instructors and advisers. They included David Casella, John Fick, Margaret Keelan, Charlene Modena, Peter Schifrin, Wayne Shaffer and Anne Stryke.

“The foundation[s] program at the Academy primed me to go into more advanced classes with a huge understanding of the [metal] form and how to handle it,” said Aripotch. “I found the program incredible and received wonderful mentoring at the Academy.”

Mentoring continues to play a big role in Aripotch’s career. Because her metal shop is the only one in the warehouse where she works, she was feeling isolated. So she reached out to Nemo Gould, a well-known kinetic sculptor she’d met a couple of times, for support. Gould co-founded Lost & Foundry, a studio complex and gallery in Oakland.

“Basically, I told Nemo I’d love some mentorship and the opportunity to be part of a bigger community of metal fabrication sculptors,” she explained. “We met and he offered me a gallery space for my first solo show.”

Called “Flight or Fight,” the exhibition took place earlier this spring and was a success. It included a total of 16 old and new creations—five jewelry pieces and 11 sculptures. Aripotch said the show gave her the chance to introduce herself to the world and tell the story of where she came from and where she’s going.

“Putting on a show is a lot of work,” she remarked. “Nemo has been such a benevolent and generous mentor to me, helping me move through the more sophisticated process of being an artist, such as doing shows and interacting with clients. A big goal of mine is to be a mentor myself one day—it’s part of the cycle of being an artist. “

To learn more about Aripotch and her art, visit leaharipotch.com.

Liu was taking a risk when she decided to create a pair of oversized bronze origami rings while studying at the Academy. But it paid off. The rings—one is shaped like a flower, the other like a rectangle—now appear in “CAST.”

“I was so excited when I found out my rings would be in “CAST,” she said. “This was my first time being published in a professional jewelry technique book. It definitely made me more confident about my jewelry design career.”

Liu was inspired to make the rings when her Casting I instructor, Jonathan Russell, challenged the class to do something interesting with texture. Coincidentally, she had just purchased a book about making paper origamis with texture.

“I thought it would be cool to try and get that thin paper casted,” she said. “Jonathan encouraged me because he had never seen it done before. It took me almost the whole semester to finally get the rings casted the way I wanted, but I think the end result was worth it.” 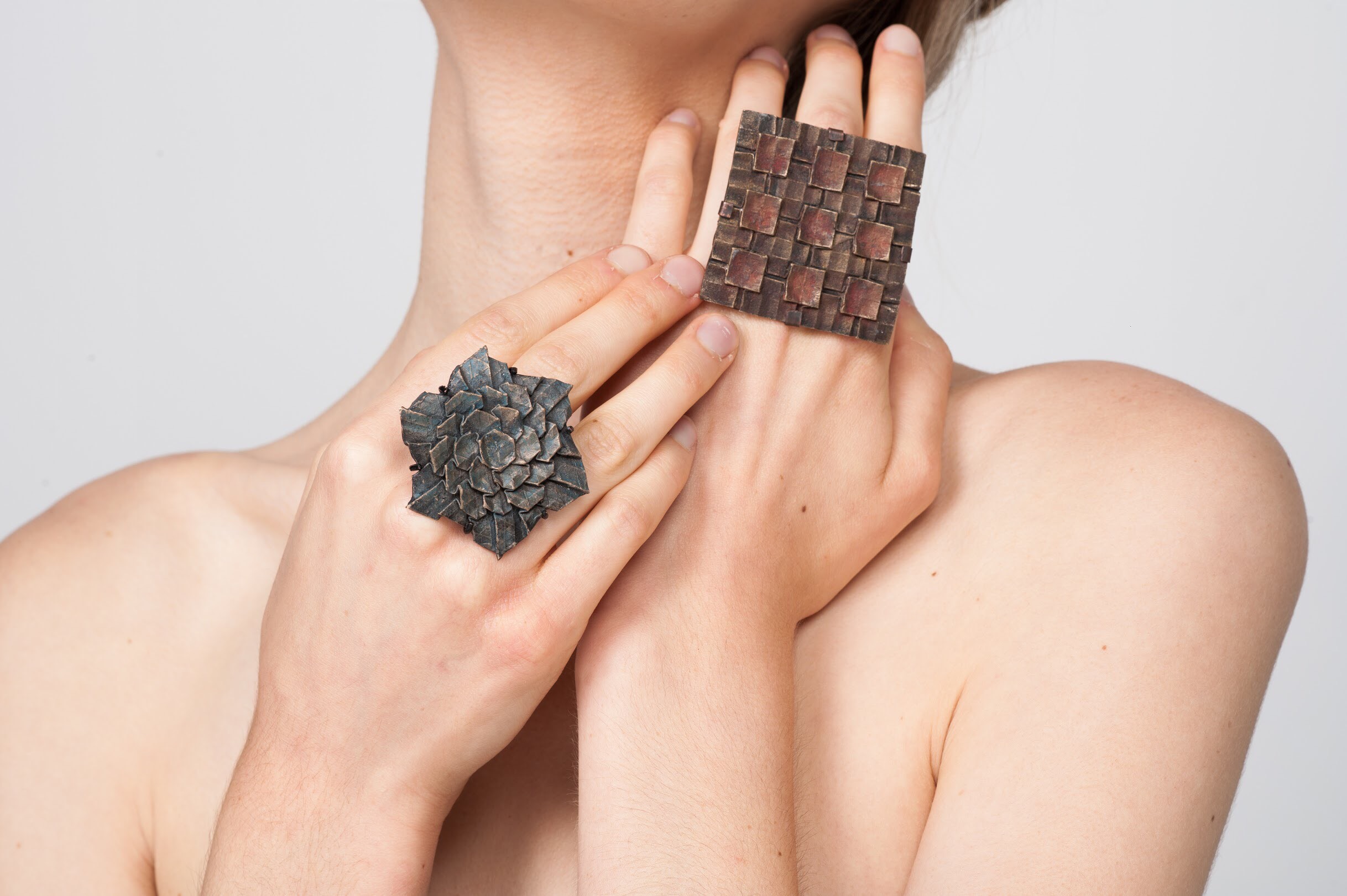 Bronze origami rings by Carmen Liu can be seen in “CAST.” Photo courtesy of Carmen Liu.

In addition to Russell, Lui appreciated her other JEM instructors and Modena for helping her understand, and develop a passion for, contemporary jewelry design. She enjoys combining modern design with traditional handcrafting to create elegant, sculptural jewelry and art pieces that pop with joyful colors.

After graduating from the Academy in 2015, Liu continued her education at the GIA institute in Carlsbad, California, where she learned more about traditional jewelry design. She’s now living in Japan and looking for a job in the industry there.

“I decided to come here because Asia’s jewelry trends are very different,” explained Liu. “I’m trying to absorb as much about the culture as I can. And of course, I also continue to design my own jewelry—I hope to have my own brand in the future.”

You can see more of Liu’s work on her website, carmenliuart.com.

“Mitosis,” Tang’s CAST entry, was inspired by an amoeba’s fluidity and ability to constantly change shape. The striking piece of art swirls around the lower half of a wearer’s face in a cascade of silver tendrils capped with organic, textured resin gems that resemble jelly-like amoebas or delicate wildflowers.

“The amoeba represents the amorphous way I interpret my identity, because I feel a similar instability when expressing myself,” said Tang, who earned her M.F.A. in jewelry design in 2014. “Its delineation is constantly in flux.”

The native of China was surprised and thrilled when she learned Mitosis would be featured in “CAST.” She thought submitting just one photo of her creation might hinder her chances since many artists submit multiple shots highlighting details of their work. In Tang’s case, one exceptional photo did the trick.

“I think the power of the image helped to show the atmosphere and concept of my work, thanks to photography major Jen Miyako McGown,” she said. “She collaborated on the photo with me.”

Tang noted that much of the work in “CAST” is made from metal while hers is predominantly resin and has a very modern look. Being highlighted in the book strengthened her conviction that innovative materials have a place in casting and contemporary art.

“It makes me more determined to continue experimenting with mixed-media in jewelry design,” she said.

Tang already had a degree in architecture when the urgent need to express herself through making jewelry spurred her to enroll at the Academy. Her background in architecture influences her jewelry designs.

“Studying architecture helped me understand how space works and how to manipulate it,” explained Tang, who reverses the practice of making small scale models to represent large buildings that she learned in architecture school when creating jewelry.

“I often imagine a piece being 200 times as large as the actual piece, and myself traveling through the positive and negative spaces of the jewelry,” she said. “It’s my method of understanding jewelry, and why my work is about space and three-dimensional design.”

Tang is now a product manager for a jewelry company based in Hangzhou, China. In addition, she provides concept and portfolio guidance to jewelry design students. And as if all that’s not keeping her busy enough, she also creates jewelry for her Studio Wavy line (studiowavy.com).