Architecture students bring their individual strengths together toward a common cause

After years of having worked independently on their own designs, Academy of Art University students from the School of Architecture (ARH) who were enrolled in the design build studio class ARH 498 had a chance to work in a way that design firms truly work—collaboratively, and as a team. Their semester-long project: re-design a community garden in Bayview Hunters Point, long considered one of the most economically disadvantaged areas of San Francisco.

ARH students have been working with different members of the Hunters Point community on a number of different projects, starting two years ago with their Point Perch project, taking an unused, drab space and installing a deck with benches as a community gathering spot, and most recently, Point Pantry, creating modular furniture that served Hunters Point Family, a grass-roots, commu-nity-based food bank.

This time, for their third design build project, ARH students partnered with the Northridge CommUNITY Garden to build an outdoor gathering and cooking space. The garden committee had received a grant to renovate the space and they were set, initially, on spending the funds on a pre-fab gazebo from a home-improvement store. But when they heard about the possibility of working with Academy ARH students to create something more customized and tailored to the specific needs of the community, they decided to partner up and put the grant money toward the materials that they would need. 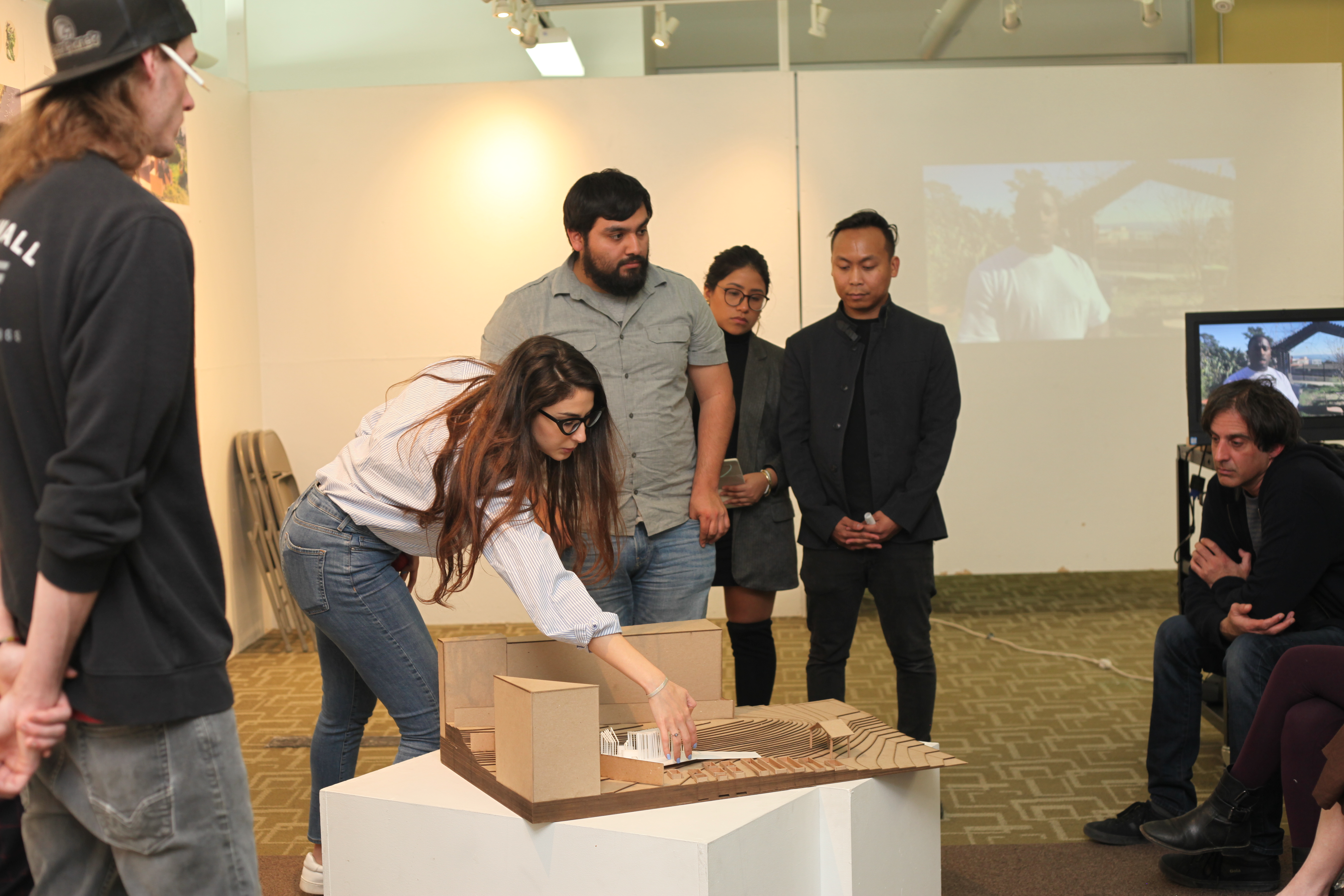 After site visits, community meetings, a youth workshop, and client meetings to present designs and generate feedback, the ARH team from the design build studio presented their work to the larger ARH community at 601 Brannan this past March. Sameena Sitabkhan, ARH 498 co-instructor and B.Lab coordinator, pointed out that having spent so many years together students “knew their individual trengths and how best to utilize them in a team.”

Krish Patel, a fifth-year B.Arch student who graduated in May, recounted how the team focused on three out-comes the community was hoping they would deliver. “They wanted the site to be accessible, and to include a gathering space for seniors and a performance space,” Patel said. “It’s not about us,” Jacob Delaney, a B.Arch student, who also graduated this spring, explained. “We’re not here to tell them what they need or what they should want.” A large part of the project was, he said, “about figuring out who they are.”

Patel described the process of their community outreach: passing out flyers door-to-door to encourage folks to come out to the meetings to discuss their needs. Daniel Cervantes, an-other fifth-year B.Arch student, described this work as “a dialog, having conversations and mak-ing sure everyone’s heard.”

Rhonuel Domingcil, a B.Arch student who graduates in December, agreed and explained how the team would integrate ongoing feedback with the information they gathered at workshops they first conducted with the community. 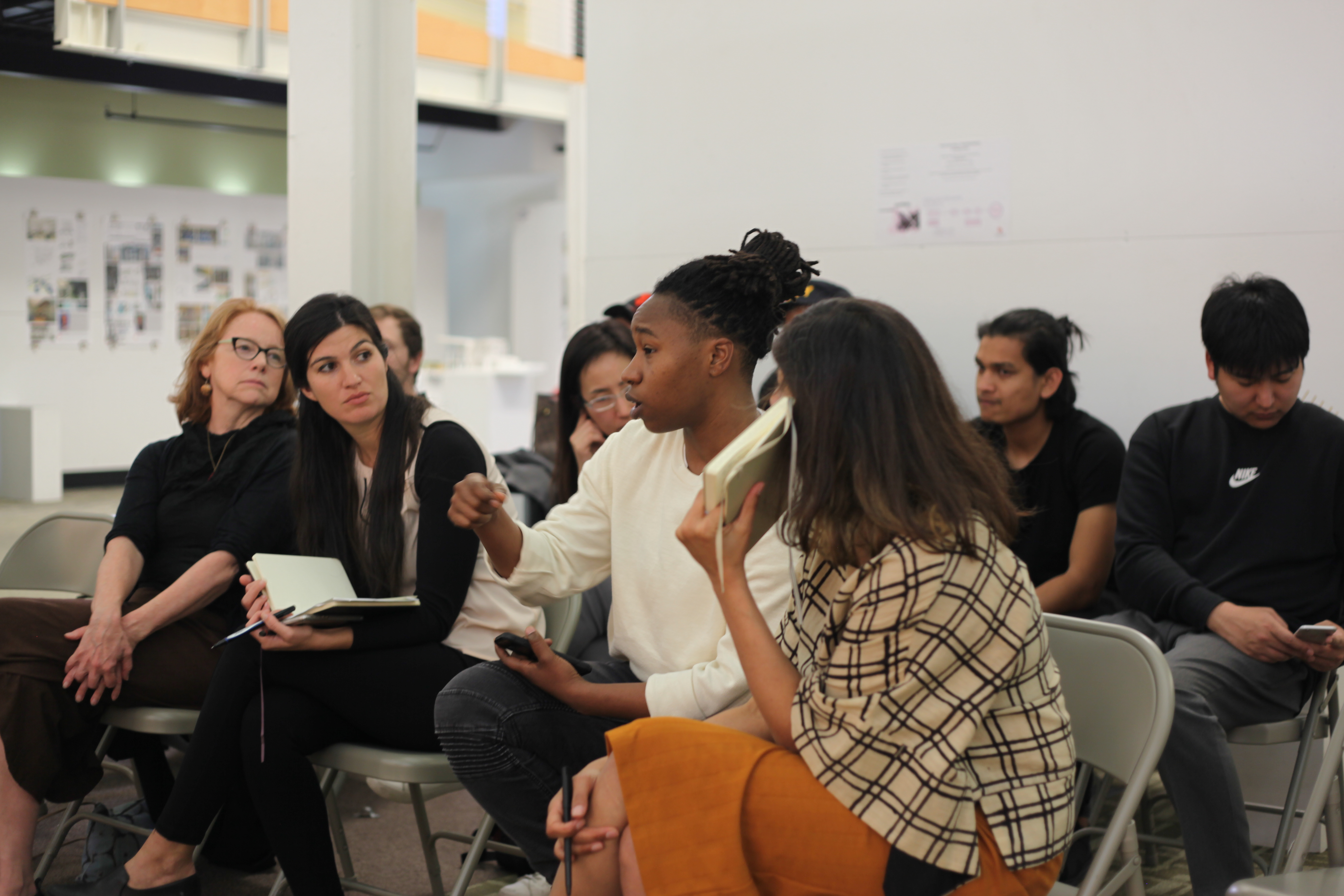 While the work had been a team effort among seven ARH 498 students that included Patel, Delaney, Cervantes, Domingcil, as well as Malak Bellajdel, Naomi Rojas, and Shunyi Yang, Harrison said the project allowed for a way to “get the whole school behind it” and “get other students involved” who weren’t necessarily enrolled in the studio class.

Mo Hampton, a second-year B.Arch student from Jacksonville, Florida, assisted with the youth workshop “helping kids with building models of how they wanted the space to look.” She recalled with amusement, how some youth were obsessed with a proposed barbecue pit—even while some of the more important building structures were left without roofs. She worked with eight high school students, and said, “Some got really creative.”

Danielle Andrews, a second-year B.Arch student from Southern California also pitched in. “I met with a couple of people who run the community garden,” she said, add-ing how excited she was about the fact that she was going to be a part of the team that was going to physically build the project.

“A lot of what we’ve been doing as students is conceptual,” Andrews said. “Now we get to engage a community and build to their needs, and our creativity comes into play.”

Delaney, who admitted that most of his design work up until now had been “personal,” said the Hunters Point project allowed him to pivot to more practical concerns about just getting the work done despite the potential for competing design visions, “You try to do the best you can,” he said, and stressed the strength of the team effort. “There was no way any one of us could’ve done this project on our own.” As for the feedback he heard during and after the project presentation, he said that he always looks at it “as an opportunity to further your education—to learn.”

From Classwork to Best-In-Class

A Taste of the Ad World