Academy of Art University graduates Therese Morgan and Mark David can both agree that the idea to hike the John Muir Trail started as a joke over dinner. What’s disputable is whose brilliant scheme it was to paint along the way.

Even saying they ‘prepared’ for it, is a bit generous, she admits. The two School of Fine Art—Painting (FA) alumni had zero backpacking experience to tackle the arduous 213 miles that make up the John Muir Trail, which stretches from Mount Whitney (the tallest mountain in California) to Yosemite Valley. But the trip still felt necessary—at the time, both Morgan and David felt like art had fallen out of their lives and they were desperate to reignite their passion and drive by any means possible.

On March 7, the 625 Sutter gallery hosted “Brushmiles,” an exhibition featuring David and Morgan’s fully-realized studio works based off study paintings made throughout that trip. Named after a term FA Executive Director Craig Nelson used to tell them when they were students, the show is proof of the literal miles David and Morgan put into their craft.

“I came up with that concept about 35 years ago,” Nelson said. “It’s fun to see they used a term that I had coined a long time ago, and they used it in a combination of the ways I intended for it, plus adding a new meaning to it.”

Friends and colleagues of the two artists dropped in and visited, admiring their individual styles and perspectives, but marveling more at the journey it took to reach that accomplishment. Academy Art U News spoke with Morgan and David about their 27-day adventure, full of dumb luck, broken gear, a community of strangers, and a whole lot of self-discovery and gratitude. 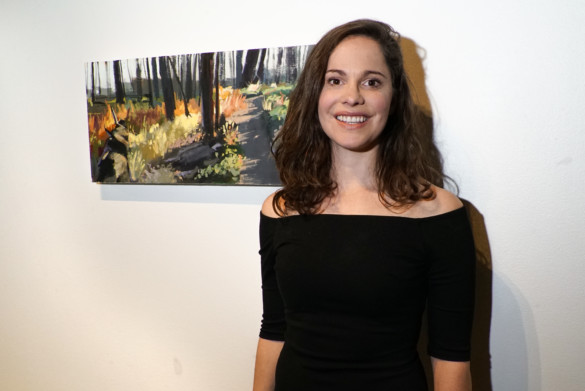 Therese Morgan and her painting, “Chasing the Day.” Photo by Bob Toy. 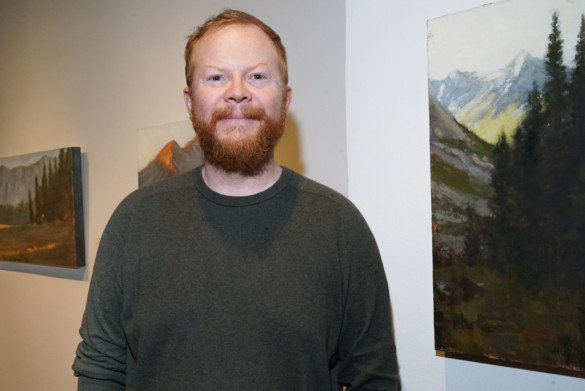 Mark David and his painting, “Sentry.” Photo by Bob Toy.

How did you guys come to the conclusion that hiking and painting along a 200-plus mile trail would bring art back into your lives?

Therese Morgan: It started as a dream of both of ours. It’s a bit ambitious just on its own because neither of us were backpackers, but it had just been on my bucket list. Postgrad, I was doing more figurative work. I got some initial success with that, but I burnt out within a year. Suddenly I couldn’t paint anymore and it was way too stressful. I just kept hitting all these walls and so that was actually the initial reason for this whole project, to begin with. We kind of both admitted to each other that art wasn’t as big a part of our lives as we wanted it to be or thought it would be. It was our way to push ourselves and do something a little crazy.

Mark David: Therese and I are both starting our own arts education companies, me in Los Angeles area, her in Texas. But I really missed my own artistic practice and I just felt so exhausted by the end of the day, wrangling elementary school children. At the end of the day, I wouldn’t want to paint. And I felt like it just fell out of my life, exactly what Teresa said, and so this whole project really helped us bring it back into our lives.

You guys took the trail backward—starting at Mount Whitney (in September) and ending in the Yosemite Valley (in October). Was there a particular reason for that?

TM: That was a result of part of our bad planning. [Laughs] We didn’t get the right permit and it’s hard to get [the Yosemite permit], in general. But our lack of planning in that case actually worked in our favor because the fires started during that time. If we had started in Yosemite, we wouldn’t have been able to do it.

MD: It was really unfortunate what happened but, for us, it worked out because we started south. So we never had to deal with the smoke. By the time we had gotten to Yosemite, it had gone away. We bumped into several people we had met on the trail and they said they had to stop and not go the full way. Even on the last couple days, it snowed and if you were heading southbound, we wouldn’t have been able to finish the trip.

TM: Before the trip, I had mulled over all the maps and written down where we would paint, where we would camp, everything. It turned out to be way less structured than that because there were so many ways where, for example, we know that this time of day is great for painting, but in the Sierras, sometimes you don’t see the sun until five o’clock because it’s behind a mountain. It ended up being so hard to time anything because we were constantly caught off guard a little bit, in terms of being behind in miles we needed to hike, or just being exhausted, or being really cold. It became more fluid in terms of at what point can we handle painting?

What were some of the rough patches that you hit along the way?

MD: There was one occasion where I had actually rolled over on my glasses and they broke in half and one of the lenses fell out. I wrap the frames with electrical tape, pop the lens back in. It’s not really working but we meet a guy on Glen Pass and he had superglue. In exchange, I had to help … him with his medication, an injection of steroids into his butt. So, it was like this great thing of kismet, where this guy needed something on a trail and I needed something. The reason I love that story so much isn’t that it’s gross or weird; it’s an example of how willing people are to help each other out on the trail. Everyone is willing to help you because we’re all like one broken water filter away from just being dead in the woods.

TM: The last day, it was raining and we both lost our rain covers, so all of our stuff was just soaking wet. But we couldn’t care. We had the biggest smile on our face. It was whatever, we were done, who cares. We had these stupid goofy grins on our face and everyone else were these weekend getawayers in brand new ponchos and they were so grumpy. And we were just going through, like, we’re home! But I don’t think they understood that.

Once the trip was over, did you feel like you achieved your initial goal of getting back in touch with art and painting?

TM: Both of us live in places that have air conditioning, with lights that work, electricity, all the things to make painting totally accessible and doable and still we weren’t managing to paint. It just wasn’t happening in [our] lives, so we go on this trip. But on this trip, it was like, what were we thinking that backpacking was somehow going to make it easier for us to paint? Painting on the trail was probably the hardest circumstance to put ourselves in to paint, on top of which was kind of funny and stupid, but also sort of worked. Because afterward, it was like if I could paint out there, then I could paint in my studio.

Looking back on it, do you think incorporating painting into this John Muir trip affected how you experienced the trail itself?

MD: At first, we wanted to do the painting because of how it would affect us; would this make us better painters because this is something we always wanted to do? The reason I’m really happy we brought painting into it is the sense of community on the trail. Bringing painting into it, it really forced us to have to stop and look. There is a kind of a trend to treat the trail like a treadmill—you just walk and you don’t look up. And when someone sees another person actually there and looking around, it makes you think like, “Oh, what are they seeing?” It gets people to stop and look around a little bit.

TM: There’s this quote, something like, “No artist can expect to have life in their painting if they don’t experience life.” You can’t be a true artist and live in your studio, you have to experience things. And I feel like it has a big difference.

This interview has been edited and condensed. Therese Morgan and Mark David are hosting two landscaping plein air workshops this May and August. For more details, visit brushmiles.org.