This past August, Chuck Pyle, director of Academy of Art University’s School of Illustration, celebrated his 15th anniversary heading the department.

A professional illustrator with a long and prominent career, Pyle was the 2015 recipient of the Society of Illustrators’ Distinguished Educator in the Arts award. These days when Pyle is not overseeing his duties at the Academy, he’s in his studio (a converted garage at his home in Petaluma) or he heads out to Carmel, the Sonoma hills, sometimes Telluride, to get in some plein air painting.

In a recent interview in his office at 540 Powell Street, where cable cars could be heard ringing as they climbed the steep hill just outside his window, Pyle spoke about his time at the Academy, first as an 18-year-old student, then a reluctant instructor in his mid-20s, and now as the 65-year-old dedicated director of the School of Illustration.

Did you draw as a kid?

I was born in Orange County and spent most of my growing up years in Bakersfield. There was next to no art to look at. Comics and editorial cartoons were the aesthetic high point. I did illustrations for my high school yearbook. Cartoons for the spirit posters. I wanted to be a political cartoonist, so I drew caricatures a lot.

How did you turn that passion into a professional career?

The only thing I liked doing was drawing pictures. It was the only thing I was good at. And then here I was in this amazing little hotbox container that was the art school back then. It was one building. And the School of Illustration was on one floor. It was a different time and I was very lucky to be here when I was. 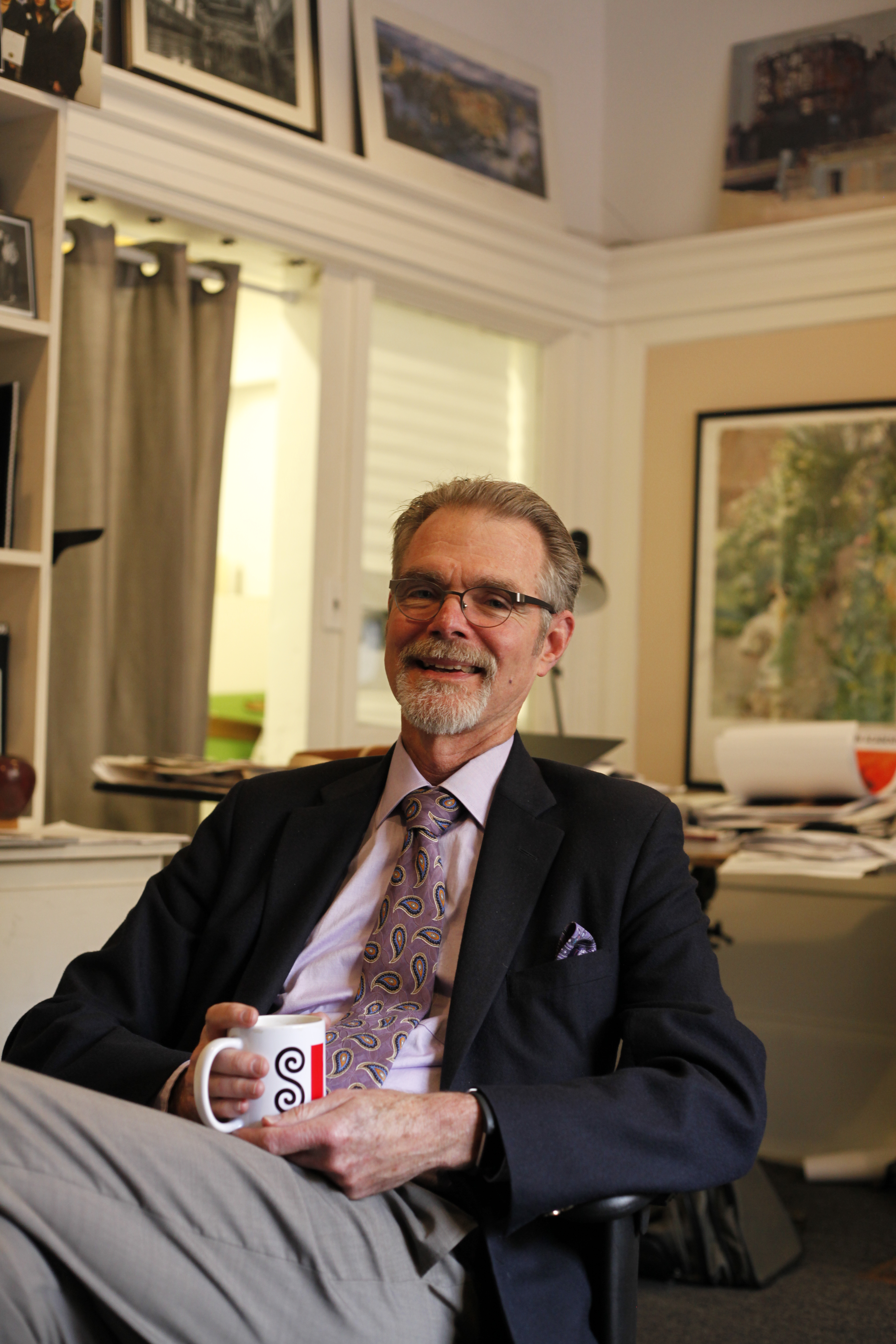 School of Illustration Director Chuck Pyle in his office at 540 Powell. Photo by Erasmo Guerra.

Who were some of your favorite teachers?

Barbara Bradley and Jim Sanford. Those two were the most important. Barbara Bradley really spoke the truth. Process. Passion. Storytelling. Drawing, drawing, drawing—and then turning the thing over and drawing it a hundred more times. Getting the story right. Doing the research. Having a good idea. Meeting your deadlines—or else! As she put it, “The only excuse you have for missing a deadline is if your wife died—and that’s not guaranteed.” Back in the day, San Francisco was a different world. It was so small then. You blow off an art director—and they all have lunch together—it doesn’t take but a couple of times until your career is over. You gotta be really, really creative, but you need to be a professional creative and turn it on and deliver it when they ask for it to be delivered.

Jim Sanford was the same way. He was a regional illustrator back when you could be that—before Federal Express. He was a deeply humble man and an extraordinary craftsman and artisan. And his humility and his generosity were instrumental in helping me get polished up. When I got to the end of my time here, he gave me an apprenticeship in his studio. He put me in a corner and lent me a drawing table and turned me loose. He helped me get my miserable portfolio together to show to people. One guy got sick or they overbooked and they let me take on that guy’s job—the most low-risk illustration job you could take. So even if I’d messed it up badly, that wouldn’t be the end of my career. And they published it. That one little opening of the door made a difference. Because once you’ve done something professionally, you’re a pro. And then they kicked me out. My apprenticeship was done.

Did you ever think you’d come back to teach?

Oh, heck no. Randy Berrett and I were roommates. We were both print illustrators at the time we got called back. The school was experiencing a population surge in enrollment and it was more than they could handle comfortably in the drawing classes. So Randy was asked if he’d come in and teach a class. They continued to have this enrollment issue, and I was brought in to teach. I was honored, and I was terrified to have to walk into a classroom of students—who are not that much younger than you—and teach them something meaningful and to take that responsibility for delivering something useful to them. And you had better produce some results because they’re counting on you.

It’s a sacred bond. It really matters what you say and what you model in the classroom. And you better own up to whatever you say and be very mindful of it. The joy, at the end of it, is seeing that they made progress. And that joy remains today. Except now it’s the net effect of not only what I teach but what the whole department teaches. We’re all one big family of committed artists teaching other artists. We take them in as a group and they all individuate before our eyes. When they leave here, they’ve become themselves—or really, really close. And you throw them out into the world and some of them go straight away to the moon, some fly around in circles, and some of them fly right back.

I’ve had students where I’ve had teaching relationships for four, five years after they graduate. A number of us as teachers have that open door policy. They may have graduated but sometimes they just need a nudge, a conversation. More and more recently, I’ll get a card in the mail, or I’ll run into someone out there—and I’m just delighted, I can’t tell you how proud and excited it makes me to know that those students are out there making their lives as illustrators. And that some small tiny thing that I did helped them get there. But it requires integrity. It requires honesty. It requires listening. It requires inquiry. Trying to be attuned to where they are and shifting your game with them so that you don’t turn them off on what they need to do and where they need to go. I want them all to go out of here and have a much better career than I’ve had. And a much better life than I’ve had. Which makes for some late nights when you’re staring at the ceiling praying about somebody, worrying about what their next steps are.

Where does that generosity come from?

I think you would find that in almost everyone here who is faculty. You have to remember what your teachers gave in their own generous way to you.

This Q&A has been edited and condensed. | Office Hours is a new monthly Q+A column featuring Academy of Art University directors and faculty.

Preparing for the Year of the Pig

In Pursuit of Fresh Ideas