Before departing Academy of Art University to begin their careers, graduating students from the Academy’s School of Graphic Design (GR) presented a collection of their collegiate work to instructors, peers, parents, and industry representatives at GR’s 2018 Winter Show. The annual event took place on Thursday, Dec. 20 on the fifth floor of 79 New Montgomery.

“The students graduating get the opportunity to interview, to talk about their experience, [and] what they’re interested in doing in their future as a graphic designer,” said Undergraduate Associate Director Tom McNulty. “It’s critical, because it’s just now becoming the beginning of their future, and they’ve put in four years of hard work and effort to develop a portfolio. So, this evening is very much to showcase everything they’ve produced here in that timeframe.”

The students presenting were a mixture of undergraduate and graduate soon-to-be-alumni who had completed Director Emeritus Mary Scott’s portfolio class. The course’s final project is a unique, well-designed portfolio book, which each student presents in an end-of-semester show. Using a printed medium as a template, they can describe and visualize both physical and digital-based projects. Some students even incorporated augmented reality. 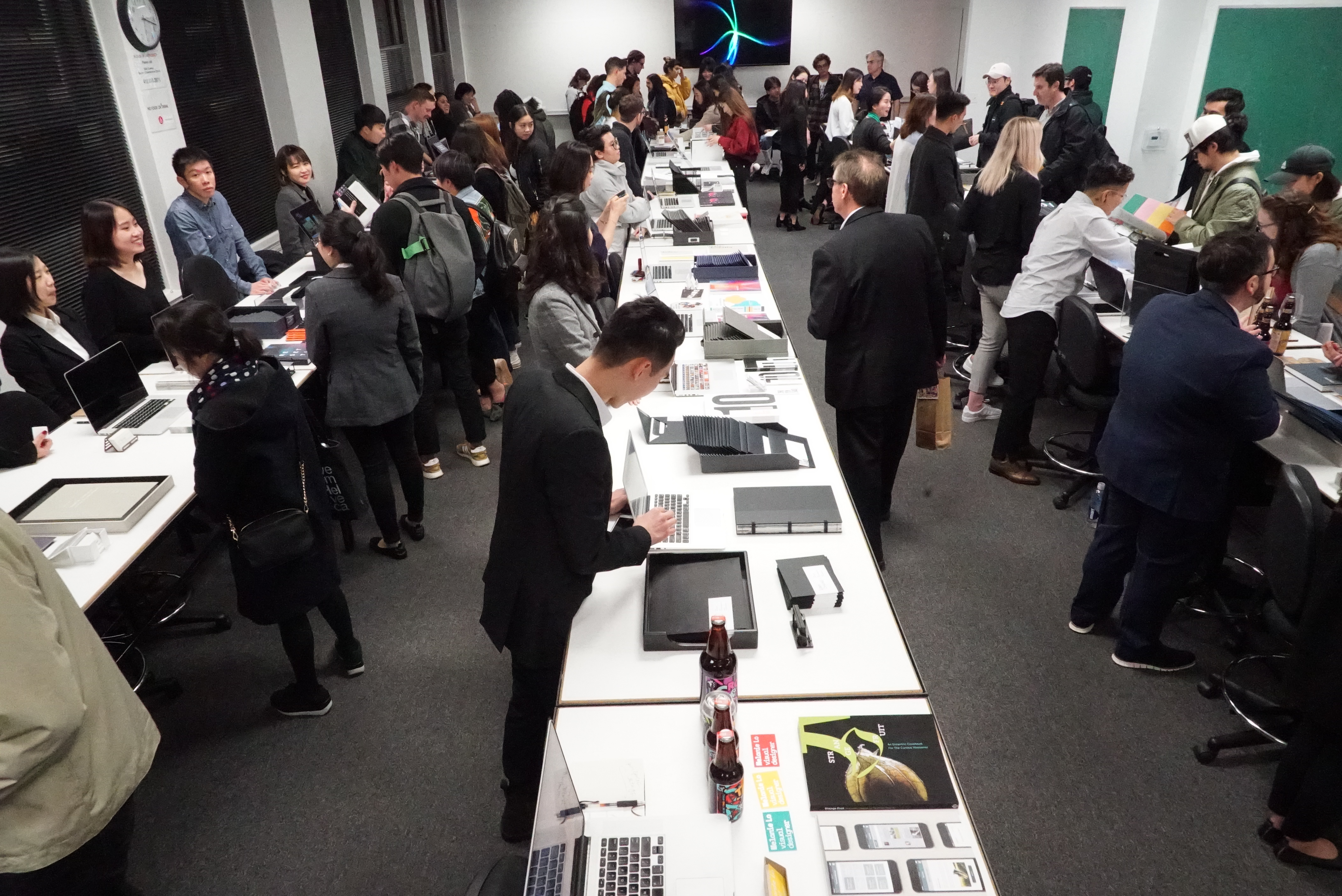 A bird’s-eye view of the 2018 Graphic Design Winter Show. Photo by Bob Toy.

The vast majority of the work featured in 2018’s Winter Show reflected each student’s background, vision, personality, and sense of humor, as well as skill and educational achievement. The result was a vibrant, and of course, very aesthetically pleasing, display of student talent.

“I realized they’re way better now than I was at their age, so it’s inspiring to see the kids and students get better and better, and push the envelope every single year,” said Lauren Mounce, an Academy alumna, senior designer at BBDO San Francisco, and Winter Show panel judge.

“There was a template that you could follow, and it’s not an easy template,” Mounce explained. “It’s very sophisticated, and the ones who stood out took that template and just made their own in some way.”

“I called my portfolio ‘Rice and Beans,’ because I believe that everything starts from simple ingredients, and so does graphic design,” Hanón said. “To develop a concept you first need something. It can be another designer, it could be an architect, it could be a smell, it could be anything. Also, I kind of love it, because it ties back to my culture.” 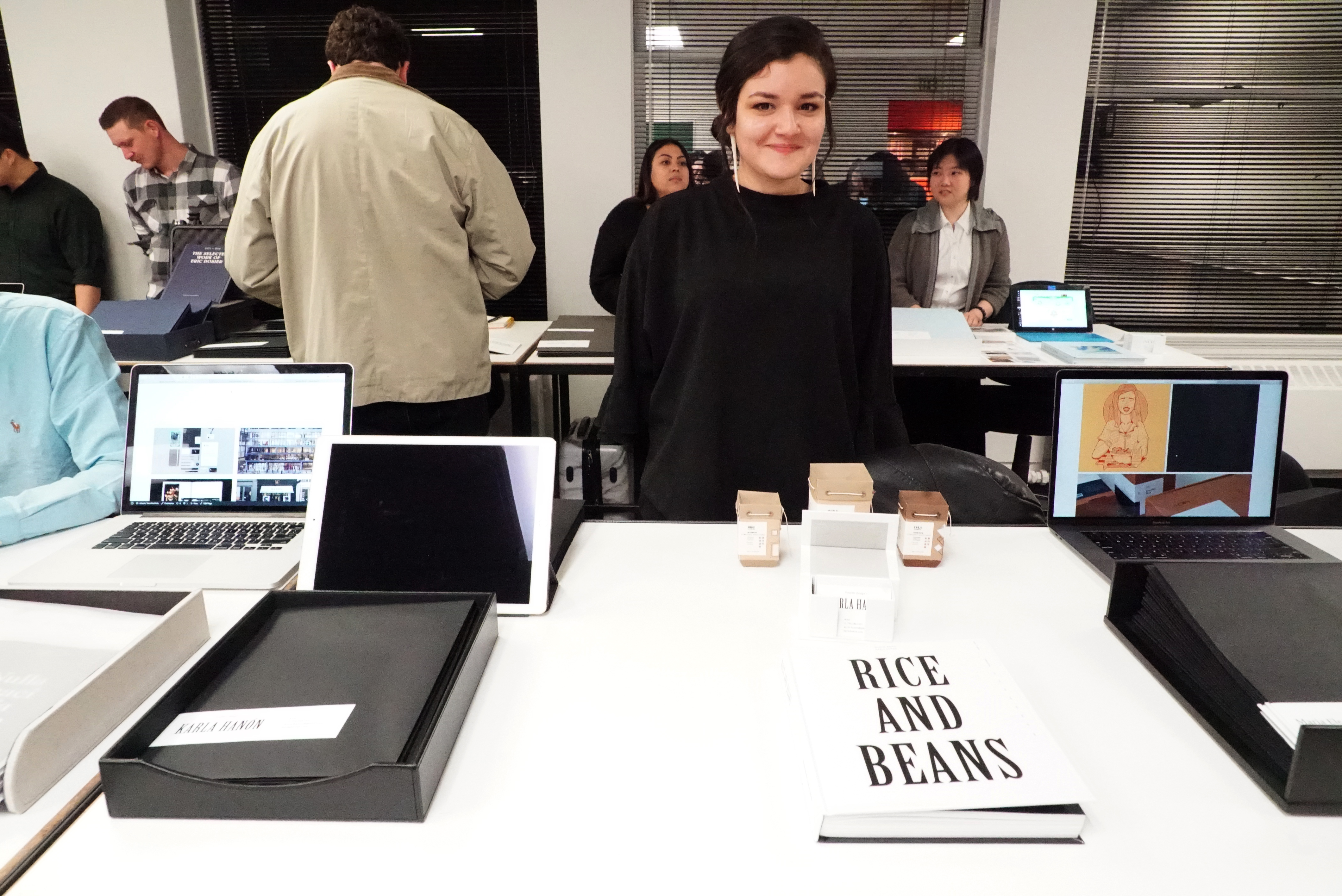 Karla Hanón was a recipient of an undergraduate award at the 2018 Graphic Design Winter Show. Photo by Bob Toy.

“I talk to parents and community members about food – about toddler food allergies. It’s kind of like food allergies are a serious problem, but people don’t realize it,” Yang explained.

Director Phil Hamlett encouraged the graduating students to “keep in touch” with other members of the Academy and return to community events and showcases in years to come.

“If you’ve talked to our industry guests tonight, you’ve probably ascertained that many, many of them are alums and graduates of the program who have come back to see what’s happening with the program, the wonderful ecosystem that we’ve established here,” Hamlett said. “Hopefully, you’ll continue to participate in that ecosystem long after your departure. I hope you feel that you can always come back here and call this place home.”