Drawing Himself out of the Darkness and Into the Spotlight

For Oliver Sin, School of Illustration (ILL) alumnus (B.F.A. ’95) and an Academy of Art University instructor at the School of Fine Art (FA), making art is a way out of tough times. He recalled picking up his charcoal soon after the recent Christmas holidays, while he was on academic break, and said he’d learned, “Whenever I’m dealing with something, I always pick up my charcoal, and just keep drawing and keep drawing.” He called it a way of healing, of keeping himself together—whole—rather than enduring an otherwise broken feeling. “I didn’t have a choice,” he said. “Things happen. I’m there. Making art is a way out.” 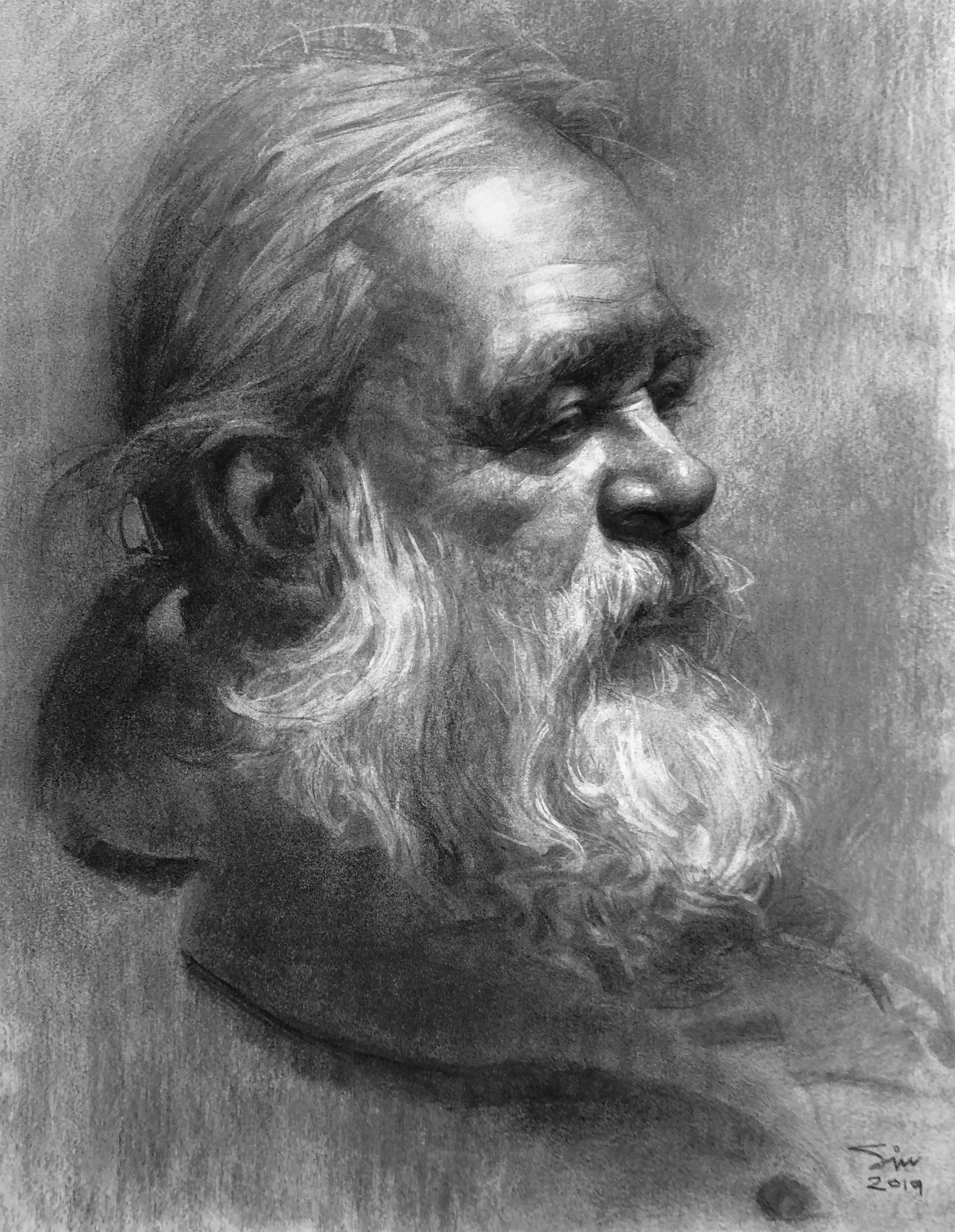 Bob, 14″x17″ vine charcoal on drawing paper, the artwork by Oliver Sin that is a finalist in the 2019 International Portrait Competition from the Portrait Society of America. Image courtesy of Oliver Sin.

The artwork that resulted from that time—“Bob,” made from vine charcoal on drawing paper—is now being recognized by the Portrait Society of America (PSA). And yet when he received a PSA letter informing him that he was a finalist in the 2019 International Portrait Competition, he had a moment when he wondered “Why now?” The work represented a difficult time that he admitted he was still trying to put behind him. “I think the judge who picked my artwork probably felt it,” Sin said. The final judging takes place later this month at the annual Art of the Portrait Conference in Atlanta and will include an awards banquet on Saturday, April 27.

An ILL alumnus, Sin recalled the early disappointment he felt when he first applied to the Academy’s School of Graphic Design (GR). Showing his portfolio to the then GR director, he was told, “I don’t think your major is in graphic design.” The teenage Sin was heartbroken. Instead, he was told, “You should go to 540 Powell and check out the illustration department.” At the time, he said, “I had no idea what illustration was.” And then he stepped foot into the building, saw the student work that hung in the halls, and it hit him all at once. “This is what I want to do.”

His biggest challenge as an Academy student he said were social skills and communications. Partly due to the language barrier (He was born and raised in Hong Kong). Partly due to the fact that he was shy. “I knew I could draw,” he recalled, “but I didn’t know how to communicate with my teachers and with my fellow students.”

He sees a version of this with his current students who rely perhaps too much on social media and other mobile technologies to communicate but still have a tough time relating to one another in person. And while he says he challenges his students about their screen time, he also learns from them, such as asking a recent teaching assistant about how to use Instagram, which he admitted was a platform that has allowed his artwork to receive more exposure and has led him to teach workshops around the Bay Area. He even received an offer to publish his work in a book—that book is due out in August 2019. (They are the same publishers who published William Maughan, the ILL graduate program director, whom Sin counts as a mentor.)

An Academy instructor since 2001, Sin has taught in a number of departments and is now in FA, where he teaches 2-D animation. He could still recall his first day in front of students—a six-hour class in layout design—Sin said he memorized a lecture that he’d written on 10 pages. “I was so nervous,” he said, explaining that he had notecards to remind himself of his talk. He only relaxed after those first six hours ended. “I over-prepared,” he said, and still remembered the pinched expressions on his students’ faces who must’ve been thinking “this is too much.”

He has since realized that he can teach in a variety of methods and not just a straight lecture. And he said it has since become his mission to “share my knowledge,” rather than just present and lecture as he did on that first day.

ILL Director Chuck Pyle has known Sin for years and said, “I have watched with admiration as Oliver has transformed his animation drawing and design sense to include lush value and shape based portrait drawing. Continuing to build your skills and follow your passions as an artist is the hallmark of a successful Academy alum.” He added, “Getting recognition for that accomplishment by the PSA confirms that the hard work and drive has paid off.”

And though Sin admitted that he’s still not quite in the mood to celebrate the recent recognition—he had not shared the news with anyone outside his small circle of family members and close mentors and colleagues—he said he will attend the awards banquet, which he’s taking as a way to move on with his life. On a brighter note, Sin said, “I look at the piece and I see it as a landmark to remind me that I’ve been there and I can deal it with and survive.”

Drawing Inspiration From a World Of “Pure Imagination”