Since he was a kid in single digits, wearing space suits to his own birthday parties, Forest Stearns had always known he wanted to someday bring together his two loves: art and outer space. But, as the newly installed Director of Art at Planet Labs, an aerospace company in San Francisco that designs, builds and launches satellites into the Earth’s orbit for scientific imaging missions, Stearns was stumped about how to slap his art onto the side of a satellite that needed to withstand the extreme elements of space.

That was the predicament that introduced Stearns’s talk at the recent TEDxSonomaCounty event held November 3 at the Jackson Theater at Sonoma Country Day School in Santa Rosa, California. A 2010 M.F.A. alumnus of the School of Illustration, Stearns was one of the nearly dozen speakers, artists, and performers who addressed the theme “Reimagine.” Amongst the lineup of community speakers, there were talks on everything from reimagining healthcare to a local rock and roll band, the Frankie Bourne Band, which came on stage to perform a song called “Better Version of Me,” about re-imagining the self.

For Stearns, it was about reimagining his own artwork. He’d grown up as a graffiti and street artist in Sonora, California, in the foothills of Yosemite. Now he wondered how to get his art onto the body of a satellite. In this case, the art was an illustration he’d made called “The Great Migration,” of a kaleidoscopic herd of animals in a headlong race to get to where their instincts were leading them. Stearns himself wasn’t quite so sure where to go. 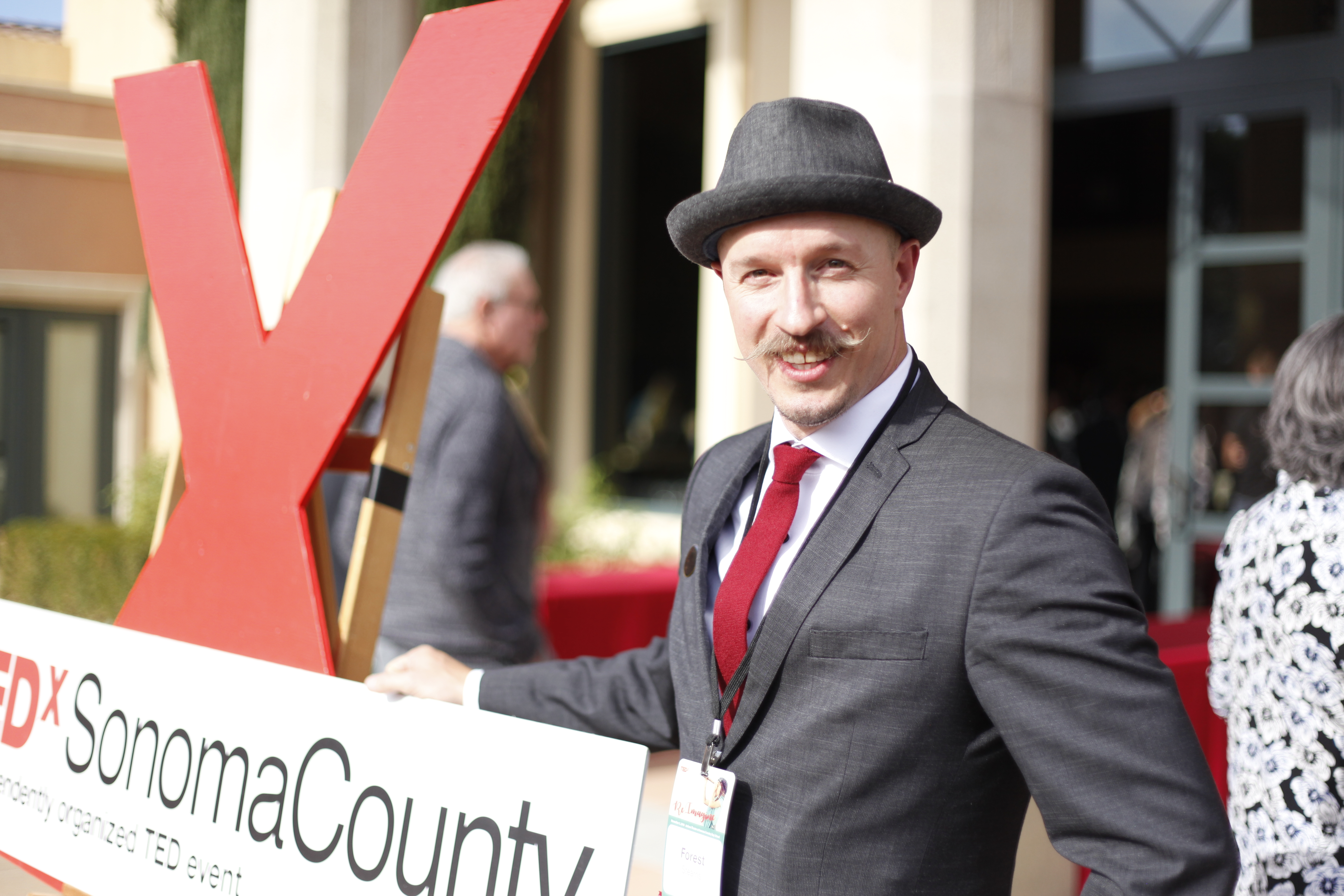 Forest Stearns at TEDxSonomaCounty. Photo by Radis Jensethawat for Academy Art U News.

“As an illustrator, you work directly with the client,” Stearns pointed out later in a follow-up interview. “I’m passionate about that. I love problem-solving.”

For this problem, Stearns tried a number of routes: he called up fellow artist friends. He called up local art supply shops. He connected with paint experts and chemists. But mostly, he said, he turned to his notebook, where he had logged years of artistic and creative practice. And then it hit him. His solution was not so much about adding paint or ink—or even taking a space Sharpie—to the satellite, but about subtracting from it through the process of laser-etching the image of migratory animals onto satellite panels.

He summed up the whole process in a single breathless manifesto, which he later tweeted after the conference: “Living your practice is giving yourself the ability to learn from yourself through endless observation and relentless execution, it is the feedback loop of learning your own unique creative language.”

After nearly five years during which he launched more than 340 art-covered satellites for Planet, where he also directed an artist-in-residence program that hosted 15 visiting artists (some of whom were fellow Academy alumni) and facilitated company-wide art nights, Stearns left Planet this past summer to continue his own solo adventure with Draweverywhere Illustration Studio, the company he established nearly 20 years ago.

Now Stearns is on a mission to give creative permission to everyone he meets (or speaks to from the TEDx stage) to let go of our fears, imagine our wildest creative dreams, and then encourages us to pick up the pen. “Creative practice is what makes you good,” he said, “and it’s what connects everyone. Practice is universal.” He has even given himself the moniker of Forest “Practice” Stearns. At the end of his talk, Stearns urged everyone to “go practice.”

Watch Stearns’s talk from TEDxSonomaCounty below.

Honing the Art of Videography

A Veteran’s Journey into Filmmaking