What better character to teach young children about the values of diversity than a talking, racecar-driving, space-traveling cartoon pig? That’s the thinking behind a new animated film by Academy of Art University School of Animation & Visual Effects (ANM) alumnus David McBride. Titled “Kazumi Racecar Pig,” the film follows porcine protago-nist Kazumi who, at the start, fears anything that’s different. After the intergalactic trav-eler crash lands on an alien planet—which is just about as different as it gets—he’s forced to confront his fears, exploring the unknown in order to find a way home.

The film premieres Saturday, July 13, at the Kimmel Center in Philadelphia.

It was based on a 2017 children’s book that McBride wrote and illustrated. It’s McBride’s second children’s book. He said he knew from the start that he wanted to make “Kazumi Racecar Pig” into a film. 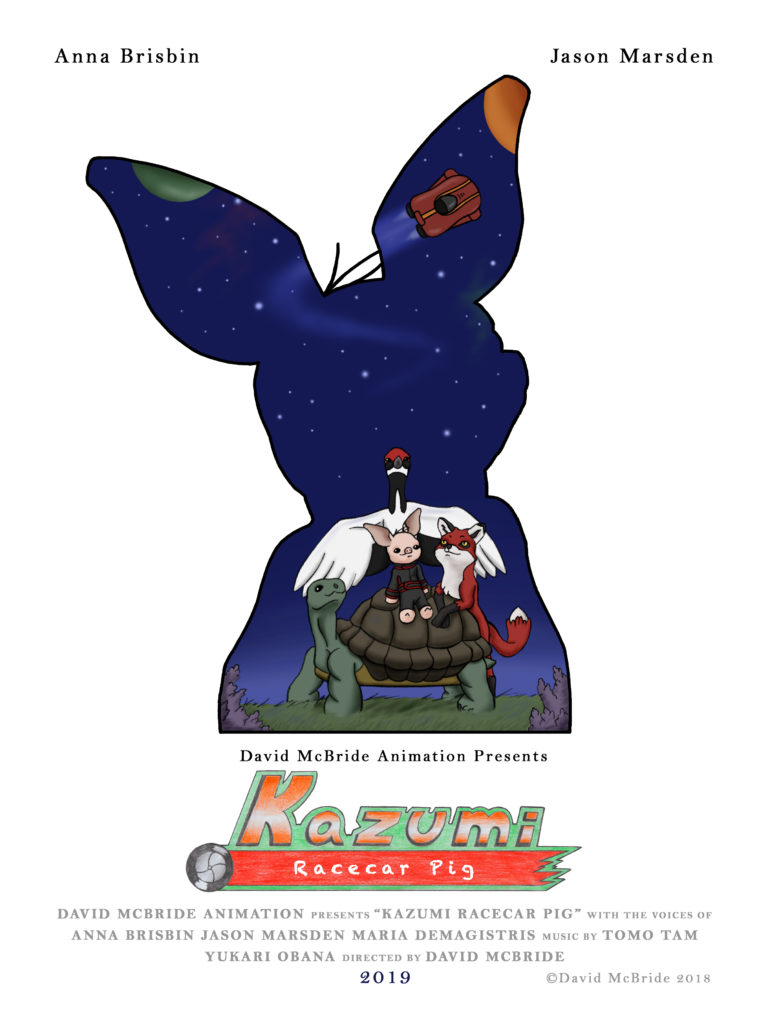 Despite the fantastical tone and far-out setting, McBride’s inspiration sprang from a very real place.

“It happened before this theme kind of exploded in our society,” McBride said, referring to the themes of tolerance. On two separate occasions, he happened to hear two different young children—one that he worked with for a voice-over project and another he saw on the news—give disparaging, xenophobic remarks about an-other culture. Prejudice came from both sides; one child was American, and the other from a foreign country. “Both of these things struck me as kind of odd because I don’t think that hatred is natural,” McBride reflected. It puzzled the anima-tor, who said he grew up in an open-minded environment.

Inspired to instill acceptance in the next generation, McBride wove this message into his craft. He grounded the story in Kazumi, his main character. The pig actually first appeared as a background character in his first book, “Dimitri Has His Head In The Clouds.” A Japanese news reporter McBride caught on television one day offered the name, which reminded McBride of the “zoom” of the pig’s racecar. “I wrote the whole story in a day,” he said. After the book came out, he toured it around to different schools in the Philadelphia area, giving readings. In the spring of 2017, he started production on the film.

The style harkens back to cartoons from McBride’s childhood, which feature a style with “very dark, clean lines” similar to the programs “Chip ‘n Dale: Rescue Rangers” and “Duck Tales.” It’s hand-drawn, done with pencil on paper before he scans the images into a computer. “I wanted to still have my pencil lines to have a little bit of that roughness that kind of looked like the style of cartoons that I grew up with,” McBride said.

Even though his central character zips around at super speeds, McBride took things slow. He described a patient process of honing a scene here, an image there. “This film, I put everything I’ve gathered thus far, all my knowledge,” he said. His time in ANM, where he was an online student, directly informed this film. He recalled receiving feedback and mentoring from the late animator Rusty Mills, of “Animaniacs” fame.

Online Director of 2-D Animation David Nethery consulted McBride on the film. McBride said he asked Nethery how to preserve dark pencil lines that weren’t too clean in his animation program.

Both Nethery and Mills are credited in the film.

In spreading the word about “Kazumi Racecar Pig,” McBride said, “The kids [I met] seem to be very accepting of one another. I always leave feeling more inspired.”

His advice to Academy students? Embrace patience and perseverance. “This career takes time,” McBride said. “You have to be patient with yourself and patient with the world.”

One hundred percent of the ticket sales will be donated to The Ronald McDonald House Charities of Philadelphia and PADD (People Against Distracted Driving). For more information on the screening, please visit https://www.kimmelcenter.org.