Traveling in a New Direction

Nursing a broken heart after a big breakup, Jade Wu threw herself into travel. Starting in February 2018, she ventured solo to Alaska, New York, Portland, Hawaii, Rome, Zurich, Florence, Barcelona, Madrid, and Paris. Along the way, she painted—in parks, piazzas, or while waiting for food at cafes. 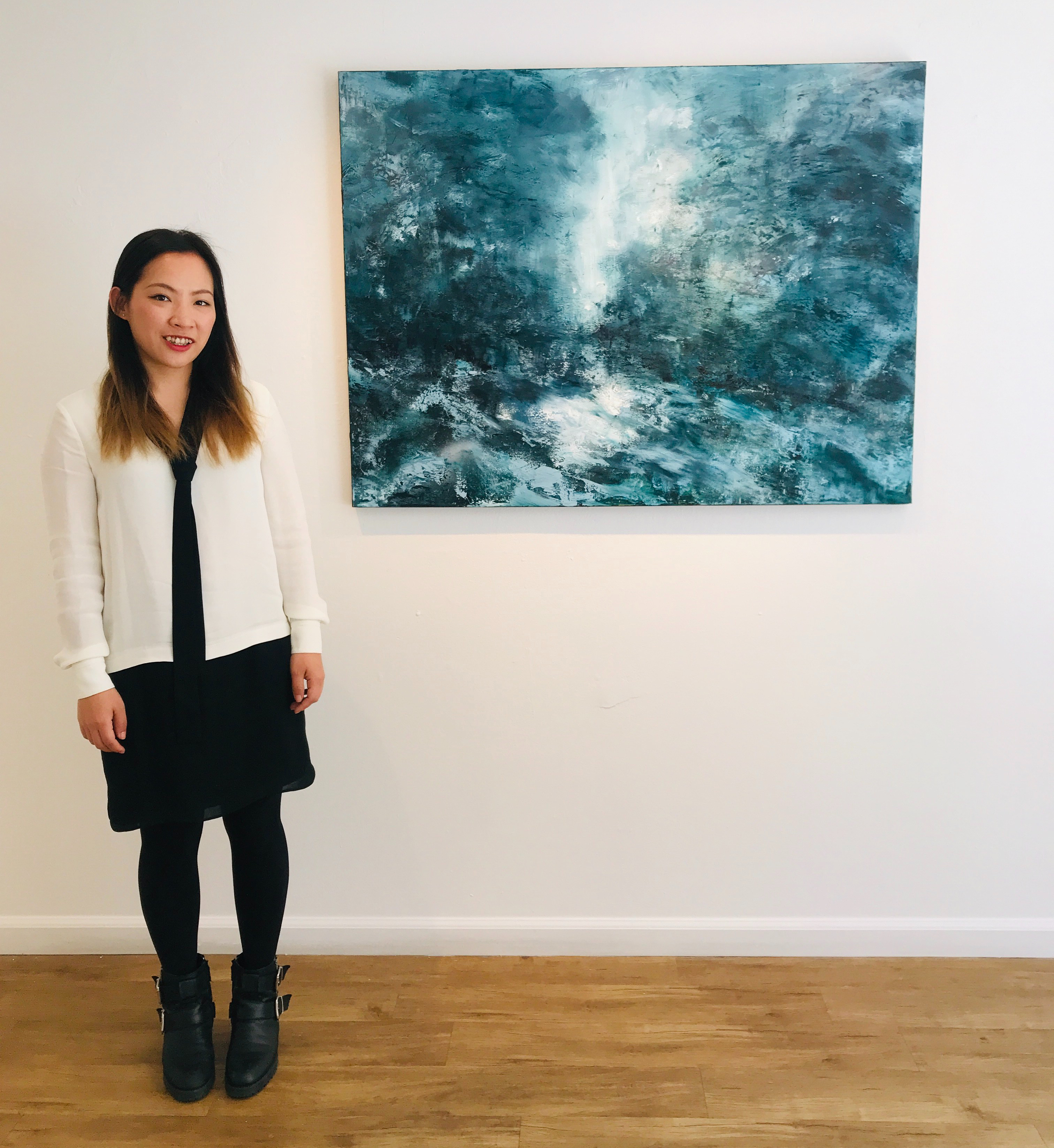 “I just traveled and did drawing and painting to try and get my mind off of it,” said Wu, who’s currently working towards her M.F.A. at Academy of Art University’s School of Fine Art (FA). She branched out, exploring different techniques and mediums, rooting out what she liked. Yet, she didn’t realize then how much the experience would transform her painting.

After arriving in Florence in June to attend the Academy’s study abroad program, she switched gears in her art. “I changed it to a totally different direction,” she said. Before, her focus was realistic figurative painting; her thesis was to be a casino scene depicting poker players.

Now, she focuses on landscape paintings in an abstract interpretation that bridges representational with “imaginary situations.” The fruits of that labor—and subsequent shift—comprised Wu’s first solo exhibition, “passage through the hollow,” at the 688 Sutter Gallery all April.

The exhibition displayed a diverse cross-section of Wu’s work while on and since her travels. The 25 works spanned pen drawings, small watercolors, and large oils. More abstract pieces occupy a front room. While Wu continued to paint after returning to the Bay Area, (several works inspired by contemplative walks around the East Bay, where she lives) chronicles of her travels were a central presence. This included a verdant, bucolic watercolor work capturing the Swiss Alps, a detailed pen-on-paper sketch of Venice’s canals and a watercolor of a rainy day on Florence’s Ponte Vecchio—wherein Wu mixed falling rainwater into her paint.

“I think the amazing thing is that when you put it down to a painting, the memories are long there, forever,” Wu said of painting her travels. “Especially doing it on location, it’s the most straightforward feelings and sensations I have towards this place—what I’ve seen and how I feel.”

Since studying abroad, she started practicing the technique of oil painting and making it more abstract. Upon returning to the States, she flexed these muscles in bigger works. 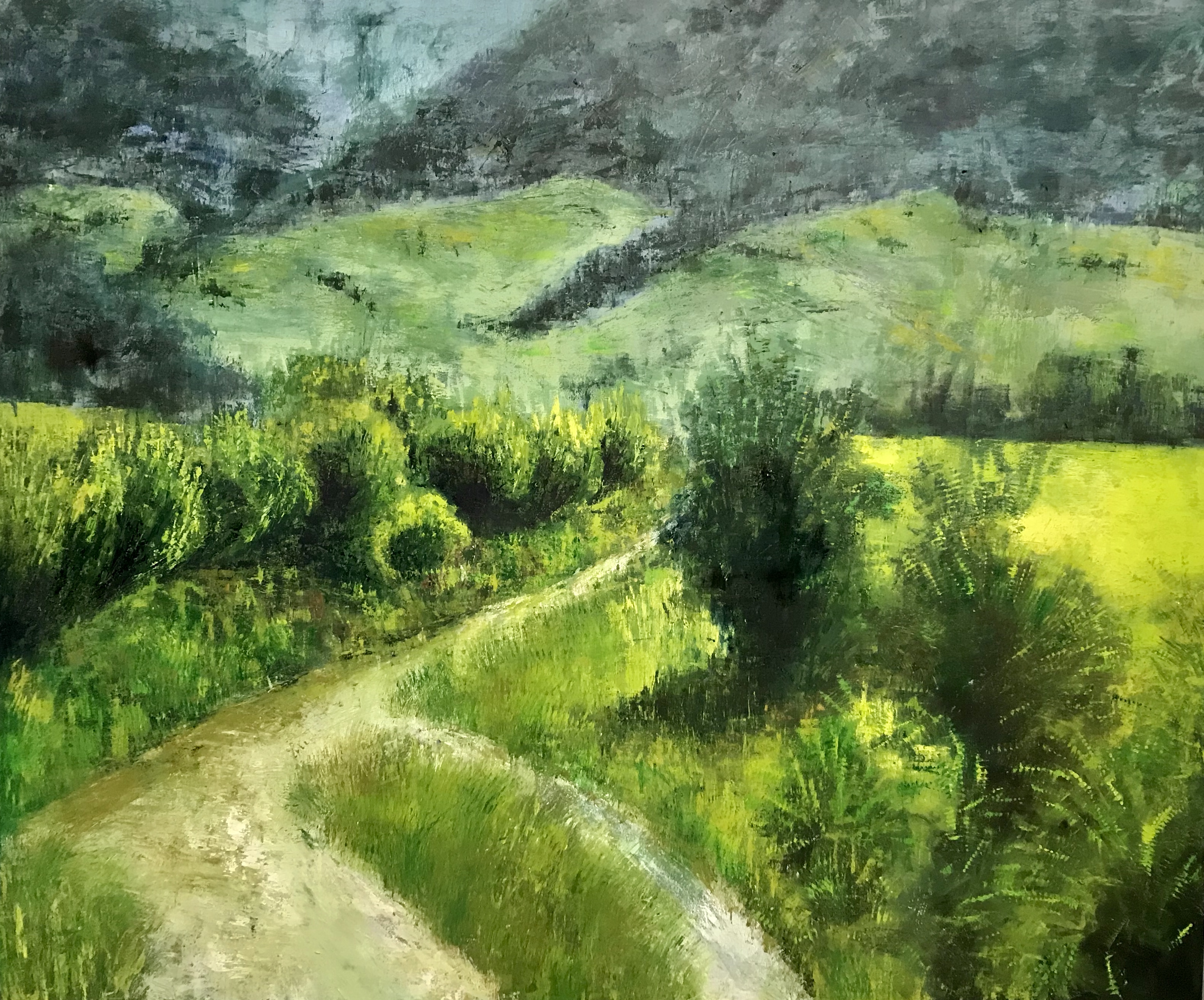 Gallery Manager Kevin Goring said the space is an apt layout for Wu’s multiple styles. “I think people are drawn to these pieces because of the vibrant colors and the masked forms/feelings presented allowing someone to come in and project their own thoughts onto each piece,” he wrote via email. Goring first became familiar with Wu’s work in a group exhibition at the Atelier Gallery at 79 New Montgomery.

“When her work arrived for display, I was taken aback.”

Goring also said that the exhibition displayed the progression of Wu’s skills. “Her style is leaning heavier and heavier into a complete abstraction of its subject and leans more into the feelings and colors she wants to evoke,” he added. “I think [it] will aid her in her market once she settles into it a bit more.”

Despite the breadth of styles, grounding everything is a strong sense of Wu’s emotional state while she created.

“I put my emotions into the scenery to express my feelings,” she said. “I’d been traveling alone, so there were a lot of emotions in my head.”

One work, depicting Tilden Regional Park in the East Bay, exemplifies her meld of representational landscape and abstract imaginary space. She gestured at the scene of a placid lake fringed by a crush of trees and foliage. “This painting, when I did it I thought about how women are like water—so smooth—and the men, like the trees, are chaos,” she said. “Other than the scene I think about relationship things. Humanity things.”

She said she appreciates how her Academy instructors keep her inspired. It’s something she eats up, especially considering how before enrolling in the M.F.A. program, she didn’t have any formal painting training. She earned her B.F.A. in textile design from the Academy in 2015. It was her mother who convinced her to take the risk and plunge into painting.

Wu has no regrets: “Once you like something, you put your heart into it.”