Like many, Vivi Lin found her answer in church.

On the hunt for ideal photography subjects, she’d headed to Old St. Mary’s Cathedral to find older couples, hoping to create a story about long-term love. But, it was challenging. When she approached some senior couples, she met bewilderment and resistance. “Why do you want to take pictures of old people?” they’d ask her.

It was an unconventional choice for Lin. As a student at the Academy of Art University’s School of Photography (PH), she’s focused on wedding photography and had up until that point only shot younger subjects. However, she now wanted to tell a different story. “I am a person who is very sentimental,” Lin said. “I yearn for love. Every time I take photos of different couples, I like their stories, their emotions.”

She encountered one Chinese couple, named Mr. and Mrs. Wang, who agreed to be subjects. She visited with them often to gain their trust and soon learned they had a more fascinating backstory than Lin initially realized. They were former dentists who immigrated to America around 30 years ago.

A quick glance at the couple’s original wedding photo reveals why Lin was so passionate to photograph them. Taken decades ago during the Cultural Revolution, when some Communist Party leaders associated wedding photos with lavish capitalism and banned the practice, the evidence of the Wangs’ wedding day looks far from a stylized photo shoot: the heads of bride and groom, photographed separately, are cut out and pasted on another surface. “This picture was when they were 20 years old, their only marriage photo,” Lin said, displaying the image on her phone. After hearing about their decades-long relationship, she wanted to capture their beauty in a more fitting way. “After 60 years, I decided to take wedding photos of them.” 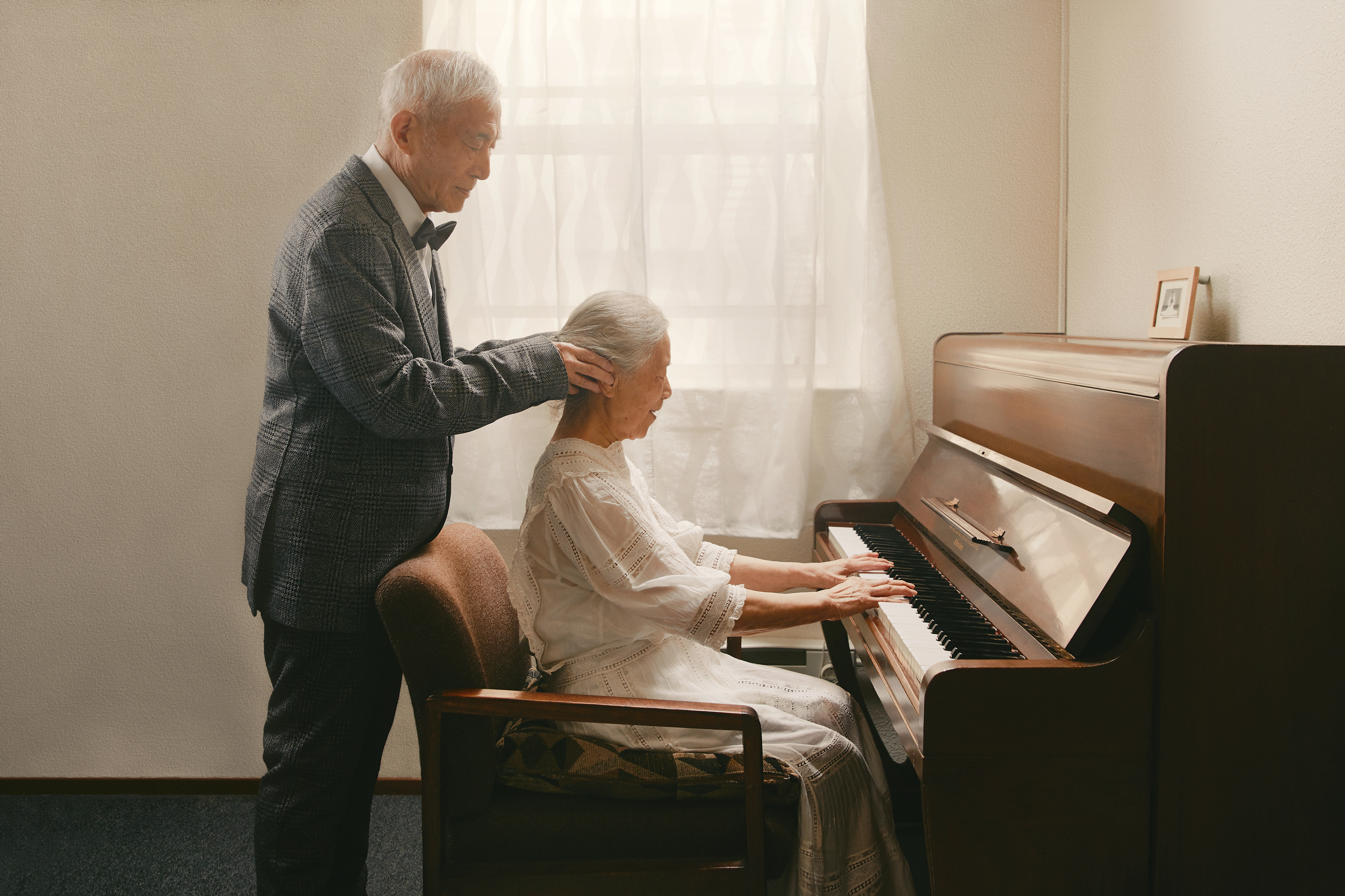 “Decades of Love” by Vivi Lin won a Silver Award from the Wedding and Portrait Photographers International annual competition.

She set to work. Opting to photograph the couple in their home, she spent two hours on the day of the shoot cleaning and rearranging a room, setting her scene. She erected a curtain and dressed the couple in wedding attire. Knowing the wife is a pianist, she beckoned her to play. The time Lin invested in making her subjects comfortable paid off. When the husband started acting playfully—covering his bride’s ears—Lin knew that was the moment. “Finally, I got the picture,” she said.

The resulting photo won a Silver Award in recognition of photographic excellence from the Wedding and Portrait Photographers International (WPPI) annual 16×20 print, album and filmmaking competition. Lin won a Silver Award for another photo this year, in the “Bride alone, non-wedding day” category. That photograph, shot in the early evening at San Francisco’s City Hall, also showcases Lin’s innovative spirit. Wanting to create an illusion without photo editing, she manipulated her model’s hairstyle and strategically set up a light to cast a curious shadow. The model’s hairstyle suddenly resembled a turned profile, as if the bride’s shadow is looking back at herself. Lin’s assistant strategically tossed the model’s veil to create an ethereal floating appearance. “A lot of people take photos in City Hall. But, creating a story makes this photo different from other pictures,” Lin said.

Lin’s knack for photography emerged almost on accident; while studying teaching in South Korea from 2013 to 2016, she fell in love with the landscape and started photographing it. One exhibition displayed four of her photos. “I felt like, ‘Oh! Maybe I can try!’” she remembers thinking. “I realized that I loved taking photos … I changed my mind [about teaching].” 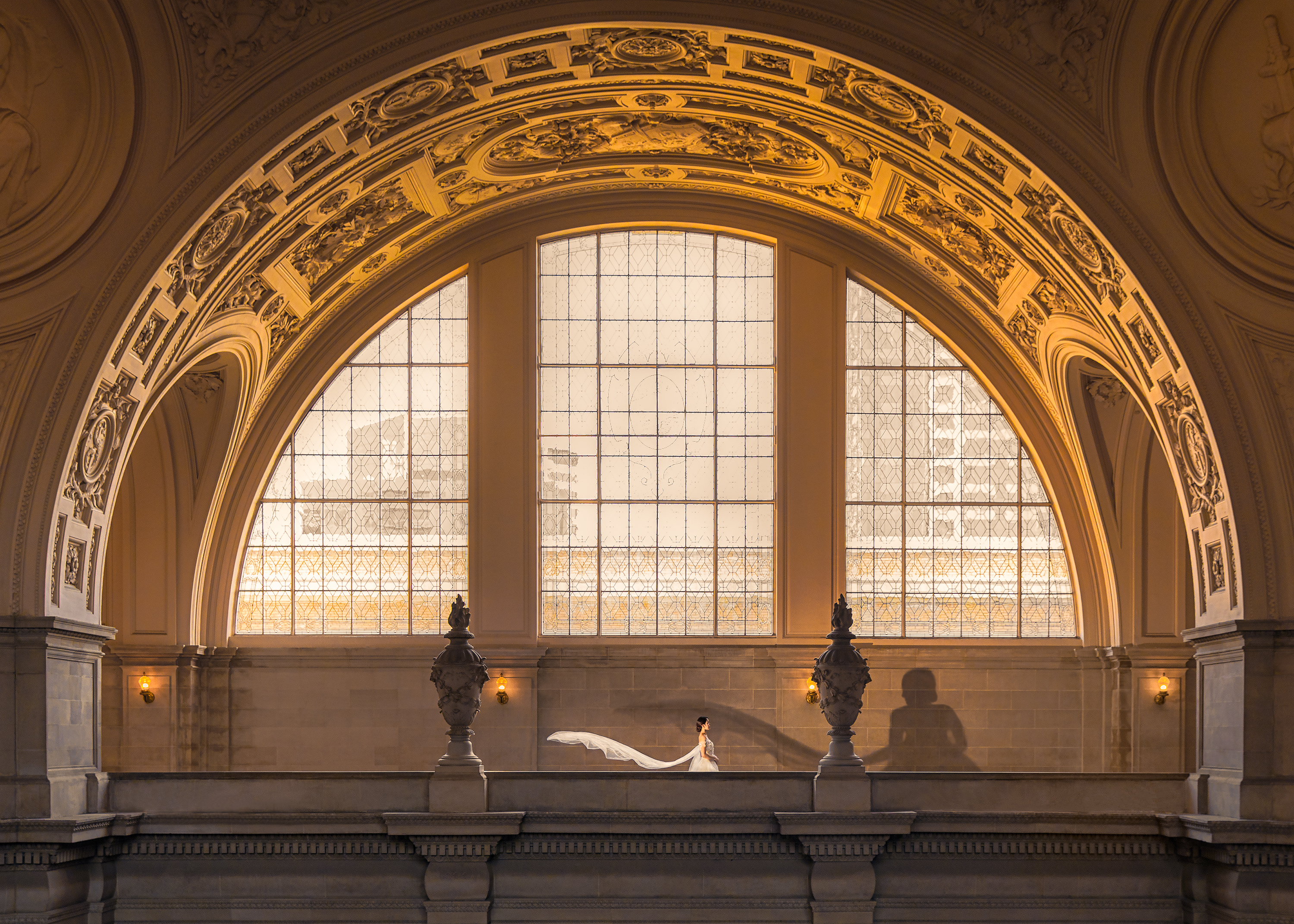 “Meeting the best you” by Vivi Lin won a Silver Award from the Wedding and Portrait Photographers International annual competition.

Upon enrolling at the Academy in 2017, her passion for wedding photography took hold. She sees the art form as a way to combine her interests in photographing both landscapes and people. Scrolling through her portfolio, she notes how her photographs aim to solidify a relationship between setting and subject. She often plays with shadow and light to tell a story and shoots on a Canon EOS 5D Mark IV. “The location has some specific meaning for the couple,” she said, adding she strives to “make use of the features of the surroundings to create some story.”

Instructor John Vano, who teaches Lin in his Location Lighting class, said she has both vision and a dogged determination. “She’s always looking for this impactful concept,” he said. “Strong mood, strong narrative, visually pleasing—and will do anything to make that happen.” Vano added that Lin may resonate as an introverted observer—who’s always exploring new techniques to elevate her photography—but her work speaks volumes. “She’s bold with her photography … She’s very, very set in getting what she wants. She’s not going to settle. It’s almost like it’s never good enough, which I think is a good thing.”

These two WPPI Silver Awards are the latest in a string of accolades. She’s won a total of 10 awards, from past competitions with the International Photographic Competition and the Asia Wedding Photographers Association, and past WPPI years.

She said 80 percent of her work is wedding and engagement photography. Her plans for after she graduates in 2020 are to start a wedding photography business.

To view more of Lin’s work, visit her website at www.vivilinphotography.com.