There were three days to go until opening night for Academy of Art’s School of Acting (ACT) spring production of Caryl Churchill’s “Fen,” directed by Clark Houston Lewis, and there was still a lot that needed to be sorted out at a recent tech rehearsal. Actors ran through their scenes. Then, over the audio track of a forlorn cawing of crows came the screech of a power drill as stagehands worked on securing parts of the set and called to one another (“Hey, did you put the glides on?”). Lights were re-positioned. Rock formations that were a part of the set were moved a foot upstage. And as an operatic aria-like music cue was tested, Hector Zavala, the show’s technical director, set up a hydraulic lift and rose to the rafters to adjust a projector that provided supertitles for each scene and backdrop images of desolate fields of a farming community in the Fens, England, where the play is set.

At one point during the rehearsal, after a chaotic transition from one scene to the next, Lewis announced with lighthearted persistence, “The actors are figuring out what they’re doing. So let’s do that again.” When an actor forgot a line, he waved it off with a tongue-in-cheek, “Don’t worry, you’ve got three days.” Many times throughout the hours-long rehearsal, Lewis announced with unwavering resolve, “We’re going to go back and do that one more time—at least.”

The final rehearsals paid off as opening night went off without a hitch and turned out to be a hit with the audience, which gave the cast and crew a standing ovation at the end of the night. Lewis beamed with an understated, “I thought it went well.” He said that he was surprised by the depth of the performances compared to what he’d seen at rehearsals. He added that there are two kinds of actors: those who give a consistent performance from rehearsal to the actual live performance. And then there are the actors who, when they have an audience, turn it up a notch by—according to Lewis’s own estimate—15 percent. “That part is really exciting to watch,” he said. 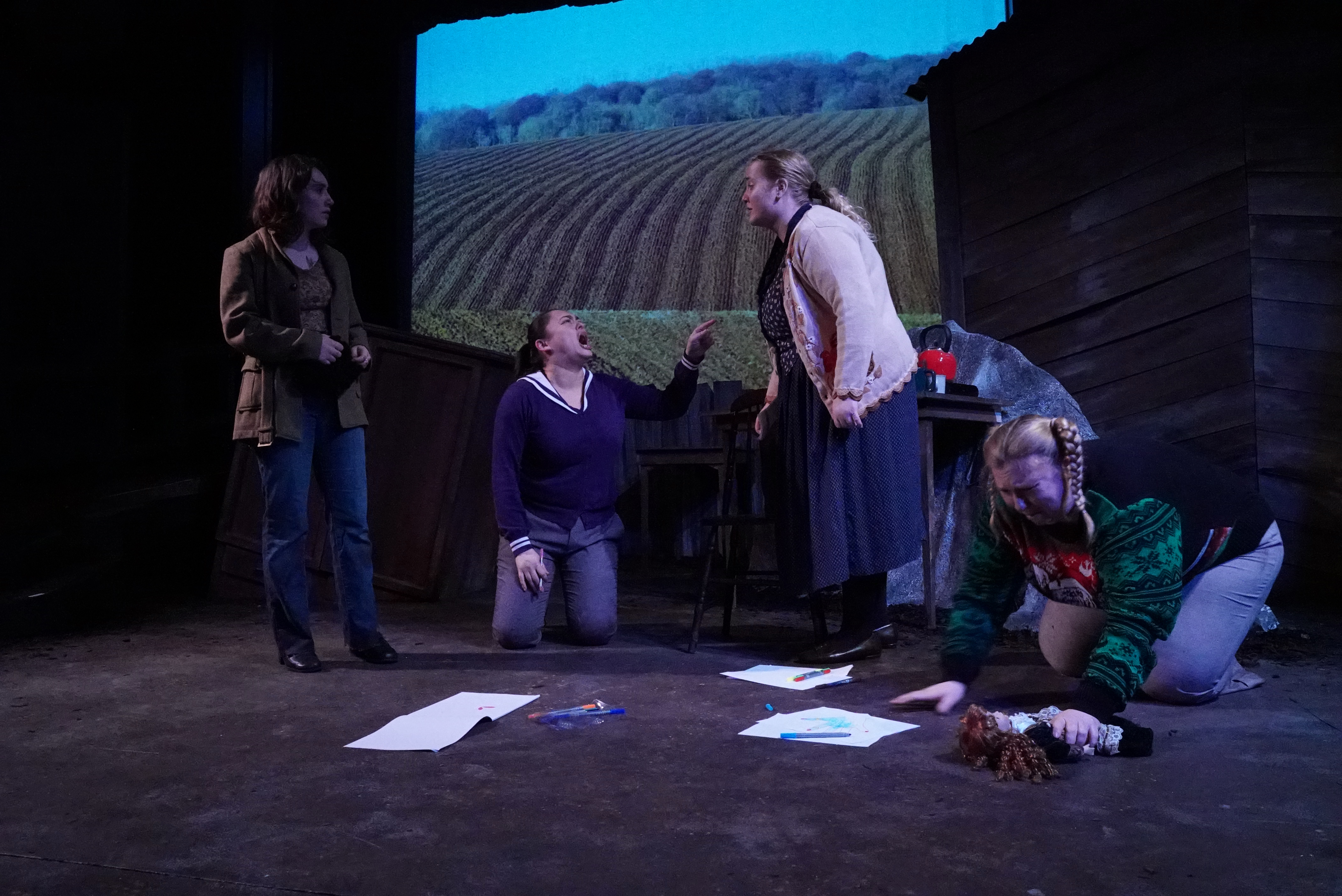 Lewis pointed out that many of the students have worked together previously. “They’ve learned to trust each other in class and in other past productions,” he said. “They learn the idiosyncrasies of the other actors. They understand each other. And so they work well as an ensemble. And there’s a kind of calm they bring to the work when they know they can trust each other.” Lewis said you only see that kind of energy in big repertoire theaters. And it’s that undercurrent of connection that Lewis said pulled the production together. “The show is so fragmented you need some kind of cohesion.”

The play, which ran from March 15 to March 22 at Sutter Street Theater at 620 Sutter Street, is a dazzling kaleidoscope of otherwise dreary, fractured lives of a farming community that labors in rock-strewn potato fields. But then the whole production has been a whirlwind of hard—though gratifying—work.

“The cast list went up on a Tuesday morning. Rehearsals started that evening,” recalled Zaya Kolia, an ACT senior who graduates later this spring. In “Fen,” Kolia plays three different characters that include a farm owner and two separate farmworkers, one who’s 16 years old and another who’s 65. Kolia admitted that he’s not used to this kind of material. “It’s dark and these three people [that I play] are so far away from who I am. They have endured more than I have.”

Garrick Sigl, another ACT senior who was last seen in “The Marriage of Bette and Boo,” and one of the few actors in “Fen” who doesn’t play multiple roles, agreed. “All the characters are fighting for their chance at happiness.” Rehearsals began a short three weeks ago and to that he said, “If it’s one thing school has taught us is to fake it till you make it.” 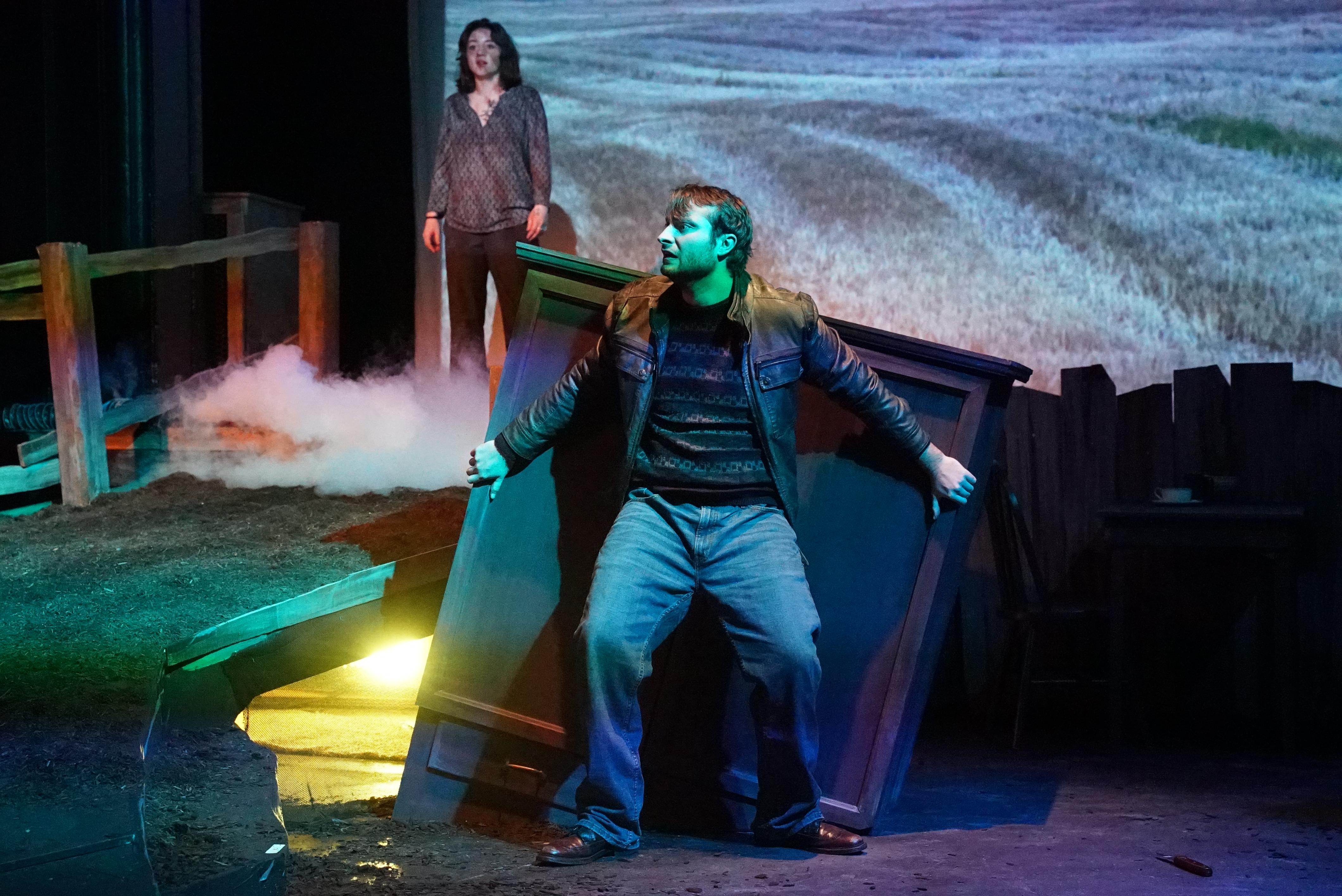 The other thing they had to “fake”? The British accent that is specific to the East Anglia region where the play is set.

Sigrid Yang, a second-year B.F.A. student who most recently appeared as the translator in the ACT production of “Chinglish,” mentioned that it was challenging to learn the accent for her characters—she plays four. A native of Taiwan, Yang admitted that her own Taiwanese accent made it feel as if “the two accents were fighting each other.” But thanks to the coaching she received from ACT’s voice and speech instructor Deb Eubanks, who once lived in East Anglia, Yang learned how to faithfully recreate the dialect. Or at least a variation of it. “We can’t go full on into the accent,” she explained, “Otherwise people in the audience wouldn’t be able to understand us.”

For Renee Rogoff, her challenge as an actor came in the emotional wallop of the material. “The four women I play are so different,” she said. Angela was the most difficult. “Living in her skin was so hard,” she said, adding that as she worked on creating the character of an abusive stepmom, Rogoff kept checking in with herself, asking, “How deep can I go without hurting myself emotionally.” She explained, “You allow yourself to open that door, but at some point, you have to close that door again and put it to bed.” In the end, Rogoff said work like this, “Gives me the ability to go there and come back.”

ACT Director Damon Sperber attended the opening night performance of “Fen” and commented, “It’s a provocative play. I enjoyed watching the challenge of a piece like this and the way young actors rise to meet that challenge and explore humanity.”

Sperber said the success of “Fen” was a testament to Lewis’s ability to work with young actors and bring those performances out of them. “It’s not just directorial skill,” Sperber said, “it’s human skills and we’re lucky to have him.” Kolia agreed and mentioned that having the generous support of a director helped the show. “Clark believes in everybody.”