B.Arch graduate and Gensler designer Samantha Buckley is a key contributor in her latest project—from pre-design to construction

As a key member of Gensler’s design team for Burlingame Point, Academy of Art University School of Architecture (ARH) alumna Samantha Buckley is an indispensable contributor to the landmark project—hitting a homerun right out of school. Buckley, who graduated from the B.Arch program in 2015, landed a project where her skills were put into play immediately, which she shared was like a dream come true. “Three years ago, I was just drawing lines,” she said. Now, she visits a 300-person construction site regularly to see those lines become a built reality. 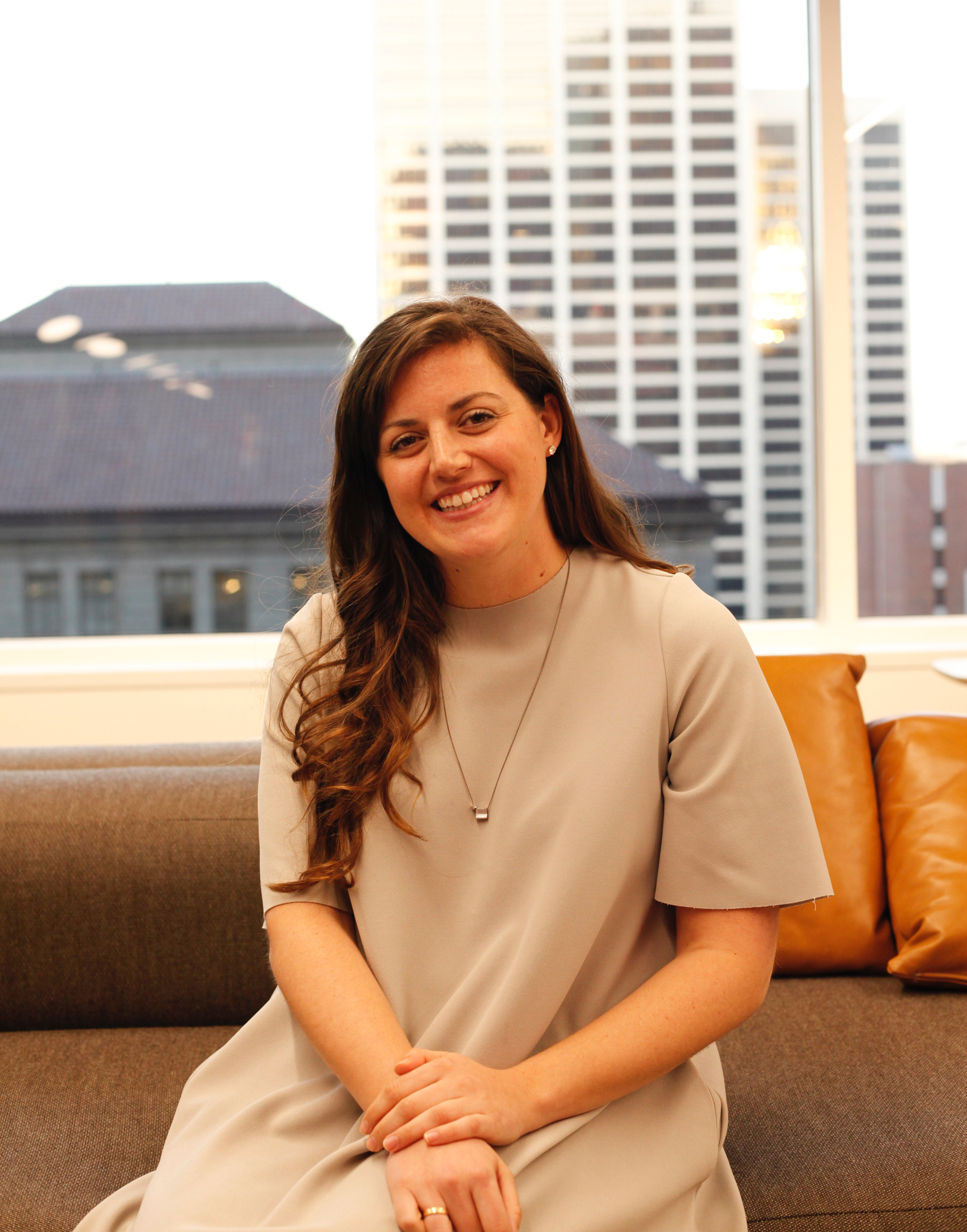 Burlingame Point is a new, ground-up corporate campus on an 18-acre waterfront site south of SFO that includes four office buildings, an amenities building, and a stand-alone parking structure. Once completed, the campus will house Facebook’s Oculus VR team. (The project also includes the restoration of a nearby stretch of the San Francisco Bay Trail.) Buckley finds her work on the project to be “always different” and revealed that it only gets more exciting as it heads toward completion this year. As part of an architecture studio that focuses on office buildings and build-to-suit projects, her co-workers and project team work together to deliver large, multi-year projects, like Burlingame Point, and are making an indelible impact on the Bay Area.

Buckley has been at Gensler, the global design firm founded in San Francisco by renowned architect Arthur Gensler, since graduation. It was one of four firms she toured as an Academy student, and an instructor encouraged her to submit a job application. After learning more about the company and its culture during a few rounds of interviews, she knew it would be a great fit for her. When Academy Art U News spoke with Buckley at Gensler, the offices were festooned with bright décor from a recent holiday party that had a “Coco” animated movie theme. Papel picado hung from the ceiling. Marigold tissue paper flowers covered the walls. And, out by the elevator bank, lurked a breathtaking papier-mâché recreation of Pepita, the colorful, winged jaguar alebrije from the movie, which Buckley helped co-workers build, though she said quickly that she didn’t know the first thing about papier-mâché.

But for someone who confessed that she grew up with her own tool belt as a kid, it was easy to see how Buckley comes ready to tackle whatever she sets her mind to. She recounted that while her mom was an art history buff, her dad was a businessman who transformed into a weekend warrior on home construction projects, like redoing all of the plumbing in the house. “He only worked on it [during] weekends,” Buckley pointed out, “so home was like growing up on a never-ending construction site.” 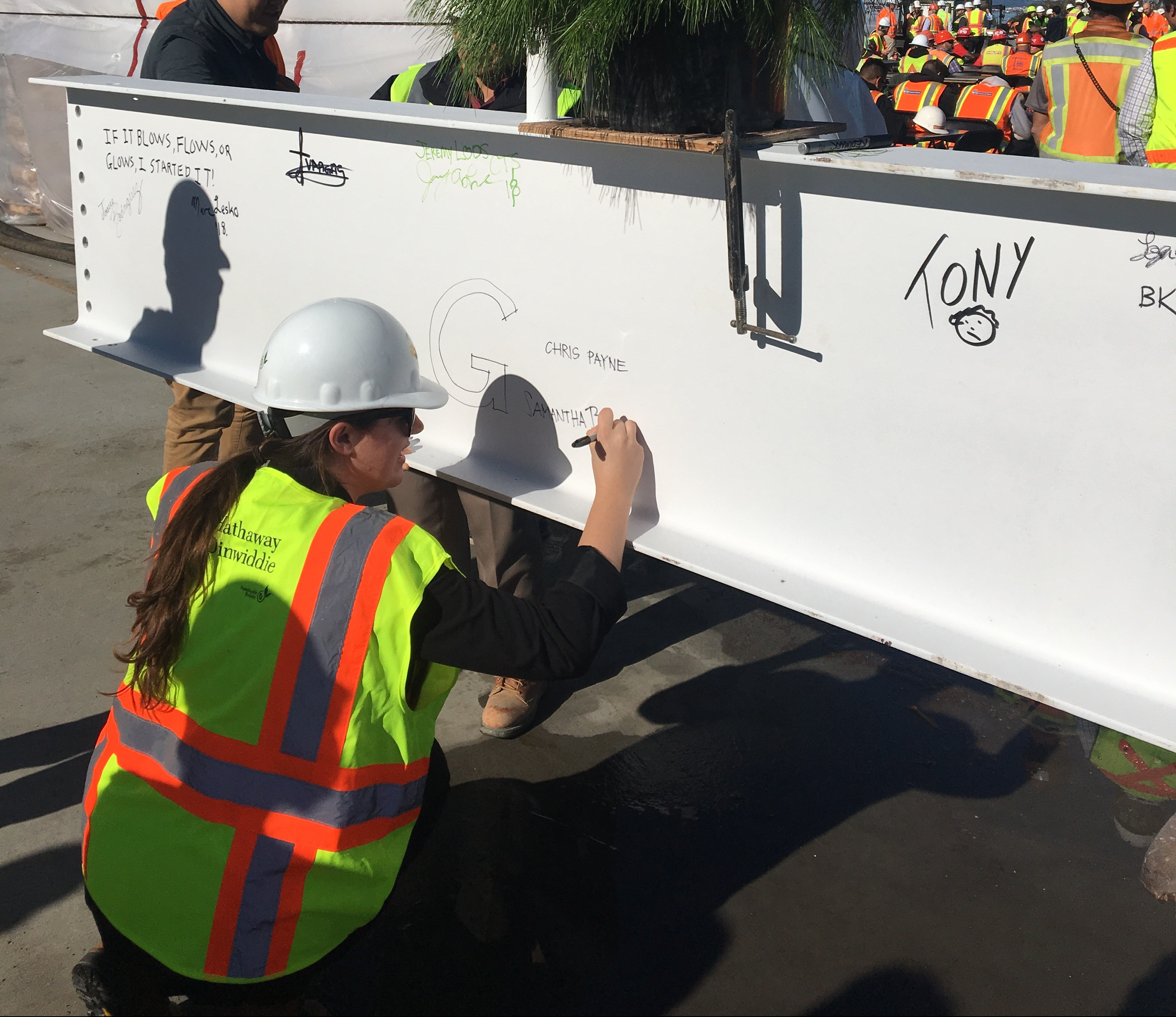 Samantha Buckley signs the construction beam for the topping out of Building 2 of the Burlingame Point project. Photo courtesy of Gensler.

A transfer student from Northern Arizona University, where she’d been studying interior design, Buckley started ARH’s undergraduate program in 2010. Despite the hard work the program required, she was excited by the power of design and its potential to change the world, not just on a grand scale, but in the intimate role it would have in impacting an individual memory. And that kept her motivated to graduate.

A big lesson learned during her time at the Academy was the importance of managing that inevitable moment in the studio, when, a week before the end of the class, an instructor would toss in a wrench about taking a proposed design in a different direction. She would have to scramble to redesign and finish the project on deadline. She recalled thinking, “How am I going to pull this off?” Experiencing that moment in her academic career prepared her for the working world, where, she said, “It happens way more often than not.” There’s a proposed change or a shift from a client, and though there are concerns about time and, of course, panic (“But we’re presenting tomorrow at lunch!”), she’s grateful that she learned how to navigate those situations while still in school.

Buckley is on the path to becoming a licensed architect, and she recommends that students (as soon as possible after graduation) start the licensure process, which, in her time, included seven national exams and one state exam. She enrolled in the American Institute of Architects San Francisco (AIASF) ARE Pact Program, which included a peer study group, a series of lectures, and personal accountability. Plus, if you take all the necessary exams within a year, you receive a full refund of the program enrollment fee. “It was a lot easier to study when I was finished with school and had the time,” she said. “You only get busier and more invested in your career once you start working.”

Snapshots of the Future

Engaging the Business Side of Fashion

An Immersion in Nature