Academy of Art University has been on the virtual reality front lines since 2016 when the Schools of Communications & Media Technologies and Motion Pictures & Television hosted its first-ever VR Summit. The technology was just making its rounds in the entertainment industry then and in the years between, other majors have latched on to VR’s content capabilities, such as School of Game Development experiential projects “Junho” and the Norman Rockwell VR Experience.

The initial phases of VR pegged it as a consumer entertainment product, almost to a point where it is being overshadowed by its augmented reality counterpart. But Antonio Borja, director of the School of Industrial Design (IND), caught on to the ways artists and creative professionals use VR sketching as a pivotal tool to design cars, furniture, and other products. Just this past May, VR sketching software by London-based design studio Seymourpowell debuted at the London Motor Show, as reported by CNN.

“I know at first this thing seems like a gimmick but it’s not. Because it allows you [to] think and experience your design in 3-D, true 3-D,” Borja said in a September 2018 workshop. “It’s not like sketching on paper where you see a two-dimensional representation of your 3-D object. Here, you actually get to walk around it.” 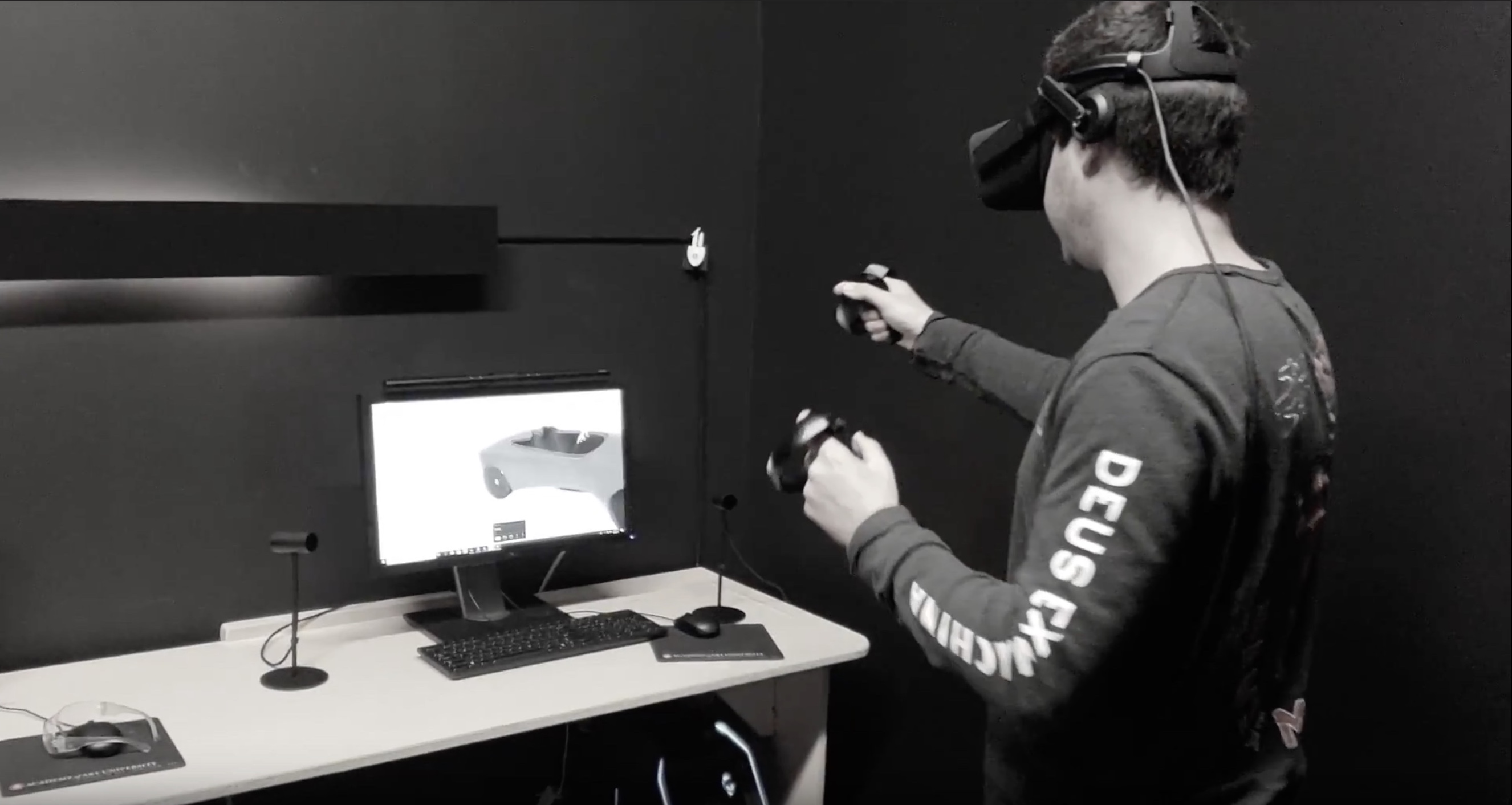 Borja took students through a crash course in VR sketching software Gravity Sketch, paired with an Oculus headset and controls. He covered the basic tools and triggers: various stroke types (round, square, diamond); how to create surfaces, texture, shape, and depth; change line color and scale the design. One really cool feature is the software’s ability to mirror any lines drawn or edited to ensure symmetry and accuracy.

Referencing a quick 2-D sketch, Borja demonstrated the Gravity Sketch tools in real time. The advantages of working this way were soon very clear. Traditionally, car concepts are molded in clay so designers can see a physical draft and analyze the car from various angles and perspectives. In VR, that same effect can be achieved in a fraction of the time and spatial evaluations that could help them identify design problems much earlier than before.

“It’s a very valuable tool that will allow you to experience your designs in a way you haven’t been able to do until you design a prototype,” Borja explained, who dives deeper into the nuances of VR sketching in his Digital Imaging 2 (IND 363) class. “It’s better to find these issues early on in the workflow and make it so that we have time to make these adjustments so that our final project is that much better.”

Max Benon was one of the first IND students to test out VR sketching in the department. He uploaded his design for an Alfa Romeo convertible into Gravity Sketch where he etched a hardtop onto the car. Thanks to video games, Benon said he picked up the controls rather quickly, but like most folks new to VR, the orientation shift left him a little dizzy. Borja and Benon both emphasize that VR sketching is for rough drafts, it isn’t for finalizing a design; it’s more so to figure out if the general form works in the first place, then all the refining details can come later.

“You’re more concerned with finding essence and volume and theme of design rather than worrying about technique or line weight or clean drawing,” Benon said. “You use it as a quick step, kind of fast forward your design process. … You kind of combine the ideation and development all within one sketch.”

VR sketching for cars specifically is very much in its infant stages, but the possibilities appear to be endless. When in VR, the designer can expand to life-size scale and assess the driver visibility or collaborations with engineers regarding specifications can be brought into the design process earlier than later. As digital technology continues to advance, IND, just like the Academy as a whole, wants its students to advance right alongside it.

“I don’t want students to be shell-shocked when [VR sketching] becomes bigger,” Borja said. “I want them to already be creating for it.”

Art U News Predicts The Grammys