Over the course of multiple semesters, the School of Game Development (GAM) at Academy of Art University collaborated in part with the Norman Rockwell Museum for its newest touring exhibit, “Enduring Ideals: Rockwell, Roosevelt and the Four Freedoms.”

When Rockwell’s iconic American imagery was published in the Saturday Evening Post in 1943, it “shifted American attitudes towards engagement in the War in defense of the free world, and, ultimately, helped to make the case for universal human rights,” noted Rockwell Museum Director Laurie Norton Moffatt.

In addition to a VR setup, the exhibit is organized into five thematic sections: The War Generation, FDR’s Four Freedoms, The Artistic Response, Freedom’s Legacy, and Reimaging the Four Freedoms.

“In doing this, the exhibition reveals the enduring power of illustration to communicate ideas and inspire change,” Moffatt elaborated. “Moreover, in highlighting Rockwell’s and his generation’s response to the call for unity in support of these fundamental freedoms, the exhibition resonates powerfully with our own time.”

Started in May 2017 and wrapping this past spring semester, over 25 students from GAM and the Schools of Animation & Visual Effects (ANM), Illustration (ILL), Music Production & Sound Design for Visual Media (MUS) and Web Design & New Media (WNM) worked in tandem to create an Oculus virtual reality experience to supplement the “Enduring Ideals” comprehensive exhibition, which opened at the New York Historical Society this past May. The exhibit will then travel around the United States before landing in Normandy on June 6, 2019, the 75th anniversary of D-Day. 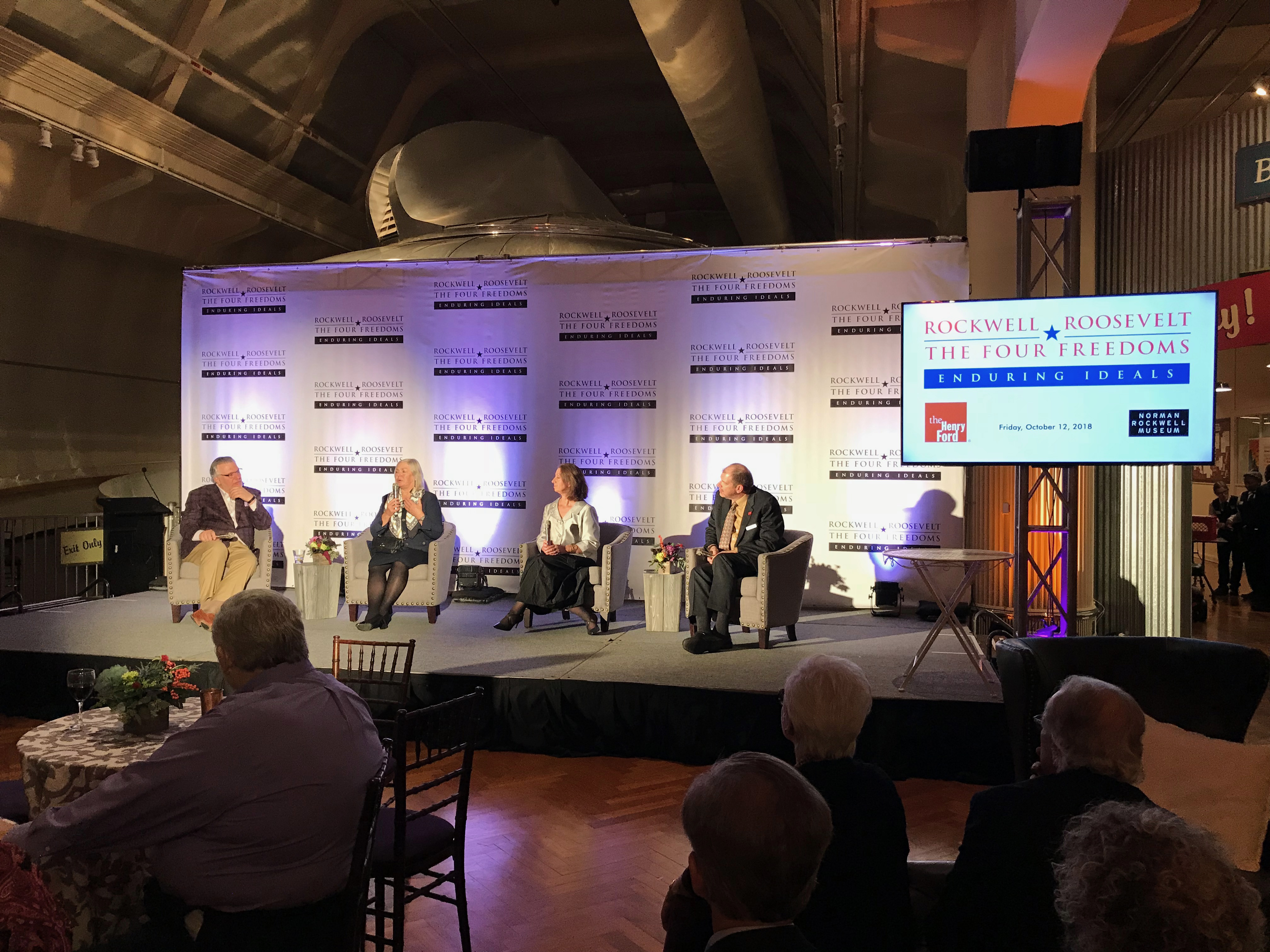 On Oct. 12, panelists discussed the importance of Norman Rockwell’s work at the opening of the Norman Rockwell “Enduring Ideals” exhibit at the Henry Ford Museum in Dearborn, Michigan. Photo courtesy of Rich Bradwell.

In 1943, Rockwell created his Four Freedom paintings in response to President Franklin D. Roosevelt’s call to action against the threat of Nazi Germany and in support of American war efforts. Roosevelt painted this as protecting the Four Freedoms: freedom of speech, of worship, from want, and from fear.

Naturally, for millennial students, there was a generational gap to address.

The museum’s Director of Digital Learning and Engagement, Rich Bradway, provided assets to incorporate content from that era (radio broadcasts, video footage, and interviews) to show what it was like watching the war unfold in real time.

“What I’ve been trying to do is leverage technology in new ways [that are] native to the younger digital users,” Bradway explained. “I wanted to find a way for them to interact with this content material in an environment that they’re familiar with.”

“It was super cool to have the opportunity to look at his work again in its historical significance and say, ‘Okay, this is an important part of our culture, how can we make it engaging for today’s people,’ and show it’s still relevant,” she explained. “We’ve all seen these paintings in one way or another, how can we give them a fresh look at it?”

Refreshing Rockwell for the digital age wasn’t as simple as translating 2-D images into 3-D. According to GAM’s Technical Lead and Rockwell project lead, Phil Kauffold, the Norman Rockwell VR Experience is designed so viewers walk through a kitchen, living room, bedroom and more, each filled with period accurate artifacts such as newspapers, furniture, and children’s toys.

But there are tons of factors to consider for a tech-driven experience for such an exhibit: do they want users to sit or stand? Does the room respond to movements or interactions? How does the broad audience age range (five years old to 70 years old) affect how the students build the game?

“We have to design for the young kid who knows the language of video games and understands this stuff,” said Kauffold. “But we also have to design for somebody [who] is older [and] doesn’t have that intuitive understanding of what we think of as the normal visual language.”

The full build, including playtesting, occurred in trial-and-error stages across four semesters. Between coding limitations and onboarding new students each term, Kauffold said that actually led to interesting and creative ideas. “Sometimes when you’re forced to think outside of the box, you find some amazing stuff,” he said.

Playtesting, for example, presented challenges they didn’t see coming. Conducted in the project’s final semester with senior citizens at the Institute of Aging, Kauffold found older users didn’t know to turn their heads when wearing the VR headset. Kauffold likened the phenomenon to when people first saw Monet paintings. “When it’s completely new, people don’t register what they’re seeing,” he explained. “It’s not part of your experience, they had no point of reference for what exactly is going on.”

Now, it became a user interaction issue, which was handed off to WNM students. Though the VR experience was meant to bring Rockwell to today’s younger generation, the game still had to resonate with the museum’s primarily senior citizen audience.

“This technology may be familiar to us, but for [seniors], it’s brand new and we have to accommodate that,” said Margarita Tanchuling, an M.F.A. WNM student. As a group, they decided on implementing visual prompts to tell users verbatim what to do in the VR world.

“For any kind of interactivity with any project, it requires a lot of skills involved,” Changying Zheng, WNM associate director, acknowledged. “UX/UI is our specialty and, [at first], that’s how we came into the collaboration project. But it turns out there are a lot of other things that were needed, so it truly became a learning process for us as well.”

From a numbers perspective, the Rockwell VR project had a total of nine students working on 3-D modeling and texture; eight students handling interaction design and scripting; two UX/UI designers, and five sound designers involved throughout its development.

Several students involved saw the opportunity to learn from other disciplines. Looking back on the project, Lashbrook, the only ILL student, said, “I learned so much from the collaboration in general, students and teachers. I learned the technical side of how you put a game together and how to collaborate amongst the different disciplines; also, working with the museum, it’s learning how to work with a client.”

Cody Jackson, a 2017 B.F.A. WNM graduate, said he felt like equals with the GAM students.

“There’s no real separation from one another,” Kauffold said. “There’s a fair amount of crossover in this project in the sense that this isn’t a game in the traditional sense, you’re not keeping score or anything, it’s much more experiential.” 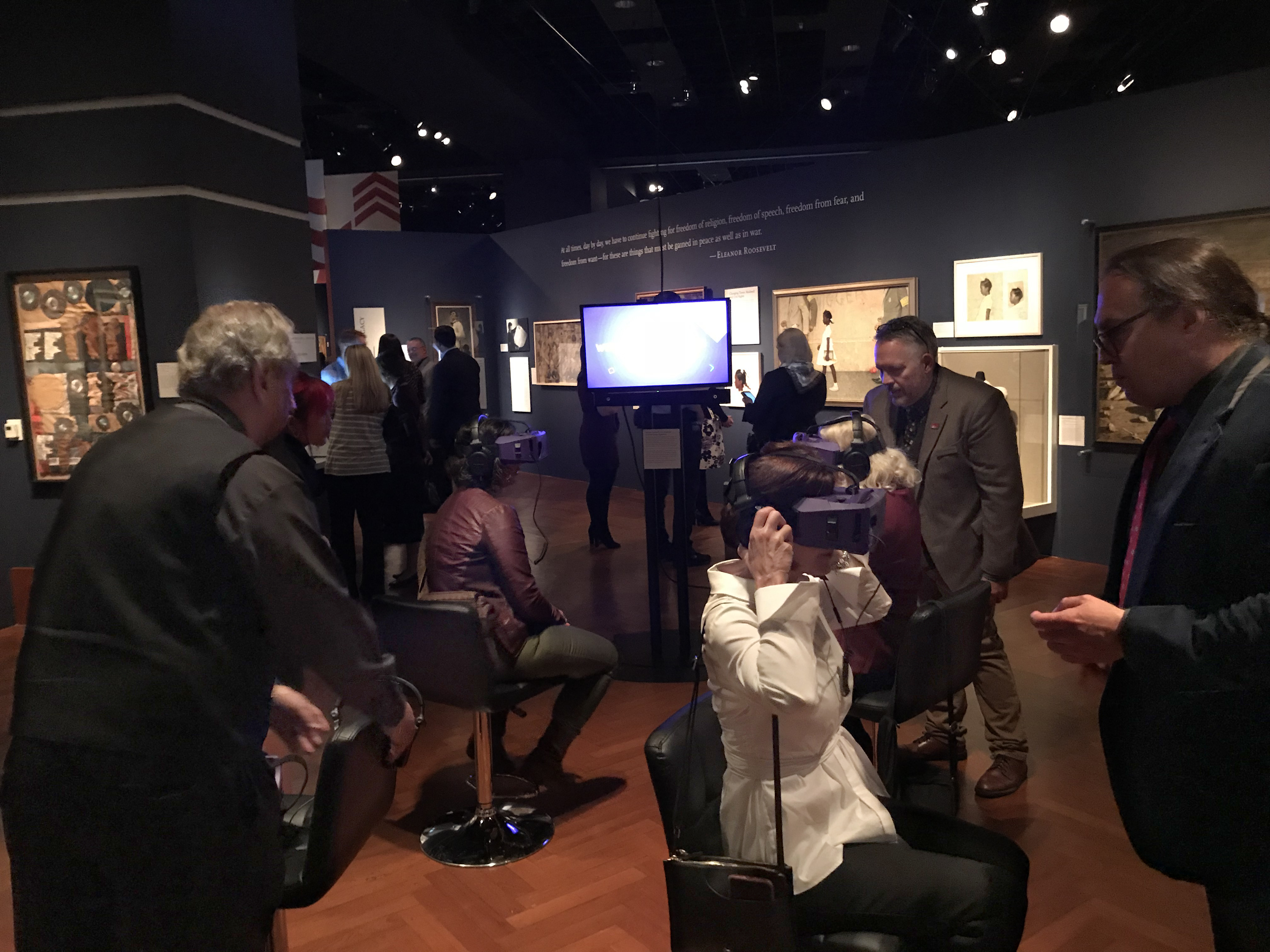 Leading up to the official rollout, GAM exhibited the Rockwell VR Experience at the 2018 Spring Show before shipping it to the east coast. Following the debut, the exhibit will travel to Michigan, Washington D.C., France, and Texas before settling at Rockwell Museum in Stockbridge, Massachusetts in Fall 2020. According to Kauffold, it is expected that GAM will continue to support the Rockwell experience throughout this timeline.

“This isn’t just a school project, this is a real-world project that is going to be out there and touring the globe,” said Zheng. “Imagine putting that on your résumé … Another thing really important for [the students] is not just the exposure, but also the experience that they’re getting for working for a large-scale project like this and seeing through that process.”

The Rockwell VR Experience is the first of its kind in Academy history. As a large-scale, multi-disciplinary and multi-semester endeavor, Kauffold admits it was equally a learning experience for the instructors as it was for the students. Being able to push limits of VR and how it can be utilized in educational spaces in this way was a first for his own career and will be the model for future collaborations to come.

“It’ll be sort of a way bringing this cultural touchstone to a lot of people who might not be able to experience it,” he explained. “Instead of imagining from reading about it in a book, we’re placing you into the 1930s and 1940s environment and showing you what it’s like to be there.”