The historic Honda building at 10 South Van Ness is receiving a second wind as SVN West, an event space run by Non Plus Ultra and home to sustainability startup Epic Cleantec. Non Plus Ultra has been working tirelessly to renovate the building, which once housed the legendary Fillmore West concert venue, in preparation for its first event on June 14.

With Non Plus Ultra busy focusing on the renovation of the interior Epic Cleantec undertook the renovation of the garden social area. The startup, which creates high quality renewable soil from the waste in water, wanted the garden to be a place to host events and demonstrate product success. CEO and Co-founder of Epic CleanTec Aaron Tartakovsky reached out to Academy of Art University’s School of Landscape Architecture to handle the redesign.

“A landscape architect had suggested that we reach out to the landscape department. We reached out to Jeff [McLane] and there was an interest to work together. [Non Plus Ultra] originally were planning on doing their own thing out there. We said we’d take it over and turn it into something beautiful and have a nice story about this very green, sustainable project,” Tartakovsky said.

LAN Director Jeff McLane received the query and pitched the idea to Chenglu “Lacey” Luo, an M.F.A. student, who in turn involved of a few of her classmates. Luo and three other students had to come up with their own individual designs in just three weeks to pitch to the Epic CleanTec team.

“They just called me one day and they said that the landscape architect told them to contact the landscape architecture program at Academy of Art,” McLane said. “Each student presented their own idea and we met once a week for three weeks and we did desk crits. They all came up with their own ideas and they each presented a separate proposal today. It needed to be flexible; if 75 people showed up, it would still work.” 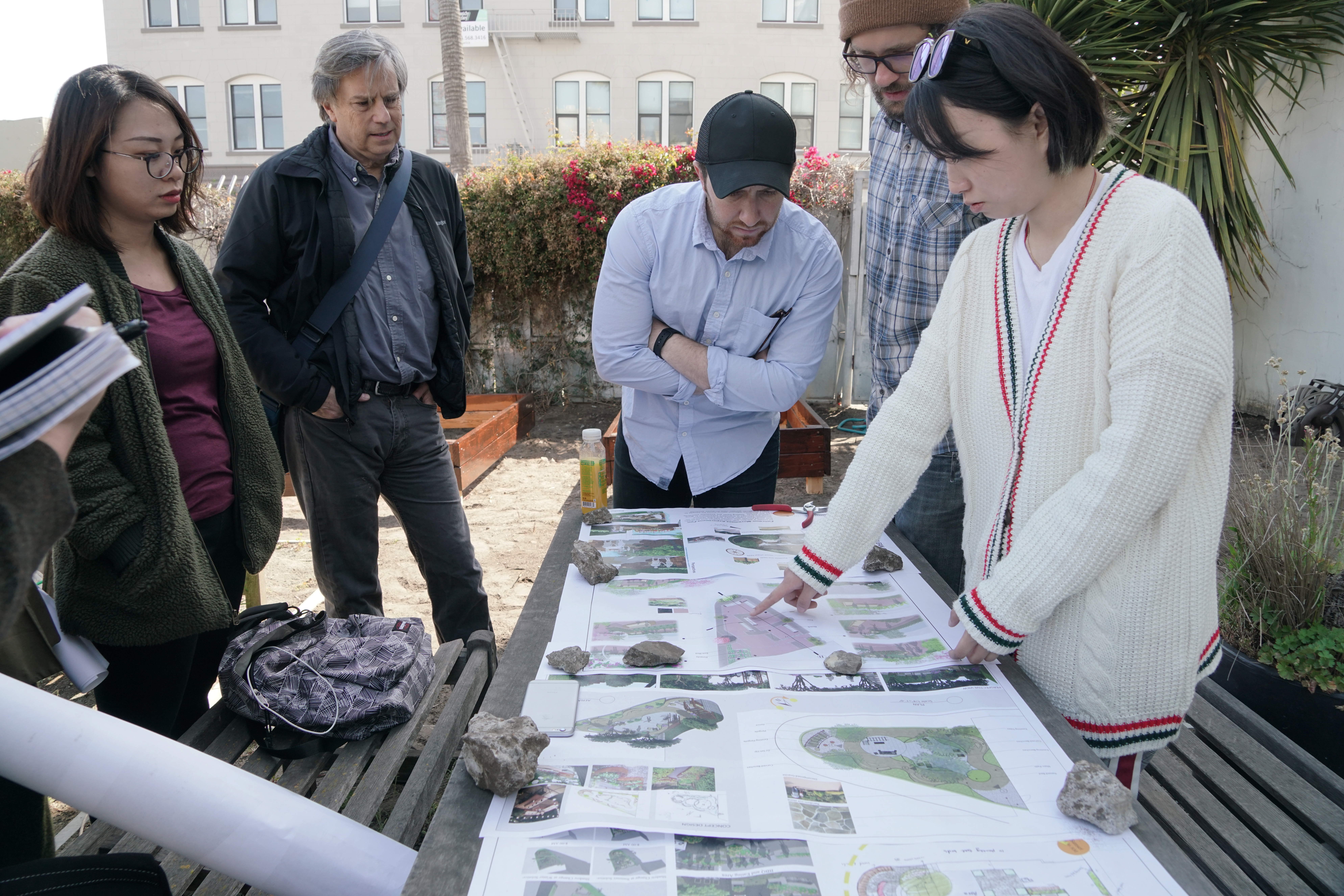 This was the second real design by Luo. Her first work being a residential location for her B.F.A. program in China. “Everyone wanted to have a good opportunity to present something new and we all decided to do it together. I think we do learn a lot from that. We study landscape and all the things [in lectures], but it’s not real life. This is real life. By doing this we can learn what can work, and it will help us improve our future concept development,” Luo said. “This project is to create a space for business and entertainment. It’s the people who are going to use it. These are the basic things you need to consider. When you design a project, you work on a lot of technical skills. You cannot just do what you want. You need to communicate with the people who will use it and your clients.”

One of the central challenges to designing domestic outdoor spaces such as Epic Cleantec’s garden is developing a smooth transition from the indoors to the outdoors. Because the location resides in a section of downtown San Francisco that is highly urban and industrial, Luo employed a walkway of large iron rings leading from the building exit into the garden. Metal was also employed in the choice of planters and benches to fit the theme of an urban oasis.

The communications were astoundingly positive. After the three week turnaround time, Tartakovsky saw the design for the first time. “To be honest, we gave them very little instruction and full artistic freedom. The basic parameters were that it was a showcase garden to show the growing power of the product. You don’t have to buy off the shelf fertilizer to do this stuff. You can do this in a more renewable sustainable way,” Tartakovsky said. “Phase two was to use this as an event space to actually create a little urban oasis in the middle of market, where otherwise it’s just buildings and streets. I’m completely blown away with this stuff. It’s brilliant. The visions they came up with—it’s so beyond what I had been thinking.”

Staying Safe in the City