The animal drawing class, ILL 267, a six-hour class at Academy of Art University’s School of Illustration (ILL), started the semester with six weeks spent on horses. Six weeks, because class instructor Tanya Ericson explained, “Everybody is just learning” and getting up to speed. Also, she loves horses. (Her cellphone ringtone is the sound of a neighing horse.) And, she used to bring to the drawing class one of her own horses—she had two, a white palomino Morgan and a mini horse—until the commute got too expensive. Now, she takes students out to the Marin Headlands where they meet up with a riding club from Berkeley. Or, they visit the stables for the San Francisco Police Mounted Unit in Golden Gate Park. After the horses, the class focused on dogs. 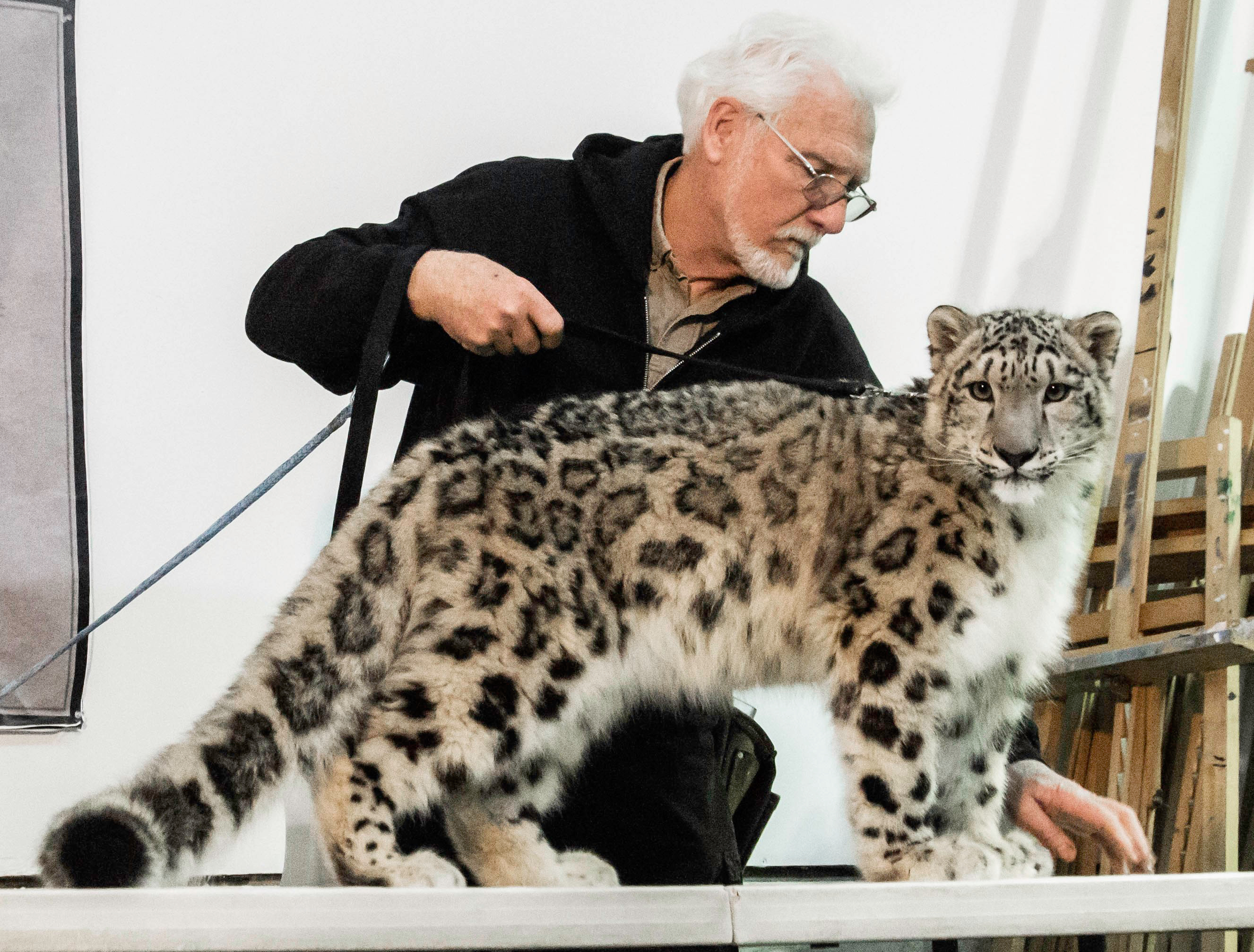 Guest Rob Dicely of the Wild Cat Education and Conservation Fund with a snow leopard. Photo by Adrian Childress.

Now, the most recent class session was devoted to drawing wild cats that were brought to campus by the Wild Cat Education and Conservation Fund, a nonprofit organization run by Rob and Barbara Dicely, who said most wild cats are endangered and they believe in the prevention of extinction through education and outreach. As Rob put it, “Students are learning to draw. They’re also getting an earful” about the precarious existence of wild cats on the planet.

For the class on April 3, five wild cats were showcased, from an 11-month, 60-lb snow leopard, to a six-lb Geoffroy’s cat that, according to the Dicelys, are the second-most hunted cat (after the ocelot) for its fur.

As ILL Director Chuck Pyle noted, “There are not many programs where can you sit down in front of live, nonprimate models, and learn to capture their morphology and anatomy so that your ability to design characters is authoritative. Tanya’s class teaches just that, plus, you can observe the animal and how they move, breathe, emote, and even give them the occasional ear scratching.” 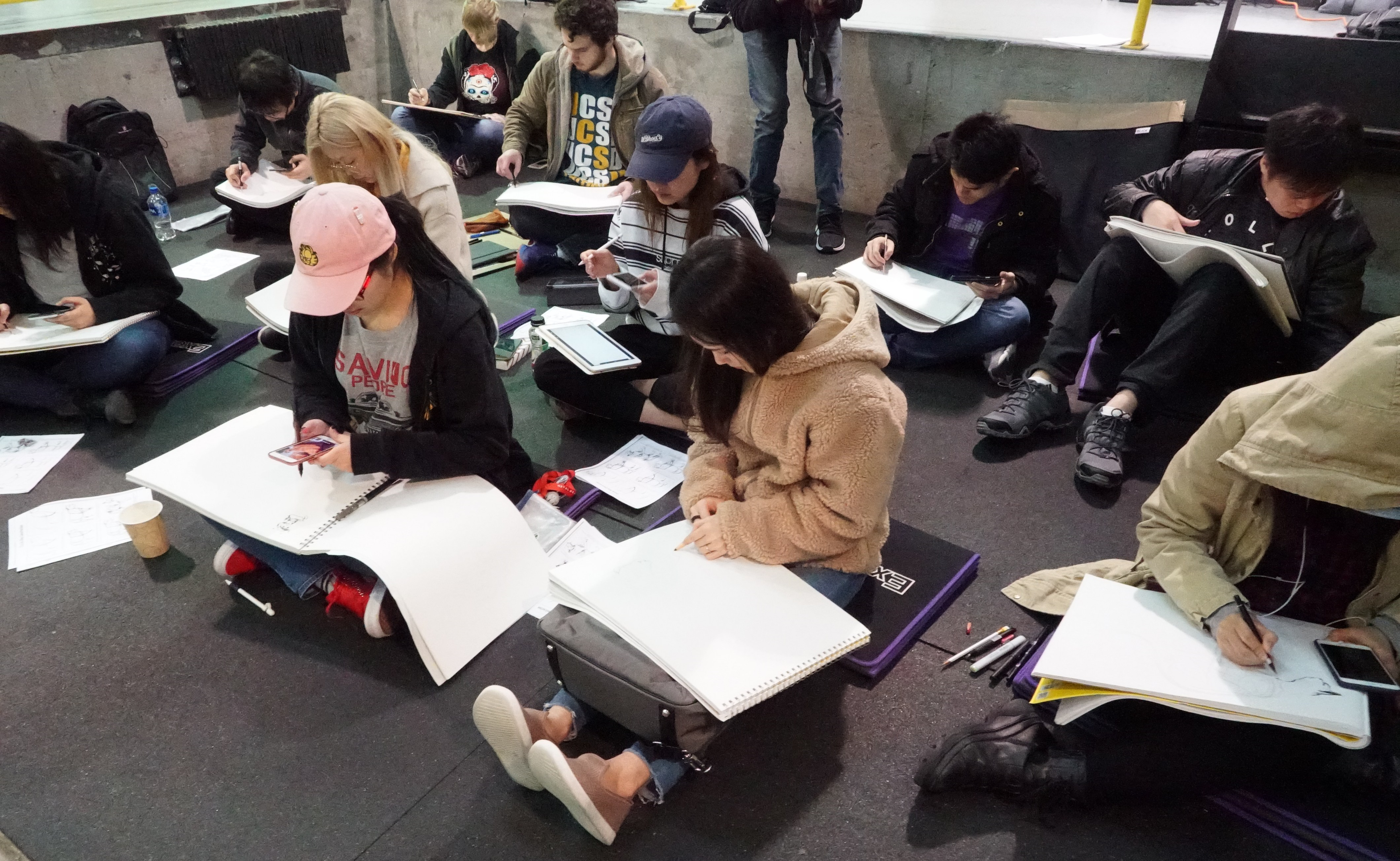 Students in Tanya Ericson’s animal drawing class have the unique opportunity to observe the wild cats in-person as they work on their sketches. Photo by Bob Toy.

According to Ericson, each animal is studied and drawn in stages, beginning with the skeletal system. “Once everything is in place,” she said, “we work on the muscles.” Students create a final rendering of the animal from the muscle illustration they’ve completed.

Ericson has been teaching the animal drawing class for the past decade and estimates that she’s been an Academy instructor for over 20 years. She’d been working at an animation studio across the street from the Academy when she first started teaching at the School of Graphic Design, where she taught Photoshop. For this ILL class, Ericson said students were allowed to work in any medium, from iPads to paper and pencils. Kyumin Heo, a game development student from Pusan, South Korea, worked with a sketch pad and a china marker and called this the most fun class he’d taken this semester.

Sitting directly in front of the table where the cats were presented as Rob slapped down morsels of meat to keep the cats occupied, Academy student Ariel Li, said she liked the opportunity to get this close to study anatomy and structure. That day in class, she’d worn a pink baseball cap with the cartoon cat Garfield. A graduate ILL student focusing on graphic novels, Li said the recent study they did on dogs gave her the material she needed for a cyberpunk story she’s been working on. 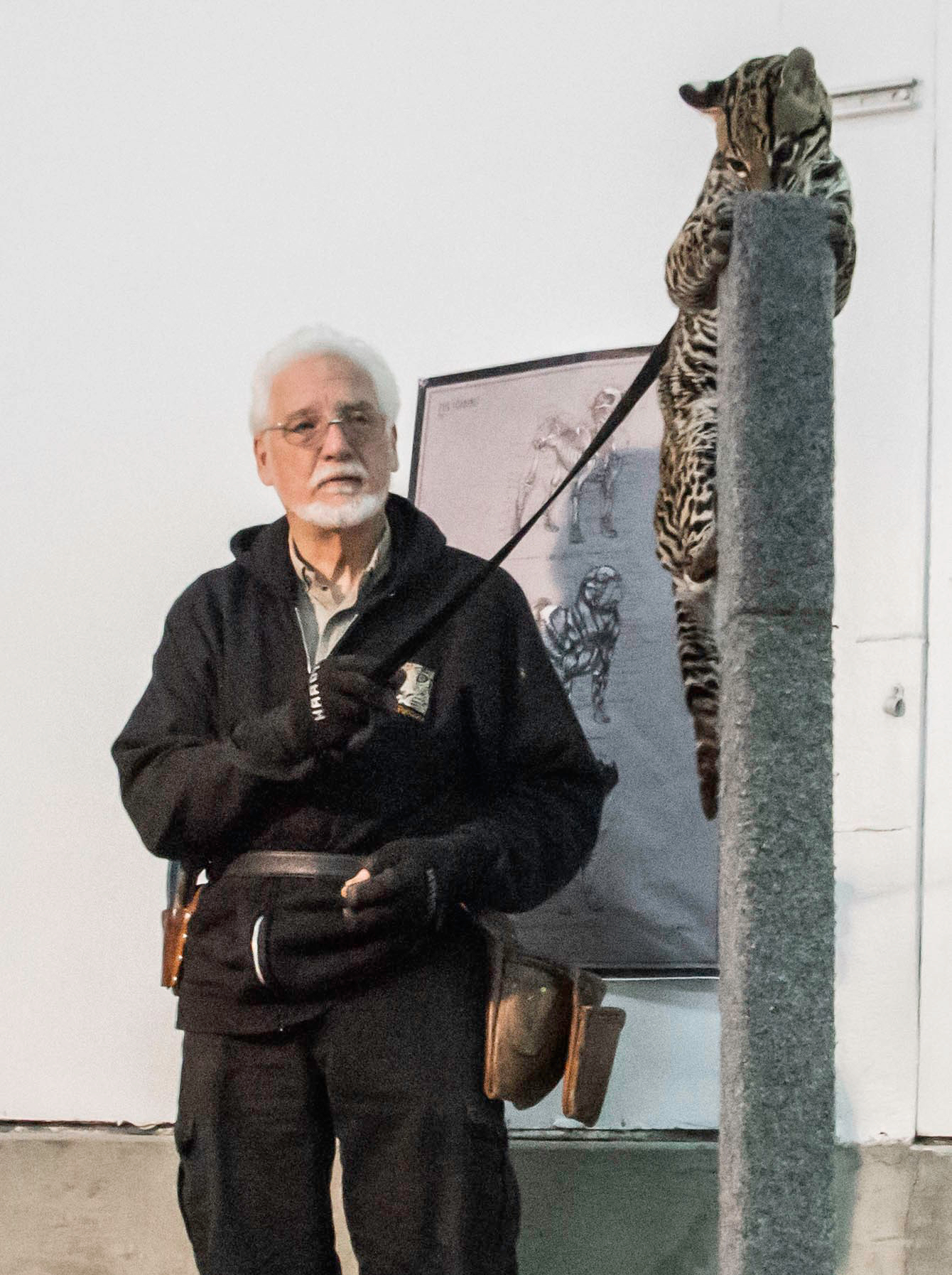 Dicely with a Geoffroy’s cat. Photo by Adrian Childress.

Connor Swan, a Redwood City native who’s finishing up his third year at the School of Animation & Visual Effects, where he’s focused on rigging, said this class was just what he needed to “learn about the movement of animals and how I’ll need to move my characters.” He added that it was the first time in a long time that he’s been able to see a wild cat this close. “Last time, it must’ve been at the zoo when I was 10.” But drawing them now was difficult because they move so fast. Then again, he said, “I just spent four semesters drawing people—I’ve drawn a ton of people. So, it’s refreshing to draw something different, though it’s difficult because they don’t sit still.”

At one point, Barbara reminded students “these cats are not models that are going to hold a pose for 30 minutes.”

That said, Ericson believed that drawing from life makes a difference. She was first convinced about using live animals years ago while a student herself, studying with Glenn Vilppu, the renowned animation artist, who once brought a goat to class. “I just drew better,” Ericson recalled and concluded, “That’s the only way—to draw from life.”

Adapting to the Evolving Industry