“6 Visions,” a group exhibit showcasing digital concept art and animation, was held at the Little Raven Gallery at 1015 Howard Street over the weekend of March 16–17. The show featured six artists, most of them alumni from Academy of Art University’s Schools of Visual Development (VIS) and Game Development (GAM). Exhibit Director Jing Ouyang, an Academy VIS alumna who received her B.F.A. in animation last May, said it’s the first time she’s ever put together a group show. A self-described “shy person,” she said she was motivated by the idea of showcasing work she’s completed since graduation and wanted to provide an opportunity for fellow artists. Moxuan Zhang, the exhibit curator and a current GAM student at the Academy, agreed and got to work inviting artists and designing the exhibit poster. Originally from Inner Mongolia, Zhang said he’s been in the U.S. for four years and has found that not only are there a lot of great artists but “a lot of them help each other learn.” And, he said he felt a group show would be an “opportunity for artists to share more knowledge.” 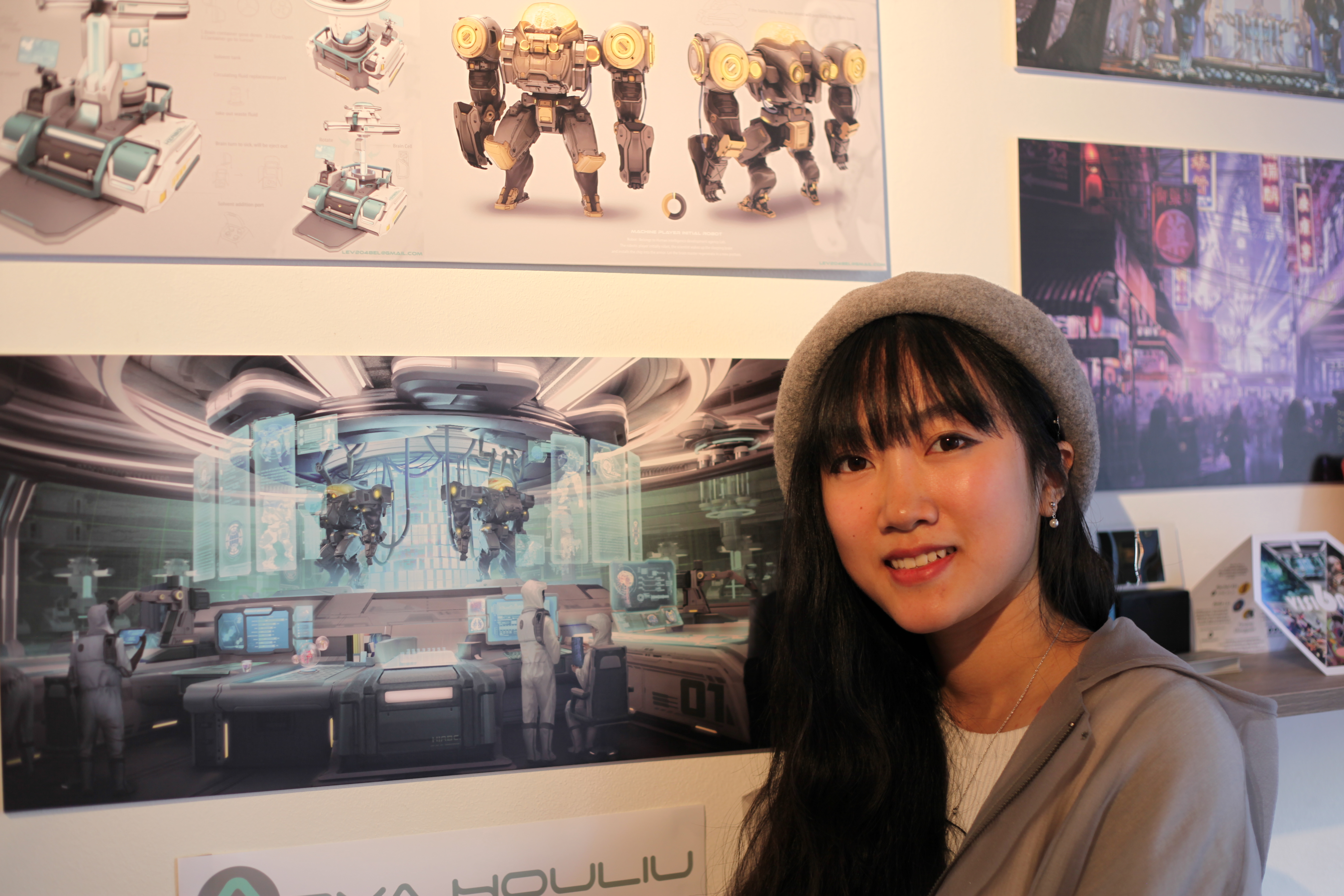 Houliu was already working as a concept artist at Tencent when she realized that she wanted bigger challenges and more opportunities to create. Her team leaders at work were Academy alumni, so she decided to follow the path they had taken. She graduated from GAM with an M.A. in 2018. Comparing the difference between her academic and professional careers, Houliu said, “At work, you need to solve the design problem—we need to make everything follow the project’s requirement. At school, you can do whatever you want.” Additionally, on personal projects, she pointed out that she’s responsible for an entire world. At work, she said with a sigh of relief, “I don’t have to think about everything.”

Currently: She works as a concept artist on console and VR games at Ready at Dawn Studios. 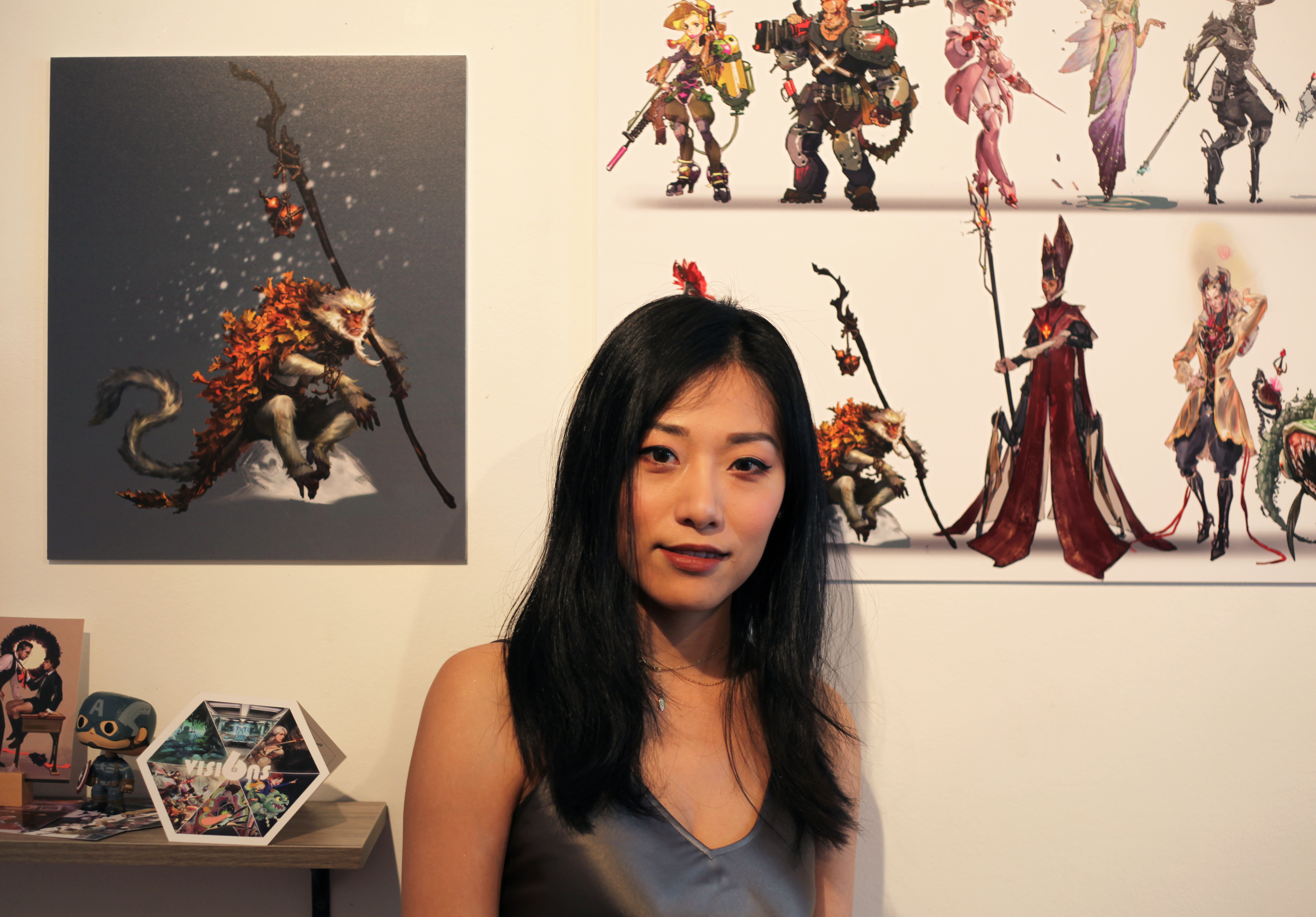 Though Liu started the Academy as a VIS student, she ended up graduating from GAM in 2018. Liu said she’s been painting since she was three or four years old. (Her first friends were fellow kindergarteners with whom she painted.) Later, as she studied poems in literature class, she’d doodle as class continued. Recently, when she posted her portfolio of student work on her personal website, it was suddenly “not about getting a good grade” and she received instead a job offer on the strength of her work alone.

Currently: She’s a concept artist and illustrator who has worked for Blizzard Entertainment, Tencent Games, and HTC Vive. 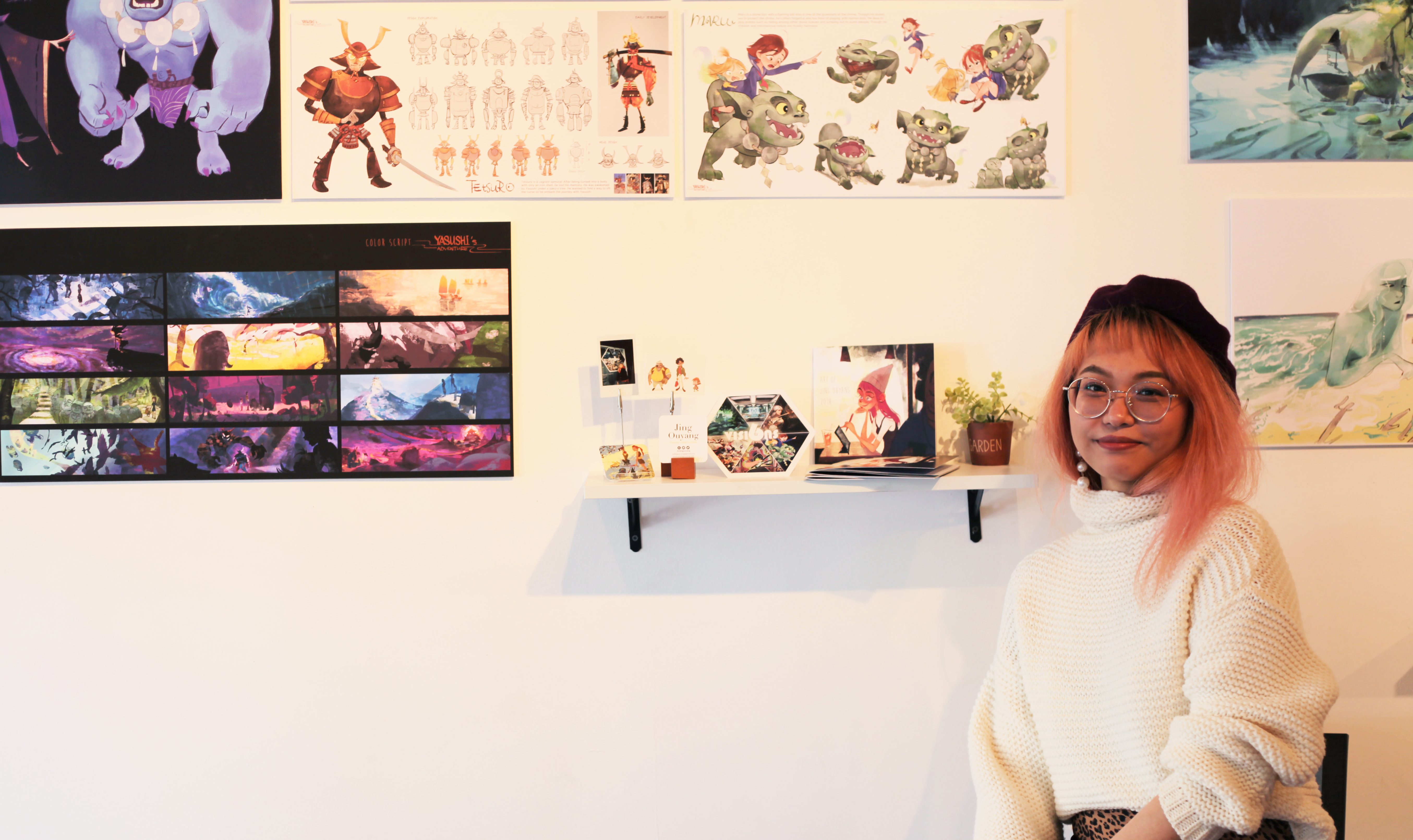 Before enrolling at the Academy, Ouyang had already published eight books of her own artwork—and that was when she was still a high school student in China. Admittedly, she didn’t enroll in college right away but went to work professionally until, she recalled, she “hit a creative wall” and decided to enroll at the Academy. As a student, she focused on realism but has since pivoted to something more stylized. “I wanted to showcase how much I’ve changed,” Ouyang said. “I had a story I wanted to tell. But school was over and there was no more homework—,” and, she added, “—no more rules. I wanted to see how far I could go just by myself.” But that came with its own challenges: “No one cares what you’re doing,” she explained. Now, instead of just doing a single piece for a class, she focused on an overall narrative, which she said she’d felt was missing from her student work. 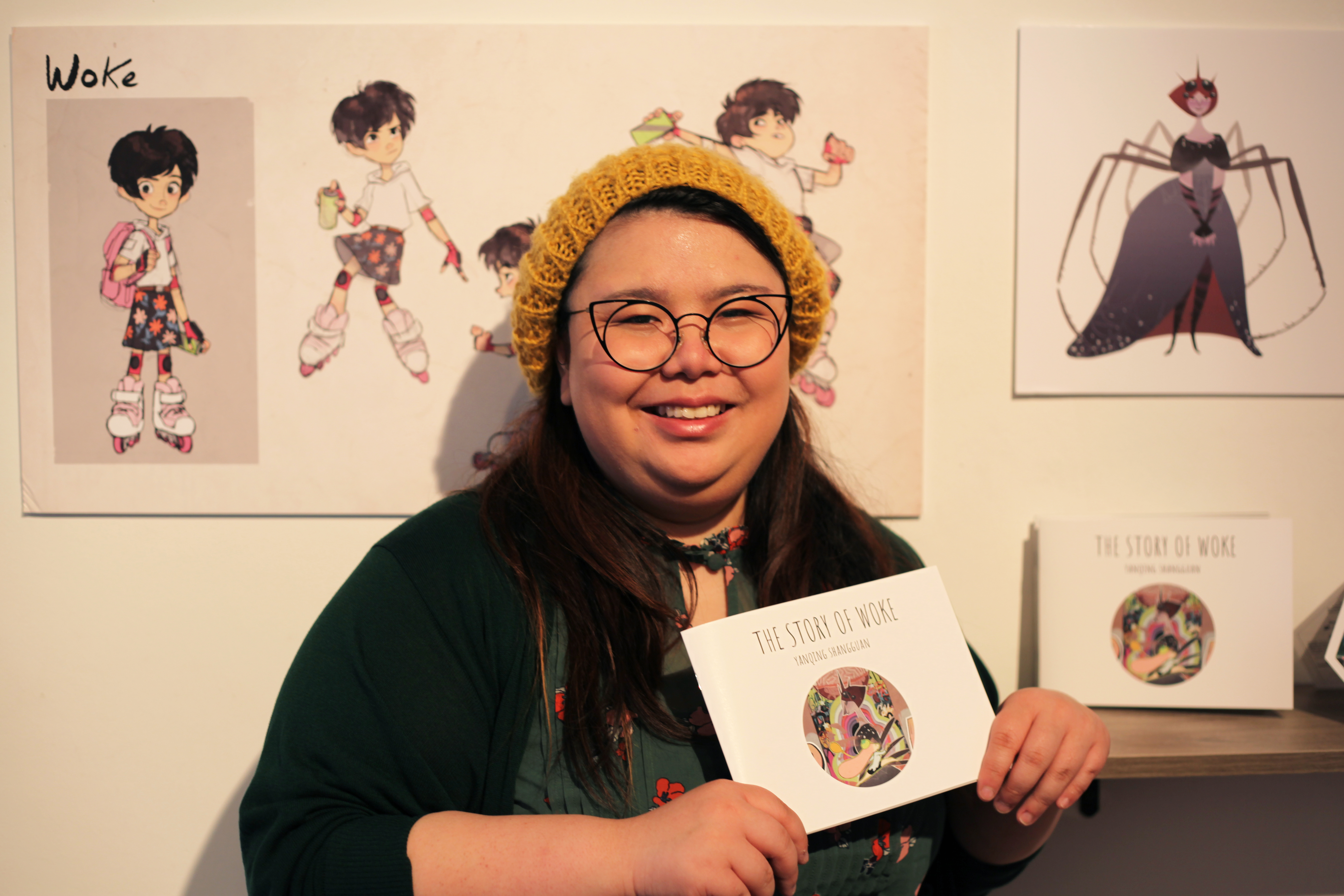 Shangguan said she hoped this exhibit would allow her to tell a story through a series of pieces of her artwork rather than just having a single piece displayed. She called “The Story of Woke” a personal project that explored a tough time in her life while also struggling with her admitted “closed” and “introverted” personality. Shangguan said it is in these times of personal crisis when “we see things—visions—from which we can create a story.” She said that even though she knew most of the other artists in “6 Visions,” the process of putting together the exhibit brought them all closer.

Currently: She works at a startup in Cupertino, where she’s a character designer for children’s educational iOS apps.

Rachel Xin, one of the “6 Visions” exhibitors. Photo by Erasmo Guerra.

A graduate of Beijing Film Academy in Animation, Xin moved to the U.S. and earned a master’s degree in animation from U.S.C.

Currently: Since June 2018, Xin has been working at Pixar.

It was just last year, at CTN (The Creative Talent Network), the annual animation expo held in Los Angeles, where Zhang met Ouyang, who had a table in the exhibit hall. Astonished to find out that she was, like him, a student at the Academy, he recalled saying, “Academy of Art students—they’re everywhere.”

Currently: He recently landed an internship at NetEase, where he’s a lead concept artist for a team that works out of China.

Drawing Inspiration From a World Of “Pure Imagination”