Academy of Art University’s School of Acting (ACT) presented Sarah Ruhl’s “Eurydice.”  The play, featuring graduate students and directed by ACT instructor Bob Shryock, is a retelling of the Greek myth of Eurydice. Eurydice (Maeron Yeshiwas) marries Orpheus (Jeremy Marquis), a musician, and on the night of the wedding party she falls to her death (and gets trapped in the Underworld) when she’s pursued by someone referred to in the program as “Nasty Interesting Man / Lord of the Underworld” (Valerie Compton). Orpheus descends into the Underworld to rescue his wife, only to lose her again when she decides to remain among the dead and the creepy chorus of Stones who are always hissing at and giving her the Dos and Don’ts for dead people. 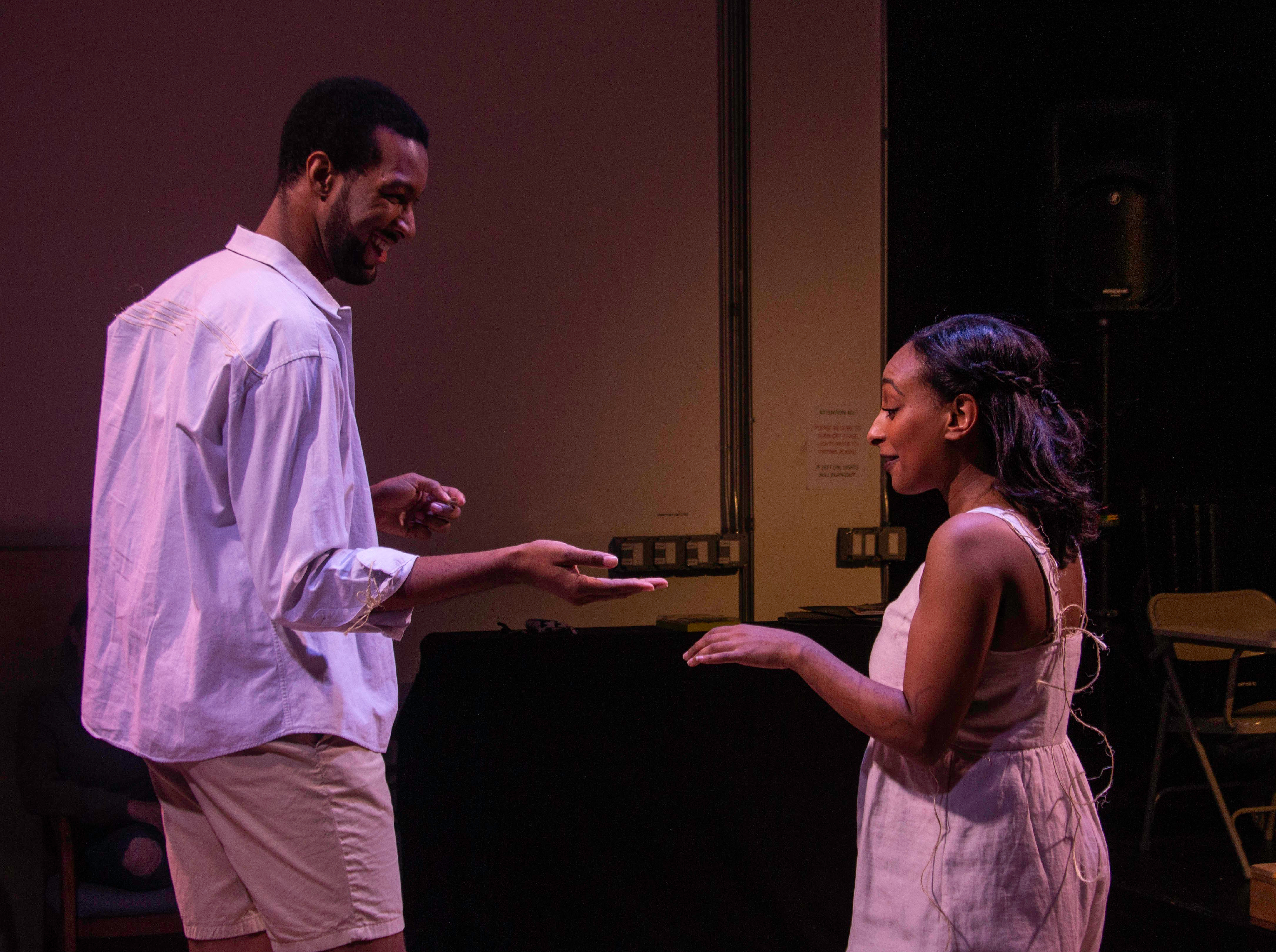 The production had a short run from Nov. 15 – 18 in a black box theater at 466 Townsend. At a dress rehearsal two days before opening night, Shryock said, “I’ve seen two other productions of this play and it continues to fascinate me. It’s not only an adaptation of the Greek myth of Orpheus and Eurydice with its universal themes, but it also strikes contemporary notes that Ruhl incorporated into the story.”

Shryock said the play has been in the back of his mind for years. And it came to the forefront when ACT Associate Director Damon K. Sperber tasked him with heading a production for ACT students in the M.F.A. program. Sperber’s one request: “Do something physical,” Shryock recalled him saying. Shryock explained: “A lot of my work is about the power of the actor’s body and how it communicates. After all, the play script dialog is only one element of a play.”

And certainly, there’s a lot of physicality in this production: an ensemble of actors who play the Stones (Merrick McWherter, Rae Cofsky, Blake Weaver, David C. Herrera, Mario Mazzetti, Gabbie Wen) are forever rolling across the stage floor for their scenes in the Underworld. In other scenes throughout the play, actors walk across planks set up on risers, like balance beams in a gymnastics competition. (It’s what Eurydice falls to her death from when she’s trying to evade the aggressive come-ons from the Nasty Interesting Man.) And as Eurydice and Orpheus travel to and from the Underworld, fellow actors lift pallets to give form to an elevator that rains. Also, those Stones not only speak in lilting madman tones, but they also bang actual stones together to punctuate their words. 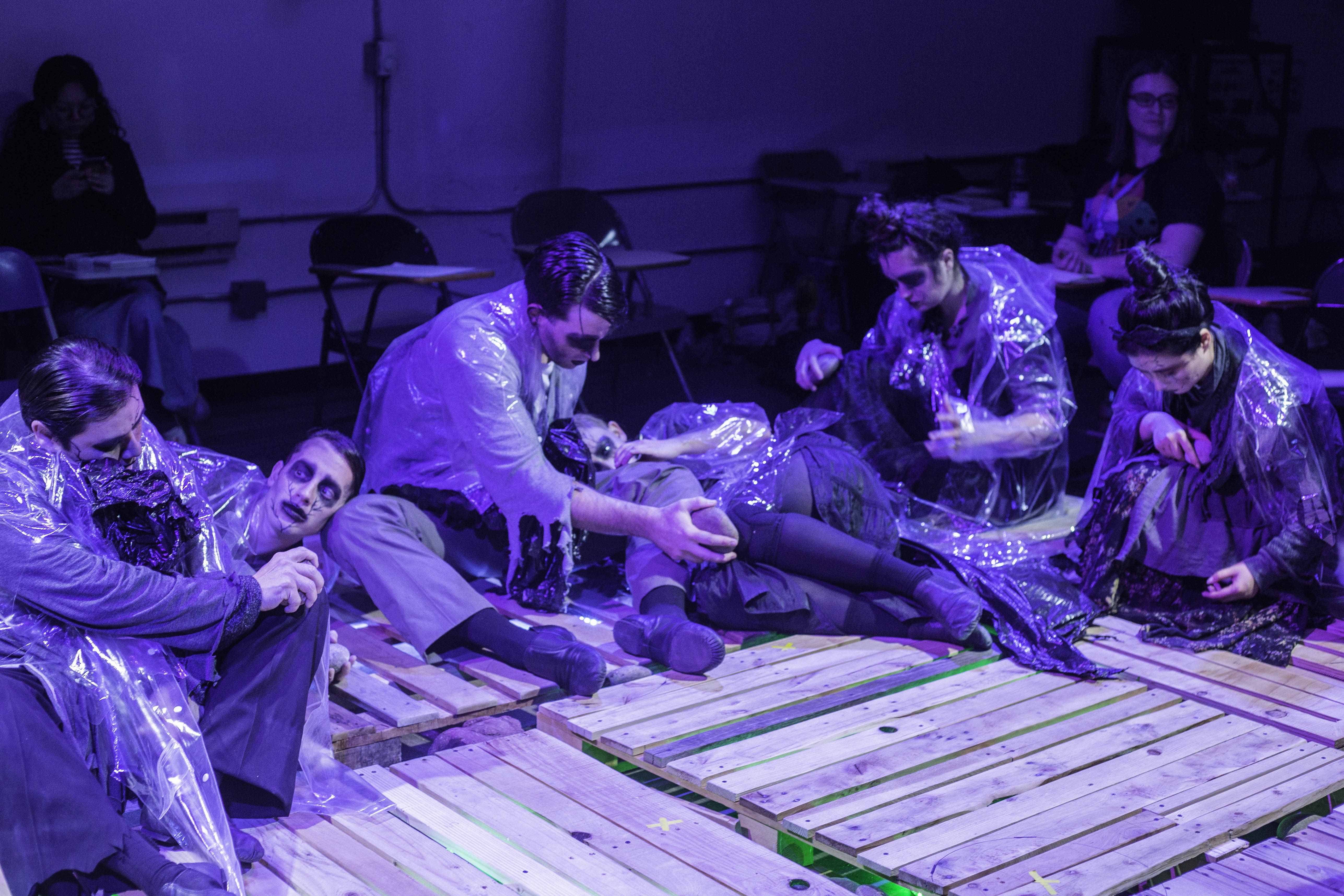 For this production, Shryock cast more than a single actor to play some of the Stone roles. “This provided more students an opportunity to be in the production,” he said, adding, “So many of the auditions and callbacks we had were strong and we wanted to bring as many of them as possible to the production.”

Shryock said that working with this particular cast, he shifted a lot of the responsibility for what happened on stage to them. With this show and his acting students in general, he wanted to instill within them the “importance of the ensemble, trust, and shared responsibility.” He pointed out that “on the commercial end of this industry, it’s so much about individual star power and self-promotion.” Here, he wanted to impress on his students that being an actor was about community and helping each other shine.