The Kids are Gonna be Alright

At a recent talk at Academy of Art University’s School of Architecture (ARH), Takaharu Tezuka, the renowned Japanese architect and professor at Tokyo City University, pointed out to the crowd that he always wears blue—always. From his shoes and socks to his t-shirt and, even, his iPhone. Then, sharing family photos in his multi-media presentation, he introduced his wife, dressed in red, and his children, a daughter in yellow, a son in green. The family car was a yellow bug-like roadster with a sunroof. And while Tezuka did not say whether there was a code to the primary colors in which he and his family dressed, he did admit, “I always start my story with my family, because all of my ideas come from my family.”

His family also takes a large part in turning those ideas into reality. He and his wife, Yui Tezuka, a fellow architect, established their firm, Tezuka Architects, in Tokyo, Japan, in 1994. Their firm, which is best known for ground-breaking award-winning work, like Fuji Kindergarten, base a lot of their own design thinking around the seemingly casual observations Tezuka makes of his children interacting with an environment. And while there may have been a few bumps and bruises suffered along the way, Tezuka shrugged it off, insisting that not only is “a small dosage of danger okay,” but that the stumbles and falls are important for a child’s development. “That’s how they learn,” he said. “That’s how they develop motor skills.”

With playful irreverence, self-deprecating wit, and a knack for sharing anecdotes about what could be considered a provocative approach to the practice of architecture, Tezuka spent the evening telling stories about his firm’s projects—from that iconic Fuji Kindergarten to lesser known projects such as designing a chamber of commerce on the site of an old silkworm factory that was once the model for industrial modernity in Asia. 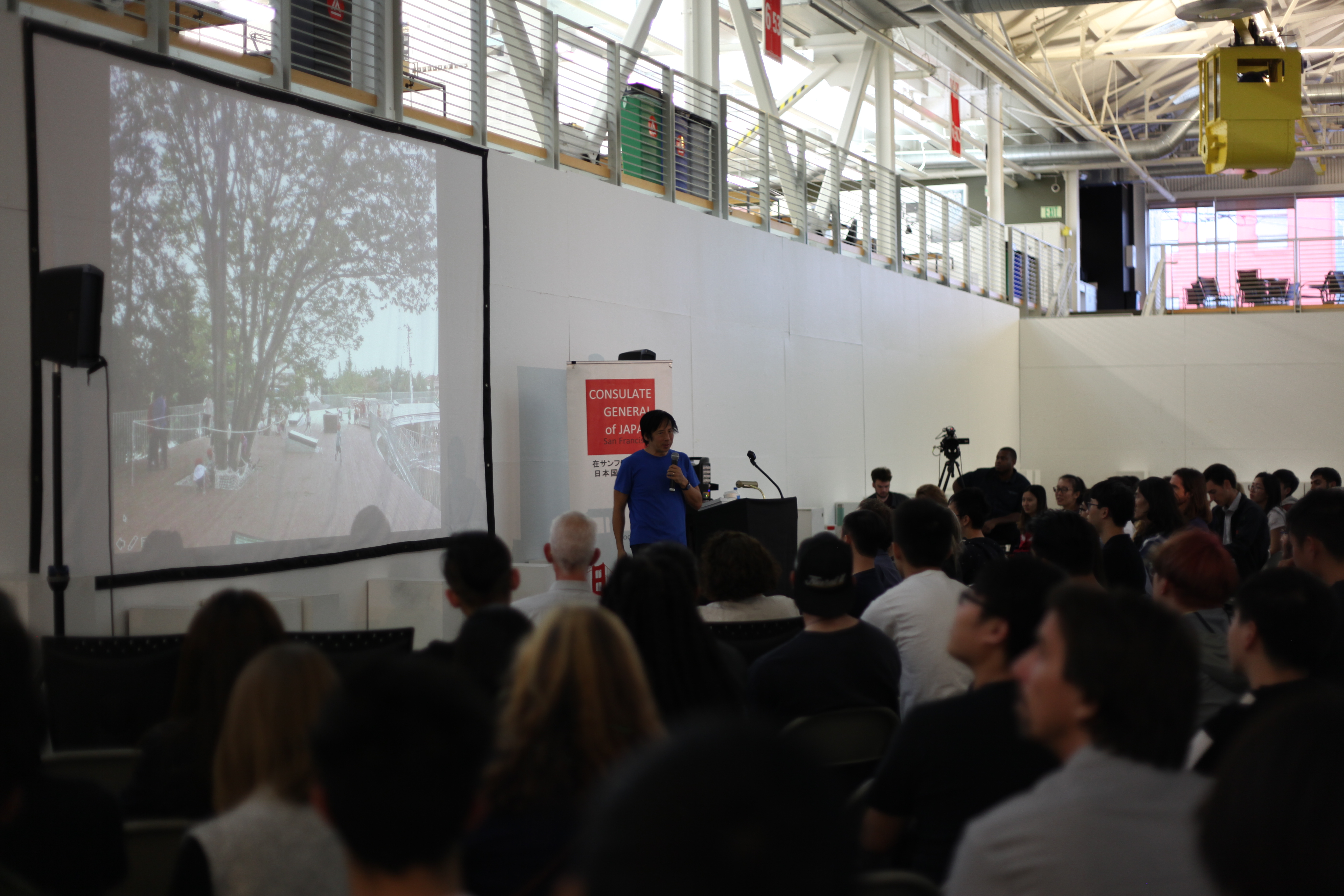 Takaharu Tezuka speaks to a packed crowd at a recent ARH fall lecture about his Fuji Kindergarten project. Photo by Erasmo Guerra.

The event, which was a joint collaboration between the Academy, President Dr. Elisa Stephens, and the Consulate General of Japan in San Francisco, was the most recent talk by distinguished guests of the ARH Fall Lecture Series.

A number of Academy students who attended the presentation said they were particularly interested in Tezuka’s experience designing schools for young children. It’s what had brought out Ting Chih Jen, a second-year interior architecture graduate student from Taiwan, whose graduate thesis project is focused on designing a children’s daycare center.

Po Hui, another second-year interior architecture graduate student from Taiwan said he’d learned from a friend’s Facebook post that Tezuka had visited his hometown of Hsinchu last month. And now here was his opportunity to listen first-hand to the architect himself and, he said, “Hear what his biggest challenges have been as an architect.”

Imelda Ela, a B.Arch student from Equatorial Guinea whose current studio class project is to design an art school for kids on Market and Valencia Streets in San Francisco, said she felt a sense of relief after the lecture. She’d been feeling exasperated about how much she felt she didn’t know but relaxed a little when, she recalled, “He said, ‘You’re young. You don’t need to know everything. Just go out there and get exposed to what you want to know.’”

That message of exposure and observation, of relying on personal intuition, also resonated for Paula Nicoli, a junior M.Arch student from São Paulo, Brazil. For someone deep into her academic studies, it was startling to hear the advice. Nicoli said, “To not only rely on analysis but to feel and observe as well.” She added, “Not overthinking something—that’s the hardest thing to do.”

Tezuka warned students against too much academic study and analysis and, especially, the practice of looking for ideas in design magazines, which he called obsolete by the time they appear in print on newsstands. Instead, he encouraged students to rely on first-hand observations, collaborating with others in specialized fields, and trusting their own instincts to clue them in on what they need to know.

At his own firm, he pointed out that no one was allowed to work weekends or to report to work before 10 a.m. on a weekday. He seemed most proud of the fact that his office had celebrated eight marriages in the past few years. “If you don’t know happiness, then you can’t provide happiness,” he said. “And that is our job.”