Three years ago, Cristo Staedler had an apartment, a girlfriend, and two dogs. He lost everything as he struggled with drug addiction.

“I was just left with my car,” he recounted. A current Academy of Art University undergraduate student in the School of Architecture (ARH), Staedler said that at the time he was in Monterey, California, living out of his Ford Focus. “Every belonging was in my car. I couldn’t even look out the windows.” He also had his pit bull, Aubry. And then he lost even more when he totaled his car and he shared, “I was on the street for real.” He recalled thinking to himself. “Do you want to get better? Or, do you want to die?”

After a stint in rehab, he got sober and went back to school, enrolling in a landscape architecture program before transferring to ARH. Staedler said he doesn’t go to NA (Narcotics Anonymous). Instead, his own serenity prayer has been school. “I just dive into my work,” he said.

Now, as a second-year B.Arch student enrolled in ARH 250, when the idea for a homeless shelter project was first proposed—a shelter for up to 20 people, covering 15,000 square feet for an existing site, which happened to be the parking lot across the street from the ARH building at 601 Brannan—Staedler shared his story with the class. His instructors advised him, “If it’s too personal, take a step back.” He stepped forward instead. “I told them it’s gonna be alright,” he said. Among his classmates in the B.Arch program, who were tasked to reach out to and interview homeless people to inform their designs, Staedler felt his own experience made him uniquely suited to create a sensitive and empathic design of his own.

At the recent ARH 250 class review, in which all of the works-in-progress were pinned to the walls, Staedler explained that when he was living in his car, he was always cruising abandoned industrial areas in which to park. His car windows were broken, making him incredibly vulnerable while he slept.

During the research for his design, he came across a program called “Safe Parking” in San Diego and based on that, he said he wanted to “take that idea to the next level with architecture.” His concept was a 14-unit structure that was a cross between a parking garage and a roadside motel, where homeless people could live in their cars, could drive directly into a unit, and access private bathroom and bedroom areas. 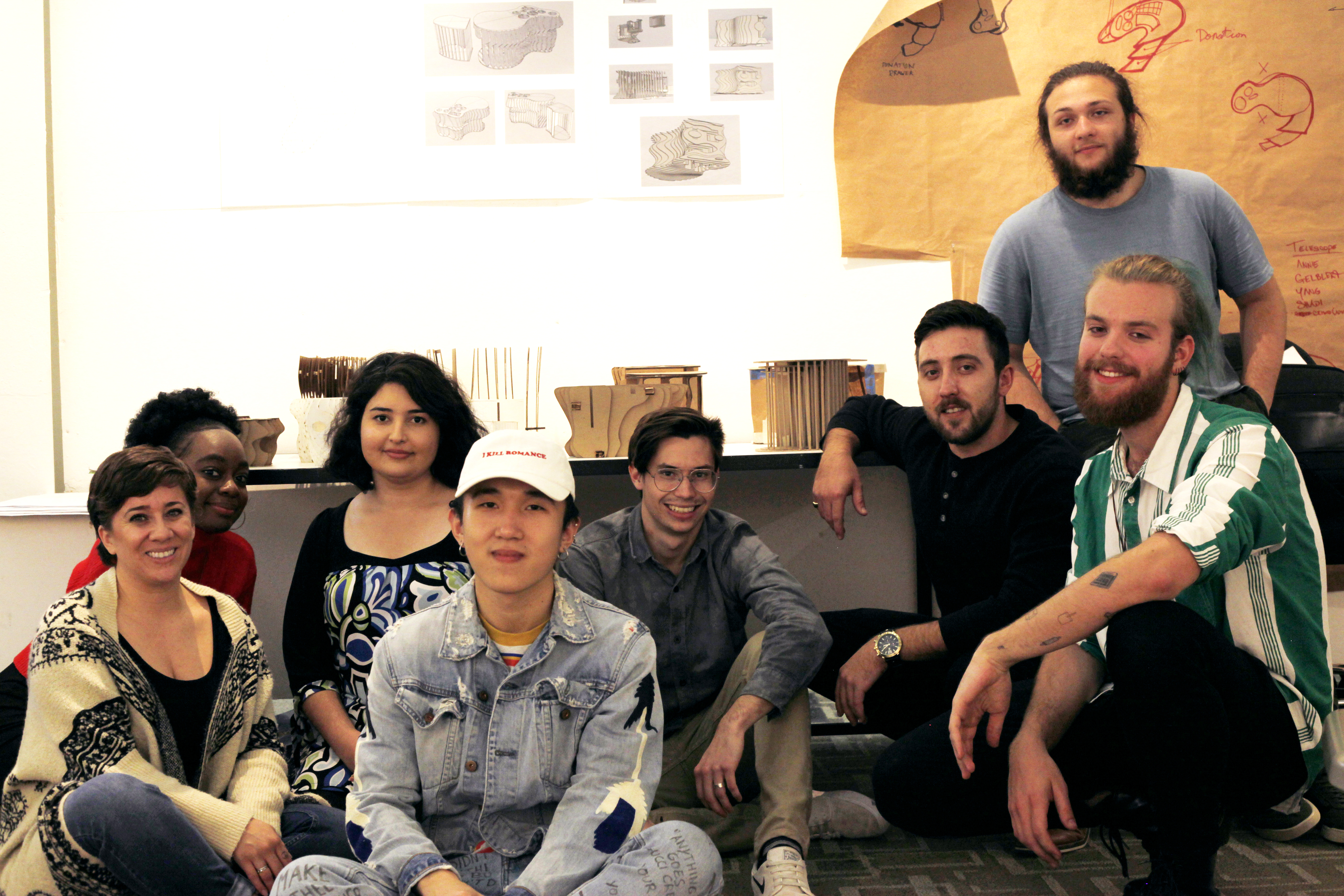 His was just one of the many innovative designs that were presented that afternoon. Sameena Sitabkhan, the B.Lab coordinator and ARH instructor who co-teaches the course, said the purpose of the class was to get students out of the design studio and get them engaged with the community, to have them collect first-hand narratives and stories about the clients (and their specific needs).

And while Sitabkhan acknowledged that past design reviews were usually more formal, with a three-person panel providing a critique, spending half an hour on each project, which left everyone “fried by the end,” the salon-style discussion that took place on this particular afternoon was more casual, putting everyone at ease and “making it easier for folks to talk about their projects.”

Doron Serban, ARH emerging technologies coordinator, who oversees the digital curriculum and co-teaches the design studio with Sitabkhan, said the salon-style “made students much more receptive to feedback.”

Christina Smith, a third-year student said she spoke with a homeless man named A.J., whom she met on Bluxome Street, the alleyway behind the 601 Brannan building. A.J. was pushing a shopping cart that was overloaded with belongings and held down with a tarp. As Smith discovered, “He picks up stuff not just for himself but for others in the community of people with whom he was living.” Smith’s project was focused on the homeless population that was 50-plus years old, emphasizing healthy eating habits and recycling. She had designed a garden in which residents would be able to plant and harvest vegetables while also learning about time management; not just about scheduling day-to-day and seasonal activities but also just being grounded in the passage of time itself. Smith designed recycling bins for various materials, and areas where people would be able to take educational workshops and counseling sessions.

Smith said the interview with A.J. lasted eight to 10 minutes. “He understood what we were trying to do,” Smith said. It was the first and last time she’d seen him in the neighborhood.

Shadi Vakilian, a third-year student, spoke with Tyrone, whom she encountered collecting bottles that he planned on taking to a recycling center in Bayview. Her project focused on a theme she called “celebrating imperfect,” referring to all of the imperfect fruits and vegetables that ultimately get tossed out when farmers refuse to ship them or grocery shoppers refuse to buy them. She was guided by the Japanese principle known as “wabi-sabi.”

ARH Undergraduate Director Jennifer Asselstine said she has learned “not to use the word ‘homeless’ as a noun or label but as an experience.” And it’s not just one singular experience either. She said the projects reflected an attempt to meet a set of needs “across populations—plural.”

Johanna Hurme, a founding partner of the firm 5468796 Architecture based in Winnipeg, Canada, was on campus with her partner Sasa Radulovic to give a lecture later that night. Hurme also participated in the ARH 250 review and commended the students for “having a pin-up at this point,” but urged them to take this moment to reflect and offered the questions she asks herself in her own work. “What is it saying? What is it telling me? Why? Why not?”

Artur Festugato Regalin, a second-year student from Caxias do Sul, Brazil, appreciated the specific feedback he received on his garden-focused design from the renowned architects. “It’s very realistic,” he said. “When you need to consider real-world parameters like budgets and materials.” Despite the potential limits, he said, “You’re challenged to think out of your comfort zone to get where you need to go.”

Staedler, who said drug addiction had brought him to his knees, called architecture his redemption. “Designing homes—but more than that—designing a homeless shelter is a healing process for me,” he said.

The Kids are Gonna be Alright

A Look at a Designer’s Workplace of the Future