“The Front Runner,” the new film from director Jason Reitman, chronicles the fascinating story of former Colorado Senator Gary Hart (portrayed by Hugh Jackman) and his Democratic Party presidential bid for the 1988 election that came crashing down over the course of a single week in 1987 due to an alleged extramarital affair. Directed from a script written by Matt Bai (former political correspondent for the New York Times magazine and current national political columnist for Yahoo News), Jay Carson (former press secretary for Senator Hillary Clinton’s 2008 presidential campaign), and Reitman, “The Front Runner” is based on Bai’s 2014 book, “All The Truth is Out: The Week Politics Went Tabloid.”

While in town last month for the Mill Valley Film Festival, Academy Art U News sat down with Reitman, Bai, and Carson to discuss the making of their new film and how a forgotten moment in political history was a catalyst in reshaping how journalists cover politics. 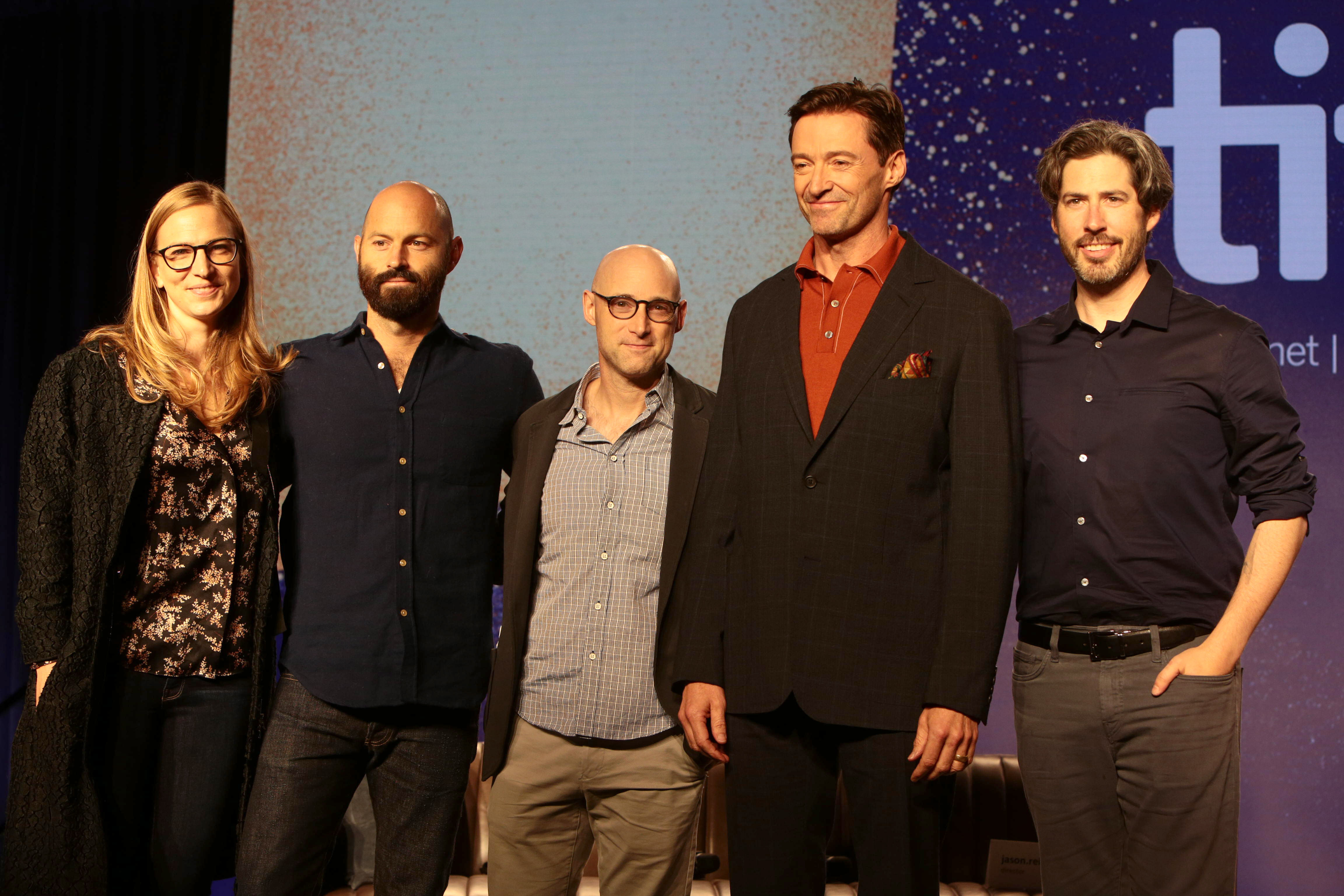 Told from a panoramic point of view at a frenzied pace to authentically capture life on the campaign trail, “The Front Runner” doesn’t dictate right and wrong to its audience; instead the film challenges viewers to decide what matters the most to them about a person that’s running for public office. Can a popular candidate’s strong policy and idealistic views outweigh a lack of transparency and flawed judgment in their personal life—and should it? What kind of information do we want to know about candidates and why does it matter?

“We’re constantly trying to figure out right now what we should know about our leaders and what deserves time for conversation,” explained Reitman. “There’s clearly a difference between the candidates who experienced shame today and likely leave the race versus the candidates who have no experience of shame and not only do they stay in, but they thrive in their shamelessness, and it makes us all wonder where does this start?” 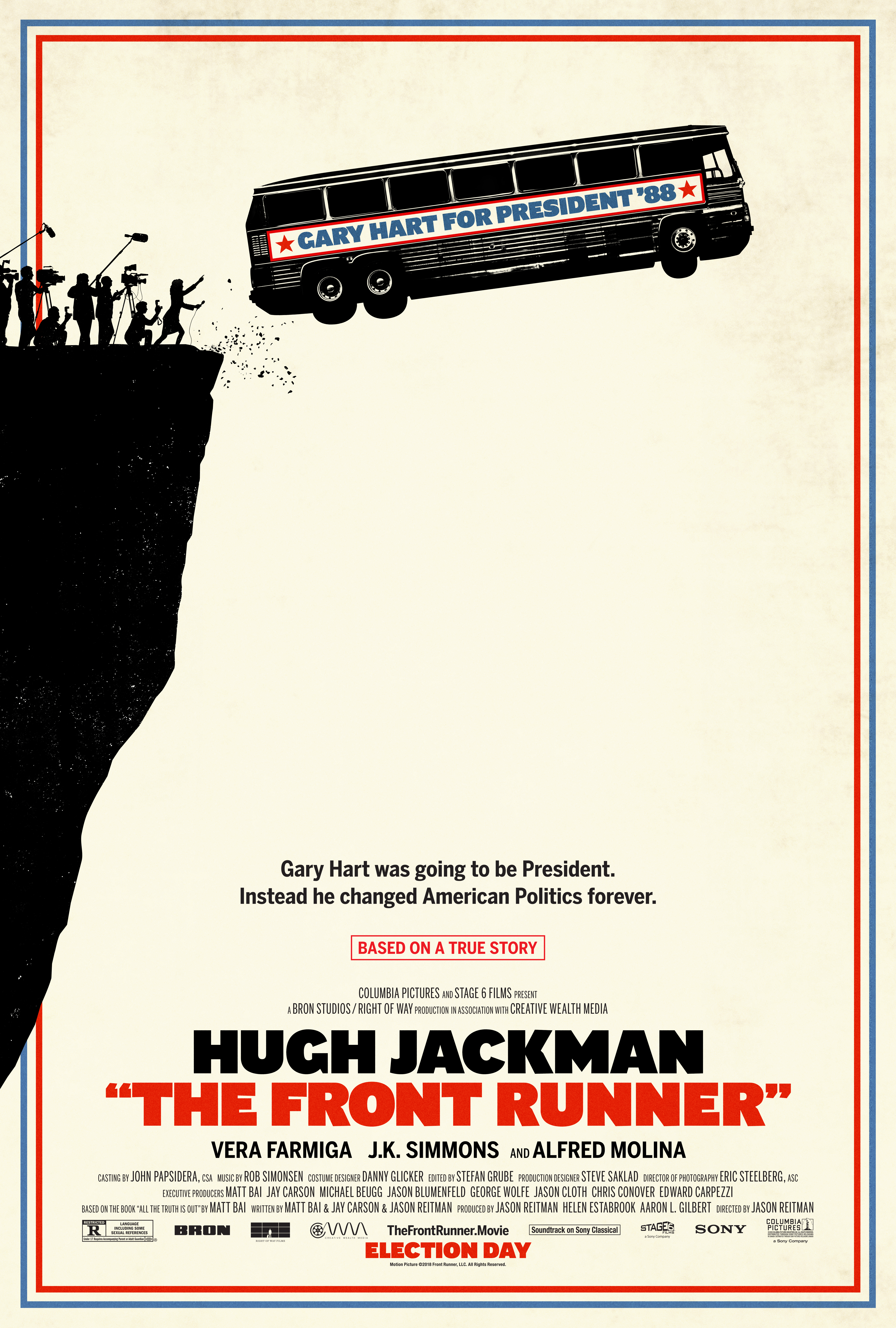 The director continued, “We obviously can’t explain everything, but here is a thread that kind of begins the conversations of private and public, about gender politics, about relevancy, and brings up these questions about what we spend our time talking about because politics have become our entertainment.”

For Hart, the moment his campaign unknowingly began to unspool started with an anonymous phone call made to The Miami Herald. The result of the phone call makes for quite the cinematic moment, one that is almost guaranteed to make moviegoers not familiar with the story react in disbelief.

Picture this: you have two reporters from The Miami Herald questioning the presumed next democratic presidential nominee in an alley behind his townhouse in the middle of the night about a young woman that they’ve witnessed come and go from his home, all while a photographer snaps away. Pretty wild, right?

“We had the same reaction,” said Carson. “I remember Matt telling me the story again, ‘yeah, they confronted him in the alleyway’—Matt’s not an exaggerator—so when [he] says that it’s true, I was like, wait, he’s obviously exaggerating for the first time. They confronted him in an alleyway behind his house? ‘Yes, in an alleyway behind his house!’”

Bai added, “That it had happened and we basically forgot that it happened is really kind of mind-boggling.” 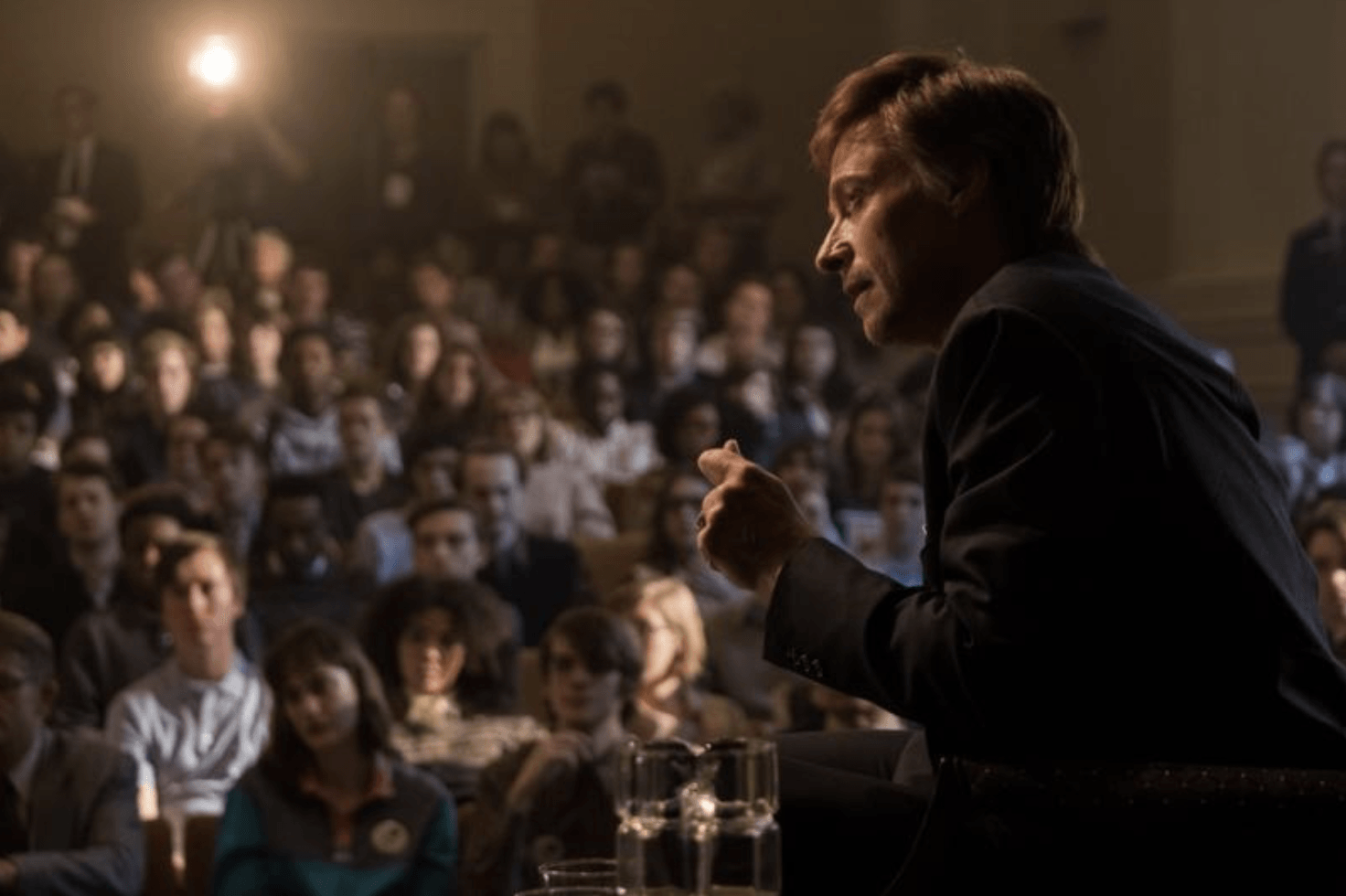 Director Jason Reitman on Hugh Jackman playing Gary Hart: “I knew this was a character that we were going to be trying to understand from the outside, which is a very tough thing to play—an enigma. … So how do you play someone who we’re trying to desperately understand from the outside, but he’s preventing us from coming in? It was a daily joy to watch him figure this role out.” Photo Credit: Frank Masi. SMPSP ©2018 CTMG, Inc. All Rights Reserved.

What audiences will come to learn early on in the film is that Hart was more in tune with old-school politics, where the job was separate from your personal life, be it your marriage, health, family, what have you and was counting on a certain amount of discretion. But in a post-Watergate existence, withholding information from the public and expecting the press to turn the other way was no longer a given. And with a single question and a flash of a camera in the middle of the night, political journalism crossed over into unchartered territory.

“You’re seeing a moment change, and you’re thinking, ‘I can’t believe it was only 30 years ago and all of this was new,’” said Bai. “We’ve been trying to figure our way through ever since, and I think that’s part of what makes [the film] relevant.”

Reitman, in a follow-up email, described the confrontation as being “like a western standoff in the setting of a film noir.” The scene was shot on the film’s final night of shooting, and the director had shared that while he had visited the location multiple times and had gone over the characters’ steps and corresponding dolly movements, it was truly the actors that elevated the scene.

“None of my prep mattered in relation to what the actors brought that night,” Reitman explained. “It’s the electricity of Hugh, Steve [Zissis], Bill [Burr], and Nyasha [Hatendi] that make the scene come to life.”

According to the director, Jackman, early on during preparation, said that he never wanted to feel like he could have done more. “And I think that defines Hugh Jackman,” Reitman remarked. He further revealed that the actor knew speeches of Hart’s that were not in the film and was well-versed in the politician’s talking points.

“Hugh was ready to talk about anything. You could start any conversation,” said Reitman. “When he does that press conference at the end, he didn’t know where the questions were going to come from, but he was ready for it.” 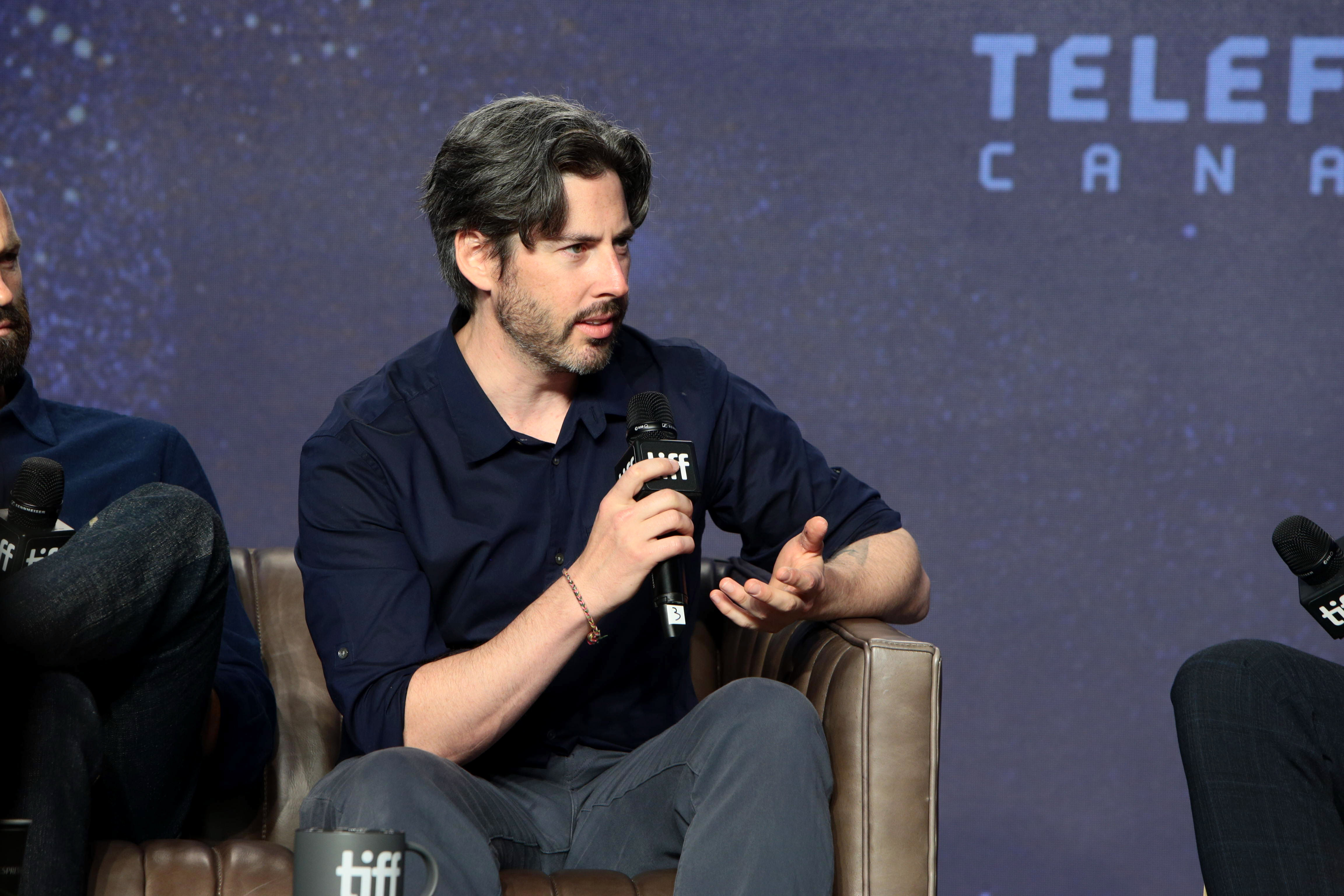 While today’s media is dominated by 24-hour news cycles, where political and tabloid news now frequently overlap, “The Front Runner” offers an authentic look at a moment in time where the face of political journalism was beginning to evolve in the midst of the Hart scandal. “This was the first film in which my job as a writer was not to figure out what happens next, but rather why it happens or how it happens,” said Reitman.

Bai mentioned that he finds a lot of art in politics (films, books, etc.) today to be message-driven, but he insisted that was never the goal in making this film. “It takes some restraint in this environment, but we genuinely feel like these issues are complex. That everybody’s making incredibly difficult decisions in incredibly difficult circumstances for the first time,” he commented. “It was one of our guiding principles. We’re not here to tell you what to take away, because we want you to have a conversation about [Hart] and debate about it.”

The writer did notice, however, that audiences unfamiliar with Hart’s story have seemed grateful “to hear something new about politics that they can process and consider.”

“Every political story we hear seems to be some version of the same thing over and over, no matter which side you’re on,” said Bai. “I think people are looking for ways to make sense of the world we’re in, and I think there’s a genuine sense of gratitude at being able to consider an entirely new episode that people hadn’t chewed over so much before.”

“The Front Runner” opens in San Francisco on Friday, Nov. 16.