Thrill seekers, adrenaline junkies, daredevils—Alex Honnold and other professional climbers of his caliber have heard these same generalizations time and time again. Sure, there is some badassery about climbing the world’s biggest walls. But in the documentary film “Free Solo” which sees Honnold through his most significant accomplishment yet, scaling the 3,200-foot monolith face of El Capitan in Yosemite National Park without ropes or any safety system, climbing isn’t about cheating death; Rather, it is about living beyond fear.

Following Honnold over the course of two years, as he prepared for this climb, “Free Solo” directors Jimmy Chin and Elizabeth Chai Vasarhelyi and their camera crew masterfully captured Honnold’s ascent from above, below and up close. As promised, visually-stunning scenes of Honnold crawling through the multi-pitch route garners sweaty palms as his fingertips press against holds and his feet toe into flakes of glassy granite thousands of feet above the ground. One wrong move and he’s done—but Honnold cruises with such meticulous perfection and poise, he can’t be anything but part superhero, part peak human anomaly.

“I dreamt of soloing El Cap for years,” Honnold said on a recent press stop in San Francisco. At 33-years-old, he has conquered other nine other solo projects before El Cap, including Moonlight Buttress in Zion and the Regular Northwest Face of Half Dome, both in 2008. “I realized I had to put in the work and get it done … I was like, I want to do this at some point in my life, I better find out sooner than later.” 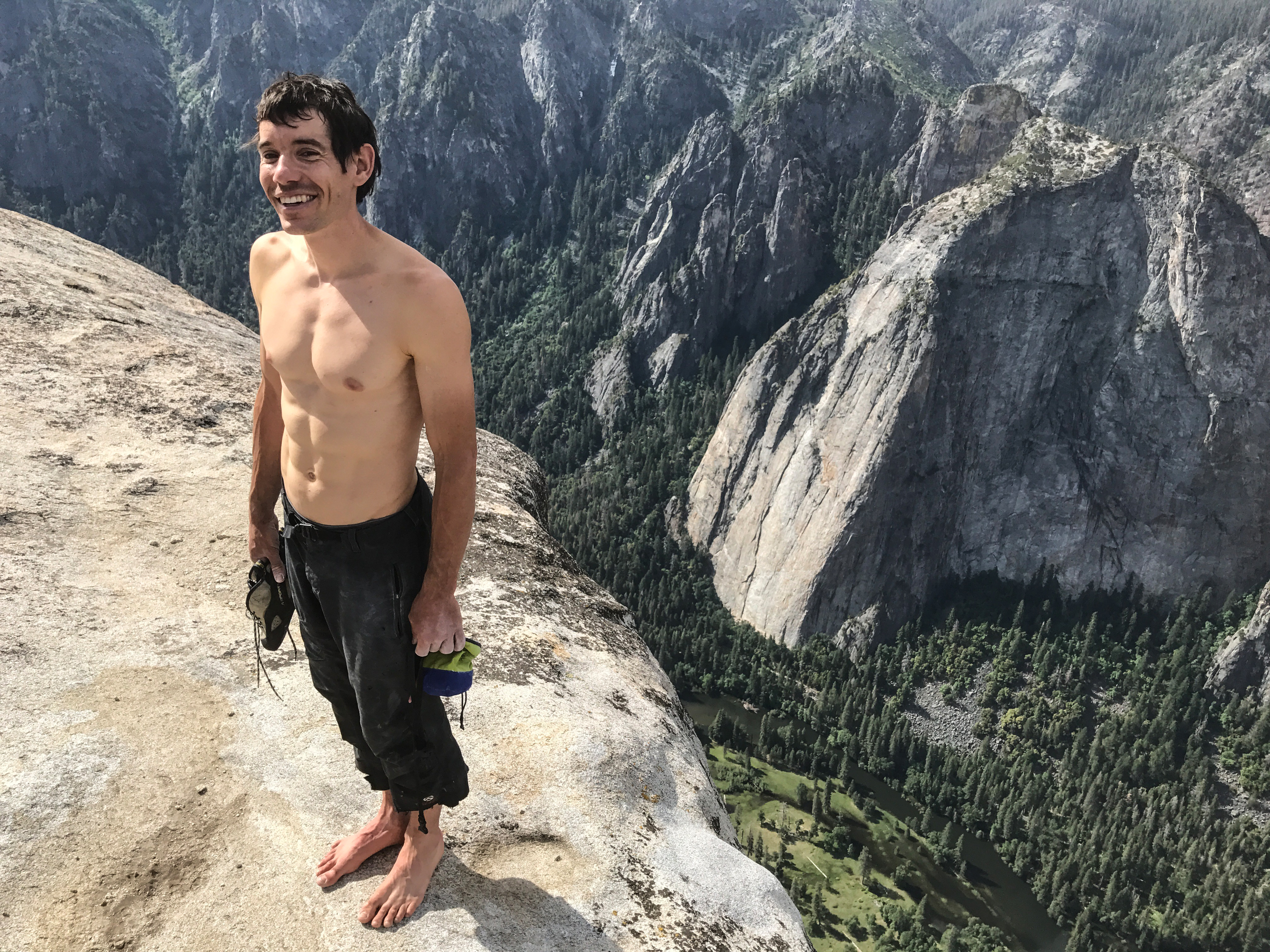 Alex Honnold holds all of his climbing gear atop the summit of El Capitan. He just became the first person to climb El Capitan without a rope. (National Geographic/Jimmy Chin)

Adventure films, particularly climbing films, tend to follow a specific narrative formula. Nuggets of the subject’s biography, their preparation, and anguish of obsessing and overcoming their projects are woven in throughout footage of the actual climb. For “Free Solo,” however, the sheer magnitude of the danger and risk baked into Honnold’s project naturally led the filmmakers to explore even bigger questions: Risking life for sport, fear and how it manifests, but also the consideration of how his choices and the potential ramifications impact those he leaves behind should he fail. Honnold now has a girlfriend, Sanni McCandless, who becomes the emotional core of the film. She is faced with blatant acceptance of his desire and need to do this, but where does that leave her? The night before Honnold steps onto El Cap, the consequences can be too much to bear as she cries, “What if something happens? What if I never see him again?”

That possibility is something burdened onto the film’s creators as well. In one scene, Honnold and Tommy Caldwell, another accomplished professional climber, process their friends who have perished while “Free Solo”-ing; Honnold receives the news of Ueli Steck’s death on screen, in real time and is un-phased. Honnold may be comfortable with his own death, but before committing to the film Chin and Vasarhelyi had to ask themselves the ethics of turning the project into a documentary in the first place.

Chin outlines the enormous external pressure having a film crew present while Honnold attempts El Cap: a lens cap could fall, a rope could get in the way, “Kodak courage,” where people do something they usually wouldn’t because they’re being filmed. Trust, in every manner it could be present, needed to be omnipresent.

Jimmy Chin and Chai Vasarhelyi on location during the filming of “Free Solo.” (National Geographic/Chris Figenshau)

“The hard question was do we trust Alex to make the right decisions, are we willing to carry this kind of a burden for this film?” Chin added. “The other big question wasn’t just do we trust in Alex but do we believe in Alex? That was probably the big leap for me in one way, but because I also had seen him climb and see how he approaches his projects, I did believe he had the capacity to do it.”

Walking into “Free Solo,” some of the queasiness is lifted knowing Honnold achieves his dream, triumphant and grinning as he climbs over the top of Yosemite’s grandest wall. It is admirable to see exactly how high human beings can (literally) climb with willful and intentional practice, obsessive study and calculated approach to the task at hand. It’s is also charming on Honnold’s part, that he doesn’t take the rest of the day off—he’s going to hangboard later in the day; perfection never rests.

“I see life as probabilities and chance and reality,” Honnold explained. “I think that the desire to do my best in climbing does stem in part from knowing that I’ll only be here for a certain amount of time.”

“Free Solo” as a film, and Honnold as a human being is a marvel beholden to its aspirational quality, as Vasarhelyi summarized, “If he can do this with his fear, what can I do with mine?”