“Bad Times at the El Royale,” director Drew Goddard’s newest motion picture, is an irreverent crime drama that places the audience in the secretive world of the El Royale. Once a prosperous roadside hotel and watering hole for the political and entertainment elite, now a pit stop for those calling it quits on the California dream, there’s a lot going on beneath its veneer of kitschy roadside glamour.

The movie starts with four strangers checking in at the front desk. There’s Father Daniel Flynn (Jeff Bridges), a priest returning to his parish after visiting his brother in Oakland (or so he says), and Darlene Sweet (Cynthia Erivo), a girl group singer ditching the cutthroat Los Angeles record industry for a stable club gig in Reno. Then there’s Laramie Seymour Sullivan (Jon Hamm), totally just a charming traveling vacuum salesman, and Emily Summerspring, a mysterious not-to-be-messed-with stranger fleeing the darker side of the Golden State’s burgeoning counterculture. All of them are checked in with the El Royale’s sole employee Miles Miller (Lewis Pullman), who seems like a bellboy who had to take over the motel on his first day. 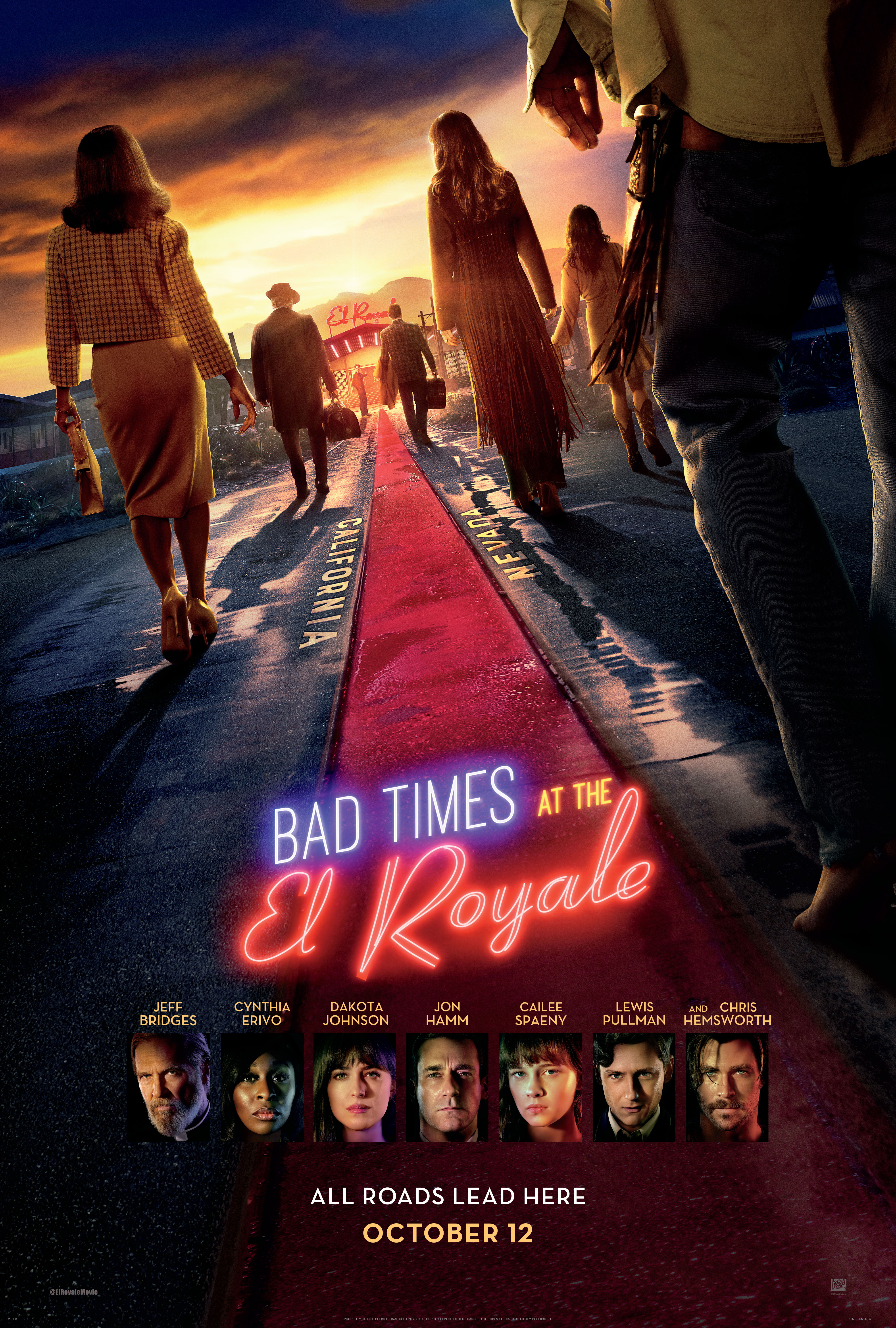 The story unfolds over the course of one night, during which the hotel’s, along with each of the characters’, darkest secrets are violently exposed. The movie revolves around their conversations, sometimes thin but always peeling away at a character’s façade, and a collision of all their individual misfortune.

The Lake Tahoe roadside motel is split by the California-Nevada border, with differing aesthetics, prices (“You got a phone number for any of those [California] people, because I’d sure like to sell them one of these vacuum cleaners,” Sullivan quips.), and drinking laws depending on which side of the hotel you’re standing or staying in. The nervous and exceedingly green Miller presents patrons with a choice: stay in “warmth and sunshine to the west” or opt for “hope and opportunity to the east.” In consideration of cost, all the guests choose the latter option.

Presumably shot in between filming episodes of Netflix original series “Daredevil,” this period piece is Goddard’s most glamorous film to date, even if the El Royale’s allure is the vapors of its past glory. Even then, the attention to detail in the set design is definitely a highlight. The movie was shot “anamorphic,” or basically “very low and wide,” bringing the floors and ceilings into sharper focus. To account for this, Goddard said, per the film’s production notes, that he “wanted to have every surface in frame visible and visually interesting.”

The film maintains Goddard’s trademark action-packed unpredictability, seen in “Cloverfield” and “Cabin in the Woods,” while keeping with the latter’s sense of humor and mind-bending behind-the-scenes surveillance. In both films, everyone is being watched, everyone is laid bare.

“Bad Times at the El Royale” is a thrilling and skillful execution of many ideas at once that exudes an endearing old-school warmth that doesn’t dip too deep into nostalgia. The film’s version of the late 1950s is coated with malice rather than sugar, and it’s stimulating tale of intrigue and suspense delivers without taking itself too seriously.

“Bad Times at the El Royale” is now playing in theaters.

The Rewards of Fierce Determination