When people tell you to shoot for the moon, they might not expect you to land on an eight-story-high row of scaffolding overlooking a magnificent view of San Francisco. However, for the Academy of Art University students who spent this past spring painting a stunning new mural across the front of the Cova Hotel, it was a dream come true. 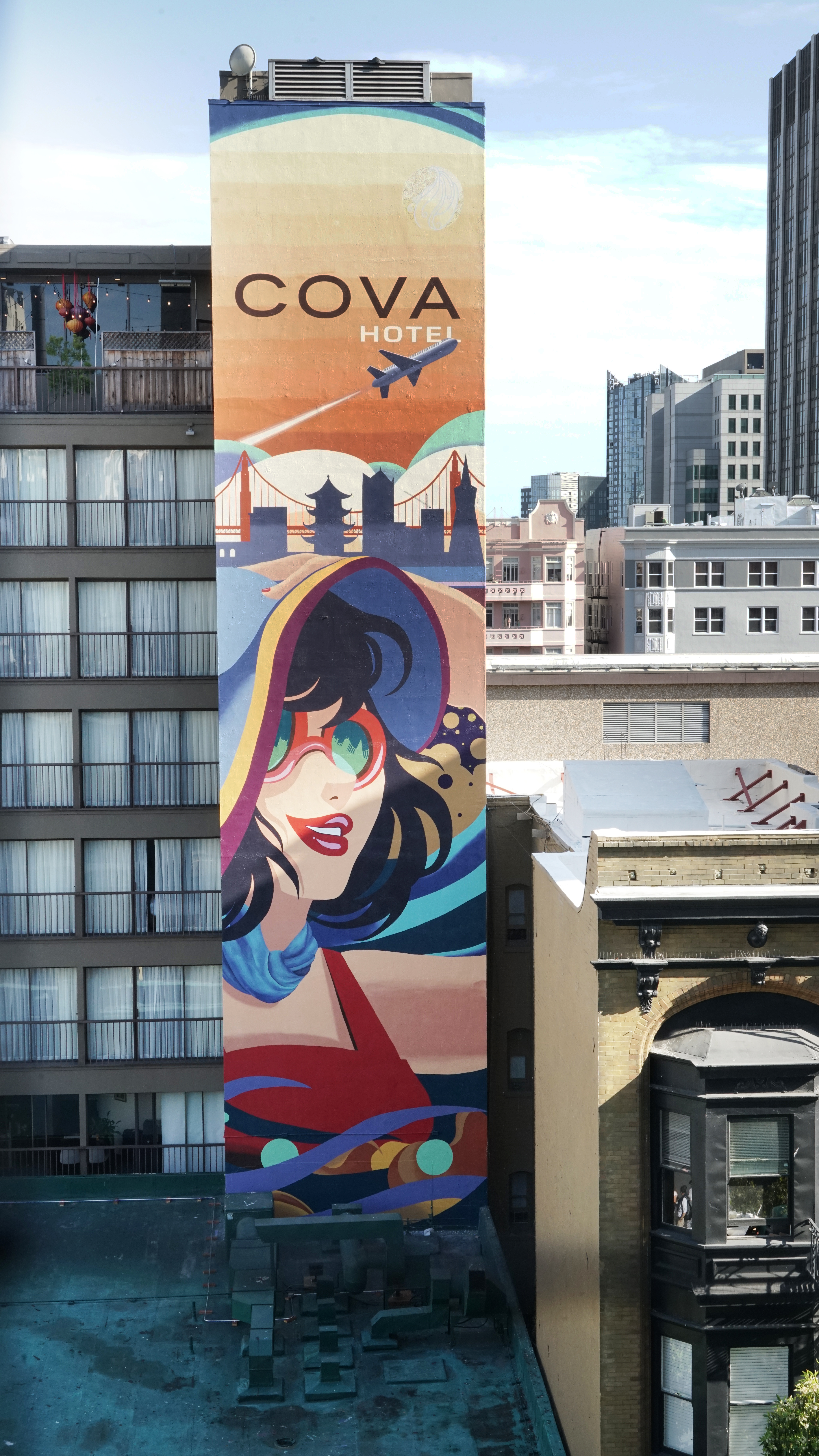 The theme of the mural is “city life, and how fun it is to be in San Francisco as an international tourist,” Nunnelly explained, as well as “aviation and travel in the era of the 1960s.” It depicts a savvy, vibrantly painted young tourist arriving in San Francisco, with a silhouetted skyline of local landmarks like the Ferry Building and Transamerica Pyramid painted in the background. An airplane takes off over the orange façade of the Golden Gate Bridge into a radiant “sunrise or sunset, depending on how you look at it,” according to Alterman.

The mural was designed by Lulu Lin, who received her M.F.A. in illustration this past spring. Her artwork was chosen by Simon Sin, the owner of Cova Hotel. According to Nunnelly, “He loves her clean graphic designs with an Art Deco flavor,” and also commissioned Lin’s artwork at the Academy’s last mural project at the Samesun Hostel.

The Academy’s fruitful relationship with Sin serves as a model for the mural painting students in their blossoming careers. According to former Vice President of Community & Government Relations Rebecca Delgado Rottman, an essential part of exposing your art to a wide audience is “building relationships—relationships based on trust, over time.” Rottman, who retired last month after 26 and a half years at the Academy, played an important part in securing both the Cova Hotel and Samesun Hostel mural projects.

“Murals tell a story. These stories are about the neighborhood the mural is located in and is a way for students to give back and use their skills,” Rottman said while delivering a speech at the mural’s dedication ceremony.

“[The students] have heart and are not getting paid, so the work they do is a way for them to learn the business of art production on a team and to get a portfolio in large scale work.”

The businesslike tone of the class was meant to imitate a real mural-painting company, and that intention was not lost on the students. “It didn’t feel as much of a class as it did a small mural company, and our teacher was the boss,” McGrew recalled. She felt that the class was very hands-on and geared toward real-world business scenarios.

“She did teach us what the heck we were doing,” McGrew said, “How to go about marketing ourselves, and how you would work with clients and stuff like that.”

Nunnelly gained the necessary insight for teaching the class from her experience as a mural painter. She worked for prominent San Francisco interior painters Evans & Brown before starting her own mural-painting company. In her professional career, Nunnelly has “painted maybe 20 murals all around the city,” so when Craig Nelson, executive director of painting and printmaking, wanted to start a class dedicated to the craft, he knew exactly who to call.

“He wanted his students to graduate and go right out there and get jobs,” Nunnelly explained. “[The students] were so young and alive and vibrant. They were excited about the project, and they put a lot of themselves into it… It felt to me like a professional team, not really a student team.”