Film Review: “Sorry To Bother You”

“Sorry to Bother You,” the debut feature film from Oakland artist-activist Boots Riley, is set in alternative present-day, dystopian Oakland, when Cassius Green (played by Lakeith Stanfield) starts work at a telemarketing firm. Strapped for some green and a purpose, Cassius quickly rises in the ranks to power-caller status after a co-worker (played by Danny Glover) taps him into using his “white voice” (borrowed from David Cross and Patton Oswalt). He’s bumped into the airy offices upstairs as his fellow workers organize a protest contesting corporate oppression.

Despite the urgings of his friends (played by Steven Yeun, Jermaine Fowler and the scene-stealing Tessa Thompson as Cassius’ girlfriend Detroit), Cassius continues on with his success: His power-caller mentor played by Omari Hardwick introduces him to the company’s maniacal CEO, Steve Lift (played by Armie Hammer), and Cassius falls further beneath the spell of power and prominence. His material problems are solved, no doubt, but he’s starting to lose more in the process.

A surrealist comedy on rising up and selling out saddles the contradictions of wokeness with wealth, while maintaining its playful, silly edge. But Riley continues to raise the stakes. A nightmarish discovery at a party thrown by Lift pushes Cassius to realize that he’s just another cog in the enterprise wheel, to lead the cavalry against more than the injustice of low wages. 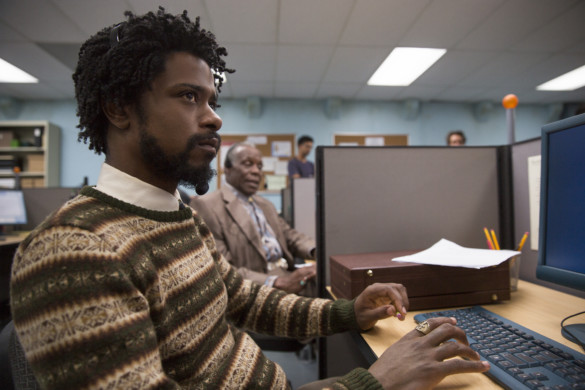 (l to r.) Lakeith Stanfield as Cassius Green and Danny Glover as Langston star in Boots Riley's SORRY TO BOTHER YOU, an Annapurna Pictures release. 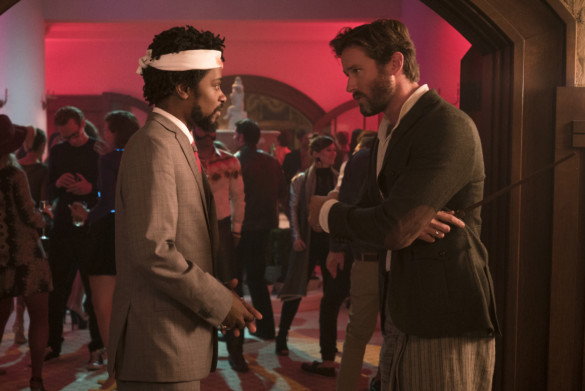 (l to r.) Lakeith Stanfield as Cassius Green and Armie Hammer as Steve Lift star in Boots Riley's SORRY TO BOTHER YOU, an Annapurna Pictures release. 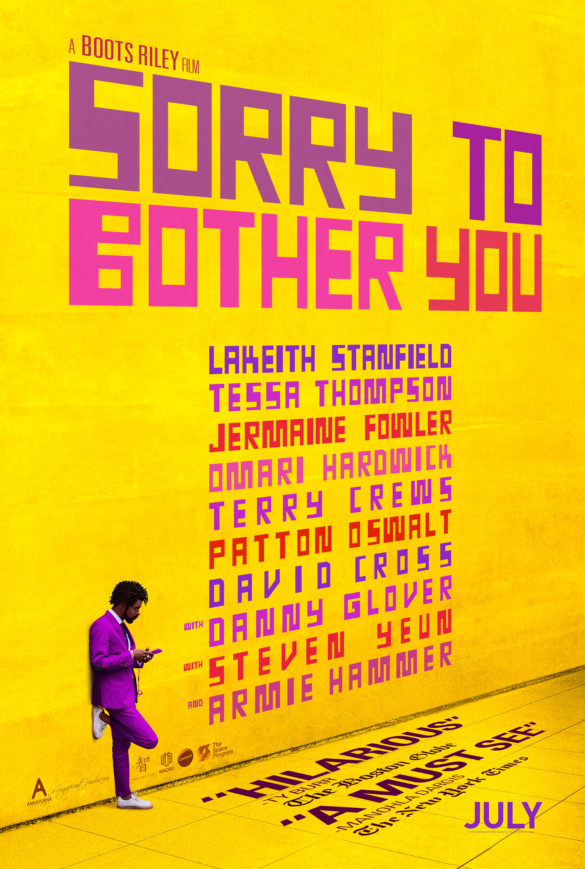 On its face, “Sorry to Bother You” is a trip. Among all the chaos, frenetic energy and obscenities unloading from Riley’s socialist satire, there’s real cause for reflection on how we move along in this capitalist-driven world. Cassius sees that the reward of ambition is (economic) freedom, but at what cost to his spirit?

As another entry into Riley’s political art portfolio, “Sorry to Bother You” is recognizable in the ways the director presents his heavy-duty ideas amid a funky and free-wheeling ruckus. But with such layered complexities packed into the core of an hour and 45 minutes, the film would be stunted without its ascending cast of actors.

Stanfield as Cassius is the laid back-but-lost striver looking for his break; Thompson’s Detroit is a fiery artist revolutionary that keeps the story moving and grounded. Glover as Langston, while a smaller role, offers his wisdom. Hammer is “Sorry to Bother You’s” baddie, however, there’s villainy hidden elsewhere as well: Steven Yeun’s character Squeeze teeters between righteous unionizer to antagonist.

But the most obvious character in “Sorry to Bother You” is the city of Oakland itself. To audiences in theaters across the country, Riley, born-and-bred in the Town, reveals Oakland as he knows it: Colorful, yet gritty, consistently contested, but constantly resilient. For added kicks, Bay Area rappers Mistah F.A.B. and Lyrics Born have cameos and local graffiti artist J. Otto Seibold created the font used in the title card and Detroit’s supersized earrings. Riley has always put his community at the front of his art and it appears this time, it rose to meet him.

“Sorry to Bother You” fits neatly within Riley’s catalog of activism via art, but it also feels like a homecoming celebration dedicated to Oakland, a city rife with political, social, economic and now, perhaps, technological history. The film might be an exaggeration of where the world is headed, but if Riley has anything to say about it, he has the guillotine.

Preparing for the Industry