“Raise Hell: The Life and Times of Molly Ivins” is a Call to Action

“I’ve come to cheer y’all up about the state of politics in this great nation, and I know you are in need of cheer, and I know you think it’s looking dark and gloomy,” Ivins says in the opening clip. “Cheer up, it could always be worse; you could be living in Texas.”

“Raise Hell: The Life and Times of Molly Ivins,” which opens in San Francisco this weekend, traces Ivins’ roots growing up in Texas, her formal education, and details her audacious journalistic career through those who knew her best, from her siblings to her closest friends and various colleagues from over the years. 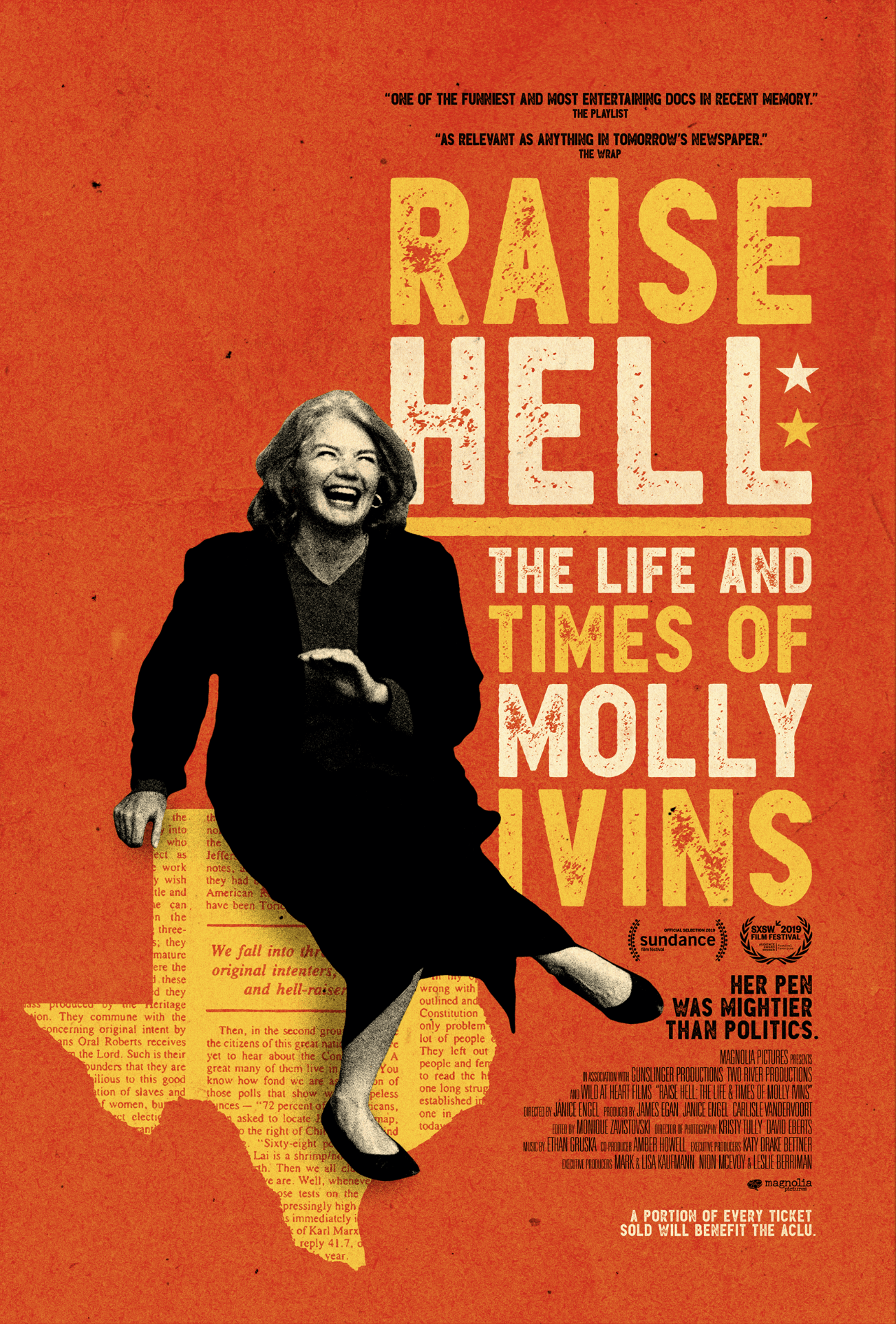 “Molly spoke truth to power and she gave a voice to those who didn’t have one, but she used humor to bridge the divide,” Engel explained during a phone interview. “Jim Hightower, who’s in the film, said at one point to me, ‘Molly knew that humor was the door key to the brain. You’ve got to unlock that little door to get people to actually listen to you.’”

And boy, did she ever wield her humor. Taking aim at both sides of the political aisle (former President Bill Clinton was one such critical target and as was former President George W. Bush, whom Ivins dubbed  “Shrub”), the renowned truth-teller’s life story makes for one heck of a movie and is an absolute must-see. (And frankly should be required viewing for all budding journalists.) Ivins firmly believed in shining a light on elected officials so the public knew exactly who they elected to office and spoke out years ago about the political system being in need of a serious overhaul.

“We need to fix this system, so when people get elected to public office, they have no one to dance with but us,” she states in one interview clip, “because we’re the people that [brought] them to the show.”

Engel, an award-winning filmmaker and showrunner with a resume that includes “Jackson Browne: Going Home,” “Ted Hawkins: Amazing Grace,” and “Behind the Music: Shania Twain,”  first encountered Ivins’ story back in 2012 via a tip from her friend, former School of Motion Pictures & Television (MPT) Executive Director James Egan, to go see a play, “Red Hot Patriot: The Kick-Ass Wit of Molly Ivins,” written by sisters Margaret and Allison Engel and starring actress Kathleen Turner as Ivins. Egan and Engel had been looking for a project to do together, so Engel went.  “The play was a laugh a minute because it was Molly,” she said. “Kathleen was great, but it was who Molly Ivins was.”

That night after the play, Engel came home and proceeded to look up Ivins online into the wee hours of the morning. “I went down the wormhole of not only how funny Molly was, but how brilliant she was,” she said.

The next morning Egan, one of the film’s eventual producers, revealed that he learned from Turner that outside of the play, nothing had been made about Ivins. They connected with Ivins’ “Chief of Stuff” Betsy Moon, and three weeks later they received the go-ahead from Ivins’ estate, which had been left to both the ACLU and the Texas Observer.

“Once we got the green light from Betsy, we got access to Molly’s friends and people that loved her and knew her as well as a few famous journalists and politicians,” said Engel.

In total, Engel amassed around 40-45 interviews during the making of “Raise Hell.” While access is key, especially when doing a film about somebody’s life, she emphasized that “you need to really do the deep dive dig.”

“I tell this to my students: you’ve got to be prepared, dig in. You can’t be superficial,” explained Engel, who teaches documentary filmmaking, production hub and editing for MPT. “Whenever you’re doing a creative project, you’ve got to dig in. If you don’t go deep, you don’t get the goods. So for six and a half years, I climbed a mountain called Molly, and it’s been incredibly rewarding. But part of that was trying to find the money, trying to find out what the story is.”

Getting the money to make the film and pay her team along with figuring out the actual structure of the film were two of the biggest challenges Engel faced throughout production. Between the three producers—Engel, Egan, and Carlisle Vandervoort—they collectively put up $10,000 via their credit cards. The rest came through fundraising gatherings in Houston, Texas, Washington, D.C., and Los Angeles, but it wasn’t until the film’s very successful Kickstarter campaign that was launched in 2015 that they really hit their stride. Their campaign surpassed the initial goal of $75,000 in the first 10 days and went on to raise over $120,000.

Figuring out the structure of the film left Engel tossing and turning. When seeking funding, she was told that the issue was “it’s a biopic and she’s dead.”

It was during a lunch meeting with “documentary editor extraordinaire” Kate Amend in January 2018 that parted the clouds hanging over the director. According to Engel, after explaining the problem to Amend, the editor responded, “Janice, what’s wrong with a biopic?”

“It was like the first person who had actually said that to me in three years. … It was like she unleashed me from myself,” said Engel. “And I said, ‘Nothing.’”

Engel wrote out the proposed structure on a flight the next day and noticed it looked very familiar. When working on projects, she creates index cards that contain the structure, pins them to a cork board, and takes pictures of them. When she revisited the photos of the cards she first created for the film, it was almost exactly the same, with exception of the newer content she had added in from interviews and video clips she uncovered of Ivins.

“And that is the film you see today,” said Engel. “So my lesson, my teaching to my students when I tell them the story is first thought, best thought. It’s a process and I had to go through that process.”

“Raise Hell” made its world premiere at the 2019 Sundance Film Festival, won the Audience Award at SXSW and went onto screen at a number of film festivals, including the 2019 Full Frame Documentary Festival, and the 2019 San Francisco International Film Festival. The film currently has 97 percent on Rotten Tomatoes with a 100 percent audience score.

Before Ivins passed in 2007, at the age of 62, after an ongoing bout with cancer, she had continued to defend the Bill of Rights, especially during the second Bush administration, and donated a lecture a month to the First Amendment to ACLU chapters.

With “Raise Hell,” Engel showcased both Ivins’ life and impressive career as well as created an inspiring tribute to a journalistic leader that unabashedly spoke her mind on and to political leaders and the issues that continue to affect the country.

“We talk about Molly, how prescient she was. Everything she wrote and she said 15, 20, 30 years ago, it’s happening right now,” said Engel. “She was a student of history and she knew history repeats itself. The difference is that the cycles are getting shorter, because [we] live in an age where it’s not even 24/7, it is every 30 seconds. Everything’s speeding up, the cycles are happening faster and faster. [Molly] is very relevant right now. It’s unbelievable that what she said is happening now. And that’s why the film being released right now couldn’t be better timing: a call to action before the next election. … It’s ‘We the People,’ people—it’s up to us to do the heavy lifting.”

“Raise Hell: The Life and Times of Molly Ivins” is now playing in San Francisco.

Exhibitions “Inception” and “Growing Up” on Display at Sutter St. Galleries