With a spirited cast, the School of Acting production brings a lift to the end of spring with “In the Heights”

As stage lighting evoked a summer sunrise and salsa sputtered from a radio, San Francisco’s trademark fog seemed to fizzle in a snap. Replacing it: the languid stickiness of a New York City heat wave, gripping a packed urban block. In the heart of the barrio, longtime residents rumbled awake in a flurry of activity. As the eponymous opening number to “In the Heights” cranked to life, charismatic main character Usnavi—played with zeal and Lin-Manuel Miranda-esque locution by Daniel Cancel—introduced them and their diverse world.

Since these opening moments, a sizzling energy and palpable connection among cast members were the twin pillars of the spring-semester production, presented by the Academy of Art University’s School of Acting (ACT) and directed by Academy instructor Clark Houston Lewis.

Capturing Washington Heights, the production operated with a practiced rhythm. Actors moved naturally; their characters felt cut from the same cloth as their setting. All around, Heights residents went through their motions. Usnavi, who yearns to leave, opened his bodega and greeted Abuela Claudia, portrayed with heart and lung power by Tiffani Williams. Across the way, the Rosario family-owned taxi service got to work, as usual. At the salon, bold Daniela (an amusing Renee Rogoff) and Carla (a comedic Zoe Foulks) drew laughs while Usnavi’s love interest Vanessa (a sweet-voiced Zoe Hodge) dreamt of something more. 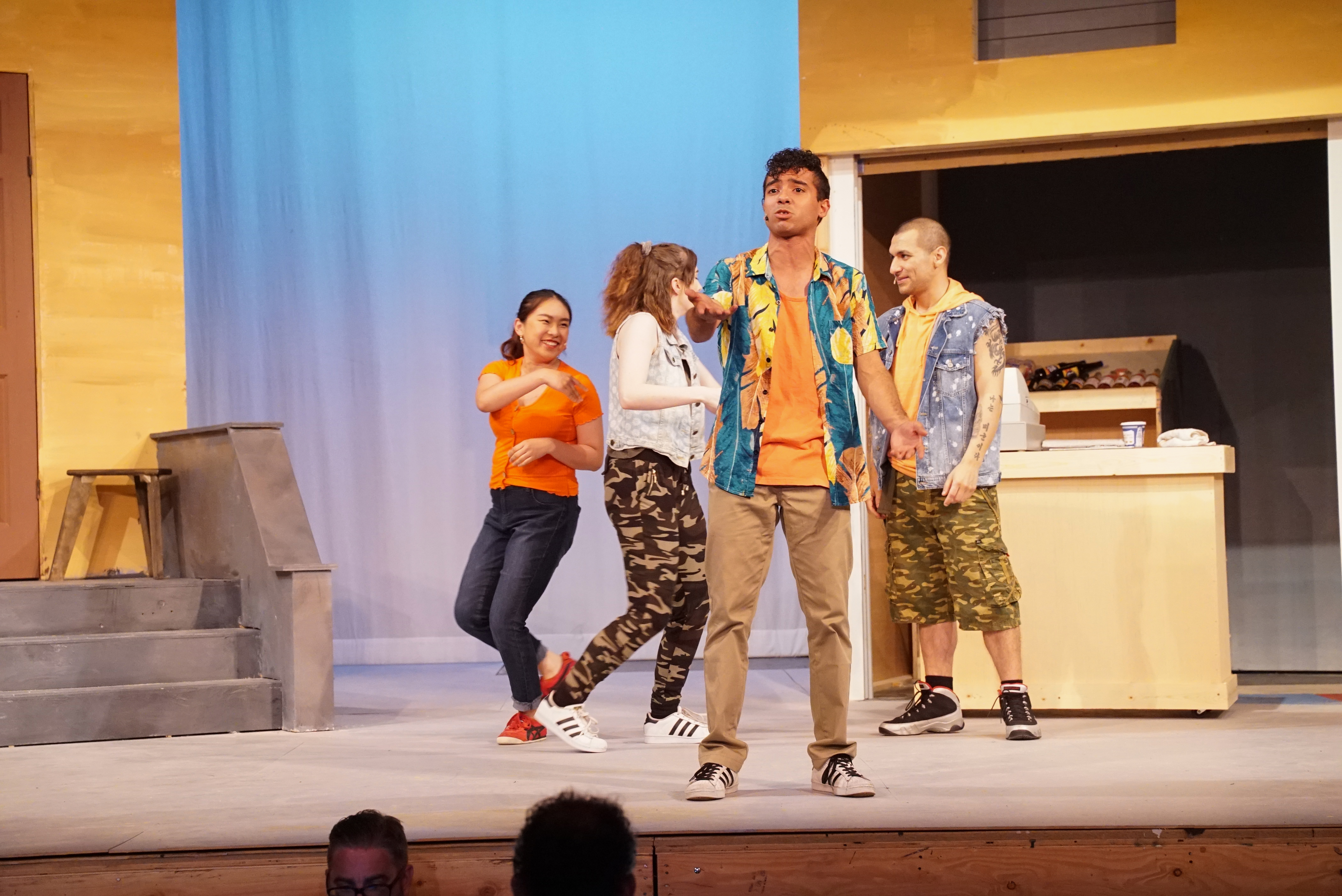 There’s also the delightfully blithe, spasmodic appearances of Mister Softee’s nemesis, the Piragua Man. Played by Chris Famaw, he floated onstage with the air of a gentle smile that’s somehow found a way to operate a small business.

Throughout the three-day storyline, they all connect, bemoan their lots in life, share dreams, admire their neighborhood, and support each other. Yet, circumstances are atypical—a heat wave swells and July 4th celebrations loom.

The production conjured the same liveliness that brought the original Broadway one fame in 2008. It played out well in San Francisco. The Tony-winning “In the Heights,” written by Quiara Alegría Hudes and music and lyrics by, of course, Miranda, might have captured a faraway city from a decade ago. But, it hit home in today’s Bay Area, which has seen its own crises of gentrification, racism and financial strife. A line from Usnavi might as well have been uttered by a SoMa shop owner in the shadow of a rising condo complex: “In five years when this whole city’s rich folks and hipsters, who’s gonna miss this raggedy little business?” 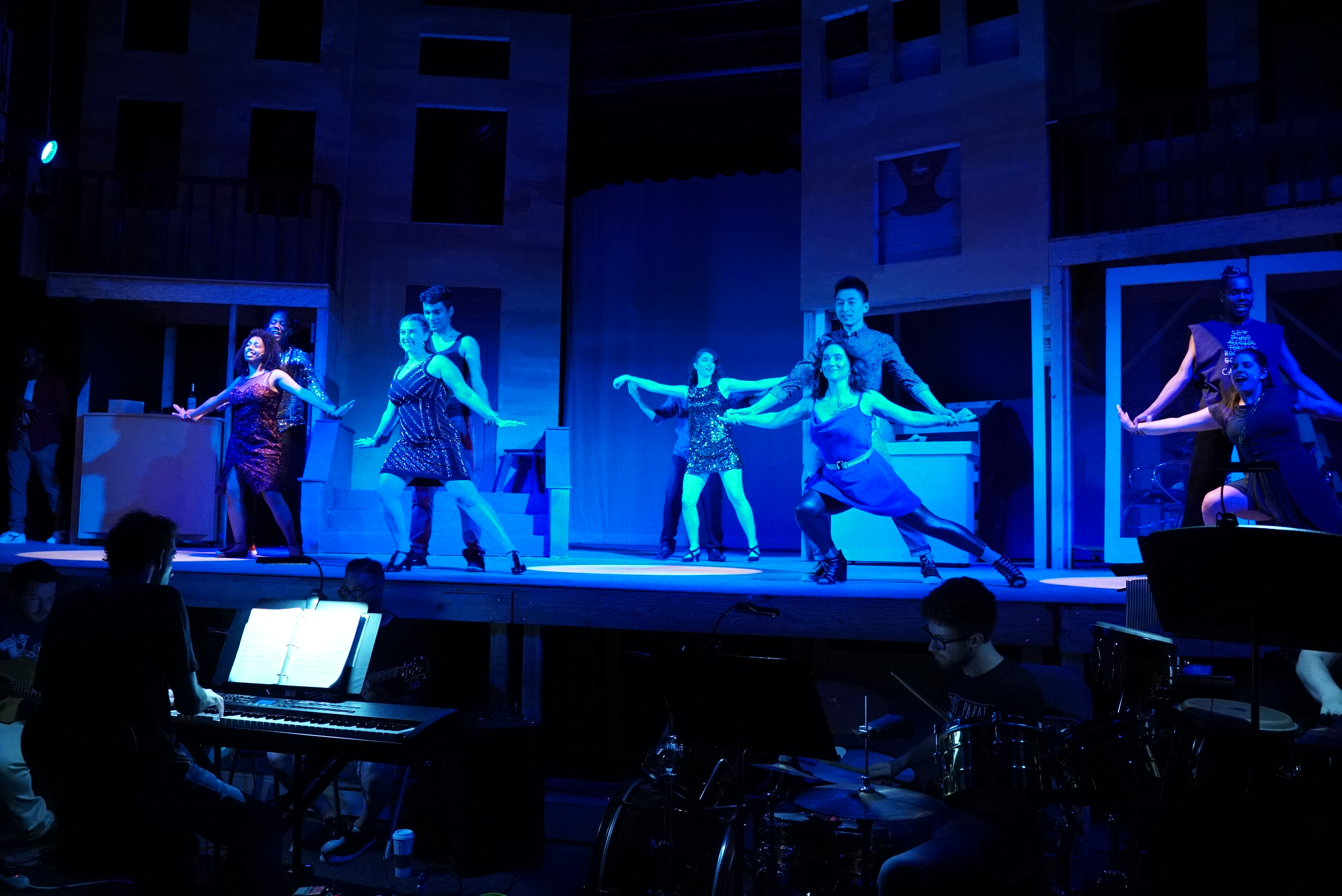 Still, there was no denying this was Washington—not Bernal—Heights. The cast’s ebb and flow had New York character—crystalized in a transporting set designed by Alf Pollard and helped along by tight-knit, Latin-and hip-hop-informed choreography by Alexandra Cummins. Before the dramatic blackout in the first act, a vitalizing dance number seemed so much a summer block party that it wouldn’t have been surprising if audience members jumped onstage. This cast was living their best life, even though their characters were only dreaming of it.

Helping along that gusto was an eight-piece live band helmed by keyboardist and conductor Lucas Sherman. Often, it bolstered the production’s high energy. Percussionist Erica Dori, who juggled myriad instruments like an octopus with good timing, mirrored the multitalented ways of those onstage.

One scene in the first act, however, jerked us back down to Earth, the larger ecosystem of the barrio dissolved. It presented the actors’ knack for capturing the musical’s more poignant, weightier themes. In a stress-inducing intimate scene, central character Nina Rosario—the barrio’s pride for getting out and attending Stanford—confesses. She informs her parents, who’ve been toiling to support her, that she’s dropped out. The mood was tense. The actors snapped in a quick, strained exchange. Stern, controlling father Kevin (Zaya Kolia) and dignified mother Camila (Brenna Youngquist) steamed with believable concern and disappointment. 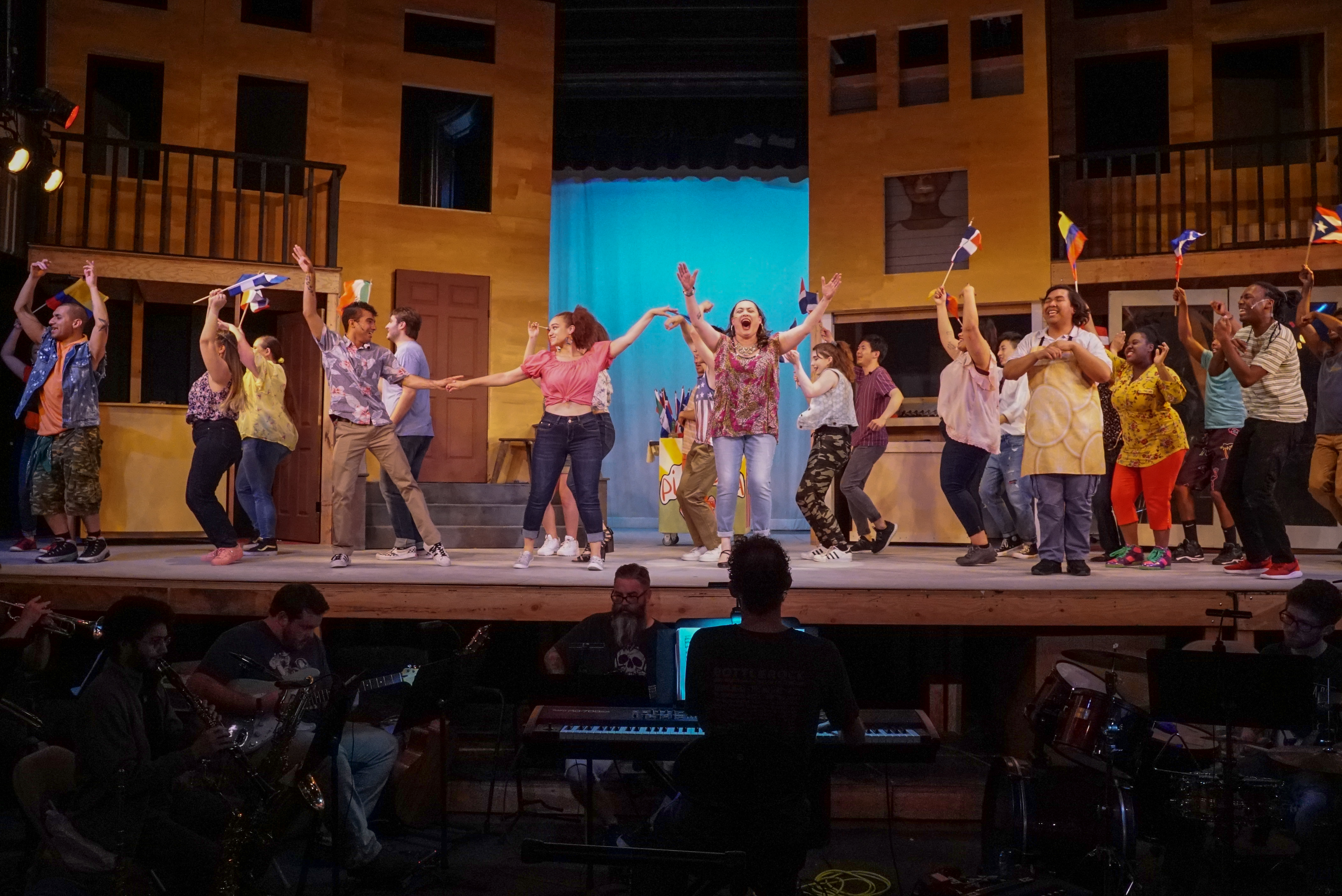 To stoke fires further, Nina (a warm Allison Frank) fell in love with Benny, a taxi employee dreaming of entrepreneurial glory, played by a grounded Michael Houston. Chemistry infused their courtship, which, peppered with Spanish lessons and tenderness, irked her father and fastened to themes of struggle and sacrifice. It leaned into the musical’s most interesting conflicts, on parents wanting a better life for the next generation and their children’s ever-present obligation, especially among immigrants, to do them proud.

Much of the cast balanced boisterous singing with dramatic acting. Another example was with the death of Abuela Claudia. It propelled characters forward: to accepting parents’ money, following dreams and, in the case of Usnavi, realizing he was home all along.