ClimART, a national exhibition of artwork addressing the issues of climate change, held its opening night on September 13 at Academy of Art University’s Cannery Gallery. The show was organized by the California Society of Printmakers (CSP), an international nonprofit based in the San Francisco Bay Area and the oldest printmaking organization in the nation. Entries were selected in a blind jury process by Gail Wright, Associate Professor at Stanford University.

In a written statement, Wright said, “The theme of climate change is close to my heart, and made for a particularly fascinating group of submissions.” She added, “From clarion warnings to optimistic solutions, and from deep reflection to poetic reverence, I was heartened by the sincere and expressly creative response to this call for work. In these particularly dire times, these wonderful works of art offer hope, awareness, and action.” Moms also seemed to be a recurring subject in this show about Mother Earth. 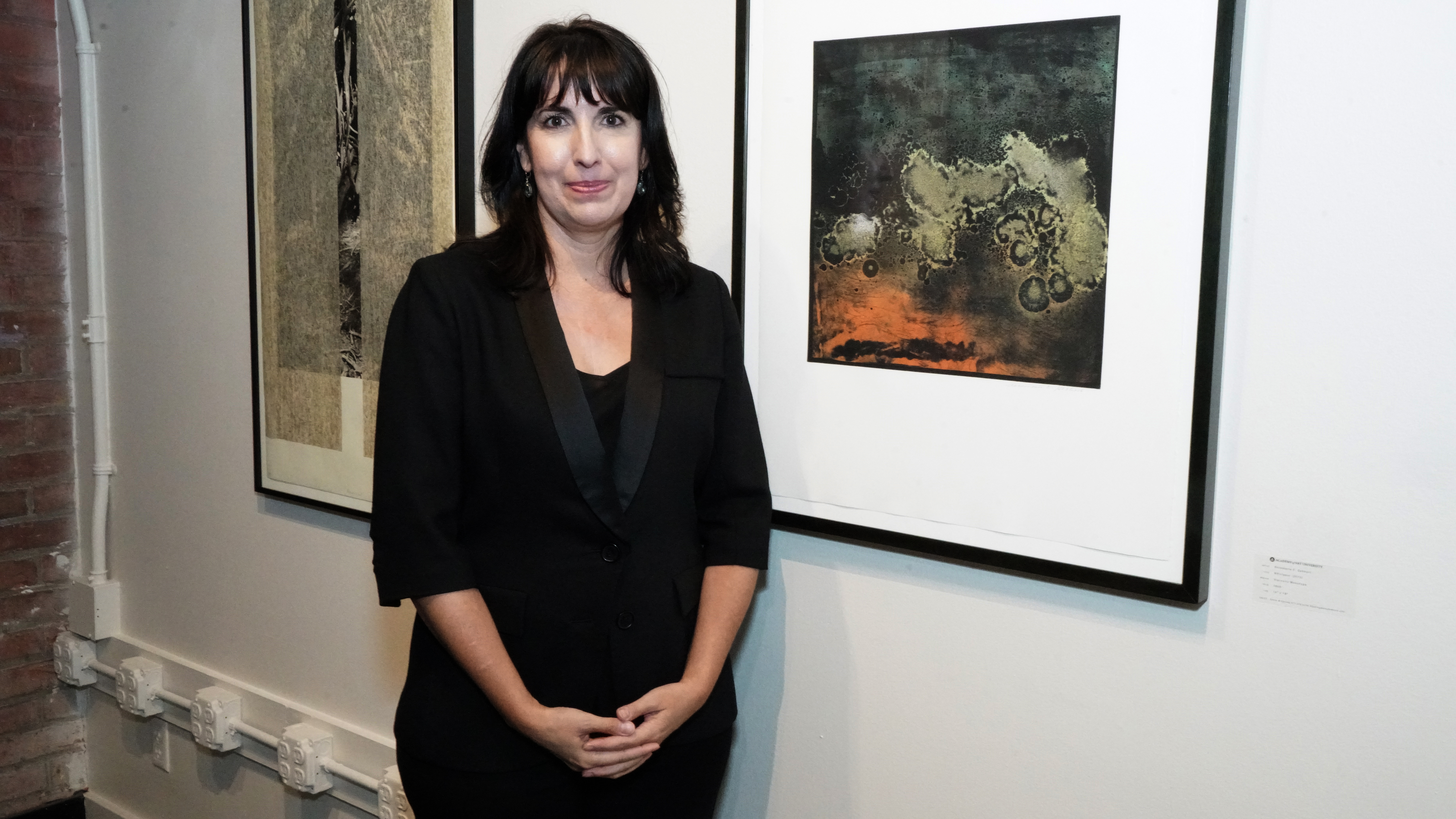 At the opening night reception, where the Michael Zilber Trio played cool jazz notes as gallery visitors took in the show, Joanna Kidd, CSP Exhibition Chair, said she was pleased by the diversity of artists. Altogether, 47 artists were selected for the exhibit, including artists from Montreal and from as far away as Denmark.

Kidd, who works in a number of artistic media, from sculpture to video and installation, referred to printmaking as her happy place. “When I’m in the studio, I feel good,” she said, recalling how her mom once worked as a studio tech at a printmaking studio in Davis, California, where she was born and raised. Her mom was more of a painter, but the gig provided her mother access to the press. “They share equipment because it’s so expensive,” Kidd said, adding that she loved this communal aspect of printmaking. She was seven years old when she joined her mom at the print studio and started making her own pieces.

Nicole McGrath was at the reception to celebrate her mother, Rosemarie Carrillo Gebhart, who had a piece in the show but wasn’t able to attend opening night. (She was tending to her ill husband at home.) McGrath said that her mother was raised in a traditional Mexican immigrant family. And while she had been able to attend college—she graduated with a nursing degree from Immaculate Heart College in Los Angeles in 1966—she’d only been allowed to go to the day school, typical of traditional Mexican households. Still, devoted to biology and the sciences, McGrath said her mother has always been concerned about ensuring that the natural world thrive, explaining how traditional Latino families are committed to the earth. Though she worked as a nurse, McGrath said her mother took art classes in Santa Barbara.

“Growing up with an artist mom,” McGrath said, “she made sure we excelled and encouraged the arts.” McGrath studied dance. Her sister took piano. “My mom raised us to be strong women with creative spirits,” a practice that she said helped “overcome hate and intolerance.” McGrath, who lives in Seattle, flew down to San Francisco for the exhibit’s opening night and admitted, “This might not be a quinceañera” but despite her mom’s absence it was still, she insisted, a debut of sorts. “Our moment to get together and celebrate,” she said.

Students and Faculty from Corporate-Sponsored Class to...