Drawing a Line Through Three Generations of Artists & Illustrators

Liz Amini-Holmes’ journey to becoming a professional illustrator included perseverance and the experimental, freeing style of her Academy classes

Liz Amini-Holmes, a professional illustrator and Academy of Art University alumna (illustration ’83), has a long history with the school. Her grandmother, Adrienne, took drawing classes in the ’30s, back in the school’s early days when it was first being established by founder Richard S. Stephens. And her mother, Ellen, a medical illustrator, took some of her early drawing and foundation classes at Academy of Art before transferring to UCSF School of Medicine, where she eventually graduated as the school’s first female medical illustrator.  “I grew up with scalpels and sketch pencils,” Amini-Holmes said, recalling that her mom would warn her, “Don’t stick your hand in there. You’re going to cut your finger.” Despite the tongue-in-cheek warning, Amini-Holmes did, ultimately, reach for those pencils to pursue a career as an illustrator.

As a teenager growing up in Woodside who loved sketching rock stars in her spare time, Amini-Holmes fantasized about moving to San Francisco, walking into one of the record companies that still existed at the time and getting hired as an in-house album artist. “I was that kid,” Amini-Holmes recalled. “Bell bottoms. Rock concerts in the city.” (Her first concert was Elton John at the Oakland Coliseum, tickets for which she’d won by calling into then radio station KFRC. She was 13.) Her grandmother would even tell her, “I wouldn’t be surprised if you married some rocker at 18 and became the queen of rock ‘n’ roll. I could see you living in England, in a castle with a recording studio.”

Fast forward to Amini-Holmes at 57, living in Woodside, on her grandmother’s old property where coyotes and wildcats still prowl, and where an artist’s studio sits out back. Last year, she worked on three picture books, including “Chester Nez and the Unbreakable Code Talkers,” written by Joseph Bruchac, and a picture book on revisionist fairy tales by U.K. anthropologist Ruth Finnegan, which is due out this month. Altogether, whether working in-house or independently, Amini-Holmes estimated that she’s been a professional illustrator for 35 years. 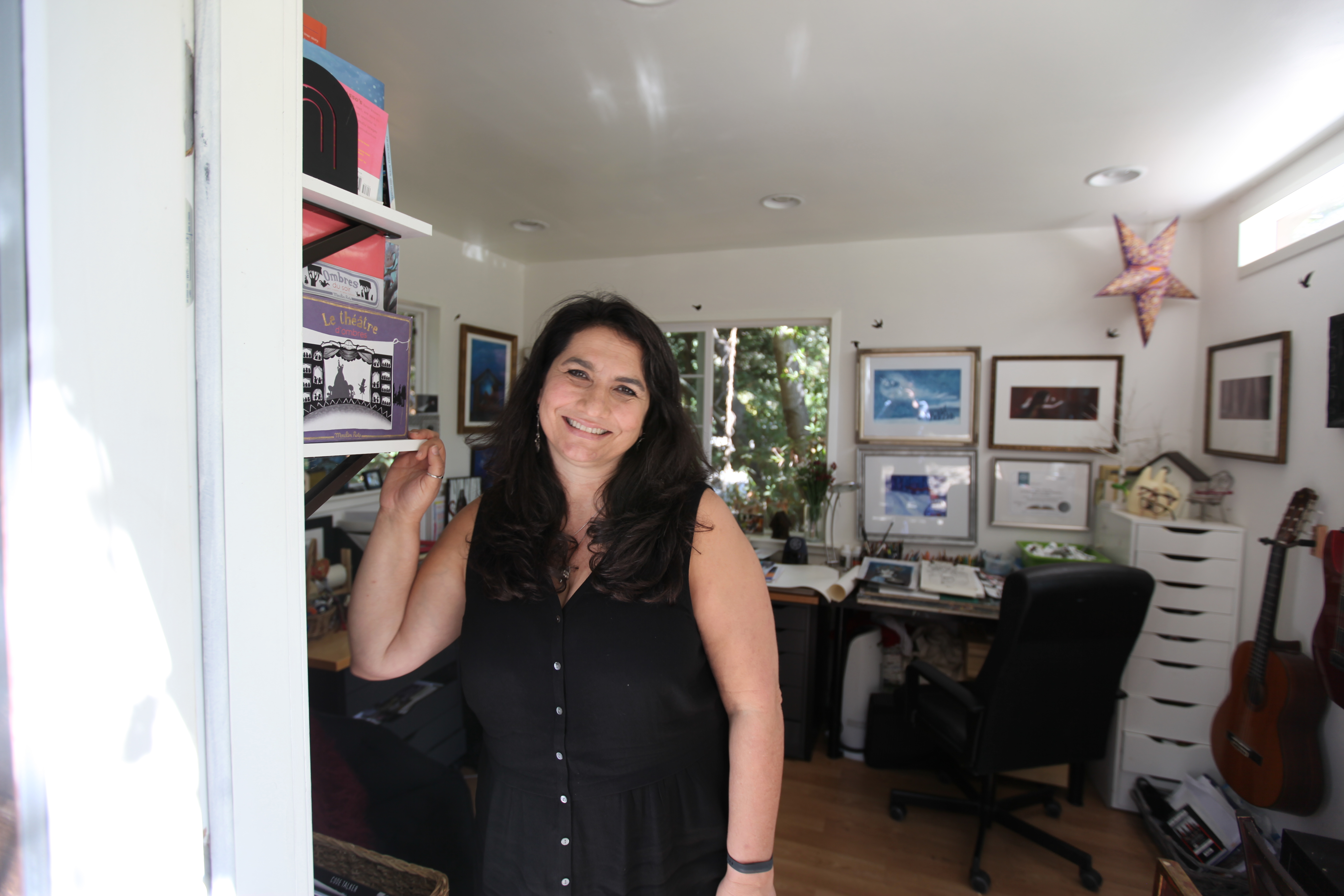 Liz Amini-Holmes, an alumna of Academy of Art University’s School of Illustration, stands in her artist’s studio in Woodside, California. Photo by Erasmo Guerra.

She started sketching and painting on her own in her teens. And though she credits her high school, Castilleja, a private all-girls school in Palo Alto, with having a great arts program, Amini-Holmes said she wanted to get to college sooner and so when she was a junior, she started attending Academy summer classes, before the school had even established its Pre-College Art Experience program.

As a senior, she continued at the Academy with a couple of foundation classes and then started the undergraduate School of Illustration program in the fall. At the time, her grandmother was ill and Amini-Holmes said she’d wanted to stay close to home. And, while she admitted that going to the Academy felt familiar and comfortable, she still struggled to fit in as an artist.

She described the Academy style at the time as “pretty” and “decorative.” Neither of which she felt. “I was from another planet,” she said. “Planet Liz.” She even flunked Illustration II. “It’s not that I wasn’t trying,” she said. “I was just trying to emulate a style that I didn’t have a real feel for.” Still, she was determined to get through the program—“I still want to do this,” she remembered telling herself. “I had an idea that it was going to work out.”

And it did. Around her junior year, she said new teachers began to teach at the Academy, like Barron Storey, whom she called an icon and the forefather of the modern graphic novel, as well as Academy alumni who returned to teach, artists such as Robert Hunt, Francis Livingston and Thomas Blackwell. “They were young—just a little older than us,” she recalled, and described how they would set up class and then blast music, openly encouraging everyone to experiment. Or, they’d tell you to take your artwork into the bathtub. Or stomp on it. “I was, like, okay. That sounds cool. It was freeing. You could come in with stuff that was more experimental.” It was a turning point. “I could start to become myself.”

“You’ve got to be in it for the long haul. Being an illustrator is amazing. But you still have to hustle.”

It’s a lesson she has carried into her professional life and which she imparts to her own students. (She taught a class at the Academy one summer that she called “Finding your Visual Voice.”) “You have to stay true to yourself,” she said. “Because who else are you going to be?”

She has also learned to take the long view about her work and the profession. “You’ve got to be in it for the long haul,” she said, looking at her own body of work as a way of continuing to add to and explore ideas. “Being an illustrator is amazing. But you still have to hustle,” she said. “You go from job to job to job.”

She met her husband, Mark C. Holmes, a fellow visual artist, at one of those jobs. They’ve been together 27 years, married 20. As someone who also believed in encouraging artists to rise above popular trends, emulating what everyone else was doing, she said her husband “gets it.”

But she got the artist’s studio, a bright, light-filled cottage just beyond the main house. “It’s my hut,” she said, and it’s where she goes when she’s deep in a project and needs to focus. This fall Amini-Holmes plans to take time off to work on a book of her own, “Wolfsong,” her spin on a folktale about an orphan girl who befriends a lone wolf separated from the pack.

The Past, Present & Future of Car Design

Illustration Alumna to Join Art U News for...

How Trying New Things Paved the Way for...

Animation Alumni to Join Art U News on...

Snapshots of the Future