“If you could take all the words in the language, it still wouldn’t describe how much I love you. I love you more than everything,” David Sheff says to his young son Nic in the new drama “Beautiful Boy,” directed by Felix van Groeningen (“Belgica”). This sentiment weaves throughout the emotionally gripping film, based on the memoirs “Beautiful Boy” and “Tweak” by David Sheff and Nic Sheff, respectively. The film raises the curtain on drug addiction and the harrowing effects it has on a family.

Nic Sheff (Timothée Chalamet, “Call Me By Your Name”) lives in the San Francisco Bay Area with his journalist father David (Steve Carell, “The Big Short”) and artist stepmother Karen (Maura Tierney, “The Affair”), where he surfs with his dad, speaks French with Karen, dotes on his younger siblings and does exceedingly well in school. He spends summers and holidays with his mom Vicki (Amy Ryan, “Gone Baby Gone”) in Los Angeles. On the outside, Nic seems like your average teenager, but an inner-turmoil leads him to experiment with drugs, where he eventually tries and becomes addicted to crystal meth. From there, life begins to come undone, not only for Nic but also for those closest to him. 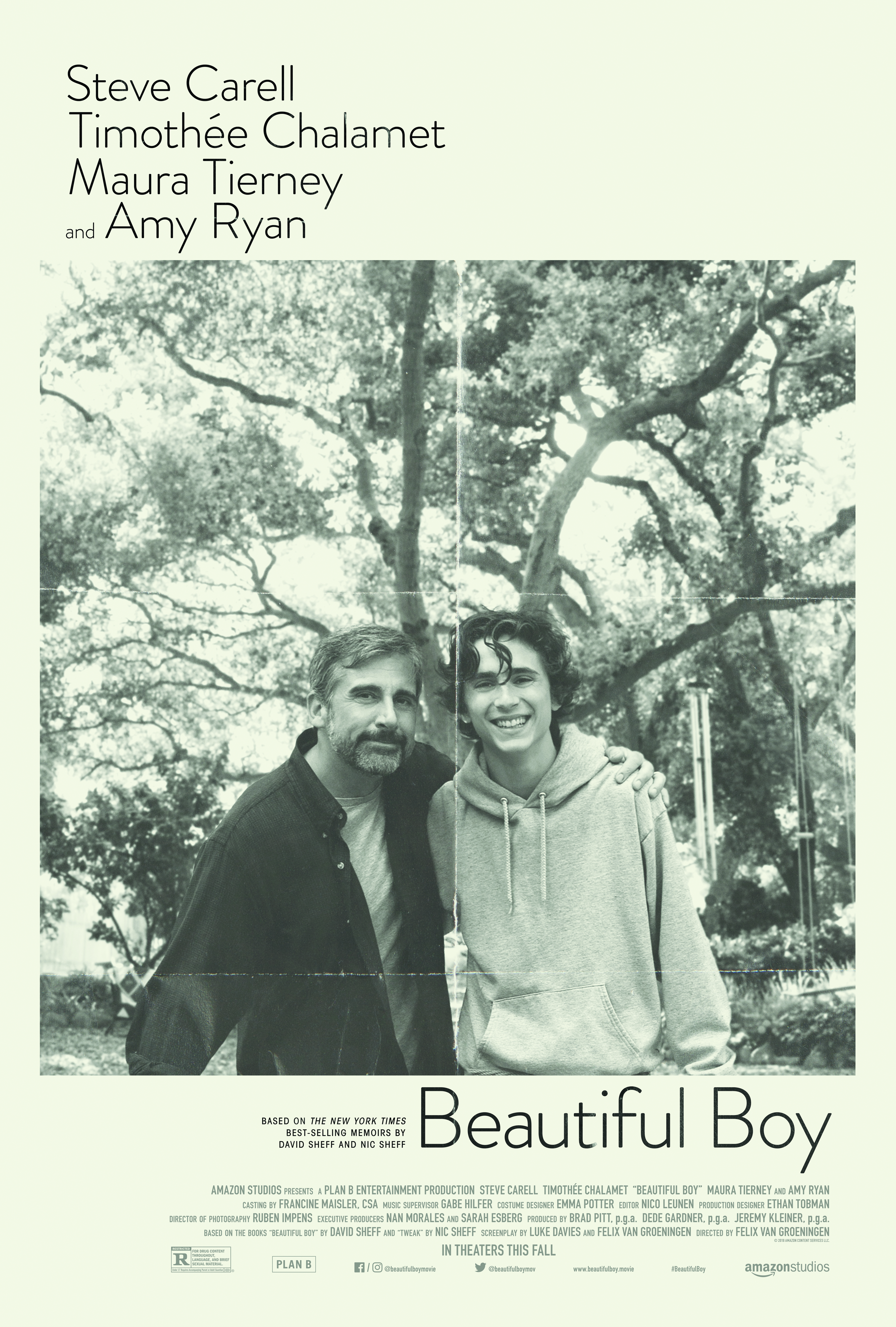 Van Groeningen doesn’t hold back when it comes to depicting Nic’s drug use on screen. So when he relapses, it feels like an absolute punch in the gut, especially while the audience watches David hopelessly try to figure out a way to save his son.

The tension between father and son builds throughout the film, occasionally spilling out directly towards one another. In an early scene, David confronts Nic while visiting him at rehab with Karen about the extent of his drug use. From Carell’s tone of voice, filled with frustration, bordering on exasperation, to the mix of genuine concern and confusion on his face as his character questions his son, while heart-wrenching to watch, is quite possibly the finest acting of Carell’s career. Chalamet answers the bell, as Nic tearfully explains the lure of meth to his dad: “When I tried it, I felt better than I ever had, so I kept on doing it.”

The film’s strength lies within the raw emotion portrayed by its actors and is exemplified in their shared screen time. When David and a ghostly pale and disheveled Nic meet at a quiet cafe in the city, this time it’s Nic who unloads on his dad after David reveals that he’s been researching addiction. Carell and Chalamet truly elevate one another’s performances and deliver a memorable, yet devastating, scene that feels honest.

The only real qualm to be made with the film was the way in which van Groeningen chose to unfold the narrative. The time-jumps sometimes cause confusion as to when certain events take place. When you have a film with such stellar performances, one can’t help but wonder if a more linear approach would have allowed his stars to shine even brighter.

That said, “Beautiful Boy” is a moving portrait of a father and son as they endure the many struggles of addiction in a way that’s forthright and, most importantly, has the potential to help create a much-needed dialogue.

Film Review: “A Beautiful Day in the...

Making it in VFX